On the heels of a turbulent start to the 2020 trading year, this is what has investors across the globe worried.

No Alternative
January 25 (King World News) – Ole Hansen, Head of Commodity Strategy at Saxo Bank:  While global stocks, led by the U.S., continue to be bought by TINA or “There Is No Alternative”, the commodity sector has been anything but calm during the first weeks of 2020. So far, the sector has already experienced three major price moving events/developments. Middle East tensions were followed by optimism, then skepticism towards the actual impact of the U.S.-China trade deal. Finally, this past week the market has been dealing with the prospect of another China-born virus raising concerns about its impact on the global economy.

Coronavirus
The outbreak of the coronavirus in the Chinese city of Wuhan brought back memories of the SARS outbreak in China in 2001. Before being contained, it had killed hundreds and hit the Asian economies hard as business and consumer demand plummeted. The timing could not have been any worse with the outbreak occurring days before the beginning of the Chinese New Year when hundreds of millions of workers travel home to visit their families. With several cities in lockdown and many events cancelled, the Chinese economy is likely to take an economic hit during the first quarter.

Commodities
Commodities such as copper and crude oil, both exposed to Chinese demand, took a tumble. Both gave back most of the strong gains seen during December when the focus on a U.S.-China trade deal and OPEC+ production cuts boosted both markets. Copper’s weekly fall towards support $2.685/lb was the biggest since 2018 while crude oil continued its longest losing streak since last May. 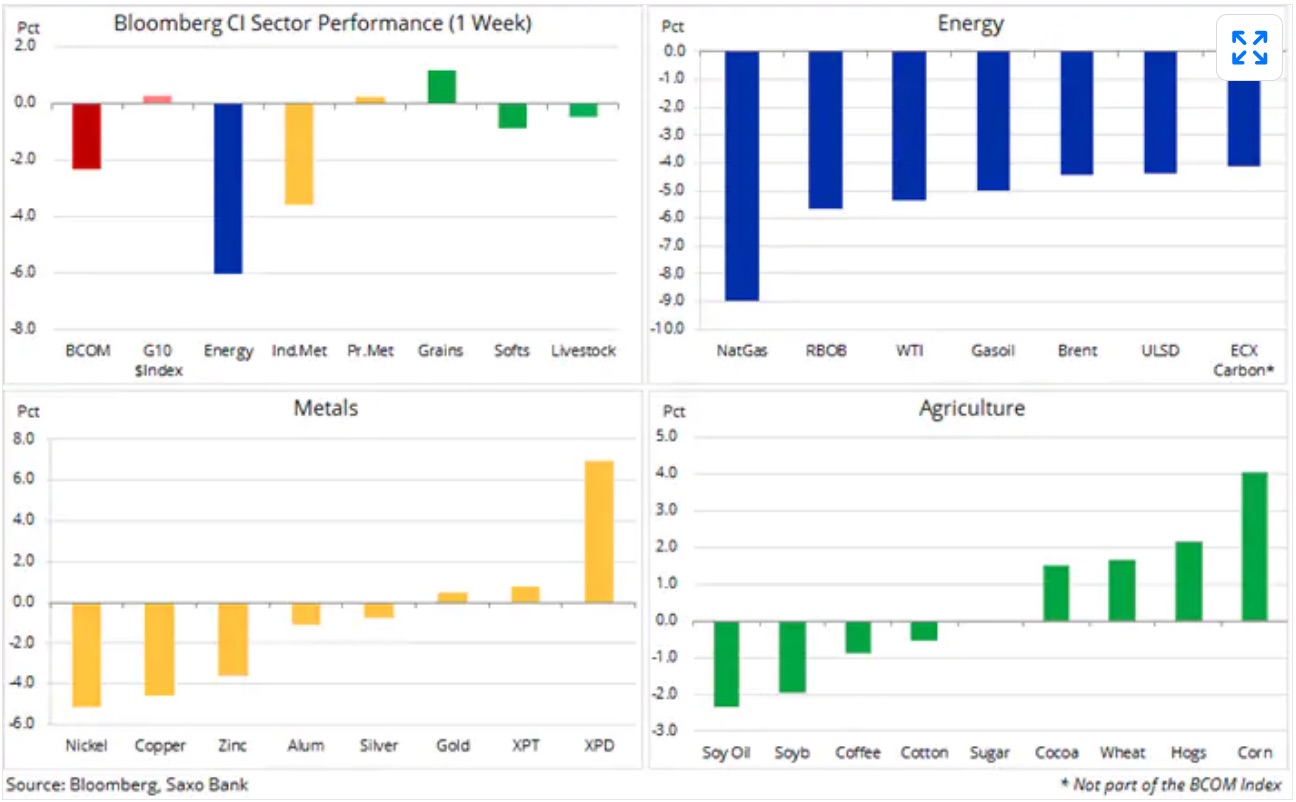 Expect $1,625 Gold
Gold has settled into a range around last year’s high at $1555/oz. The virus threat and lower bond yields both helping to offset the headwinds from a stronger dollar. In our quarterly outlook out this week we wrote the following about gold: “After racing higher at the beginning of January, we may see the metal spend most of the first quarter consolidating above $1500/oz before moving higher to reach $1625/oz later in the year”.

Copper
HG copper headed for its biggest weekly loss since 2018 on growing concerns that the deadly virus spreading from China could negatively impact the fragile recovery seen across major economies in recent months. Copper has traded within an uptrend since October when China and the U.S. began raising the prospect of a trade deal. The deal, which hinges on a dramatic pickup in the Chinese buying of US energy and agriculture products, could now with the latest developments be thrown further into doubt.

From a technical perspective the next major level of support for HG copper is located at $2.685/lb followed by $2.64/lb. 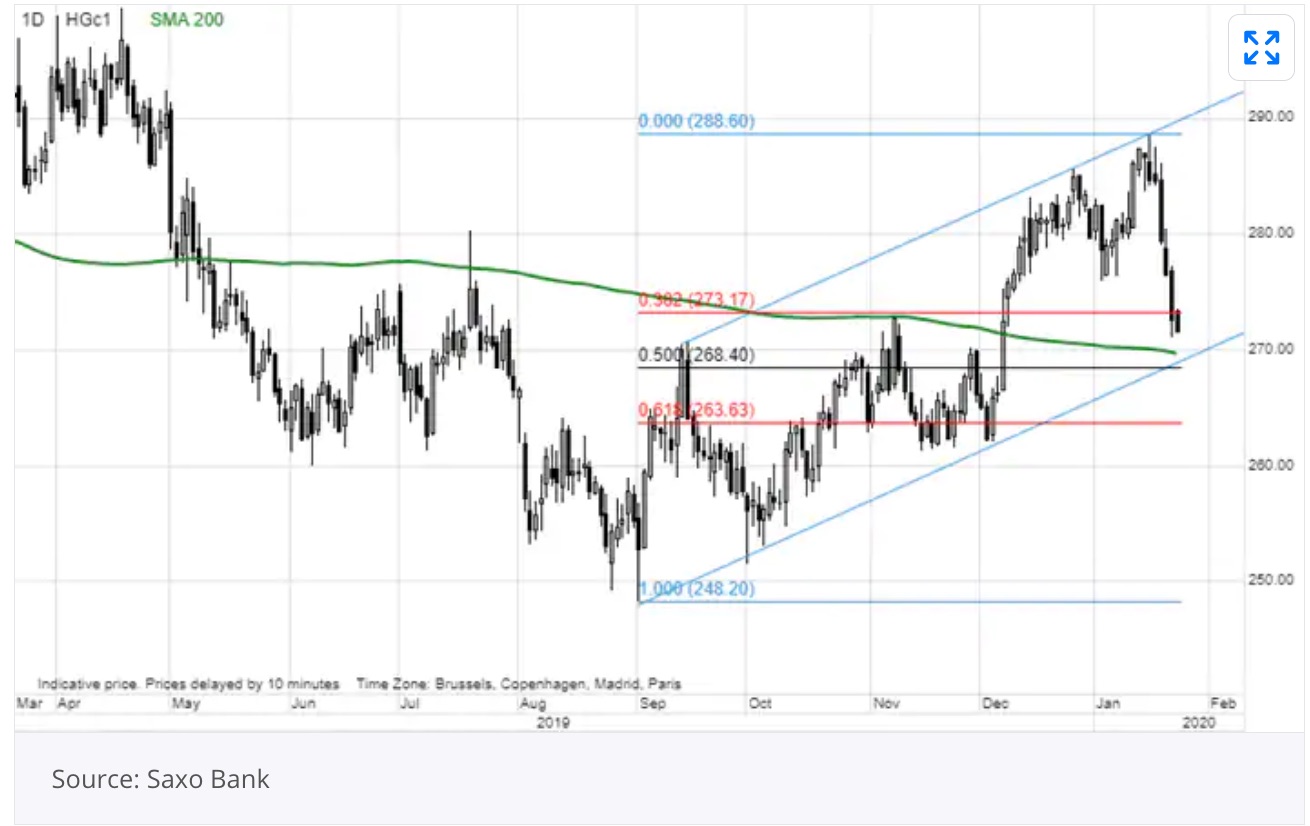 Crude Oil
Crude oil began the week worrying about another potential big drop in supply – this time from Libya where worries over another Syria-type scenario have risen with outside powers supporting rival armed fractions. However, at a peace summit in Berlin, German Chancellor Merkel announced that countries with interests in Libya had agreed to provide no further military support while the ceasefire lasts.

In Tripoli the UN-recognized executive authority is backed by powerful militias and interest groups, mainly in the west of the country, as well as Turkey and Qatar. The east of the country is controlled by General Khalifa Haftar who heads the Libyan National Army and is supported by Egypt, the United Arab Emirates, Saudi Arabia, Jordan and at times, France and Russia.

The short-lived rally in crude oil at the beginning of the week was halted once the impact of the coronavirus emerged. Adding to the subsequent sell-off was the need from speculators to exit longs that had been accumulated during December’s strong rally. In Brent alone the build in speculative longs during this time amounted to almost a quarter of a billion barrels.

Selling accelerated once $64/b gave way but with geopolitical risks still a significant factor, we see the downside limited to $60/b. 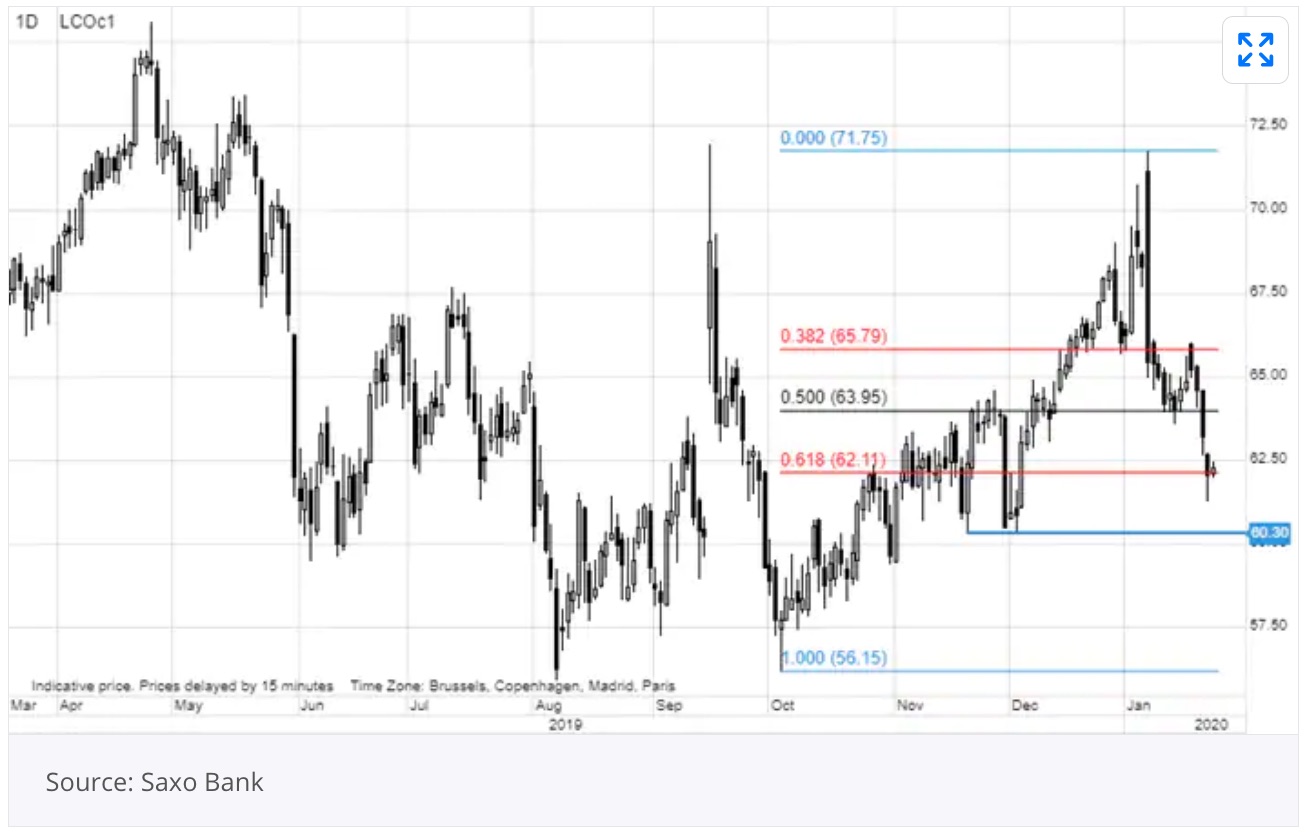 Whether we get that low depends on further news from China and whether speculators have reduced positions to a more comfortable exposure. Given the latest developments and crude oil’s inability to find support from geopolitical worries the OPEC+ group will be forced to extent production cuts beyond March. Until either demand picks up or non-OPEC production fails to deliver the expected barrels.

Summary:
The outbreak of the coronavirus in the Chinese city of Wuhan added another layer of uncertainty to what has already been a volatile month. Commodities such as copper and crude oil, both exposed to Chinese demand, took a tumble. Both gave back most of the strong gains seen during December when the focus on a U.S.-China trade deal and OPEC+ production cuts boosted both markets.

This Will Take Gold Above $20,000
ALSO RELEASED: Stephen Leeb – This Is What Will Take The Price Of Gold Above  CLICK HERE TO READ.