As we kick off the fourth week of trading in November, this is the real reason why the public is broke and the middle class is being destroyed.

James Turk:  “It is good to see gold and silver starting the week in a positive way with their prices stabilizing, Eric. When you look at the recent dip in prices, it’s been a rough couple of weeks. But then again, when you see distortions like backwardation in the market, it is a good time to buy…

I have been expecting to see strength in the precious metals as we work toward the end of the year. It’s always impossible to predict when the short-term trend will turn, but it is time for a short-term trend reversal. This week often sees them.

With the US celebrating Thanksgiving on Thursday, there are only three days of trading. So look for short covering and buying by bargain hunters to take the precious metals higher this week. In fact, with today’s action, I expect that both gold and silver are now beginning the long road back to higher prices. As they do so, gold and silver will simply be resuming this year’s uptrend.

After a couple of weeks like we just had, it is easy to lose sight that gold and silver are up 14% and 20% respectively year-to-date. Owning physical gold and physical silver allows everyone over the long-term to keep their head above water, which is not easy to do as the dollar and other currencies continue to lose purchasing power.

Part of the problem, Eric, is that it is hard to see how badly currencies are doing. It is a natural tendency to focus on the short-term, so it is easy to lose sight of the long-term. To illustrate this point, I was reading the latest report of ShadowStats.com, and this chart literally jumped off the page when I saw it. It is very revealing. 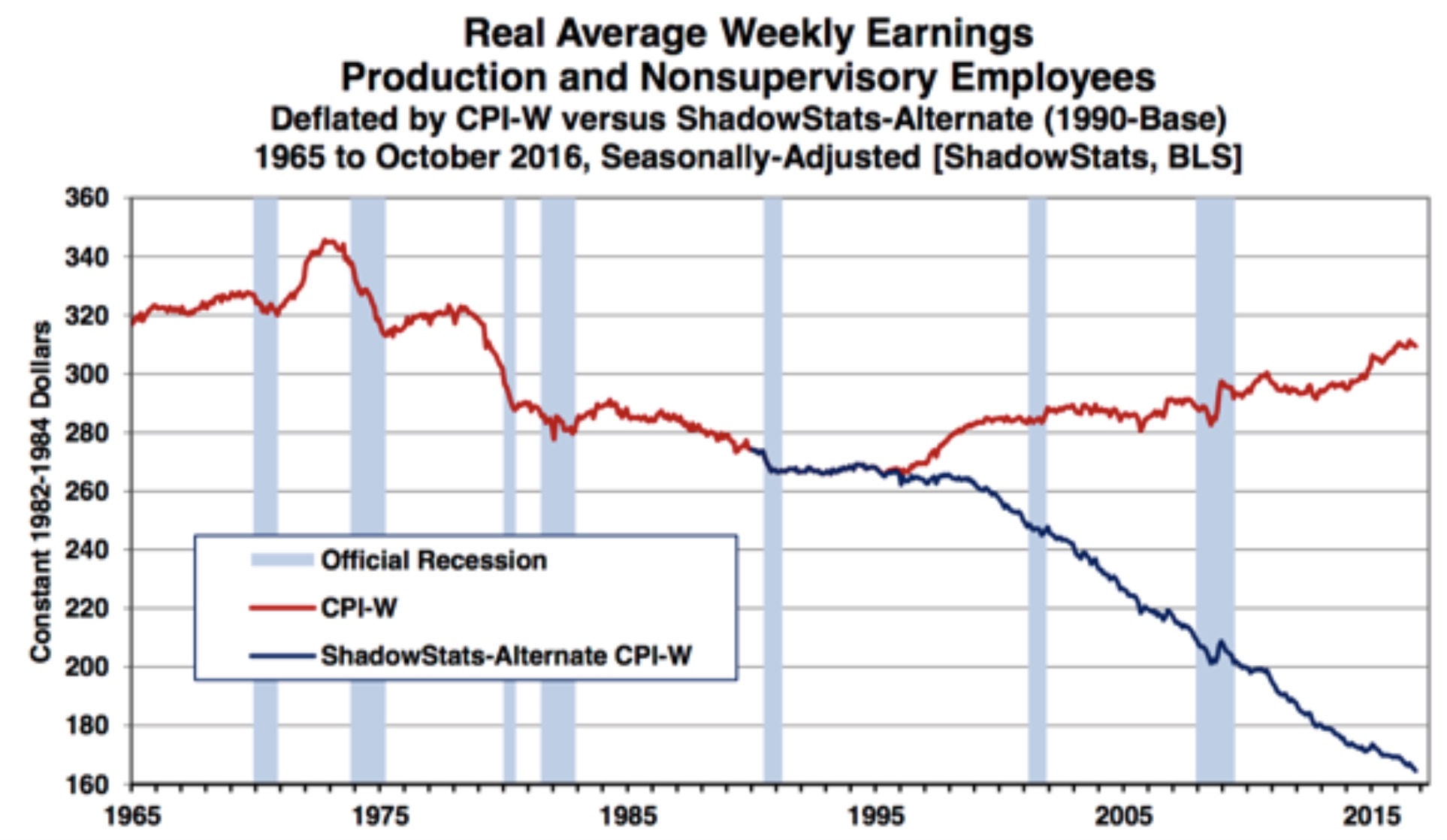 It shows that even by the government’s own measure, wages are below where they were in the 1960s and 1970s. People’s standards of living are not improving.

Williams Exposes How The Middle Class Is Being Systematically Destroyed
The blue line is calculated by ShadowStats, using the CPU formula used by the federal government in 1990. It shows what is really happening to wages and the purchasing power of the dollar.

The big difference in these two lines results from the changes the federal government made to the CPI formula. The cumulative effect of these changes have made US dollar inflation look much smaller than it really is.

When looking at a chart like this, it is little wonder why Trump won. This chart also makes clear why it is foolhardy to rely on government statistics. It also shows why owning gold is important.

***ALSO JUST RELEASED:  Are You Prepared For The Unwinding Of The Biggest Bubble In History? CLCK HERE.