This is the real reason why gold and silver are moving higher today.

By Peter Boockvar, author of the Boock Report
January 4 (King World News) – Here is what Peter Boockvar wrote as the world awaits the next round of monetary madness:  I’m going to harp again today on my belief that higher cyclical inflation is a VERY underappreciated risk in 2018 and pressures are continuing to grow. If you missed the comments yesterday in the Markit press release on US manufacturing it said this: “input price pressures intensified with the rate of cost inflation accelerating for the 2nd consecutive month. Furthermore, the marked rate of increase was the 2nd fastest since December 2013…

Panelists linked rises to higher raw material prices, which partly stemmed from supplier delays. Meanwhile, factory gate charges rose solidly, despite the rate of inflation softening since November.” In yesterday’s front page of the WSJ: “Sluggish Wages See Uptick…Pay is rising at double the national average in metro areas with low unemployment.” On page 2, “Minimum Wage to Rise in 18 States.” The CRB commodity index closed yesterday within one point of the highest level since November 2015. There was also a reaction in the TIPS market. The 5 yr inflation breakeven closed up more than 2 bps to 1.90%, the highest in 9 months. The 10 yr breakeven is now back above 2% for the first time since the end of March.

It is not just in the US and a point I’ve been making for the past month. Did you see last week what the Japanese 10 yr inflation breakeven did after inflation printed above expectations on Christmas Day? On December 22nd, the 10 yr Japanese inflation breakeven was at .49%. On the last trading day of 2017 it closed at .60%. The German 10 yr breakeven today is at 1.32%, the highest level in 11 months. Yesterday’s Eurozone manufacturing PMI said “December saw rates of inflation in output prices and input costs remain elevated, despite slowing slightly since November. Part of the increase in purchase prices reflected ongoing supply chain pressures, with average vendor lead times lengthening to one of the greatest extents on record. All of the nations covered reported increases in input costs.” 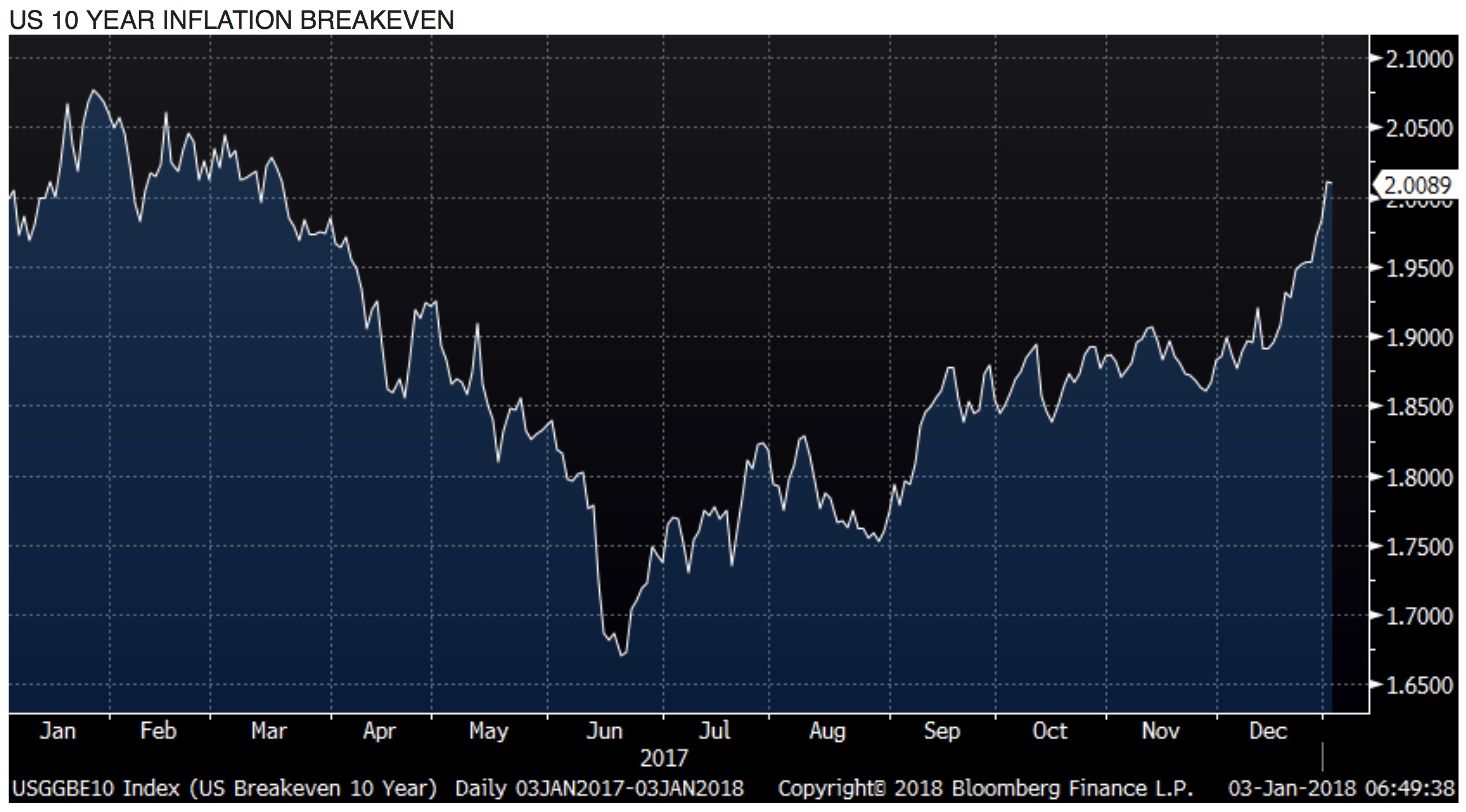 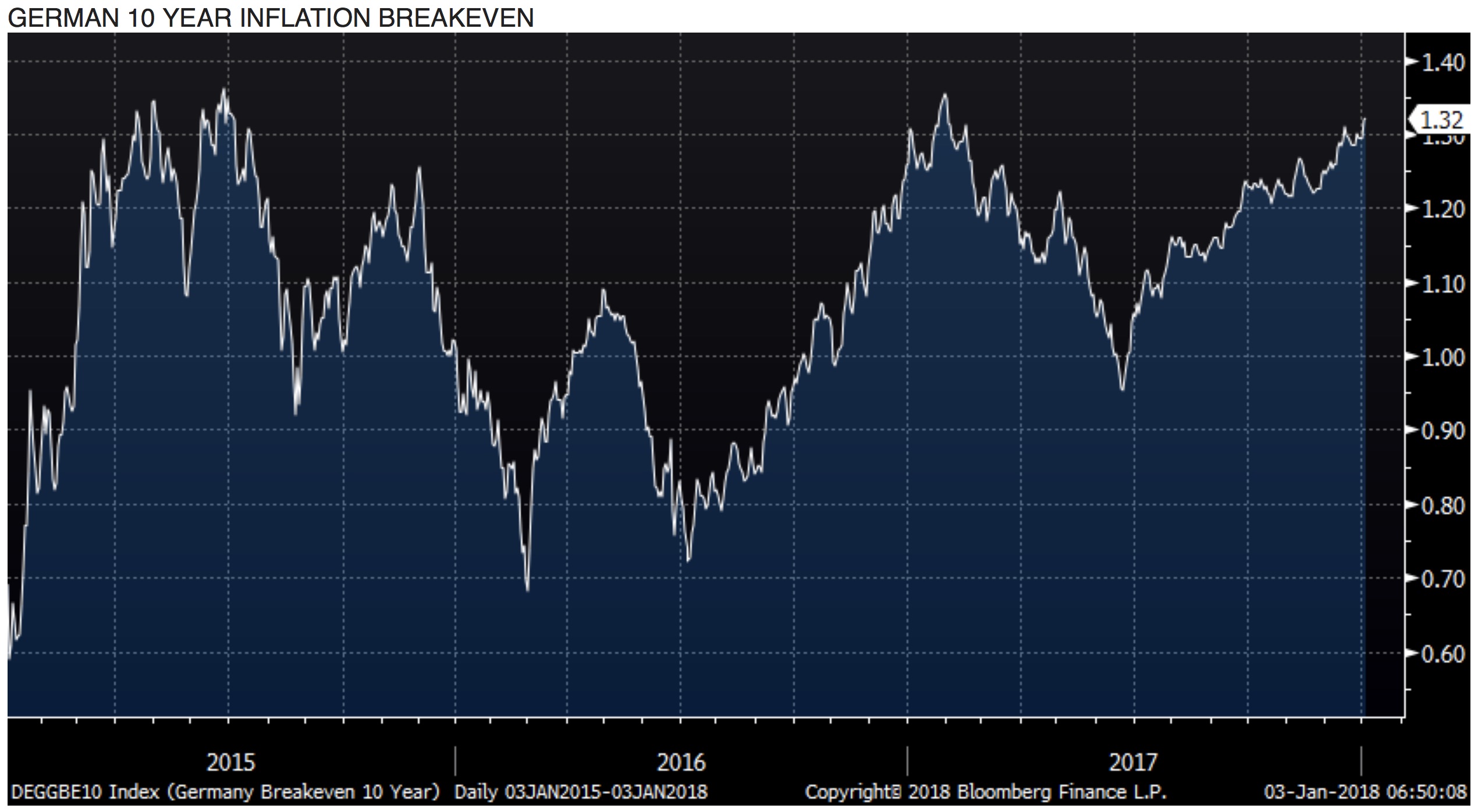 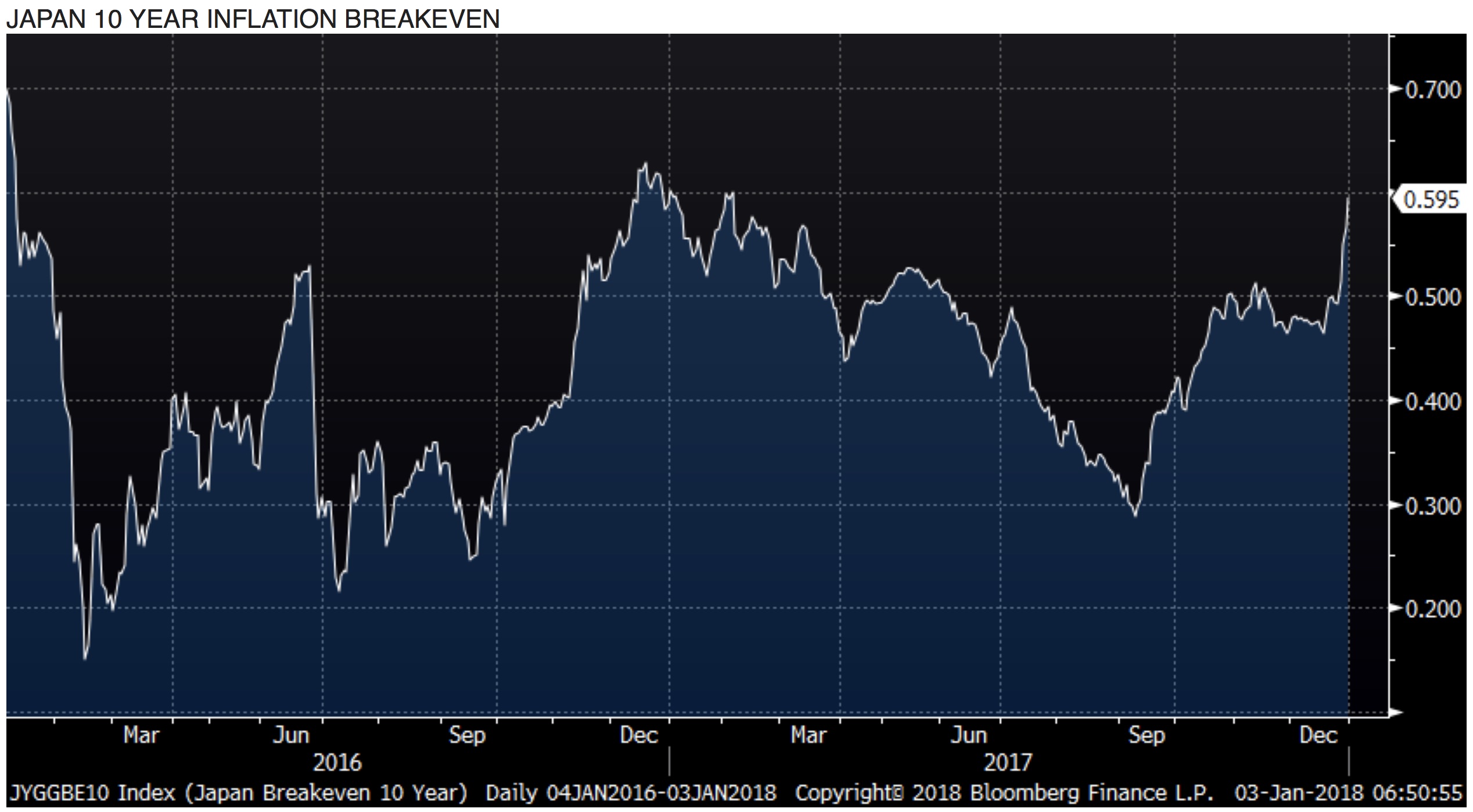 I mentioned this comment on China yesterday from Markit, “Average input costs continued to rise sharply, despite the rate of inflation softening to a 4 month low. Anecdotal evidence indicated that higher costs for a variety of raw materials drove up cost burdens. Consequently, firms increased their selling prices solidly.”

Trouble For Bonds & Greater Than Expected Rise In Inflation
In the context of the global bond bubble with still about $10 Trillion of negative yielding paper and central bank tightening accelerating in 2018, let’s all hope that these inflation pressures recede and/or are offset by a rise in productivity. I am growing more worried about global bond markets and a greater than expected rise in interest rates.

King World News note:  If Boockvar is correct and we see an unexpected spike in global inflation, this will be incredibly bullish for gold, silver, and the high-quality companies that mine the metals.  That would also mean that 2018 will be a big year for gold and silver, which is taking place directly after one of the greatest capitulations and increase in bearishness that the metals markets have ever seen.

***To listen to Michael Belkin discuss what other market shocks and surprises to expect in 2018 as well as why gold and silver are set for a massive surge in the coming year CLICK HERE OR ON THE IMAGE BELOW.

Greyerz – We Are A Whisper Away From World War III