On the heels of a wild trading week that saw a plunge in bonds and the U.S. dollar, gold surge, and whipsaw trading in stocks, today one of the top economists in the world sent King World News an incredibly powerful piece warning about a nightmare that no one is talking about that ignited this week’s panic in global markets.  Below is the fantastic piece from Michael Pento.

The European Central Bank under the auspices of Mario Draghi has created a market-destabilizing condition known as the euro carry trade. Draghi recently telegraphed to the markets a more aggressive attack on the value of the currency heading into the ECB meeting held December 3. In fact, he went on record saying the ECB’s imperative is to “do what we must to create inflation as quickly as possible.”

Because Draghi promised to destroy the euro at an even quicker pace than it was already falling, financial institutions front-ran the ECB’s increased bid for bonds and equities, sending these prices soaring in the weeks prior to the meeting…

Michael Pento continues:  The euro carry trade was in full swing. These banks and hedge funds also borrowed euros and bought higher-yielding dollar-denominated assets. And the falling euro furthermore served as a green light to sell short most commodities, including precious metals.

A great example of how the euro carry trade works can be found in the market for U.S. Treasuries. In the weeks leading to the December 3 ECB meeting, the U.S. 10-year note yield fell from 2.88 percent on November 9 all the way down to 2.26 percent on December 2nd as traders sold euros and bid up Treasury prices. The trade was a double win because Treasuries offered a higher yield than European bonds and were denominated in a rising currency. European traders could earn more income on their money while benefitting from an improving currency translation. 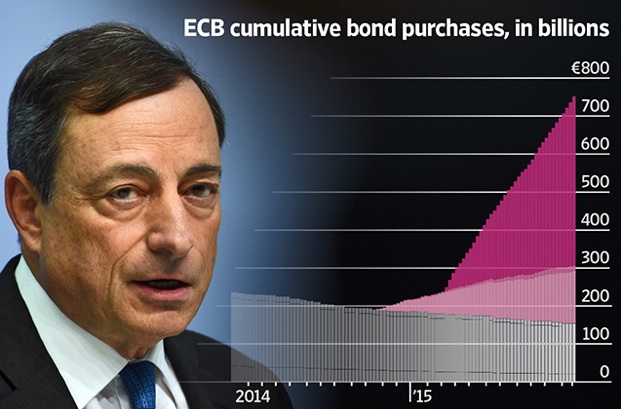 The Carry Trade Nightmare
But Draghi threw a wrench into this carry trade when traders became disappointed with the outcome of the meeting. The ECB did not increase monthly QE purchases as was highly anticipated. Draghi kept the level of monthly purchases at 60 billion euros. However, he did extend the program by six months and lowered the deposit rate by 10 basis points. This caused the euro to soar against most major currencies and sent carry trade speculators scrambling to sell bonds and stocks, and then sell dollars to cover their short euro position.

Of course only in the twilight zone of today’s fiat currency system would a cut in the deposit rate to -0.3 percent and an extension of QE by another 360 billion euros cause a currency to rise. But this illustrates how much the ECB overpromised on its efforts to create inflation. The markets simply became overextended in driving up the dollar and stocks and bonds.

Therefore, immediately after the ECB announcement the German DAX dropped 400 points (more than 3.5 percent) and the U.S. market reaction was volatile as well, with the Dow Jones shedding more than 1.4 percent by the close after falling more 300 points earlier in the day. U.S. Treasuries also reacted violently, as 10-year note prices plunged, sending the yield soaring higher by 7 percent on Thursday. The German 10-year bund yield soared as high as 0.59 percent from the low of 0.45 percent, and two-year bond yields in Spain and Italy leapt from negative into positive territory.

This Week’s Chaos Just A Taste Of What Is To Come
This is just a taste of what is to come. The simple truth is that currencies, bonds, and equities have all been so massively manipulated by the heavy hand of government that there is now no easy escape. This week was a great example of the unintended and baneful consequences that result from abrogating markets in favor of global central planning. ***To listen to billionaire Eric Sprott discuss this week’s panicked trading and what’s directly ahead, you can listen to his extraordinary KWN audio interview by CLICKING HERE OR ON THE IMAGE BELOW.