With many people watching the tumble in the gold market, this is how we will know the price of gold has bottomed.

This Is How Gold Will Bottom
February 4 (King World News) – Fred Hickey:  “US dollar rally” is the explanation pundits use to explain gold sell-off. Reality: gold soared to record highs in early August and we’re now in an extended correction. Dollar FELL throughout this 5-mo. gold correction. Gold correction from the record highs has to run its course.

What I’m Looking For
Gold correction will end once enough of the week-kneed (who are still hanging on) finally punt on gold. We’re getting closer. Reality is this is just a correction in a major bull with conditions ripe for much higher levels: deeply negative real rates, a bout of inflation ahead.

Despair and fears of deeper losses. It’s what I’m looking for – we need more of it for a bottom…

Gold Testing a Pivotal Support Range
Top Citi analyst Tom Fitzpatrick:  After gold recently completed a small double top formation that targets a move to $1788, it has drifted lower to test the pivotal support range at $1791-$1811, which includes:

If we see a daily close below this range, we should expect a further decline towards the next good support range at $1765 (May 2020 high and Nov 2020 low.) 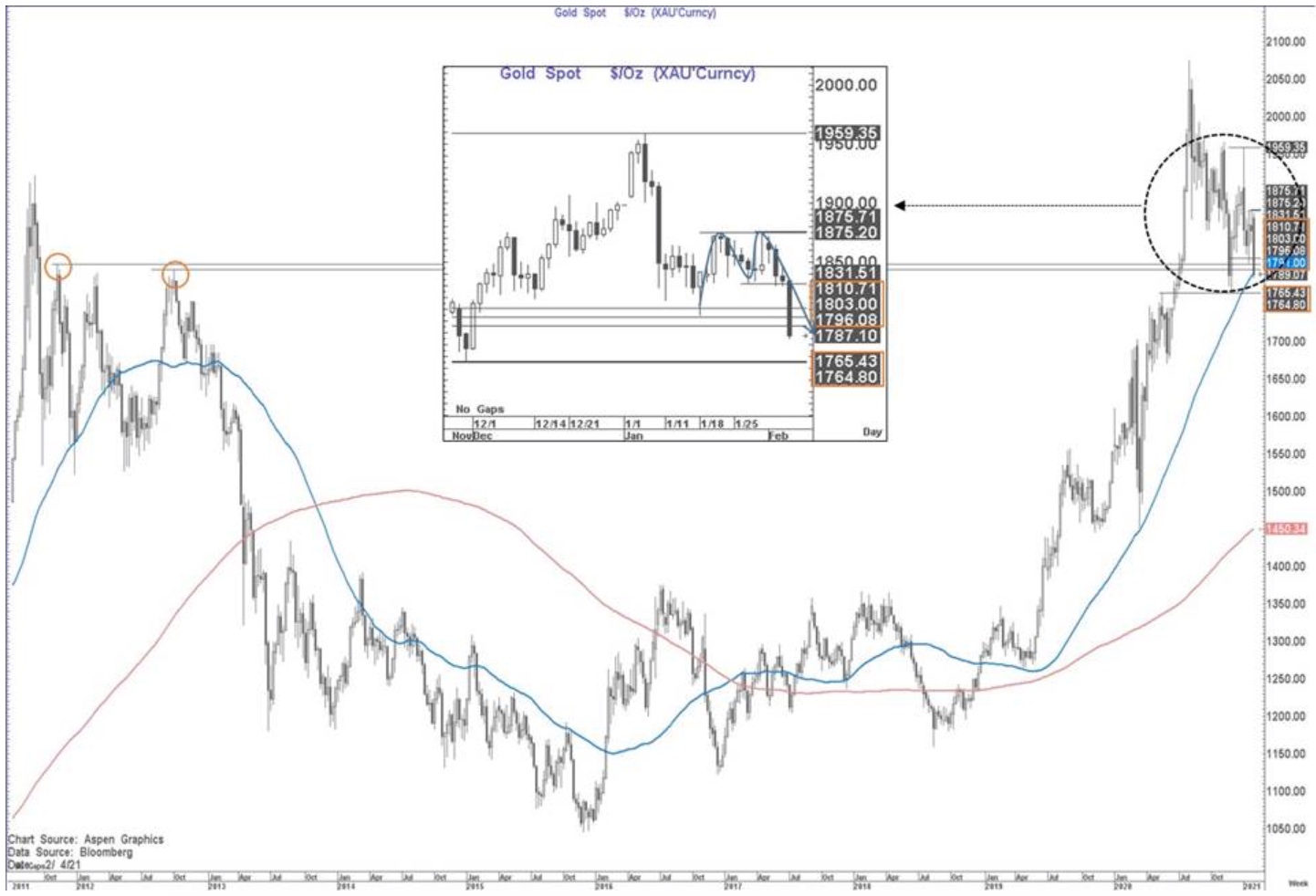 Note that a weekly close below this range would paint a much more bearish picture on the precious metal given the 55-200 week MA set up. However, for now, we should focus on how it trades around the big support range and come back to reexamine if we get that weekly close.

Maple Gold Mines Ltd. has closed its previously announced 50-50 joint venture transaction with Agnico Eagle Mines Ltd., which combines Maple Gold’s Douay project and Agnico’s Joutel project into a consolidated land package of approximately 400 square kilometres. The closing of the transaction follows the signing of a binding term sheet between Maple Gold and Agnico that was previously announced on Oct. 8, 2020.

“The closing of this transaction represents an exciting new chapter for Maple Gold as we move forward on the Douay project with the best joint venture partner we could ask for.

We are excited to kick off the JV’s maiden drill campaign shortly to expand the established gold resources at Douay and will continue to test regional targets for new discoveries, all with the aim of establishing an exciting new gold district in Quebec’s Abitibi gold belt.

We also look forward to building on our relationships with the local communities around the combined land package, including the first nations.” — Matthew Hornor, CEO of Maple Gold

Below is a short video update

Is This Surprise Setting The Stage For A Massive Rally In Gold, Silver & Commodities?