COLLAPSE CONTINUES: For The First Time In History US Treasury Rates Are Negative!

On the heels of the Dow tumbling 2,000 points and the price of crude oil plunging $5 to $21 a barrel, it has finally happened — we now have negative Treasury rates in the United States!

They’re Here: US Rates Go Negative
March 18 (King World News) – Jeff Snider at Alhambra Partners:  Negative Treasury rates are here. The front end of the yield curve fell below zero for the first time, the equivalent yield for the 4-week T-bill at -0.025% as I write this. The benchmark 3-month yield is straddling zero (while 3-month LIBOR jumps, as noted yesterday). These are not surprising developments. They are to Jay Powell and the people who still listen to him.

For almost two years, we kept hearing about how there had to be “too many” US Treasuries. Worse, the same people yelling about a surplus of them ended up blaming that very thing for many of the liquidity warnings that had almost regularly defaced the supposedly booming economy of 2018 and 2019.

The Curves Don’t Lie
The curves, however, didn’t lie. They were telling you about liquidity risks and more than that pointing you in the direction of the actual concern. The FOMC dismissed the “strong worldwide demand for safe assets” but the market simply couldn’t. Everyone probably wanted to, but there just wasn’t enough of them.

Rather than being “too many”, the increasing distortion to the yield curve has demonstrated there were never enough. It is true that the deficit-addicted US government has seemingly tried to alleviate the collateral shortage all on its own with its massive increase in issuance, but what does that say instead about how big of a repo problem this must now be?

The government blew out the deficit and massively increased the supply, especially of T-bills (the basis of the “too many” lie), and it still wasn’t enough! The bills are now first in the minus.

Over the past several dreadful weeks of liquidations the pattern has largely repeated. During the early morning hours, before regular trading opens, yesterday’s repo transactions are unwound. Under normal and even less-than-ideal conditions these are just rolled over.

Not any more. Collateral calls mean in some cases using gold as a last resort (which gets dumped immediately) and in others the buying of pristine collateral at any price. Gold is slammed while T-bill prices skyrocket, their yields plummet. For those unlucky enough to have neither option in front of them, fire sales of assets including stocks and other risk credits. 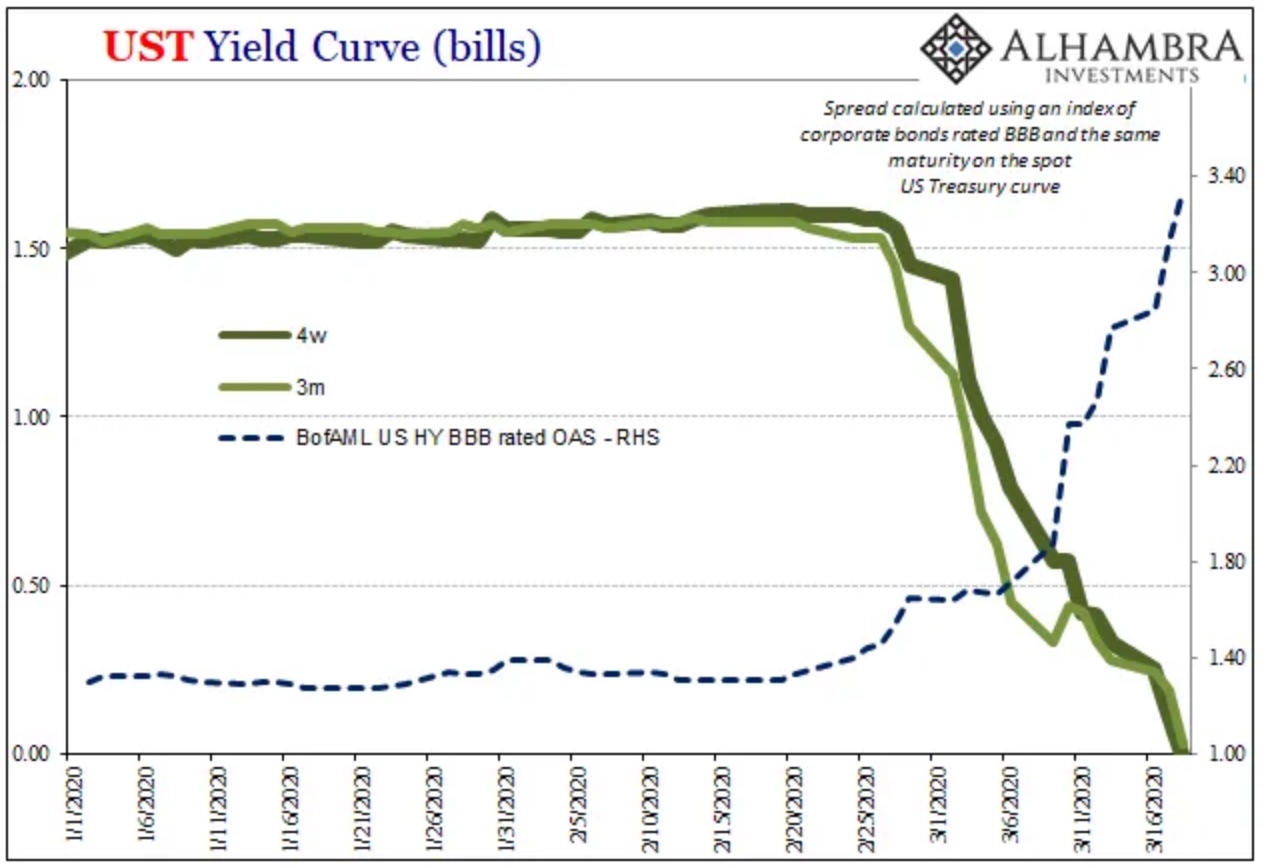 We saw this in each of the stock market’s worst days last week, and, for the record, it happened again this morning. Thus, negative bill rates.

Ever since the Fed announced, and conducted, its “massive” $500 billion “repo” operations, there’s been very light demand for them from the money dealers at the center of this monetary storm. Given these market fire sale conditions, obvious signs of gross systemic illiquidity, the Fed’s auctions should be bid full up to the limit each and every one. The demand for liquidity, any spare liquidity, is through the roof curiously everywhere except here.

The answer can only be collateral. In order to bid for the Fed’s bank reserves in any of these FRBNY operations, you have to post some of eligible MBS, agency debt, or UST’s. And when you do, whatever collateral you put up becomes encumbered (which means no repledging).

Dealers are obviously not doing so, and encumbrance is as likely a culprit as is the lack of spare collateral. If this is all new to you, I urge you to read my overview of this relatively unexplored yet central piece of the global monetary function, which includes explaining the utility of negative yielding instruments like T-bills. The intro is here, the diagramming here. To sum those up:

If only you had enough pristine collateral sitting idle on your balance sheet where you could substitute that unassailable security in repo and therefore maintain the funding you need in order to bury that illiquid monster somewhere on the balance sheet until the storm passes – and its value goes back to up to reflect a more reasonable and fundamental level. That substitution ability buys you the most valuable thing in a crisis – time.

The Illiquid Monster
The “illiquid monster” of GFC2, the bottleneck I’ve been writing about for years, is that class of risk corporate credits in CLO’s, leveraged loans, and other forms of junk (including and especially those issued in Eurobonds). Like the “toxic waste” of GFC1, subprime and other varieties of mortgage securities, corporate junk has become increasingly illiquid putting enormous strain on collateral chains – the very bottleneck dealers have been increasingly afraid of and hedging against as the lie of globally synchronized and too many Treasuries transformed into the reality of globally synchronized downturn and so obviously not enough collateral.

What are collateral chains? I urge you to read about repledging and collateral multiplication here. To sum this up:

Starting in 2016, however, things collateral-wise began to pick up for the first time. According to updated estimates from Manmohan Singh, the total volume of pledged collateral grew modestly from $5.8 trillion in 2015 to $6.1 trillion. But with the 2017 introduction of the slogan “globally synchronized growth” and consistent official emphasis on it, the aggregate exploded to $7.5 trillion – an increase of 23% for this money market that hadn’t really seen any kind of growth in nearly a decade.

The most worrisome part was this:

More importantly, I believe, the sourcing of collateral. The vast majority of it came from the “securities lending” side of things, $400 billion more in 2016 and 2017 compared to $200 billion due to hedge funds.

And those are estimates drawn only from visible sources (footnotes). Who knows what the real figure might be for the totality of global US$ shadow money, this eurodollar system. An enormous amount of pledged, repledged, and, at times, rehypothecated securities all predicated on the introduction of the worst kind of junk credits.

If the collateral multiplier is going in reverse, then that would place enormous pressure on what pristine collateral is available as well as liquidity across the entire global system. Collateral problems, the big ones, suck the liquidity out of the whole damn thing.

That’s why the Fed’s non-repo repo operations were never going to work, and why at the worst possible monetary moments it seemed no one wanted the Fed’s “money.” They’d rather hold the best collateral in their own reserve.

The PDCF will offer overnight and term funding with maturities up to 90 days and will be available on March 20, 2020. It will be in place for at least six months and may be extended as conditions warrant. Credit extended to primary dealers under this facility may be collateralized by a broad range of investment grade debt securities, including commercial paper and municipal bonds, and a broad range of equity securities. [emphasis added]

Yep, even the monetary wizards at the Fed, after watching a third of the stock market’s value get evaporated all while sitting there wondering how bazooka after bazooka could possibly have failed to stem the tide, they finally must’ve heard from enough dealers to figure out there was never, ever “too many” Treasuries.

The only “too much” during those years was talk of globally synchronized growth, which had led directly to too much junk and collateral multiplication

Will it work? Don’t hold your breath. The original version was announced on March 16, 2008, during the Bear Stearns fiasco. That’s the thing about these bureaucrats; they are always a day late while the eurodollar is short.

The facility remained open throughout the rest of GFC1, which means that it was there, ready and open, the entire time for Lehman, AIG, Wachovia, and the September/October 2008 meltdown and global sweeping liquidations. The PDCF like the dollar swaps, futile gestures for global eurodollar system inelasticity.

GFC1 and now GFC2. The “C” in both stands for crisis, but since these crises are collateral it’s the only part of this that works on more than one level. Negative bill yields have nothing to do with rate cuts or ZIRP.

Global Market Panic
To listen to legendary billionaire Pierre Lassonde discuss what he is doing with his own money right now, how the global panic will unfold as well where he believes the gold price is headed from here CLICK HERE OR ON THE IMAGE BELOW.