The price of gold is rallying today as a perfect storm continues to engulf global markets.

Rally Time
May 19 (King World News) – Otavio Costa:  The gold-to-S&P 500 ratio looks ripe for a significant breakout. We’ve been reducing our short positions and re-deploying the capital into miners. Time for a rally in precious metals from very oversold levels.

Time For A Rally In Gold And The Mining Stocks 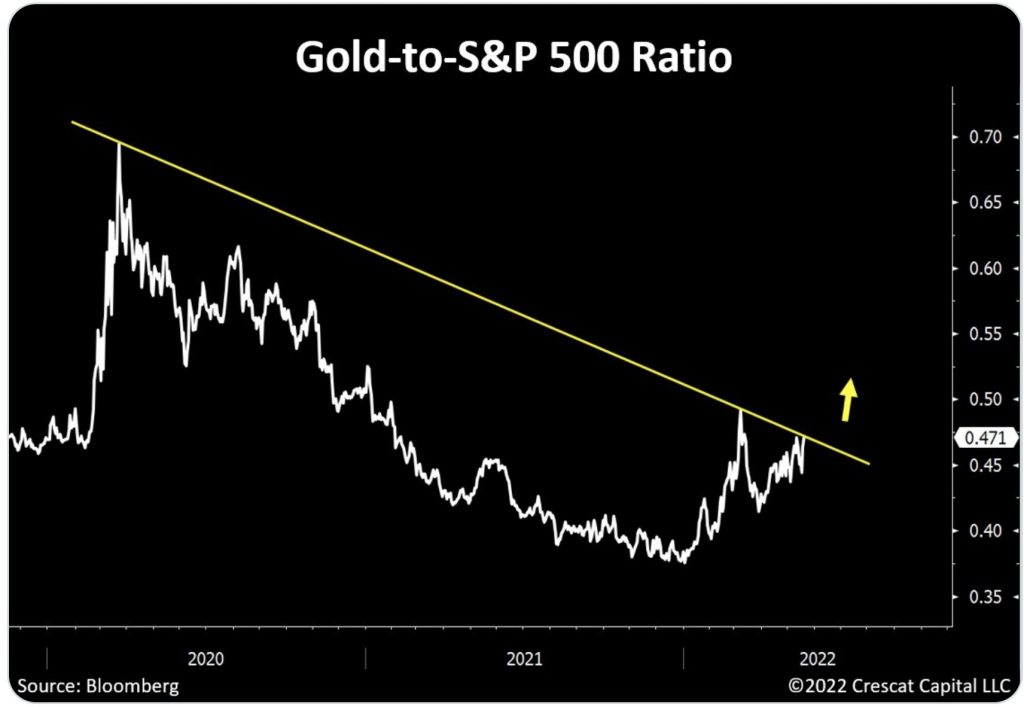 Perfect Storm
Peter Boockvar:  Walmart and Target made it a point to tell us their challenges are all below the revenue line and that demand is still good, albeit with a changing sales mix. Cisco told us last night that their profit issues are due to supply challenges that are impacting the top line and not due to any changes in end demand. As for the top line, “We continue to see strong demand resulting in record backlog” said Chuck Robbins, the CEO. But, “there were two anticipated events since our last earnings call, which impacted our Q3 revenue performance. The first is the war in Ukraine. This resulted in us ceasing operations in Russia and Belarus and had a corresponding revenue impact…The second relates to covid related lockdowns in China, which began in late March. These lockdowns resulted in an even more severe shortage of certain critical components. This in turn prevented us from shipping products to customers at the levels we originally anticipated headed in Q3.”

The Chuck Robbins bottom line, “We believe that our revenue performance in the upcoming quarters is less dependent on demand and more dependent on the supply availability in this increasingly complex environment…Customers are not signaling any real shift at this point. There’s no reflection of demand issues in our guidance.”

Mood Is Down
As measured by the two weekly market sentiment figures, the mood is still very down, not surprisingly. Investors Intelligence said Bulls rose a hair to 27.8 from 27.6 while Bears were up too to 43 from 40.8 and that is the highest since October 2011 when it got to 46.3 and around the time when S&P downgraded the US credit rating and stocks sold off almost 20% after the end of QE2. Today, AAII said Bulls rose 1.7 pts to 26, still low but off the multi year low of 15.8 five weeks ago. Bears also were up, by 1.4 pts to 50.4. It got as high as 59.4 three weeks ago. The AAII data does not include yesterday’s selloff but I believe captured the Tuesday rally.

Bottom line, in a bull market, extreme sentiment is always a great contra indicator when people get bearish and is a set up for a rally. In this bear market, the sour mood has been persistent and hasn’t helped at all in trying to time a market rebound. But that’s what happens in bear markets, oversold gets more oversold. That said, this level of bearishness can always lead to good bear market rallies.

After seeing the NY manufacturing index a few days ago go negative for the 2nd month in 3, the Philly manufacturing survey saw a drop to 2.6 from 17.6 and that was well below the estimate of 15. That’s the weakest print since May 2020 when it was deeply negative. 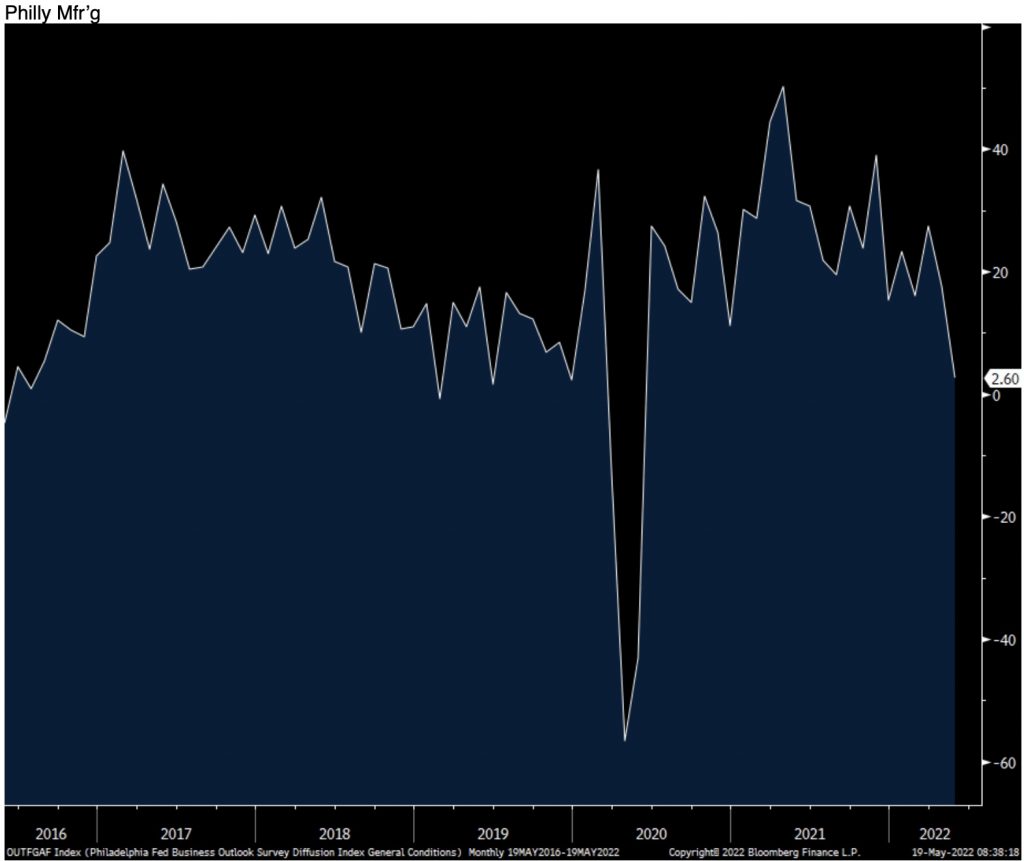 New orders rose to back above its 6 month average but only after declining by 8 pts last month. Backlogs were rose sharply but after dropping by more than 15 pts last month. Inventories fell after jumping last month. Employment fell to a one yr low and the workweek was down too. Delivery times were little changed but at the lowest since February 2021. Part of this is an easing of supply stresses but also a slow rate of imports from China because of their shutdowns. Prices paid and received moderated but remain above their 6 month averages.

Disappointing too in the overall data was the 6 month business outlook which fell to 2.5 from 8.2 and that is well below the 6 month average of 18.2 and at the lowest since December 2008 at the depths of the housing crash. 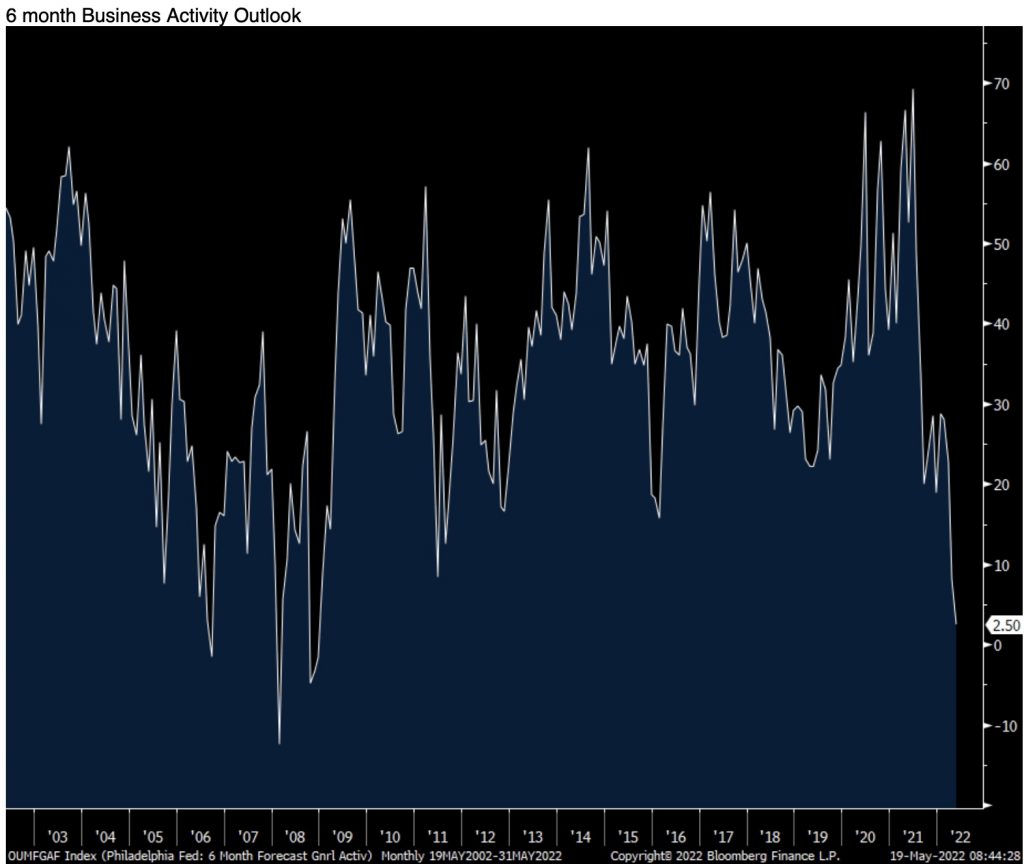 Capital spending plans dropped 10 pts to 9.6 and that is below the March 2020 covid low of 12. If companies feel pressures on earnings, they are naturally going to invest less in their business as there is less cash to go around.

Bottom line, the world’s economy is slowing, consumers are moderating their spending on goods at the same time product shortages still abound and that is all showing up in the two US manufacturing indices seen so far for May.