This is great for gold, plus look at 3 things hitting all-time record highs!

Stagflation Great For Gold
March 21 (King World News) – Fred Hickey:  Stagflation, as we last saw in the 70’s, is a poor environment for stock prices (but great for gold). The steep stock market rally last week was classic bear market rally action (in order to trap bulls again). Today’s selloff could herald the end of that rally… 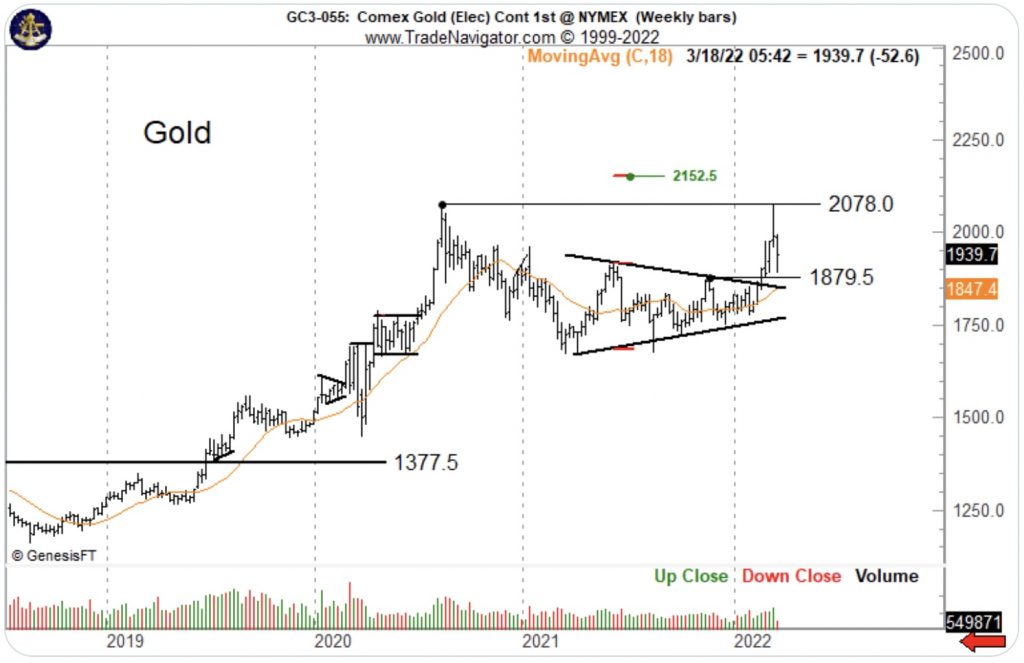 Commodities Inflation Causing Havoc Among The Leveraged
Gianluca:  Commodity trading houses have had to manage liquidity at current price by re-entering the market and upsizing their facilities. They are obviously under pressure and the bond market is repricing. Here you have the CDS of Louis Dreyfus, a trading house active in the agri space. 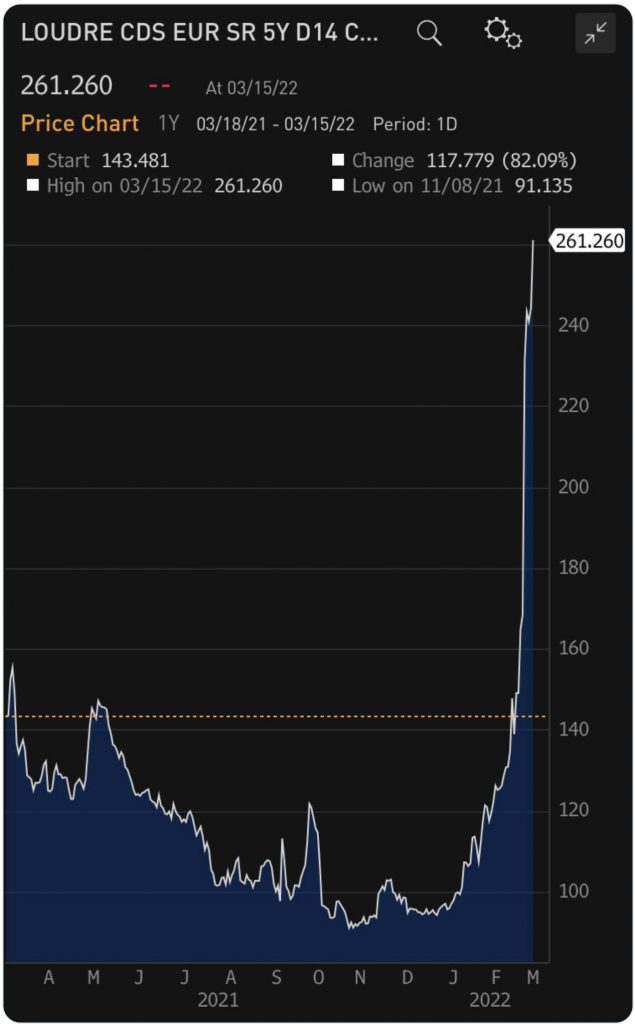 More “Transitory” Inflation
Peter Boockvar:  With Fed president Bullard the hawk outlier and Waller a notch or two down we have to assume the rest of the doves are likely more in line with what the short end of the bond market has already priced in, in terms of hikes, even now Kashkari who doesn’t vote anyway. Thus, whether the Fed hikes another 150-175 bps this year, and 50 bps at a meeting here or there, much has been reflected in short end bond pricing. What has not been priced in yet fully to stocks (maybe only partly), because we just don’t know yet, is the economic impact of this rate move as the economy responds gradually to the new reality. What has not been reflected I believe also is an aggressive pace of QT ($80-$100b per month which is likely) as until the liquidity flow starts to reverse, it’s hard to price in.

On the direction of the economy, the trajectory will slow, whether we technically see a recession or not, as consumers moderate the pace of discretionary spending as they have to pay up for necessities. Global trade is certainly going to slow for obvious reasons. The rate of change in government spending is for sure moderating from the aggressive pace of spend in 2020 and 2021. And residential and very likely commercial real estate will slow because of higher funding costs. The question then is what happens to capital spending and investment. If cash flow gets crimped, it will slow as well.

Thus, the yield curve is doing what should be expected here. If one looks at the OIS curve (overnight index swap), that reflects expectations for fed funds and the rest of the curve, the 2s/10s spread is just 5 bps. The 5s/30s has just started to invert with the 5 yr swap rate at 2.0% and the 30 yr at 1.98%.

Here is a fresh look at the broad commodity indices that I like to look at, the CRB raw industrials and the CRB food stuff indexes. The raw materials index closed at a fresh record high on Friday. 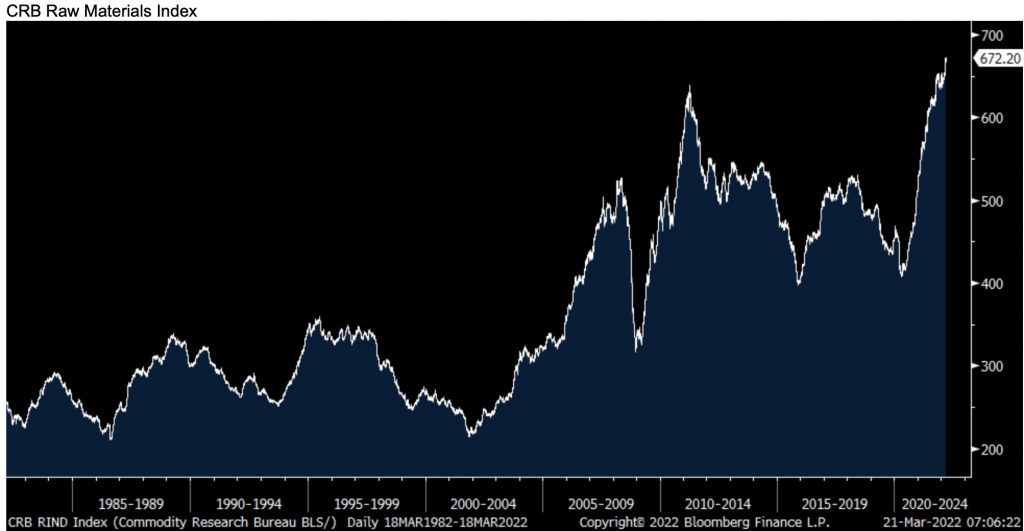 The CRB food index closed down Friday off its record high. 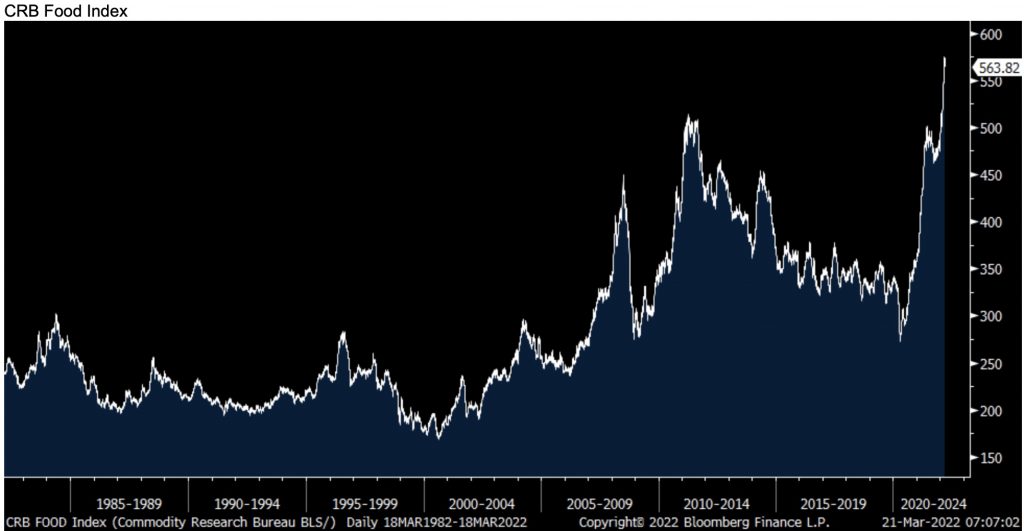 So many seem to be expecting China to cut rates to cushion their weakening economy (like pavlov’s dog, economy slows, give us lower interest rates) but they did not do anything last night, leaving their loan prime rate unchanged. A positive in China is if they are finally waking up to the futility of their covid approach which seems to be happening. Hong Kong made announcements last night that they are further cutting quarantine days to just 7 for incoming travelers and is ending incoming flight bans from 9 more countries. Shenzhen on the mainland also was quick to have its factories reopen. The world’s economy can certainly use more economic output from the 2nd largest component. I’ve said before, the world can also use the spending money of Chinese tourists, the largest cohort in the world that really has only allowed to travel domestically over the past two years.

As Christine Lagarde doesn’t see any signs of stagflation as she said today, Germany said its February PPI rose 25.9% y/o/y and by 1.4% m/o/m, although both were .3% less than expected. 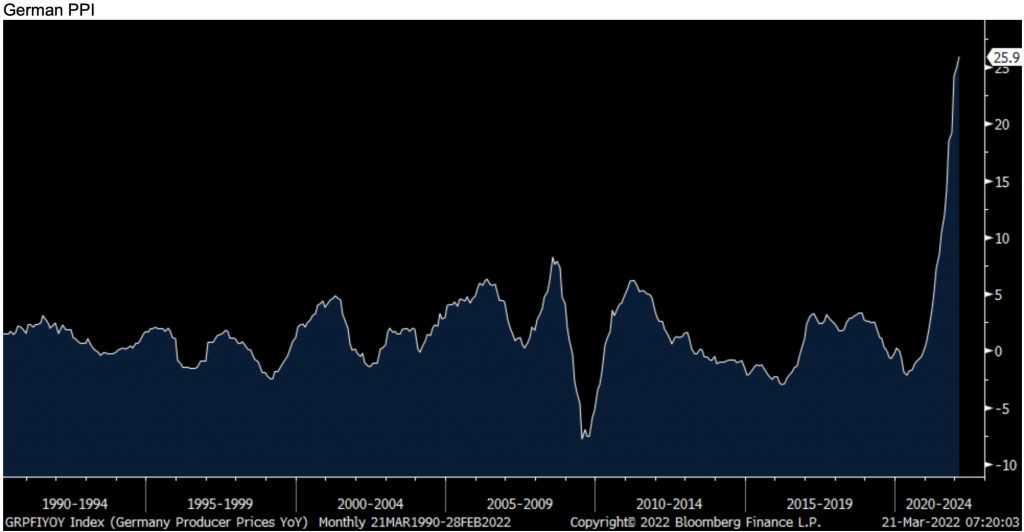 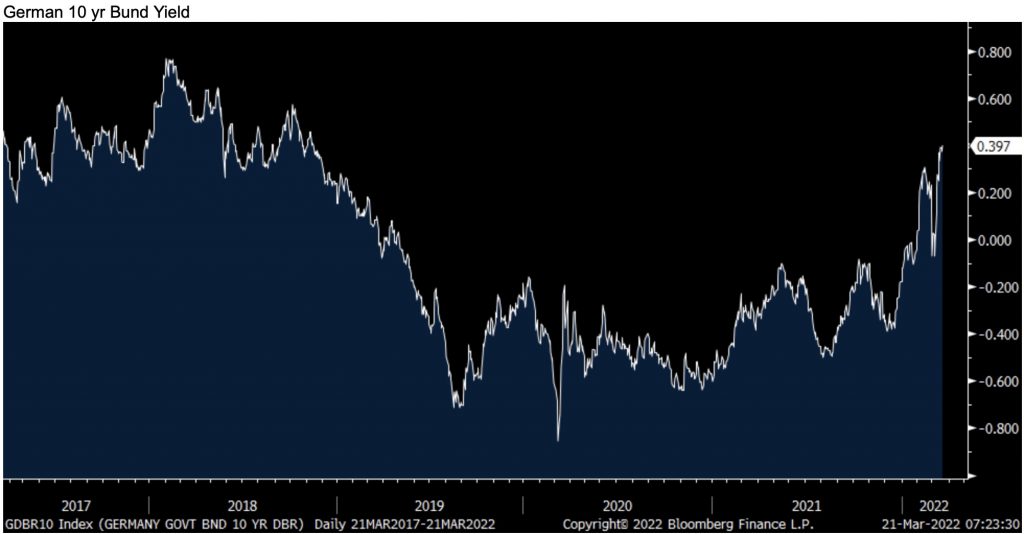 More Fed Propaganda
Just as the Fed with their economic projections included economic pixie dust that the fed funds rate can go from zero to about 2% this year and almost 3% next but the unemployment rate is magically going to stay around 3.5% over the next 3 years, Lagarde today said “even in the bleakest scenario, with 2nd round effects, with a boycott of gas and petrol and a worsening of the war that goes on for a long time – even in those scenarios we have 2.3% growth.” Pixie dust.

With Jay Powell having already spoken last week at the FOMC press conference, today’s prepared comments didn’t reveal anything new but he reminded everyone that a 50 bps rate hike at a meeting is not out of the question and he’d be willing to hike rates above what their economically driven models say the neutral rate it is. He also acknowledged the challenge of engineering a soft landing while being certainly hopeful that he can pull it off.

I’ll say again, as the Fed progresses down this path of both hiking rates (although already priced in to the short end) and shrinking their balance sheet (where asset prices have been so dependent and addicted to QE in expanding multiples and compressing credit spreads), there will be no such thing as a soft landing. The only question is how much of an economic slowdown are they willing to tolerate in order to quell consumer price inflation at the same time asset price inflation deflates along with balance sheet shrinkage. There is no answer yet to that question because we’ll only know it when we get there. 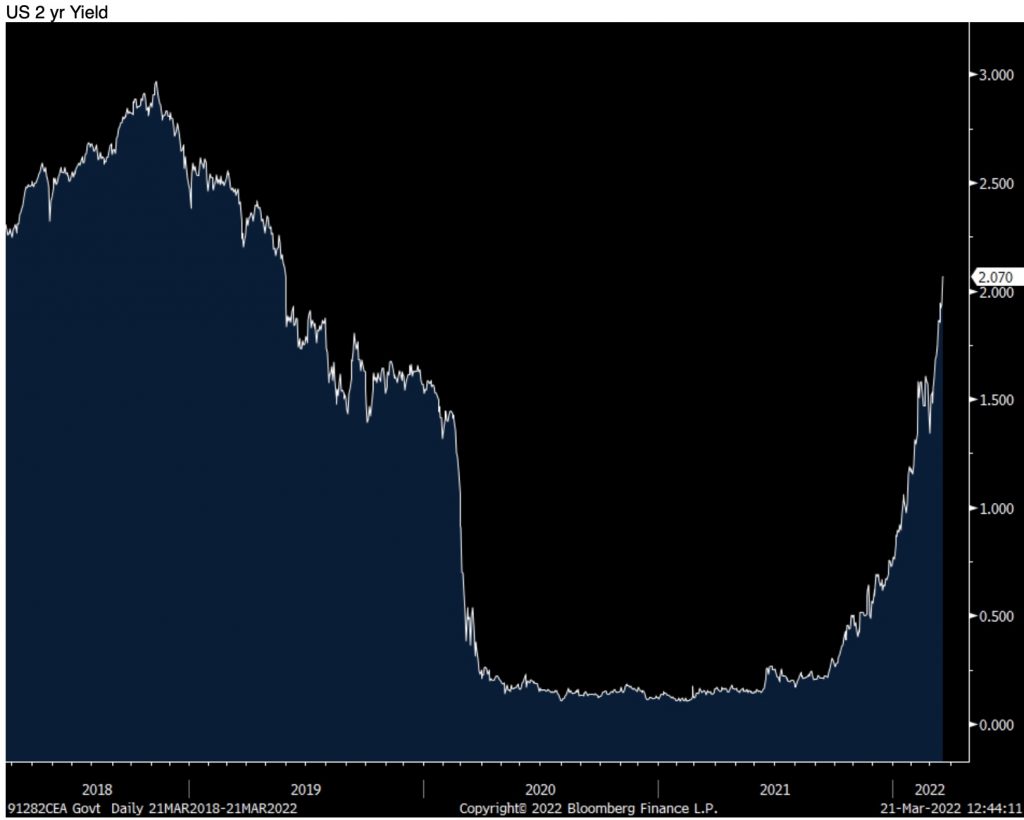 The Treasury market was already under pressure prior to the release of the comments because it was another bad day in European credit with yields up mostly 8-9 bps across the board. The UK 10 yr yield was up 13 bps today in particular. I’ll also say for the umpteenth time, analyze all you want the US economy but where European bond yields go and what the ECB does will have a major impact on US bond yields. 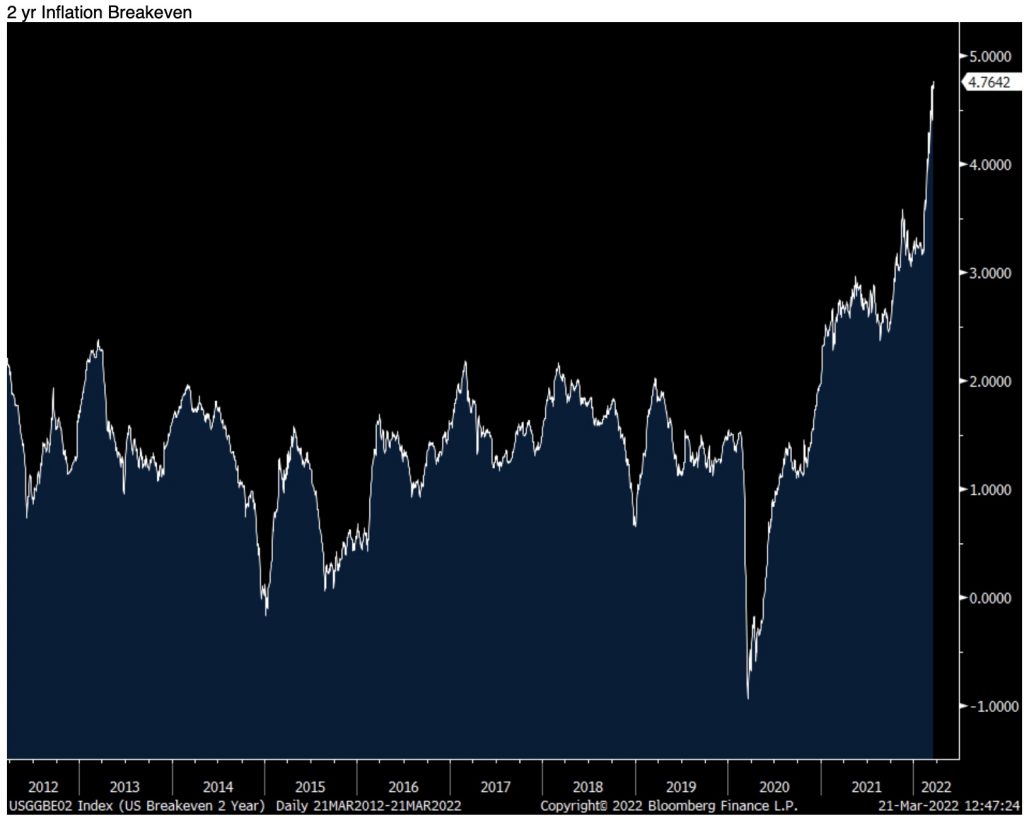 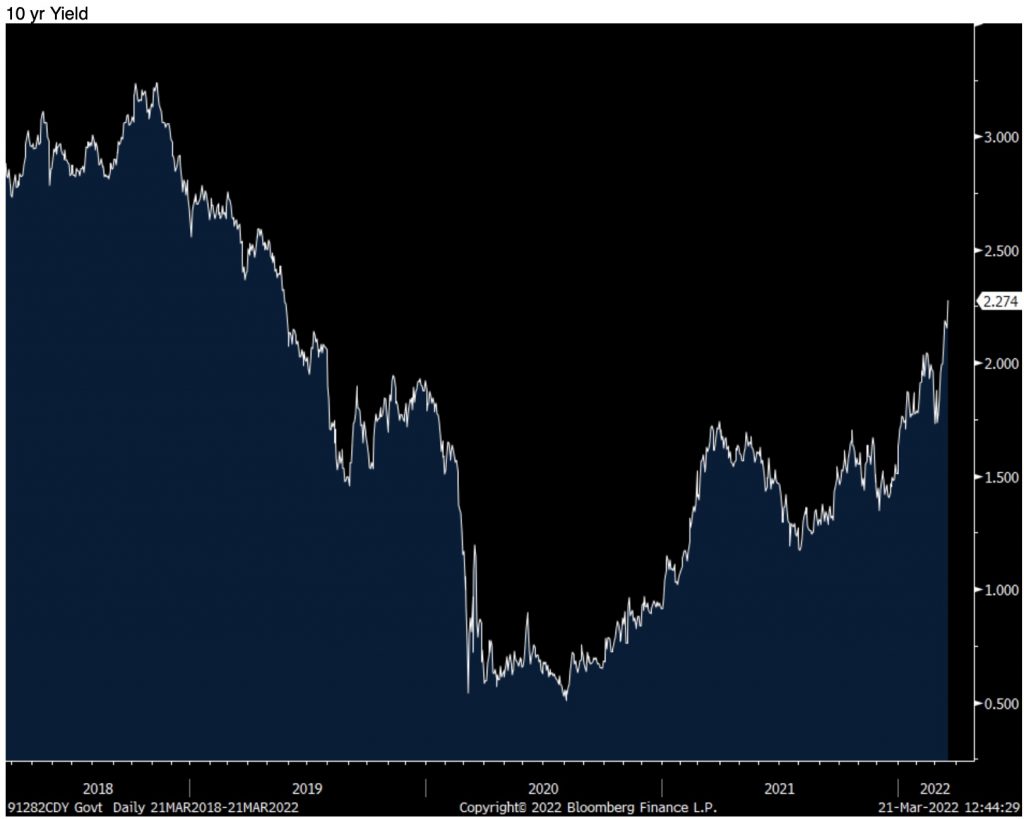 In other words, the further rise in commodity prices have overwhelmed the markets belief of Fed rate hikes and their ability to containing inflation.

“The Transaction elevates the Company into a multi asset producer and is accretive with the future cash flows of the mines financing the acquisition. We have been working closely with Glencore and the Bolivian government to ensure a smooth transition while the mines have generated sufficient cash flow to decrease the initial US$20 million upfront consideration down to US$12,011,148, which will be paid by Santacruz to Glencore within 30 days of closing and will be paid from working capital. We look forward to elevating Santacruz into a leading mid-tier silver producer while generating value for all stakeholders.”

“This is a significant acquisition for Santacruz that creates a leading mid-tier silver producer in the Americas. We are very pleased to team up with a great group of professionals in Bolivia, where Glencore has performed extraordinary work while achieving very high standards in terms of responsible mining practices and their commitment to responsible business and community relations. We will ensure that this excellent legacy continues in the coming years.” SantaCruz Silver, symbol SCZ in Canada and SZSMF in the US.

ALSO RELEASED:  THINGS ARE CRUMBLING: Expect More Controls As The Entire System Faces Disorder. Plus Miners Surge Strongly As Silver Hits $25.50 CLICK HERE.
ALSO RELEASED:  Greyerz – The Financial And Economic Collapse That Is About To Engulf The World Will Lead To Enormous Suffering CLICK HERE.