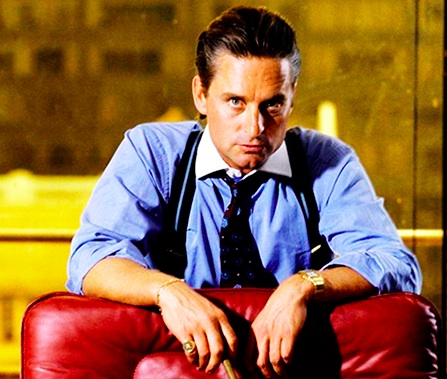 “The richest one percent of this country owns half our country’s wealth, five trillion dollars. One third of that comes from hard work, two thirds comes from inheritance, interest on interest accumulating to widows and idiot sons and what I do, stock and real estate speculation. It’s bullshit. You got ninety percent of the American public out there with little or no net worth.
I create nothing. I own.

We make the rules, pal. The news, war, peace, famine, upheaval, the price per paper clip. We pick that rabbit out of the hat while everybody sits out there wondering how the hell we did it. Now you’re not naive enough to think we’re living in a democracy, are you buddy?
It’s the free market. And you’re a part of it. You’ve got that killer instinct.
Stick around pal, I’ve still got a lot to teach you.” — Gordon Gekko (Wall Street)

John Embry:  “I think the global economic, financial and political situation becomes more fraught with danger every passing day.  The central banks are essentially impotent now in the face of an insoluble global debt and derivatives situation…

“The have now been reduced to running their mouths and providing whatever amount of liquidity is required to keep the whole edifice from imploding.

It would appear that the U.S. Fed has painted itself into a corner with its promise to raise rates.  They have waited far too long.  No the U.S. economy is giving ground noticeably, despite the government’s bogus economic statistics to the contrary.

U.S. Dollar Under Attack
This makes a rate increase clearly the wrong strategy at this point in time.  However, perhaps their real concern is the U.S. dollar.  The dollar is now overvalued from a trade perspective and it is also seriously over owned.  A number of dollar holders, China and Russia just to name two, are making noise about eliminating the dollar from global trade transactions.  This has been a massive source of demand for dollars.

At the same time, the petrodollar aspect is in increasing disarray as the major petroleum producing nations are no longer accumulating dollars, but rather being forced to redeem them in order to meet mounting deficits.  It’s just a matter of time before the U.S. dollar is replaced as the world’s reserve currency, and the implications of that in terms of the living standards for North America is very disturbing to put it mildly.

Eric, when you look at the U.S. debt situation it is truly mind-boggling.  Funded federal debt is now moving above $19 trillion, which is comfortably in excess of U.S. GDP.  This is a situation which is always a precursor to a debt crisis.  However, that is the least of their problems.  Off balance sheet debt is in excess of $5 trillion and unfunded liabilities are several multiples of the funded debt.

“Jesus you can’t make a buck in this market, the country’s going to hell faster than when that son of a bitch Roosevelt was in charge. Too much cheap money sloshing around the world.
The worst mistake we ever made was letting Nixon get off the gold standard.”
Lou Mannheim (Wall Street)

Catastrophic Situation
In addition, many states and cities have reached a crisis situation with respect to their finances and the consumer is now seeing an explosion in subprime auto loans, much of which will never be repaid.  This is in addition to the student loans, which are now in comfortably north of $1 trillion, an increasing amount of which are going into default every single day.

So the U.S. dollar is backed by a catastrophic debt situation, which is probably the worst on the planet.  The only antidote from a financial perspective is to own hard assets, particularly gold and silver, which are being aggressively repressed daily to keep the financial truth from the largely unsuspecting public.  Time is getting short to acquire physical gold and silver and the equities of the quality companies that mine them efficiently.  I can’t emphasize that enough.  If readers truly understand what is going on, they had better get positioned quickly.” ***KWN has now released the extraordinary top 10 trends and predictions for 2016 from Gerald Celente and you can listen to the audio interview by CLICKING HERE.

***ALSO JUST RELEASED:  ALERT: We Just Witnessed One Of The Greatest Contrarian Indicators In The History Of This Key Market CLICK HERE.