April 24 (King World News) – Dr. Stephen Leeb:  I keep coming back to the war in Ukraine. How can I not? First, it is making it clearer than ever that the world is nearing a critical juncture in which resource scarcities threaten the future of all people and all countries, rich and poor alike, around the globe. And two, the war itself is hastening that day of reckoning.

For investors, the war should also be making it clearer than ever that the surest path to financial protection – more than that, to wealth – lies with commodities and in particular with gold, which inevitably will need to play a major role as the world finally comes to grips with the severity of the problems we face.

Why do I draw such conclusions from the war? Start by taking a look at the chart. It shows how five currencies – the dollar, the euro, the ruble, the yen, and the Swiss franc – have performed since the start of the war. And to date, despite all the sanctions the West has hurled at Russia, the ruble has outperformed the four others, even the very strong dollar. 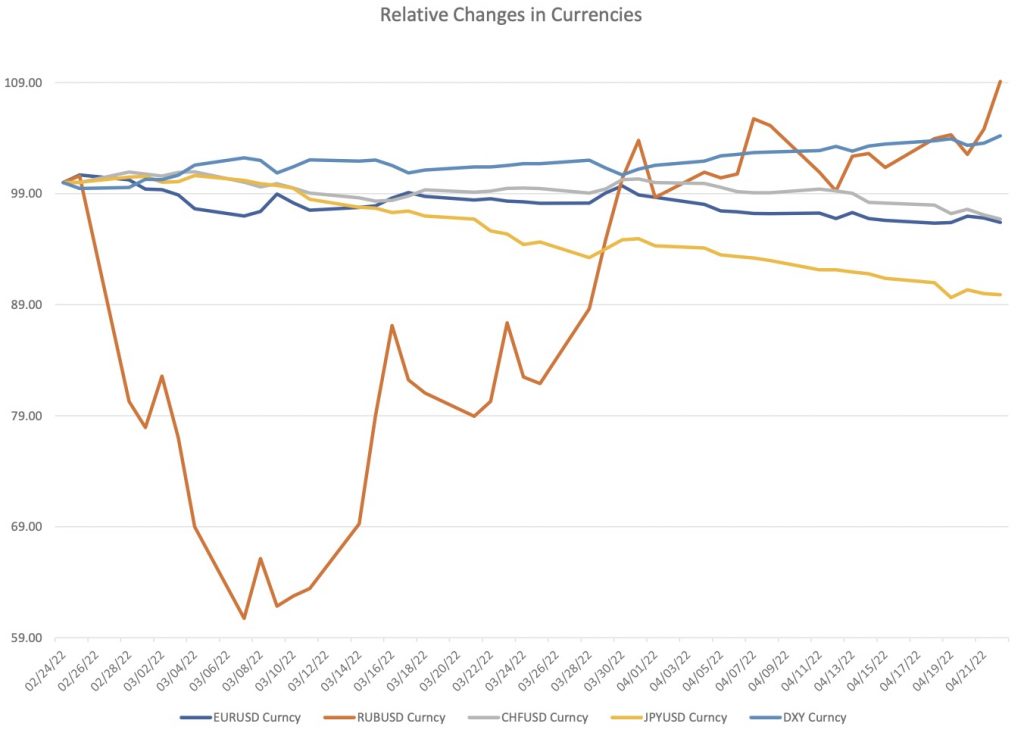 It All Benefits Russia
These numbers say worlds about the limits of our sanctions and the power of money. The most salient effects of the sanctions are to make already scarce commodities even scarcer and hence more expensive, benefiting Russia, a major source of many of these critical commodities…

Indeed, to the extent that sanctions succeed in harming Russian oil and food production, oil prices will soar, with prices between $150 and $200 well within reason. The war is also playing havoc with Ukraine’s ability to produce food. Ukraine, with its exceptionally rich soil, has been Europe’s breadbasket and is critical to the world’s food chain. Eastern Ukraine is especially important, and the war is upending this year’s planting season. If, as seems a good bet at this point, Russia takes over Ukraine’s South and East, Russia will control the bulk of food exports from Ukraine, which rely on the Black Sea for transit.

The war has brought home the massive gap between the North (a reasonable shorthand for richer countries) and the generally poorer developing countries of the South. In my last interview I cited a 1995 article in Foreign Affairs by Japanese luminary Eisuke Sakakibara. He argued that the Cold War between the U.S. and the Soviet Union amounted to a battle over which ideology would prevail. Democratic capitalism had been anointed to lead the world in an era in which, he argued, constraints on growth would become more numerous and burdensome. He focused in particular on constraints from pollution and damage to the environment.

For me, the article was a powerful heuristic that helped shape my view that in the wake of the Cold War, growth in the South would become key. Until recently, virtually all of world history has been characterized by forms of what’s known as “Pareto’s principle”, which posits that 80/20 distributions characterize almost all human endeavors – which, as applied to history, translates into the undeniable observation that humankind’s history has been one in which a small portion of the world’s population has controlled the lion’s share of wealth and power.

Wealth & Power Shifting To The East
China’s emergence has sharply challenged that rule. For the first time in modern times, and likely in all of history, the poorer part of the planet, containing about 80% of global population, has a larger aggregate economy than the richest 20%. The gap has been steadily widening and barring some sort of apocalypse will continue to do so.

That accelerating growth path of the 80% will fuel rising demand for diminishing resources. On our present course, there won’t be enough resources to accommodate it. If that sounds serious, it is. The entire planet is facing an existential crisis. Solving it will take all of the ingenuity we have and will require global cooperation, with every country contributing in whatever way it can.

If successful, we will eventually be able to rely on energy from the sun. But getting to that point will require dedicated use of a massive chunk of all the commodities and resources that we still can obtain along with developing new technologies focused on maximizing resource efficiency rather than on information processing…

The concept of growing resource scarcities has been widely discussed by many for at least half a century – and widely ignored by almost everyone who could do something about it. Instead, we have been squandering our resources at an accelerating rate.

The war in Ukraine, terrible as it is, may be the wake-up call. Especially if Russia prevails and occupies Ukraine’s East and South, it could make it clear to the U.S. and our allies that the current status quo has to change.

That status quo in the U.S. centers around our unbridled faith that money can cure all problems. I’ve pointed before to my view that once the U.S. went off the gold standard and was able to print money at will, we began to focus on short-term gratification. We lost any motivation for the kind of long-term thinking and planning that is utterly critical for developing the kinds of technologies to assure sustainable growth. This short-term thinking combined with an everyman for himself attitude has been a recipe for disaster.

New Monetary System Backed By Gold
Now Russia’s likely success in the war makes it clear that in today’s world you need more than money to win. And I see signs that this is bringing us closer to a monetary system defined by a shared basket of sovereign currencies backed by gold. Such signs include opinion pieces in major papers such as The Financial Times talking about the rise of nonalignment and even hinting at the growing need for cooperation. It will still be a rocky road to get to the right place. But I believe we are witnessing some first steps.

Important countries like Germany have begun to realize the current path could lead to catastrophe, and Germany has stopped shipping weapon to Ukraine. Recall Eisenhower’s warning about the military-industrial complex. Today I’d amend it to say military-industrial-fintech complex. The point is that its members, and in particular defense contractors, have been coining money.

You might ask why I think that the South, into which I’d now put Russia, will be willing to cooperate to build a better world or more precisely to save the current one. It’s because I think the stakes will become so evident that every country, as long as it can maintain its sovereignty, will opt for survival, and that requires a sustainable world. As I said above, there is some scattered evidence that cooperation is becoming less of a dirty word. Treasury Secretary Yellen, for example, despite China’s stance in the war has suggested it might be a good idea to reduce tariffs on China.

Demand For Gold Is Picking Up
Returning to investments, demand for gold is picking up though the price does not yet reflect it. It’s clear that the U.S. financial community is desperate to keep the dollar’s strongest rival on the sidelines. But equally clear is that it’s just a matter of time before the damn bursts and gold vaults higher. I continue to think that the mere mention of gold by a prominent government official in any major country in connection with a new monetary system will send the metal flying. The first stop will be somewhere around $5,000. That will be just the start.