Here Are The Big Surprises In Chaotic Global Markets

With the Dow above 18,000, gold trading near $1,200 and crude oil at $57, today King World News is featuring a piece from one of the greats in the business discussing the big surprises in chaotic global markets.

April 16 (King World News) – My parents took me to see West Side Story back in the early 1960s. It was only the second play/musical I had seen at the tender age of 11 and I was hooked. To this day I continue to be enthralled by plays and musicals.

One of the songs that stuck in my head was "Something's Comin'" as sung by Tony (Richard Beymer). I recalled that song last night as I stared at my internal energy indicator, which showed the stock market's internal energy has been almost totally rebuilt. That suggests there is plenty of energy to power a big move when this range-bound market finally resolves itself one way or the other.

Given the new highs in many of the Advance/Decline lines, and the strength in the market-leading Russell 2000 (RUT/1275.35), it feels like the breakout will occur on the upside. Why is the RUT the market leader right now? . . . Because the RUT is comprised mainly of growth stocks. If the equity markets are about to turn nasty, growth stocks should not be outperforming the major indices.

Indeed, strength in the growth stocks implies the markets are not worried about an economic recession. The first step of an upside breakout would be if the S&P 500 (SPX/2106.63) can decisively surmount the downtrend line in the wedge formation in the charts so often referenced in these missives.

The second step would be for the SPX to exceed the topside of the 2120 – 2040 range it has been stuck in since early February. In point of fact, the SPX has not really done much of anything since November of 2014. The implication is that the SPX has been consolidating its gains off of the October 15, 2014 "selling climax" low (we did a special strategy call on that day) and the SPX has built the long base with which to launch a decent move to the upside if it can break out of the "wedge" and then the 2120 level.

Speaking of breakouts, crude oil broke out of a reverse head-and-shoulders bottoming formation ($56.39/barrel) in the charts yesterday when it traveled above the neckline of said formation at $54.24. This is consistent with my call of the past three months that crude oil has bottomed! While there is no fundamental reason for it, price is indeed reality.

Moreover, as Chris Kimble, of Kimble Charting Service, writes (as paraphrased), "One ratio investors may want to acknowledge is the S&P 500 to Energy Select Sector SPDR (XLE/$82.70). As its name implies, the ratio gauges the strength of the largest energy ETF against the benchmark [S&P 500] U.S. equity index. . . .When the ratio is heading higher, the S&P 500 is reflecting strength over the XLE energy index.

As you can see (chart below), the ratio has just experienced one of its sharpest 9-month rallies in the past 20 years. This rally drove the ratio to the top of a rising channel and momentum reached the highest levels ever recently. XLE was the worst performer among the nine sector SPDR ETFs in 2014, but there are signs the energy sector is starting to turn around. 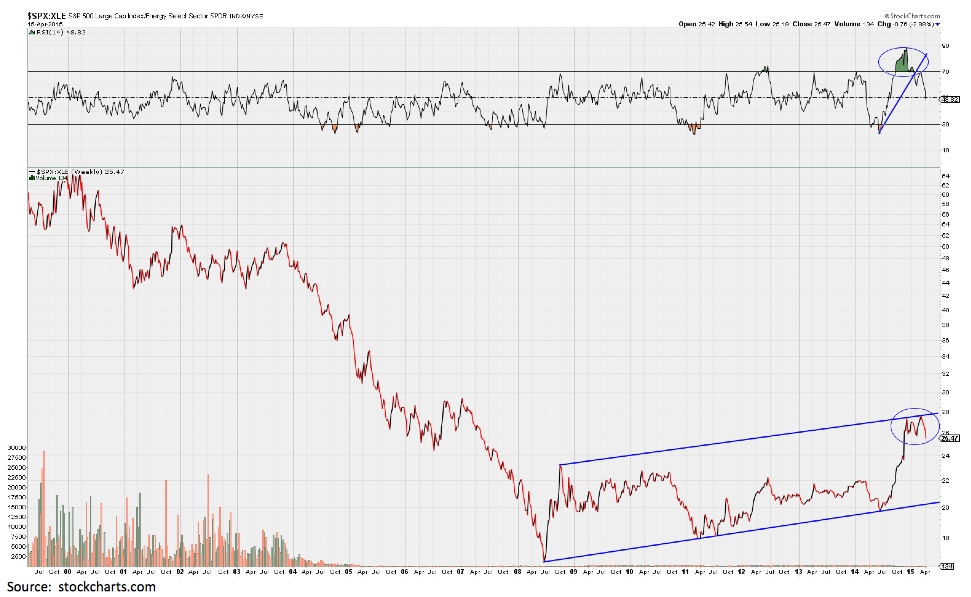 [The] XLE is up 6.7% over the past [few weeks], 10 times the returns offered by the S&P 500 over the same time frame. Additionally, XLE components could deliver upside surprises this earnings season, further bolstering the bullish case for energy stocks." Further, it is worth mentioning that the XLE is VERY close to breaking out above a massive bottoming formation.

Today's Morning Tack has exceeded its normal one page parameters because we believe the equity markets are at a VERY critical juncture. While the weight of the evidence suggests an upside breakout for the S&P 500, there is still the chance the nearly full load of internal energy might be released on the downside (stay nimble on a trading basis).

Yesterday, three economic reports came in below expectation (Empire Manufacturing, Industrial Production, and Capacity Utilization). However, for weather and other reasons often mentioned in these reports, these are March readings and we think economic reacceleration will materialize in the month of May.

The one better-than-estimated economic report that inked on Wednesday was the NAHB housing sentiment report, which was an April report. Worthy of note is that shares of market-leading Goldman Sachs stock (GS/$201.10) have traded above $200 for the first time since 2007 (a tip of the hat to my dear friends at the invaluable Bespoke organization).

Next week is the most robust earnings report week for the 1Q15, and in the longer-term scheme of things, it is ALL about earnings. We believe earnings will accelerate from here, implying stocks remain undervalued relative to current interest rates, which we think will remain lower for longer than most expect. This morning, the preopening S&P futures are off about 10 points on no news as things continue to get curiouser and curiouser . . . ***ALSO JUST RELEASED: 7 Of The Most Jaw-Dropping Charts Of 2015! CLICK HERE.