This is a truly stunning look at where things stand.

January 11 (King World News) – Peter Boockvar:  It was not surprisingly November 9th when market sentiment began to inflect higher again, after already riding the wave of summer reopenings and the continuous pace of massive Fed interventions. In particular we know we’ve seen sentiment get very giddy over the last month as the Investors Intelligence figure saw Bulls rise above 60 and its spread to Bears above 40. The AAII numbers finally saw Bulls get back above the level of Bears with the former now at the 2nd highest level since January 2018. We also saw multi decade lows in put/call ratios and the Citi Panic/Euphoria index got to 4 times the euphoria threshold.

As we know sentiment follows price, it should not be unexpected that we’ve seen this especially after the tough 2020 we had to endure personally and economically and the light to come with the vaccines. We have to now wonder though whether this rubber band of ebullience is getting so stretched that something is ahead that can trip up the mood. I say this today because the newly updated Citi Panic/Euphoria index has now gone literally parabolic (see below). 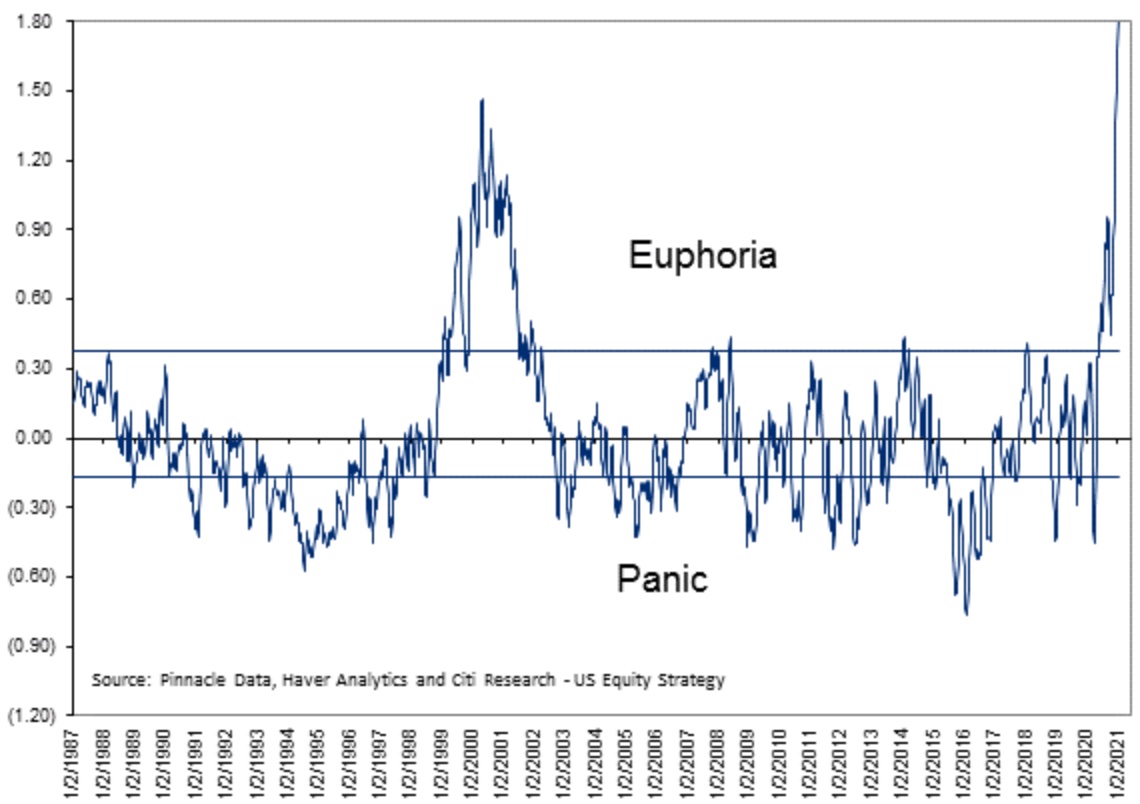 I now have Sir John Templeton ringing in my ear. Our clients are long, I am long but as a student of history, of markets, of market moods, it is really hard not to have an antenna up with the current market waters we are swimming in, in terms of this euphoric ebullience…

I said a few weeks ago that I think the key to where the broad market goes in 2021 will be mostly dictated by where the P/E ratio settles in at. With the vaccine and a recovering economy ahead, predicting the E I believe is the much easier part. With long rates now breaking out to the upside, if sustained one has to wonder whether we’ve now stretched the P/E multiple to its limits in this cycle as history shows it is greed and fear and panic and euphoria that mostly drive it.

China reported its inflation stats for December. CPI rose .2% y/o/y vs the estimate of no change. Food prices rose again after a drop in November. Prices ex energy and food rose .4% y/o/y vs .5% in the five prior months. PPI fell by .4% y/o/y but not as much as the -.7% forecast. Higher commodity prices and supply chain pressures will soon see this number trending positive again, along with easy comparisons. Easy comps are going to help all the inflation numbers around the world in the next few months. These numbers are not market moving but people still look at the PPI figure as a proxy for growth and industrial profits. As for CPI, it is best to see that as stable with still low per capita income in parts of the country. Chinese markets were mixed as the Shanghai comp fell 1.1% but the H share index was higher by a like amount.

With US dollar strength across the board, the yuan is lower. There is no question the dollar has gotten oversold and over hated in the short term and is a set up for a contra trend rally. I expect it to be no more than a dead cat bounce though.

US Dollar May See A Countertrend Rally

It’s a heavy week of Fed speak beginning with Bostic and Kaplan today with Powell in particular doing an economics webinar on Thursday with no speech but a Q&A. I did like Shelia Bair’s editorial last week in the WSJ titled “Corporate Debt ‘Relief’ Is an Economic Dud.” I whined last year as to why the Fed was buying the bonds of Apple, Amazon, Berkshire Hathaway and McDonalds to name a few. Like there isn’t a whole world of private sector buyers interested in these bonds.

If you didn’t read it, her piece said:

“Conservatives accuse progressives of wanting to destroy capitalism. Yet a greater threat than Bernie Sanders is the prospect of serial market bailouts by monetary authorities – first the banking system in 2008, and now the entire business world amid the pandemic…While there’s little evidence that the Fed’s corporate debt buy-up benefited society, its costs and unintended consequences are significant, with clear damage to competitiveness and productivity…the corporate facilities merely intensified the damage that monetary interventions had already dealt to US capital allocation.

Even without direct purchases of corporate debt, years of QE and super low interest rates have favored the equity of large companies over their smaller counterparts, perversely making investment in cheap companies with quality earnings a losing investment strategy…Capitalism doesn’t work unless capital costs something and markets don’t work unless they’re allowed to rise and fall. The corporate facilities may have originally been justified as extraordinary one-off interventions to help companies maintain operations, but they morphed far beyond this purpose, and distorted capital allocation.

The result was a windfall for investors, cheap credit for the uncreditworthy and record shattering levels of corporate leverage. They should not become part of the Fed’s standard tool kit. Let them die.”