As we come to the end of what has been a wild summer, this firm has issued a nearly $60 target for the price of silver.

By Ronald-Peter Stoeferle, Incrementum AG Liechtenstein
August 31 (King World News) – Valuations are always subjective. They are in the eye of the beholder and often vary considerably. Objective factors, such as production costs are entirely irrelevant for valuations. The market value of a masterwork painted by Vincent van Gogh is significantly higher than its production costs, and a glass of water will be valued quite differently in the middle of a desert than on the shore of a lake.

Last year we decided to set a time horizon of three years – i.e. to June 2018 – for our long term price target of $2,300 to be reached. This is based on the premise that the trend of price inflation is going to turn up…

Gold: comparison of absolute price levels
Nominal price comparisons involving goods denominated in fiat money are in our opinion misleading, particularly over long time periods. The quality of a dollar today is markedly different from that of a 1980 dollar, or even that of a dollar in the year 2000. When the gold price reached its (then) all time high of USD 850 per ounce in January of 1980, the average income of US households stood at approximately USD 17,000 p.a. Today such an income would be well below the official poverty threshold. The level of outstanding debt has changed rather significantly as well since then. While US federal public debt amounted to USD 863 bn. at the time of gold’s 1980 peak, the amount stands at USD 19.2 trillion today – an increase by a factor of 22.

One possibility for dealing with the problem the constant debasement of money poses for inter-temporal price comparisons, is to look at inflation-adjusted time series. Below we are charting the gold price both in nominal and inflation-adjusted terms. We have already discussed the changes in the methodology used to calculate inflation and the consequences for official price inflation rates. A correct adjustment for changes in money’s purchasing power is very difficult in light of the many problems attending the measuring of price inflation. In order to present alternative perspectives, we have adjusted the gold price both by the official consumer price index as well as by the inflation data published by Shadow Stats. 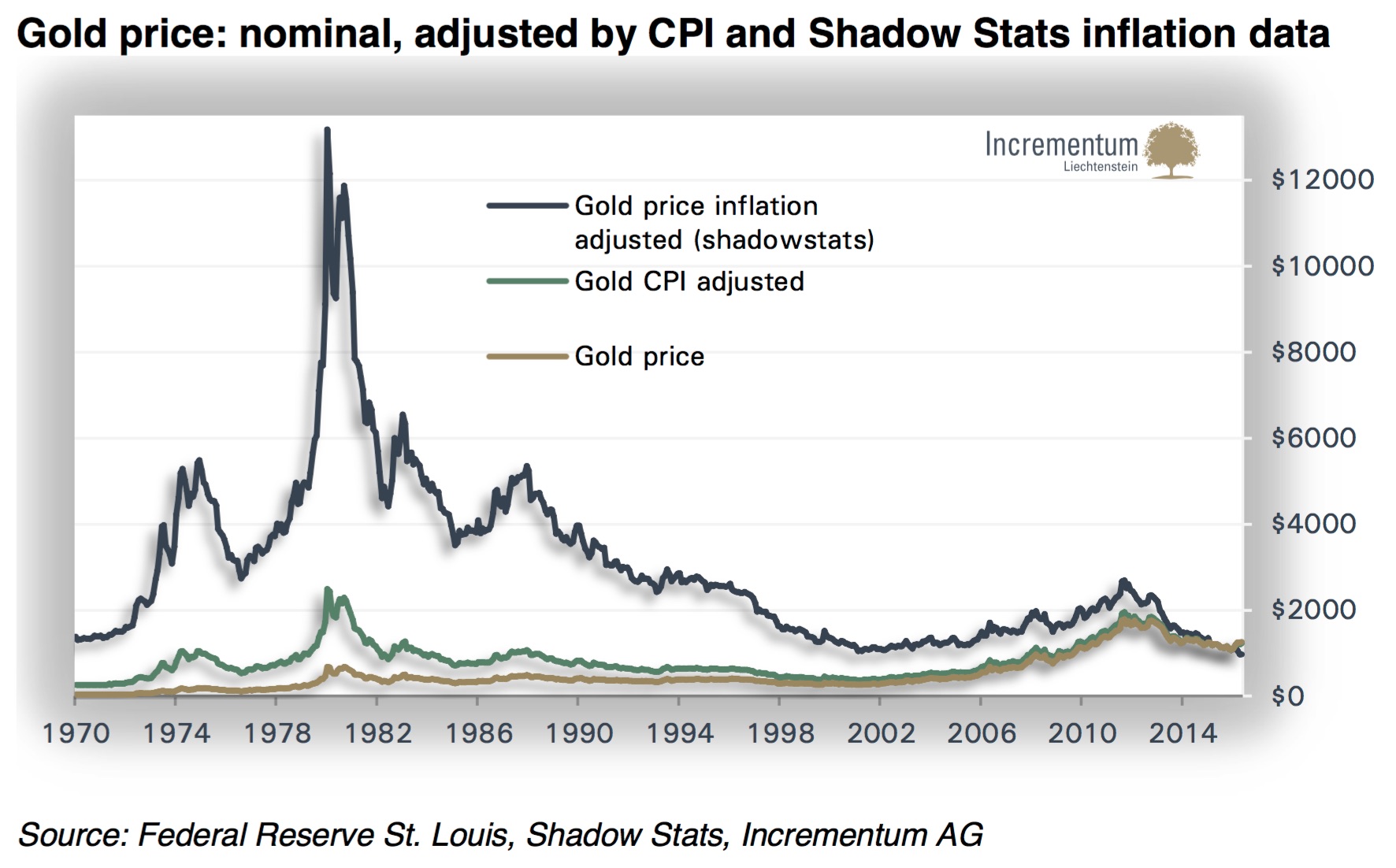 $13,177 Gold…
As can be seen, gold currently trades significantly below its inflation- adjusted peak, regardless of the adjustment method one employs. Adjusted by the official CPI inflation rate, the 1980 peak is equivalent to USD 2,481 in today’s money. Using the Shadow Stats figures for the adjustment, the 1980 peak is equivalent to approx. USD 13,177. Both in nominal terms (relative to 2011), as well as in inflation-adjusted terms, the gold price is therefore still far from its former highs.

Gold: comparison of relative prices
Another possibility of assessing valuations are relative price comparisons (i.e., via price ratios). These show the exchange ratio between two goods over time. This comparison is especially useful if one compares the ratio of goods with standardized characteristics. We have taken a look at the purchasing power of gold expressed as a ratio to other goods over recent decades. Over the long term it is to be expected that these exchange ratios will revert to the mean. 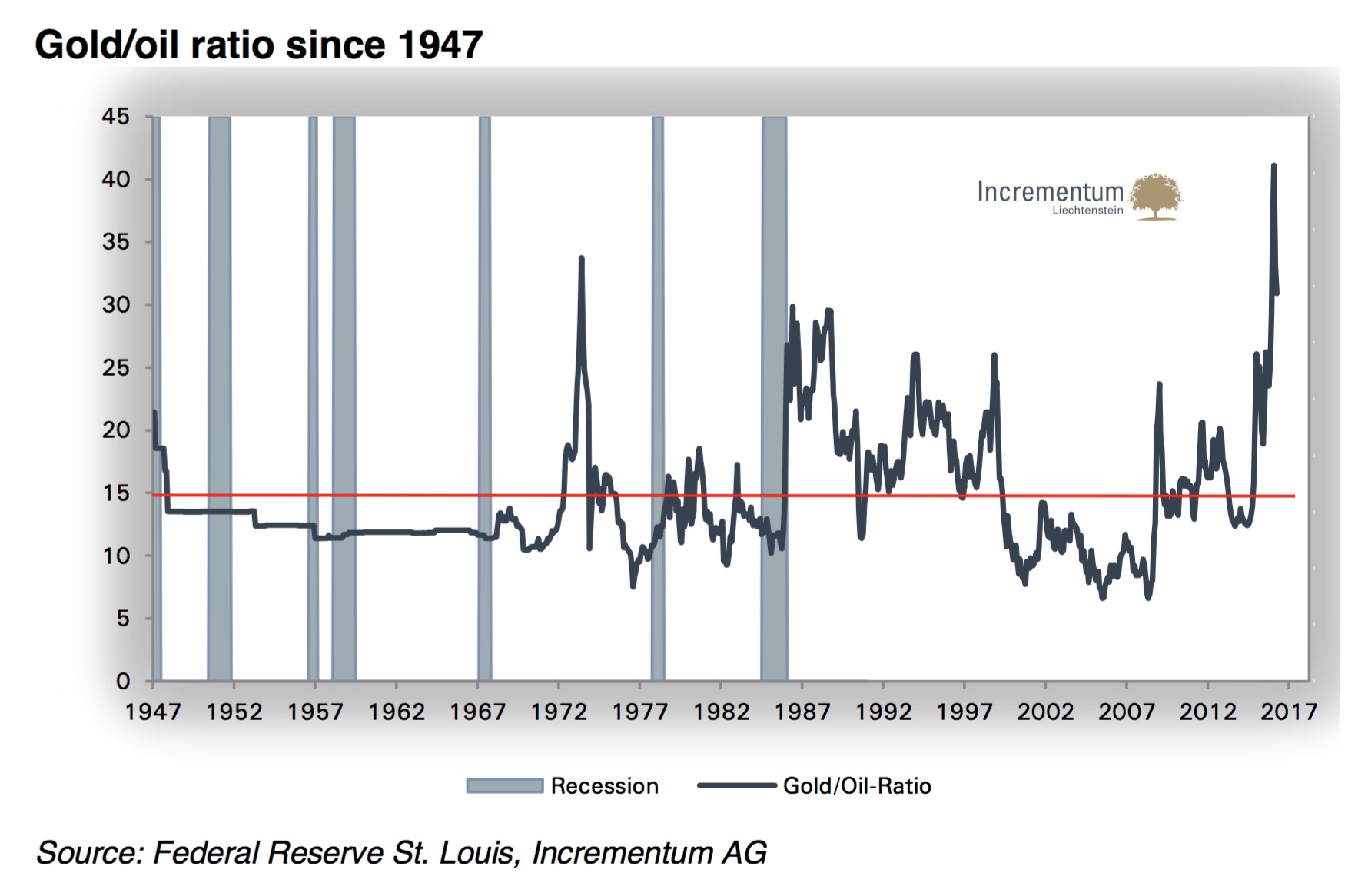 The ratio of gold to oil is especially interesting. While gold is a monetary commodity, oil is the most important industrial commodity. The range in which the gold-oil ratio moves is smaller than that of ratios of gold to other commodities. However, there are a number of interesting historical extremes, which were largely driven by oil-specific events.

Currently an ounce of gold will purchase 30 barrels of oil, which is significantly above the long term average of 14. Recently the ratio reached its highest level since the early 1970s. Thus oil appears clearly undervalued relative to gold. A reversal to the mean would definitely be imaginable in an inflationary environment. In such a scenario, the price of oil would rise even more strongly than the gold price. Such a development would represent quite a black swan for most market participants. At a gold price of USD 2,300 combined with a normalization of the gold/oil ratio toward the 20 level, the price of oil would be at USD 115 – a price level most market participants don’t even consider an extreme tail risk anymore.

When inflation strikes: Silver!
Analogous to the gold price we want to take a look at the inflation-adjusted silver price as well. The current price of silver doesn’t even look particularly expensive in nominal terms. Adjusted for CPI and Shadow Stats inflation rates, the price of silver is definitely at a historically extremely low level. 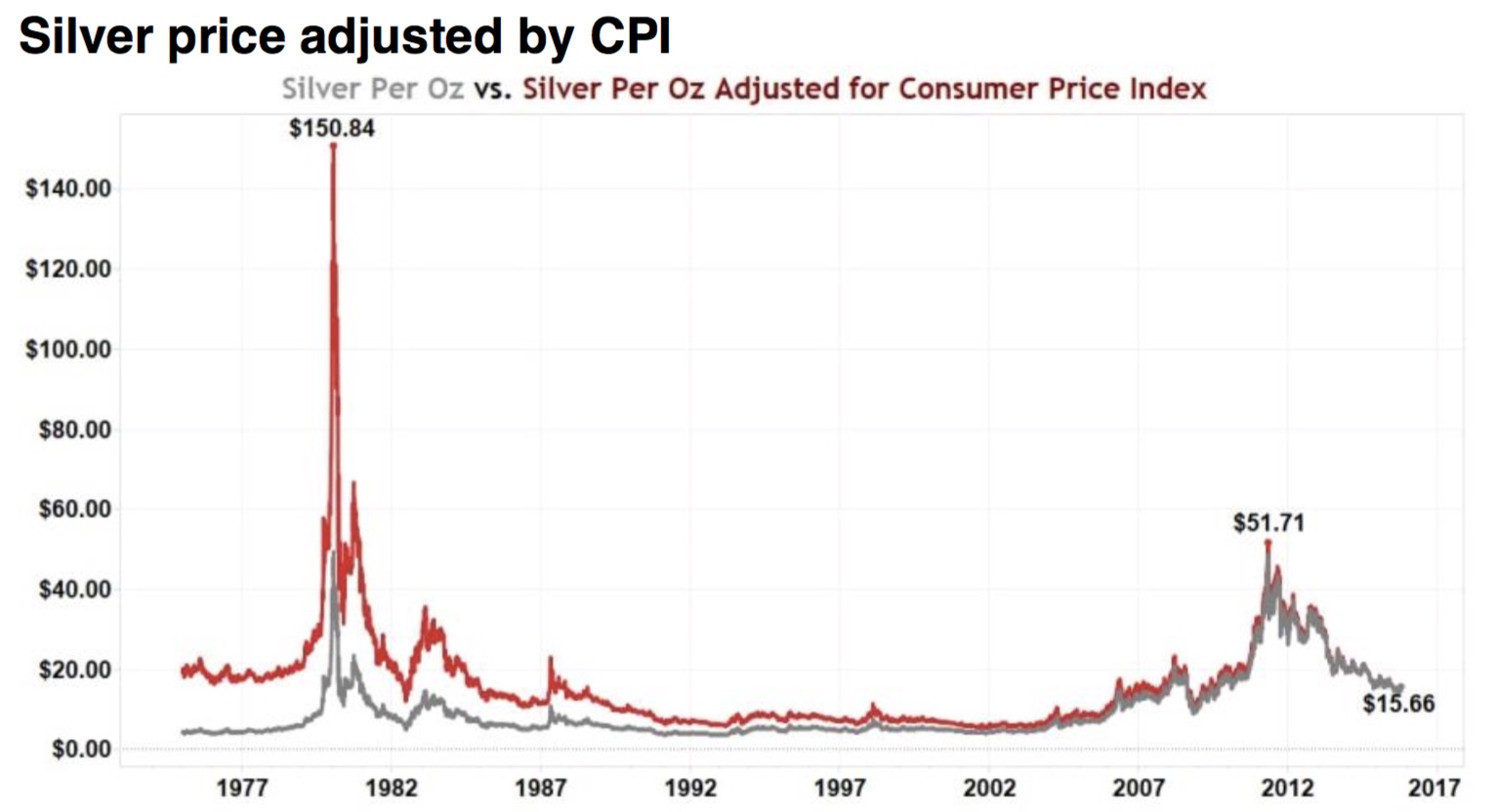 Nearly $60 Price Target For Silver
Should our assumption of an upturn in the trend of price inflation turn out to be correct, silver will be one of the investment assets likely to benefit the most from the inflationary trend in coming years. At a gold price of $2,300 and a gold/silver ratio of 40 (which would appear quite realistic to us in an environment of rising inflation) the price of silver would stand at $57.50.

LOOK AT HIS PRICE TARGET: James Turk – The Real Short Squeeze In Gold Is Now Underway, Plus A Look At A Serious Collapse