As traders across the globe await the next major market move, it now appears that things are tough all over.

That Clever J.P. Morgan
February 5 (King World News) – Here is a portion of today’s note from legend Art Cashin:  On this day in 1895, America was in a funny financial spot. Well, it was a bit over a hundred and twenty-one years ago today – so – I guess you deserve an explanation. Let me see….if I remember what Sister Herman Joseph taught me – that different America of a century ago looked something like this:

The economy appeared to be struggling. There was a Democrat in the White House. Congress was divided and squabbling, hostily and uncivilly. Some thought the debates were so coarse and rude they spoke of forming a new political party. Technology was the new mantra even after a bumpy start and telecommunications were exploding (in use if not profitability). Much of the country was in the grip of unusual and extreme weather. And…oh yeah….I almost forgot….suddenly folks had begun talking about gold….can you imagine “gold!”

Anyway, despite what pundits of the day thought, gold had begun to rise. Now, in 1895, the old U.S. was on the old “gold exchange standard.” That meant, whether citizen or foreigner, if you thought public policy was not to your liking, you could hand in your green pictures of dead presidents and get gold – real, glistening, bite into it to check it, gold.

As hard as it is for us to believe today, a goodly number of those citizens distrusted what they saw in Washington. Gold rose and soon began to bubble and the dollar began to slide. The rush to exchange dollars might deplete the gold of the U.S. Treasury and cause a default. Imagine – a time when the government wrestled with the question of default.

So – to avoid chaos – the President sought the help of the one man who could control the banks, who could calm Wall Street, who – in short – could find a way to halt the run on the dollar and government reserves. (No Virginia, it was not Jerome Powell – there was no Federal Reserve.) 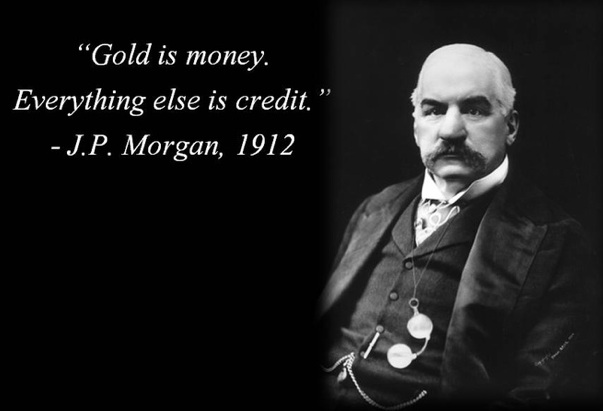 Thus, on this day in 1895, the President of the U.S. sat down with a certain J.P. Morgan seeking the latter’s help in saving the country.

Morgan allowed as how he might just happen to know one fellow who could put the government into default that very afternoon. (The President never asked if it was Morgan, himself.) Morgan conveniently recalled some obscure Civil War legislation that allowed the President to issue bonds to buy gold. The same law said the bonds could be sold secretly (without bidding). But who would buy them. Well, Morgan allowed as how it was probably his civic duty (along with that of his syndicate) to not only buy the new secret bonds but to buy up some gold and recycle it to the Treasury for the dollars he paid for the bonds. And all this for just a small commission.

To mark this anniversary recall the words of Warren Buffett – There’s always a silver lining – or was that Jimmy Buffett.

Things Are Tough All Over
And here is a portion of today’s note from Peter Boockvar:  The revised January services PMI for the Eurozone was lifted to 51.2 from the first print of 50.8 and that puts it unchanged with December. That though is a 49 month low with France and Italy “the primary sources of weakness, with both countries registering declines in activity during January.” Business improved in both Germany and Spain. The combined manufacturing and services index is at 51, the weakest in years. Markit said “The Eurozone has started 2019 on a flat note, with growth close to stagnation amid falling demand for goods and services.”…

They forecast this level as equating to growth of just .1% q/o/q which would be the slowest since 2013. They summed up the report by saying:

“The survey indicates that political uncertainty, both global and local, is increasingly taking a toll on growth, dampening demand and driving increased risk aversion. Add in rising global trade tensions, Brexit uncertainty, the ‘yellow vest’ protests in France and a spluttering auto sector, it’s clear that the business environment is at its most challenging since the height of the region’s debt crisis.”

San Francisco Fed Piece Is Complete Nonsense
To this point, this piece released yesterday by the San Francisco Fed I believe is complete nonsense, https://www.frbsf.org/economic-research/publications/economic-letter/2019/february/how-much-could-negative-rates-have-helped-recovery/.

NIRP in the US would blow up the money market industry, the source of $3 Trillion of funding for a variety of short term debt. And, how exactly would a tax on capital lead to faster growth?

US On The Fade
Finally, I didn’t highlight it yesterday because it was an old November number but capital spending in the US definitely slowed into year end. Non defense capital goods orders ex aircraft, aka core capital spending, fell .6% m/o/m in November, the 3rd monthly decline in the prior 4. We’ll soon see December but with everything going on that month, I’d be hard pressed to think it improved. The US consumer right now is the main pillar of US growth with a strong labor market and rising wages.