After a wild trading week, these surprising events are now unfolding across the globe.

Stephen Leeb:  “For Fed watchers, December 14 was a day of note, marking only the second time since the Great Recession the central bank raised interest rates, albeit still keeping them below 1 percent. Even more important, it was the first time Fed Chair Janet Yellen assessed the economy as strong and resilient, enough so as to suggest three more rate rises in 2017. Brave words…

1973 & 1980, U.S. Begins To Move Into Recessions
For a while the economy now shows strength, it faces a potentially toxic combination of challenges posed by the concurrence of a strong dollar, rising commodity prices, and rising interest rates. The only other two times in the past 50 years we’ve seen this combo in the context of an economy operating at full capacity was in late 1973 and the start of 1980 – the starts of recessions of epic proportions.

Ironically, in praising the economy’s resilience, Yellen may actually have accelerated the trends that could undermine the strength she referred to. Specifically, her remarks boosted investors’ confidence in the dollar, which strengthened sharply after she spoke. In the context of rising commodities, a stronger dollar isn’t something to applaud. Rather, it’s likely to hasten a new monetary system in which the dollar plays second fiddle, pushed aside by a monetary system revolving around a basket of currencies backed by gold.

Rebound In Gold As U.S. Risks Becoming Banana Republic
That development will spur a long-term rebound in gold. For a while longer, though, gold will likely follow the path of most other currencies and remain inversely related to the dollar as the buck nears its last gasp as the world’s primary reserve currency.

Yellen’s cautioning that the economy is close to full capacity and needs neither extra stimulus nor large tax cuts to create jobs suggests she’s aware there are many potential pitfalls, with risks of inflation on the one hand and deflation on the other. The trends we referred to above – the strong dollar and rising commodities along with rising interest rates – could lead to economic headwinds that could force the Fed to reverse its monetary tightening. But that risks unleashing commodity led inflation, in which the United States risks becoming something akin to a banana republic

On the other hand, persisting with a tight monetary policy nearly certain to further boost the dollar, and not necessarily curb commodity headwinds, would likely send the economy reeling into a deflationary spiral. In other word, there is no middle ground between accelerating inflation and deflation.

Unemployment Skyrockets In Mid-1970s And Early 1980s
The recessions of the past were bad enough. In 1973’s contraction, unemployment soared from 4.6 percent (the same rate as today) to over 9 percent in 17 months. The Dow Jones Industrial Average fell by more than 40 percent, while small caps by some measures plunged more than 70 percent. The recession beginning at the start of 1980 was really a two-legged affair in which growth flattened out for about a year between mid-1980 and mid-1981 before diving again. The most devastating aspect of that catastrophe was unemployment that reached 10.8 percent in late 1982, the highest level in postwar history (see chart below). 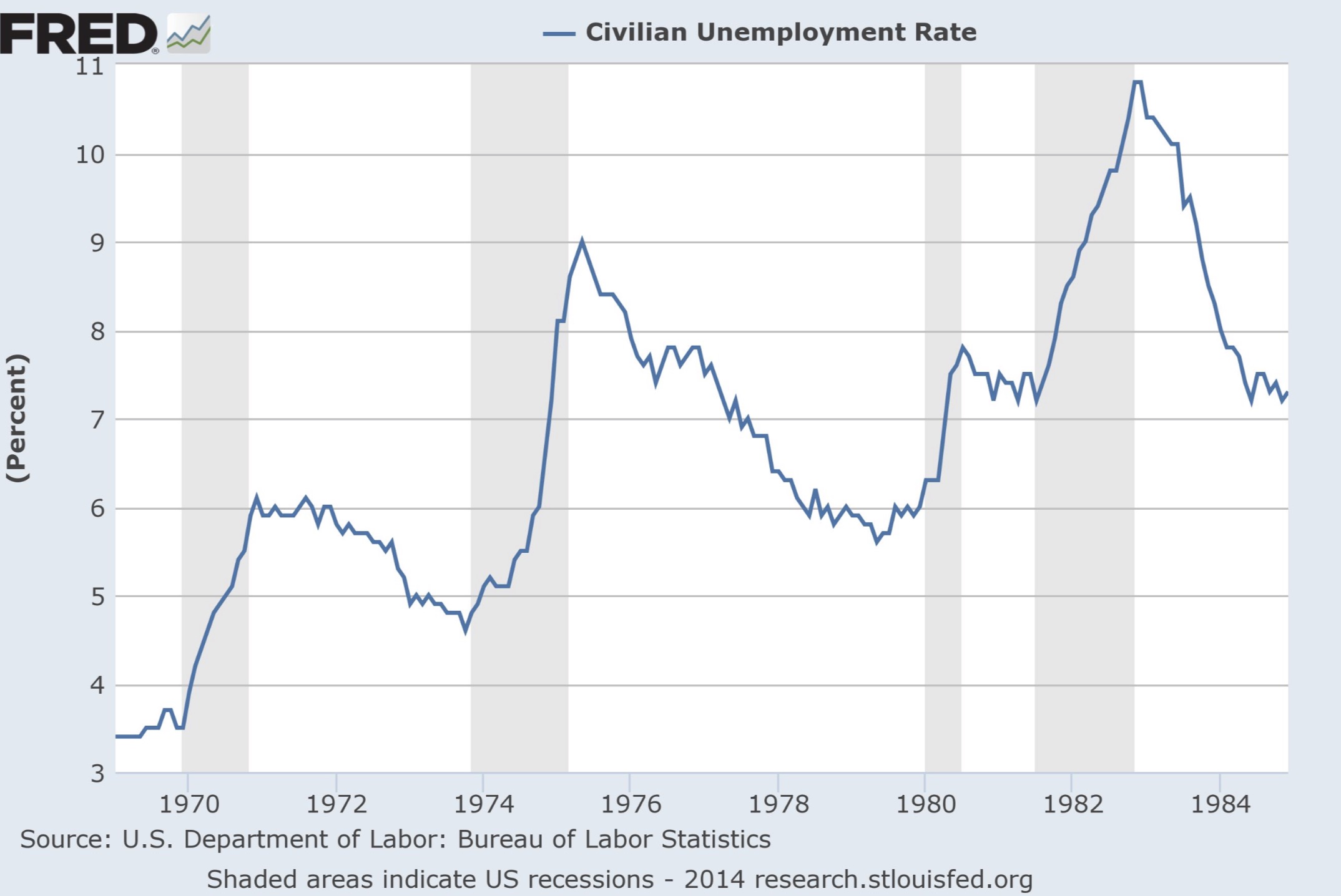 But a recession this time around could be even more destructive, because the U.S. is more vulnerable today. In those earlier periods, which were far closer in time to when we had ditched the gold standard, our debt levels were much more modest. And the glaring inequalities that have spawned populism here and abroad had yet to emerge. Recession today could mean not just economic pain but also social unrest with unpredictable consequences.

Russia & Saudi Arabia Spearheaded OPEC/Non-Opec Oil Deal
One remarkable story not getting enough attention is that the recent oil deal between OPEC and non-OPEC producers resulted from an agreement between Saudi Arabia and Russia, two Eastern countries with a long history of animosity toward each other. Bloomberg reported that the deal to cut production was saved by a 2 A.M. phone call between the oil heads of Russian and Saudi Arabia, during which Russia agreed to cut production rather than just freeze it.

New Eastern Oil Benchmark And A Gold-Backed SDR
That phone call (assuming Bloomberg’s information is correct) signifies a coalescing of the East. My guess, as I have said before, is that a new Eastern oil benchmark will start trading likely next year and will be the springboard to vault a gold-backed SDR into the forefront of the world’s monetary system. It also will mean that it’s the East that will have the most control over oil prices, which suggests prices will rise faster than most think, putting more pressure on the U.S. economy.

In the past, when commodities rose, the dollar would fall and vice versa. That negative correlation was because commodities were priced in the dollar, which was the basic unit of trade. And it evened things out for Americans: the strong dollar, which works to crimp growth by making America’s exports more expensive, was offset by lower commodity prices.

But we’re seeing the end of that helpful negative correlation. For a good part of 2016, the dollar has risen, reaching a 14-year high on the day the Fed raised rates. Yet 2016 will likely be one of the five strongest years ever for commodity prices. Commodity prices have risen about 25 percent over the past year. Blame it on China and the East, where growth is strong and unlikely to falter.

Scenarios For How This Will Play Out And Who Will Win
Unless there’s a fall in the dollar, commodities, or interest rates, the U.S. economy is likely to lose steam in a hurry, and all the potential scenarios are grim. If growth slows in the U.S. and commodities, thanks to the East, stay strong despite a rising dollar, we are in trouble. Or if the dollar weakens because the Fed changes course, commodities, barring a worldwide recession, are likely to further strengthen. Finally, if the strong dollar and rising interest rates do break the gains in commodities, the developing world will weaken dramatically likely leading to worldwide deflation. The tightrope separating inflation from deflation has become far too narrow to walk.

What about any prospective tax cuts and infrastructure spending? While they could have long-term benefits, they’d also lead to record debt, even more pressure on commodities, higher interest rates, and the possibility of sharply rising inflation. Any number of vicious circles is possible, all with dire results. To name just one possibility, with the Fed unlikely to raise interest rates above inflation, real rates would stay negative, which means ever more borrowing and debt. That would be a recipe for major inflation.

It’s a far cry from Yellen’s optimism, however tempered. With the U.S. floundering, the world will be casting about for a more reliable monetary alternative. That leads to the SDR and gold. It’s worthwhile to again emphasize that whether the’ too thin tightrope’ leads to a deflationary or inflationary vicious circle, the only sure winner is gold.”

How’s This For Shocker Inflation?