There Are Very Serious Economic Problems As Stock Market Tests Recent Lows, Plus A Look At Real Estate

There are very serious economic problems as stock market tests recents lows, plus a look at real estate.

Market Turmoil
May 24 (King World News) – Art Cashin, Head of Floor Operations at UBS:  …It looks like we are, in fact, having that choppy testing kind of day. … the drop in the ten-year yield looks like more than economics.  There is a sense that there is a flight to safety in that somewhere out there, there is a fear of something of a systemic surprise.  The market has been nervous about that kind of thing ever since stablecoin broke several days ago and, I think, when Bitcoin goes down it seems to put pressure on the markets.  If, heaven forbid, Bitcoin were to break below 28000, you would need a helmet and bullet proof vest.

Okay…let’s review some of this morning’s numbers.

So, the hope for the bulls is probably to regroup the Dow and see if they can pull it up.  The bears are obviously working on Nasdaq and, as I said to Carl, the real hope here is not to have an ugly day…a down 700 or something, which would give us some problems with the short-term cycles.

Serious Economic Problems
Peter Boockvar:  Markit’s (now S&P Global) May manufacturing and services PMI fell to 53.8 from 56 with both components weaker m/o/m. Manufacturing fell to 57.5 from 59.2 while services was at 53.5 from 55.6.

With respect to services, the index is at a 4 month low and “the pace of expansion was reportedly weighed down by hikes in selling prices and concerns with higher interest rates.” Also, new orders moderated to the slowest since August 2020.” Employment was a bright spot as “The rise in employment was the 2nd fastest in over a year as companies sought to fill long held vacancies.”…

On the pricing front:

“Service providers registered the fastest rise in input prices on record in May as cost burdens soared. Hikes in wage bills, interest rates, fuel costs and material prices were all noted as factors behind inflation.”

On passing this on to the rest of us:

“Although firms sought to pass higher input prices on to clients, the rate of charge inflation eased from April’s record high and was the slowest for three months.”

Margin compression is the difference. In contrast to all the fears, optimism for business “strengthened” on “hopes that staffing and material shortages will have eased over the coming year.”

While manufacturing slowed, the headline number is still elevated and “was supported by strong and steep expansions in output and new orders respectively, alongside a faster upturn in employment and longer supplier lead times.” The caveat:

“further reports of raw material shortages and delays in supplier delivery times dampened output growth and led to a quicker rise in work-in-hand.”

“inflationary pressures remained substantial, with input costs rising at the sharpest pace since November 2021. Inflation stemmed from hikes in key components and logistics including: transportation, metals, fuel and cardboard prices. Output charges rose at the 3rd steepest pace on record (since May 2007) as a result.”

The business outlook did fall to a 7 month low “as hopes of new client acquisitions and greater demand were dampened by inflationary fears.”

I’ll leave the bottom line to S&P Global but one we’re now fully aware of:

“Companies report that demand is coming under pressure from concerns over the cost of living, higher interest rates and a broader economic slowdown.”

Real Estate
New home sales in April totaled 591k, well worse than the estimate of 749k and down from 709k in March (revised from 763k). That’s the lowest since April 2020 and I can’t remember the last time I’ve seen such a big miss relative to expectations. 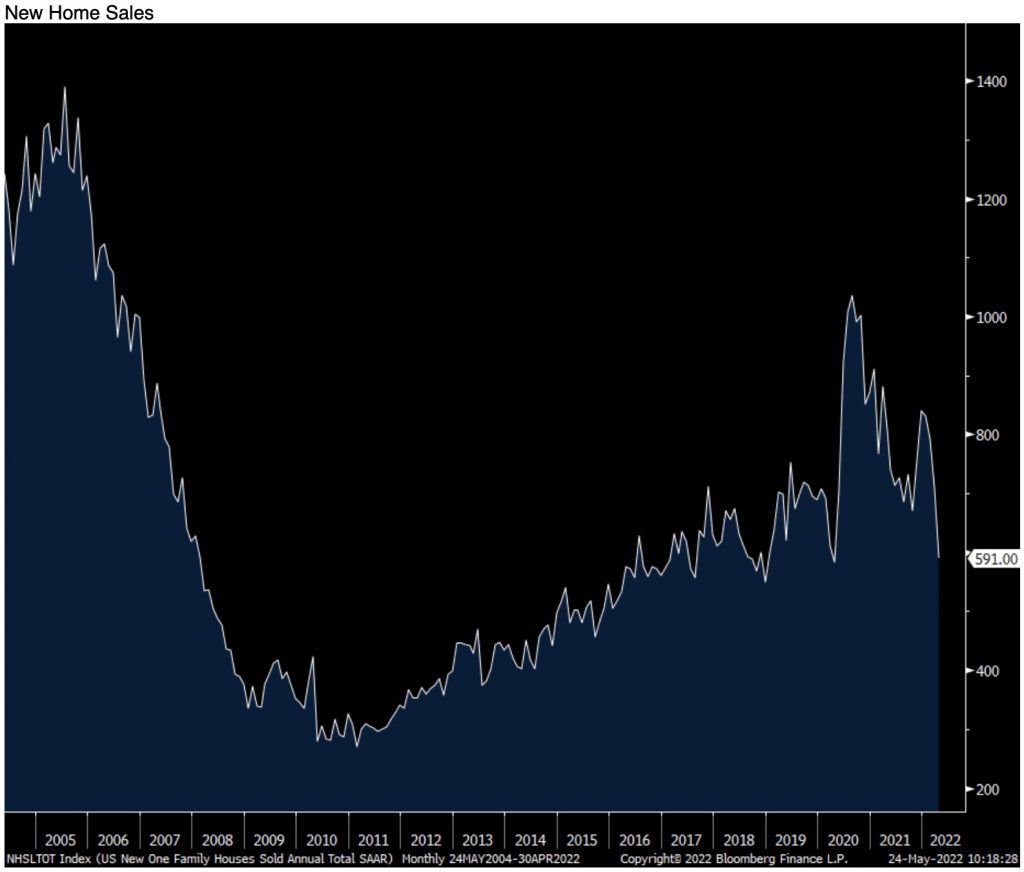 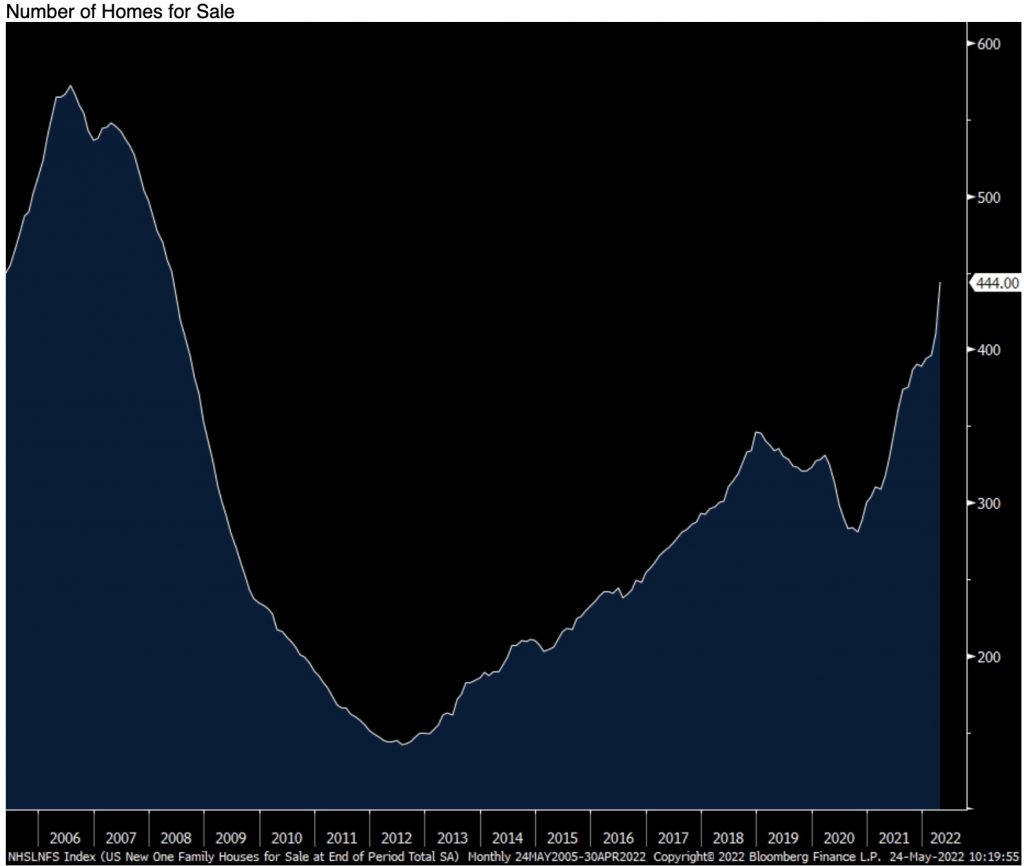 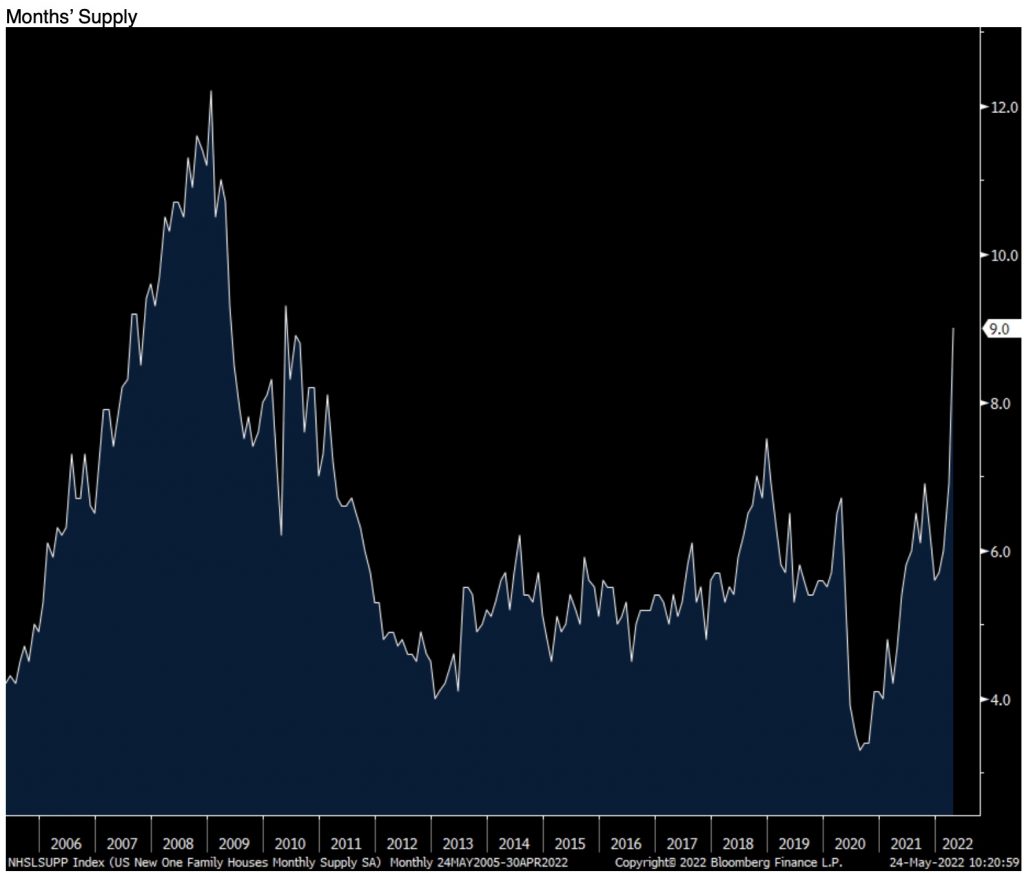 Now not all of those homes are finished but gets to the point you’ve heard here for months that maybe we’re building too many new homes. The y/o/y change in home prices was up 19.6% after a 21% rise in March but a lot influenced by mix as there was a sharper decline in homes sold priced below $500k vs those priced above.

Bottom Line
Bottom line, while not all complete, or even started, with more homes for sale at record high prices (a combination which is not sustainable) and with much higher mortgage rates, it’s no surprise now that we’re seeing a slowdown in the pace of transactions and with homebuilders trading as poorly as they are. Again, the only question at this point for both new and existing (about 90% of the market) is to what extent does home price inflation slow.

On this number after the manufacturing and services PMI and the negative Richmond survey going negative, the 10 yr yield is at the lows of the day at 2.75-.76% and quietly at a one month low. Inflation breakevens are down too as is the dollar. Lastly, and if you made it this far in reading, the May Richmond manufacturing index fell to -9 from +14 and that was well below the estimate of +10. 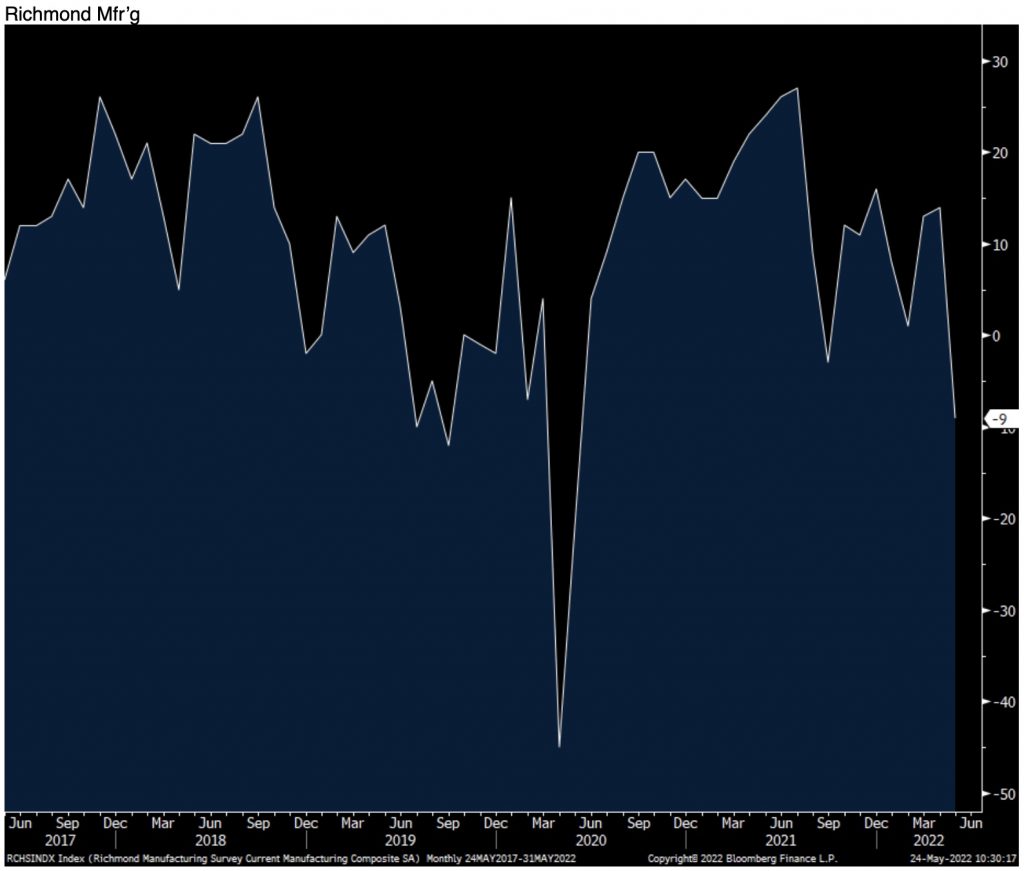 More “Transient” Inflation
Stagflation was all over this as wages held steady and prices paid and received jumping with the former at a fresh record high. 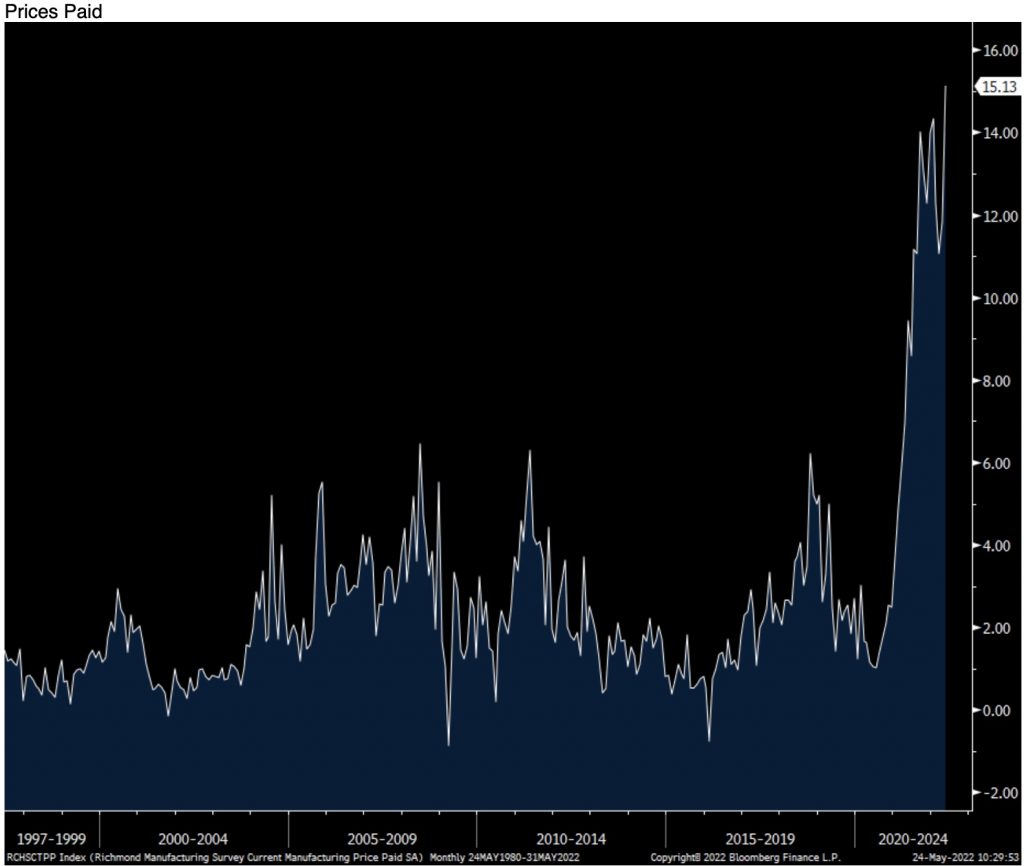 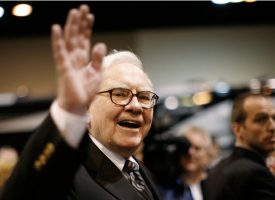 Russia Looking To Officially Back Ruble With Gold