The world is now at a critical turning point and that has many across the globe very concerned.

Dying Capitalism & The New Feudalism
December 10 (King World News) – Matt Piepenburg at Matterhorn Asset Management: American exceptionalism, as current COVID and capitalism disasters confirm, has morphed into a distortion that resembles more of a comorbidity than a guiding light.

Despite a prior reputation for leading the world in innovation, problem solving and health care, the U.S. is witnessing record hospitalizations in a nation comprising 5% of the global population yet 25% of its COVID infections.

Regardless of one’s politics, the COVID crisis is now an open symptom of failure, not exceptionalism.

The same is true of the current crisis facing American capitalism.

In its purest form, capitalism is an exceptional system, yet sadly one that is morphing into something that is anything but exceptional.

A Critical Turning Point
Regardless of legitimately debatable views on how individuals and policy makers (from central bankers to health organizations) have handled the pandemic, we can all agree that COVID represents a turning point…

The question now is whether it will be a turning point for the worse or the better.

One way to forecast this direction is by tracking the current health of U.S. capitalism.

Does that feel like capitalism working at a national level, or something far more targeted and far less “free-market” driven?

The very concept of central-bank supported (and Congress-lobbied) capitalism is itself an oxymoron, and requires on honest re-assessment (and some hard questions) regarding the true meaning of capitalism…

Can any system, market or sector, for example, that is directly and exclusively supported by trillions in fiat money creation and decades of artificially repressed (and unnaturally low) interest rates by definition be labeled “free market,” “natural” or even “capitalistic”? 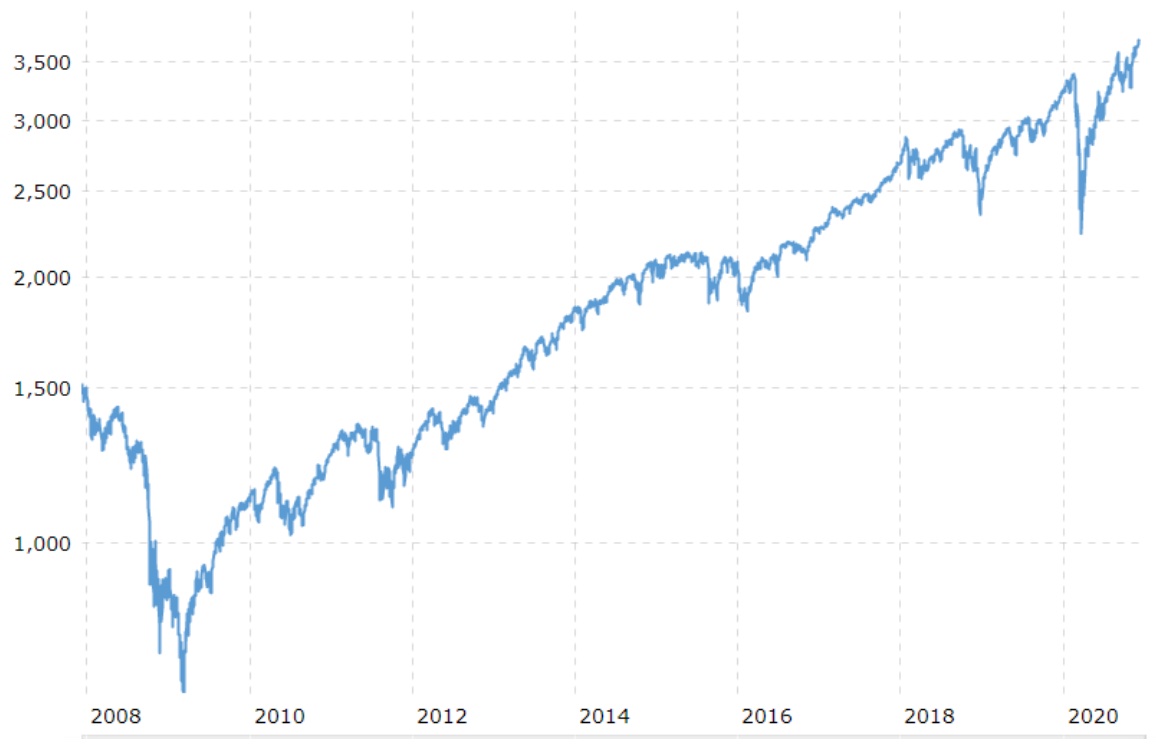 Whether you be in the top 10% or the bottom 10%, the answer to such primary questions is empirically obvious.

Such asset price inflation (i.e. bubbles) in everything from tech stocks to beach front real estate is not symbolic of the lauded and natural “Darwinism” of competitive, free-market capitalism.

Instead, such bubbles for the top 10% and the consequent wealth disparity that followed for the rest of the country are dangerous indicators of a kind of post-modern feudalism wherein a questionable cabal of policy makers subsidizes a distinct minority of beneficiaries and then calls the result “economic stimulus” as the rest of the country gets poorer by the day. 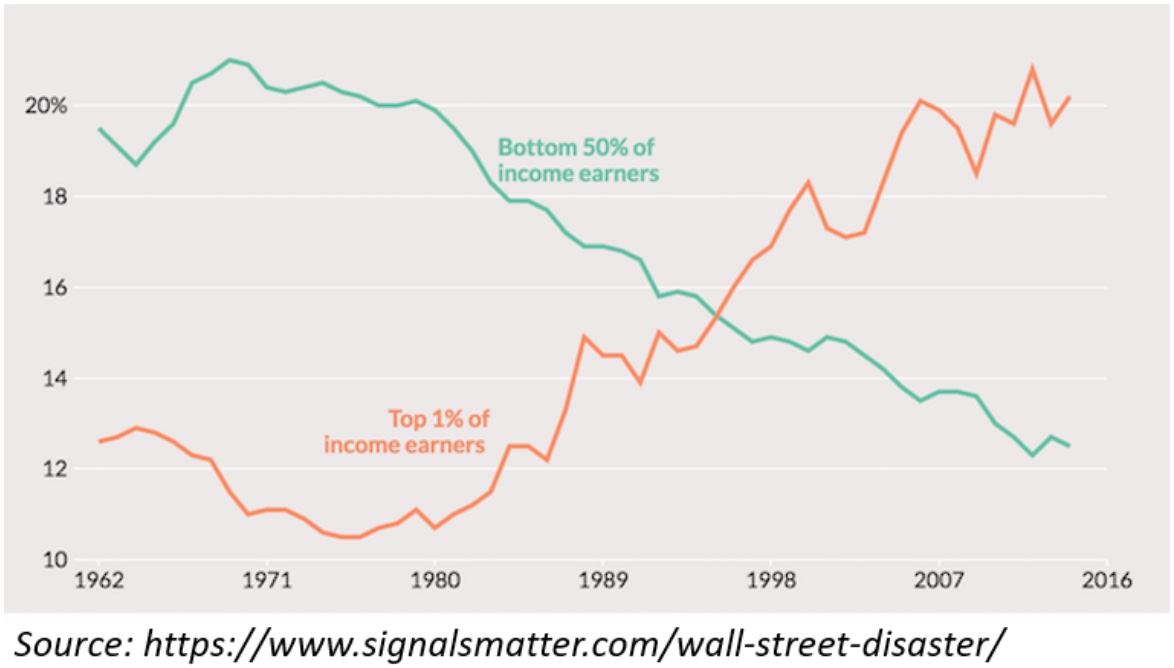 But again, is that capitalism?

Capitalism, whether defined by Adam Smith or abused by Gordon Gecko, is a dynamic, full-body contact sport of almost blood-thirsty competition played on a level playing field of new ideas, equal capital costs and individual effort.

In addition, true capitalism, the kind our fathers knew, was equally designed to create a broad rather than narrow class of winners and prosperity over time.

Do the above charts suggest a broad class of winners?

Capitalism, of course, should reward executives. But by how much?

Is such data a sign of an evolving capitalism or an indicator of something far more disturbing?

Fair Competition vs. A Rigged Game
Unfortunately, there are other and increasingly clear signs of rigged policies (from the Fed, Congress, SEC or White House) which have less to do with fair competition and compensation—the keystones of healthy capitalism—and far more do with an extended yet media-ignored paradigm of favoritism—i.e. cheating.

Today, a kind of pseudo capitalism has emerged which is neither empathetic toward (or beneficial to) its host nation.

Instead, we have a distorted model of capitalism whose benefits and empathies are uniquely targeted to a singular (parasitic?) group of companies, individuals and markets.

For every member of Congress, for example, there are at least four financial lobbyists (from banks and big-tech) scurrying to influence (i.e. purchase) favorable policy decisions.

This suggests healthy capitalism is under the influence of bribery not policy, and backroom deals rather than fair competition.

Capitalism, when rigged, is no less disgraceful.

We see this rigged game playing out in real time as the weak majority get weaker and the strong minority get stronger in a backdrop that is not a capitalistic “survival of the fittest,” but rather a feudalistic survival of the best-connected.

Record breaking wealth disparity as well as the open and shameful disconnect between a tanking economy and a rising (Fed-supported) securities market is not an homage to capitalism, but rather open proof of its failure.

In March, it was the 4th most valuable auto company in the world, today it is now the most valuable, worth more than Daimler, Toyota and Volkswagen combined.

Or Apple. It took 12 years to get a $1 trillion market cap, but only 5 months to recently reach $2 trillion.

Are such growth stories a consequence of fair, legitimate and natural free-market capitalism, or have they enjoyed an unfair advantage from the policy jocks?

With online sales skyrocketing as citizens are locked at home, Amazon has hired hundreds of thousands of minimum-wage warehouse workers to keep boxes coming to your doorsteps.

We can applaud Amazon for its job creation and raising of the minimum wage.

But let us not forget the larger picture in which AMAZON has gamified municipalities through its absurd HQ2 plan which transfers wealth from city police, fire and school districts to its shareholders.

Nor should we forget that despite years of a profitless balance sheet and legal tax avoidance, Amazon’s share price bubble has allowed it to literally kill, gut and bury small businesses across the nation.

At the same time, by owning the rails and engaging in anti-competitive behavior while dumping products and prices due to their access to cheap capital (against which no other companies can compete), Amazon has slaughtered rather than leveled the fair “playing field” upon which true capitalism was designed to be played.

Instead, names like Amazon, Tesla and Apple have prompted openly pro-capitalist thought leaders like Scott Galloway to question whether the pandemic was created, or at least co-opted, for taking the top 10% into the top 1% while sending the remaining 90% downward.

Two Americas, Zero Capitalism
A recent study by the Robin Hood Foundation, for example, revealed that 32% of the people in New York, the homefield of Wall Street, have been forced to go to a food bank since the onset of the pandemic.

That’s more people in the Empire State seeking free food than those who possess a college degree.

Meanwhile, 1/3 of greater America is worried about paying their rent.

By pure math, we now live in a Dickinsonian backdrop by which it is the “best of times” for a tiny minority (from Face-shot real estate brokers to Facebook tech investors) and the “worst of times” for the broader population.

Is it truly fair to castigate the real America as “losers” in a so-called Capitalistic competition whose rigged rules and policies ensured who the winners would be before the game could even start?

The rigged game playing right under our noses in the U.S. is not free market capitalism, just as an S&P sitting atop a big, fat, $7+ trillion Fed air-bag, sure as hell aint a free market.

As a member of the Wall Street elite who benefited from such anti-capitalistic capitalism, I can’t ignore facts to alleviate a fake conscience.

The New Feudalism
As Galloway recently observed, “we are barreling toward a nation where 3 million lords are being served by 350 million serfs,” simply because US policy decided to favor corporations over populations as capitalism “collapses upon itself.”

Nor can this modern version of so-called capitalism rely on the “better angel” generosities of billionaires like Bezos or Musk to save the system.

The moral character of overpaid CEO’s will not bring the dying middle class back to its glory days.

Frankly, it’s up to the citizens themselves to get informed rather than angry.

America is falling not just because capitalism lost its way or policy-supported CEO’s lack the character and accountabilities of the past.

It’s because citizens and their lobbied (bribed) leaders—red, blue and purple–have lost their sanity and are screaming at each other rather than opening a single economics, math, ethics, history or anti-trust book.

Today, the crowd gets its education from tweets and twits, not informed thoughts, sound leadership and patient knowledge or actual book reading.

Bread & Circus, Fear & Division
This, of course, makes the mal-informed majority (i.e. the bottom 90%) easier to trick and manipulate.

Decision-makers on top, from ancient Rome to Herr Goebbels, have always understood, and hence exploited, such wide-spread ignorance.

In short, policy anti-heroes serve a mal-informed population a mixed cocktail of either: 1) bread & circus (from Netflix to celebrity virtue-signaling) or 2) fear (from “social-distancing” to COVID death rates) to keep the crowd ignorant, divided and afraid.

Today, most U.S. citizens are blind to the rudimentary basics of Fed policy, currency debasement, lobbying tricks, anti-trust principles, or even viral facts.

Thus, as the middle-class flounders and a new financial feudalism replaces genuine capitalism, the mad crowd has no idea where to place its madness other than at each other in an historically divisive era of identity politics replacing anything resembling informed and unifying politics or policies.

Such are the symptoms of modern feudalism. Get ready for more…For those who would also like to read fantastic articles from Matterhorn Asset Management CLICK HERE.