With the price of silver still trading below $15, there is a silver lining — silver demand has reached a three-year high.

The Silver Lining
By Maria Smirnova, Senior Portfolio Manager, Sprott Asset Management LP
May 6 (King World News) –  Since mid-2016, silver has faced a challenging investment environment. Over the past three years, silver has been underperforming gold, and the silver-to-gold ratio has steadily widened from its 30-year historical average of 67:1  to today’s 85:1. Last year, the silver price was affected by higher U.S. interest rates, a rising U.S. dollar, trade wars and robust U.S. equities markets. Today, with the price of silver hovering at $15 per ounce, we see tremendous investment upside — with little downside — given that we believe the metal’s tepid price performance masks very positive developments in the market.

Silver Demand Reaches Three-Year High
The Silver Institute’s World Silver Survey 2019, released in mid-April, revealed that demand for silver in 2018 reached a three-year high last year, rising 3.5% compared to 2017 levels. That demand growth was coupled with a 2.7% decline in supply. The primary demand driver was a notable recovery in retail investment, led by silver bar demand. At the same time, both silver mine supply and scrap supply retreated, which resulted in a 29 million ounce shortfall in the physical market…

The silver market has registered a physical deficit in six out of the past ten years, yet this has failed to move silver prices higher. This signals to us that the silver price has fallen victim of to silver “paper” market trading and weakness in investment demand. (The paper silver market most often refers to the silver futures market, which gives exposure to silver’s price without providing ownership of the physical metal.) 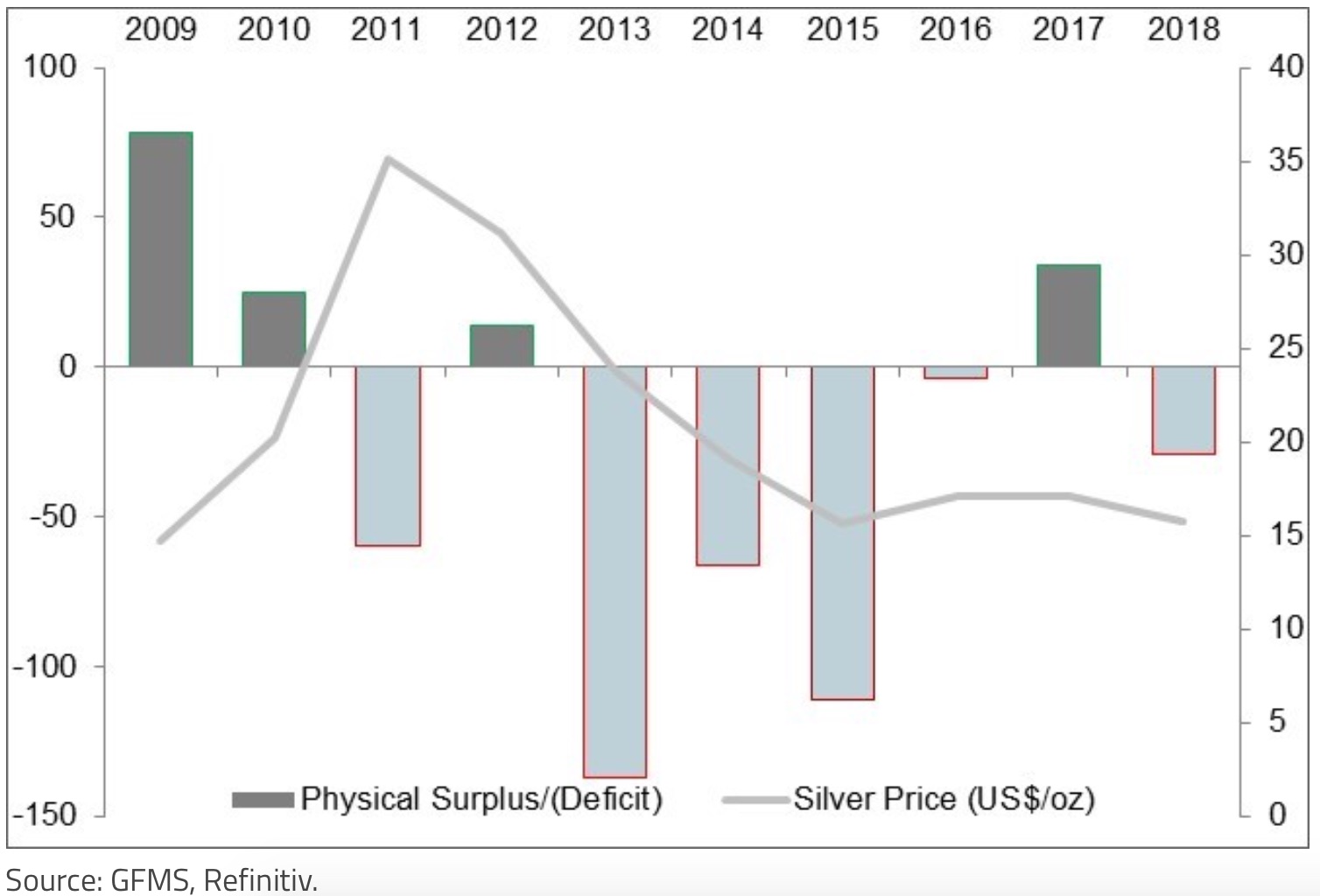 Physical Demand is Healthy
Physical demand for silver rebounded last year, rising 4% in 2018, boosted by a rise in jewelry and silverware fabrication, and a 20% jump in silver coin and bar retail demand. Industrial fabrication, which accounts for nearly 60% of total demand (1,033 million ounces in 2018), has been relatively steady for the last several years and has accounted for nearly 600 million ounces a year since 2012. Steady growth in demand from the photovoltaic sector has offset the decline in silver use for photographic applications, while the electronics, brazing alloys and solders sectors, and other industrial uses, have remained relatively stable. Looking ahead, projections estimate that these trends will remain steady, which makes the industrial-demand discussion unexciting right now.

In terms of growth potential, we see electric vehicles and solar demand as two areas with the potential for significant increases (which I discussed last year in Silver’s Critical Role in Electrification May Fuel its Rise). In the automotive sector, silver is used in small quantities, but in many components. Safety features, such as embedded silver-ceramic lines for windshield defogging, and infotainment systems are great examples. As hybrid and fully electric vehicles gain market penetration, overall silver consumption will rise faster due to silver’s wonderful electrical conductivity. Silver plays a critical role in the increasing sophistication of automobiles, which requires higher numbers of electrical and redundant systems.

Photovoltaic demand has grown considerably over the last decade as many countries (led by China,  the United States and India) strive to diversify power consumption away from fossil fuels. Solar panel installations have been climbing steadily and are projected to continue growing in the near term.

Figure 2: Photovoltaic Installation is on the Rise
History and Short-Term Forecast (2010-2021) 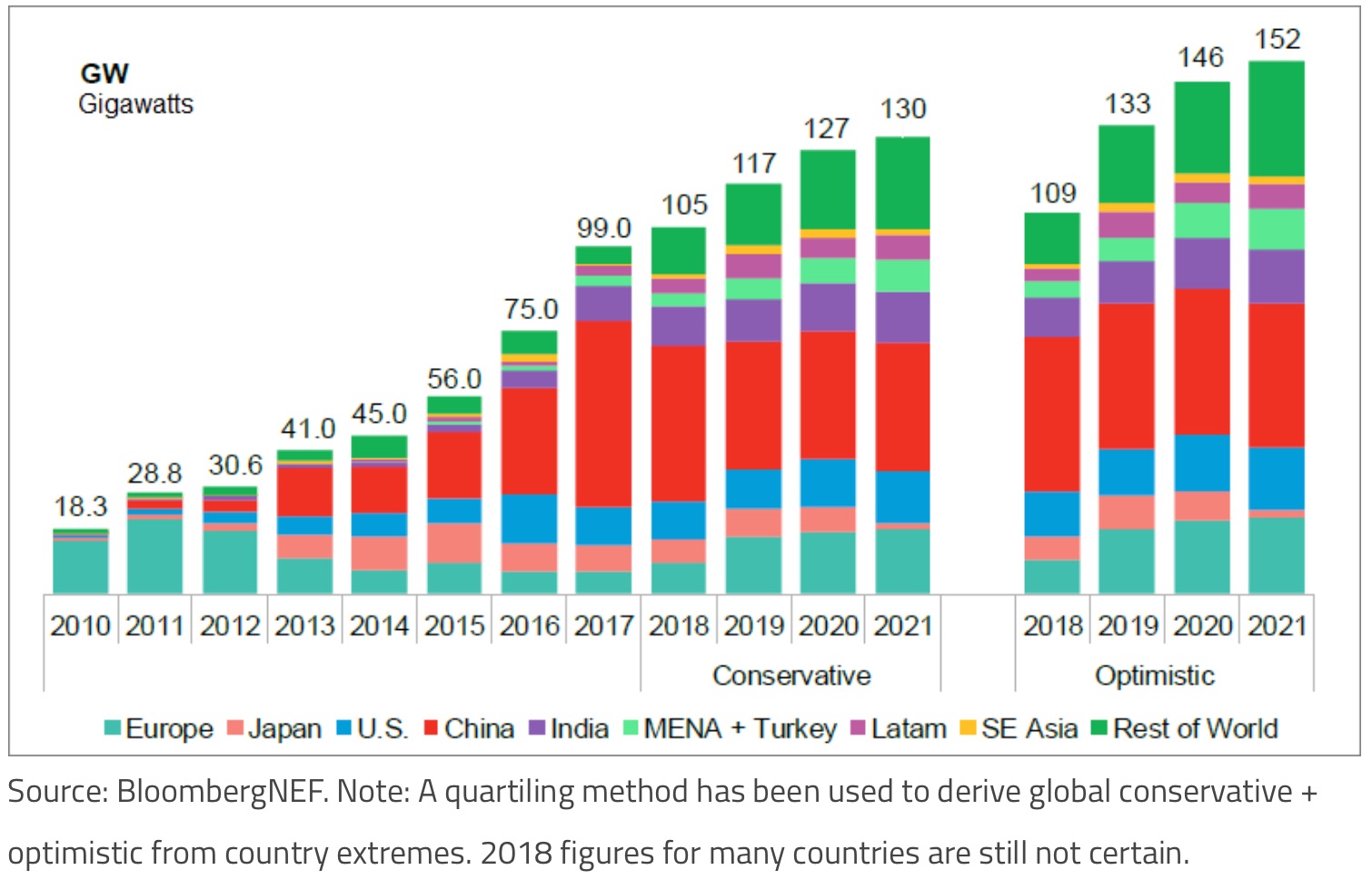 Despite its long-term growth trend, silver demand from the photovoltaic sector fell by 9% last year to 80.5 million ounces after double-digit percentage growth between 2015-2017. Despite record global installations in 2018, this was the first decline since 2014 and was due to ongoing thrifting of silver loadings. Thrifting and material substitution is a trend not inherently unique to silver but is present across commodities markets, as downstream manufacturers strive to lower costs.

Given silver’s superior electroconductive qualities are unmatched by other metals, we believe there is a limit on how much solar PV manufacturers can reduce silver loadings. At some point, performance and efficiency losses will begin to outweigh the benefits achieved from lower raw material costs. Silver still accounts for close to 20% of total module costs and while we expect further thrifting efforts, we are confident of silver’s ongoing, critical role. As governments across the globe continue incentivizing PV installation, solar will continue to play an essential role in silver demand.

India’s Cultural Affinity for Silver
A discussion of global silver demand is not complete without mentioning India’s prominent role as a key consumer of the metal. The country’s silver bullion imports increased 36% year-over-year to 223.7 million ounces in 2018, representing nearly 22% of total demand. Domestic mine supply added another 25.2 million ounces.

For the average Indian citizen, silver is about 80% cheaper than gold and a far more affordable investment or gift. India’s silver consumption in 2018 was driven by jewelry and coins for wedding season and festivals, as well as investment demand due to lower prices. India is now the largest single country consumer of silver jewelry and silverware, with those two segments tripling in the last decade.

Why is Silver Supply Stagnant?
Physical silver supply has been declining over the last several years due to three reasons.

1) First, while mine production was growing steadily after the global financial crisis in 2009, it has been stagnant since 2015 and has registered declines over the last two years, losing nearly 38 million ounces of annual production. This has been the result of under-exploration and under-investment due to declining silver prices and the lack of available financing for junior mining companies. We scour the world silver market for new investment ideas every day and continue to be surprised by the lack of significant new silver and gold discoveries.

2) Second, scrap supply, which is very price elastic, has declined, shedding about 100 million ounces per year since 2012.

3) Third, government sales by central banks dried up in 2014 when prices dropped, and reports indicate that governments together hold only about 90 million ounces.

Macroeconomic Outlook Drives the Price
Everything we know indicates that the silver market will continue to be in physical deficit or at least closely balanced. We do believe that there is one aspect of the equation that has the potential to propel the silver price higher: investment demand in the form of coins, bars, and/or ETFs, as well as the trading of silver contracts by non-commercial entities. Of these, we believe that the silver futures market is having the biggest impact on silver prices: as shown in Figure 3, there is a clear correlation between net speculative positions (longs net of shorts) and the price of silver. 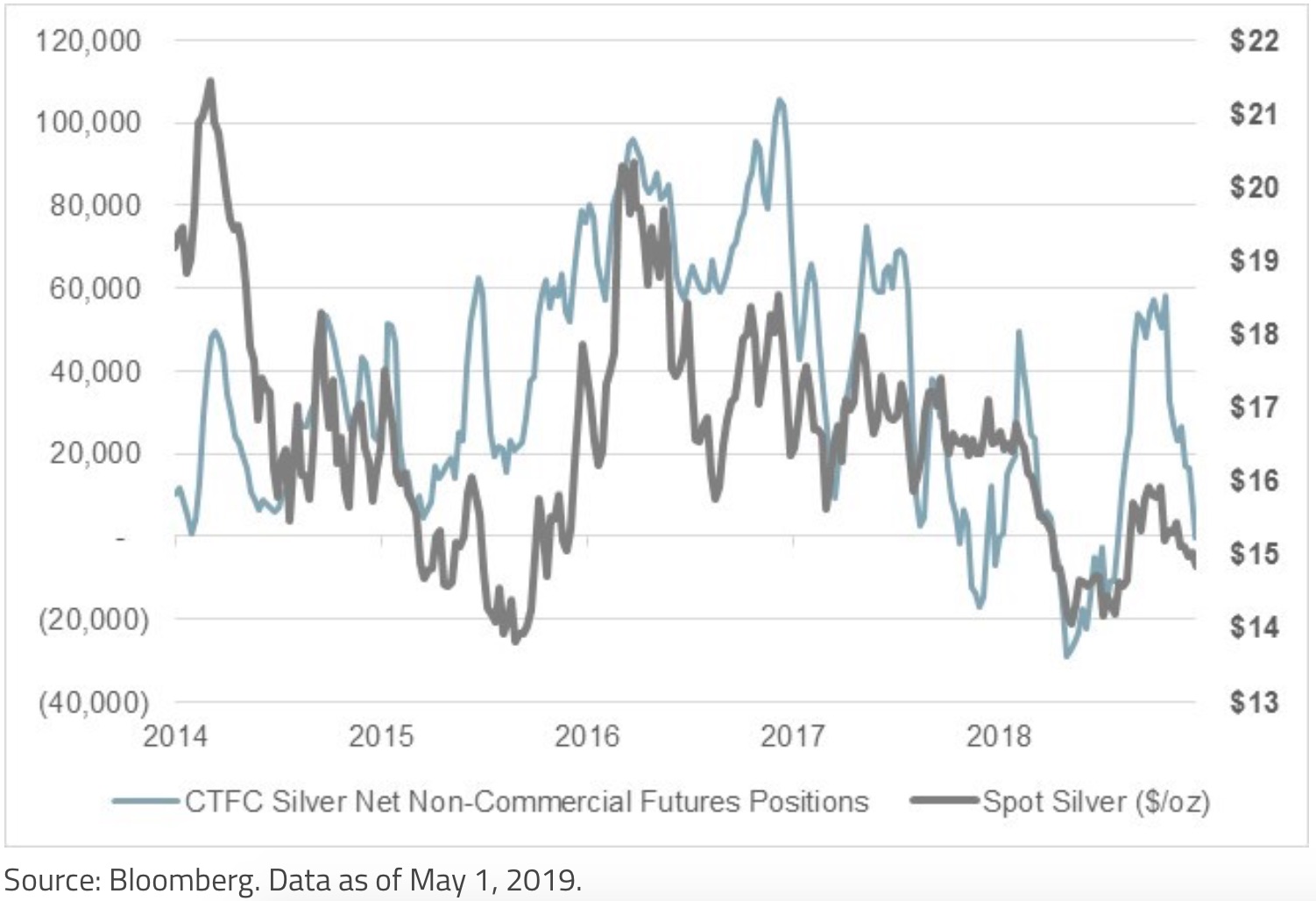 For example, in early 2016, speculators took on more long bets, driving the silver price up. Since then, traders have been increasing short positions and this has depressed the price. We believe this short trend has been due to a growing U.S. economy and the general U.S. equity market (the S&P 500 Index) being in a multi-year uptrend.

We strongly believe that both gold and silver are valuable hedging tools in times of uncertainty and volatility. When the S&P 500 plummeted 20% in the three months to Christmas Eve of last year, silver gained about 12% from its lows. At ~$15, the silver price is close to levels not seen since 2015 and we see little downside risk at this level. Any future economic hiccups and market sell-offs are likely to encourage investors to look for safe havens and alternatives to traditional financial assets. 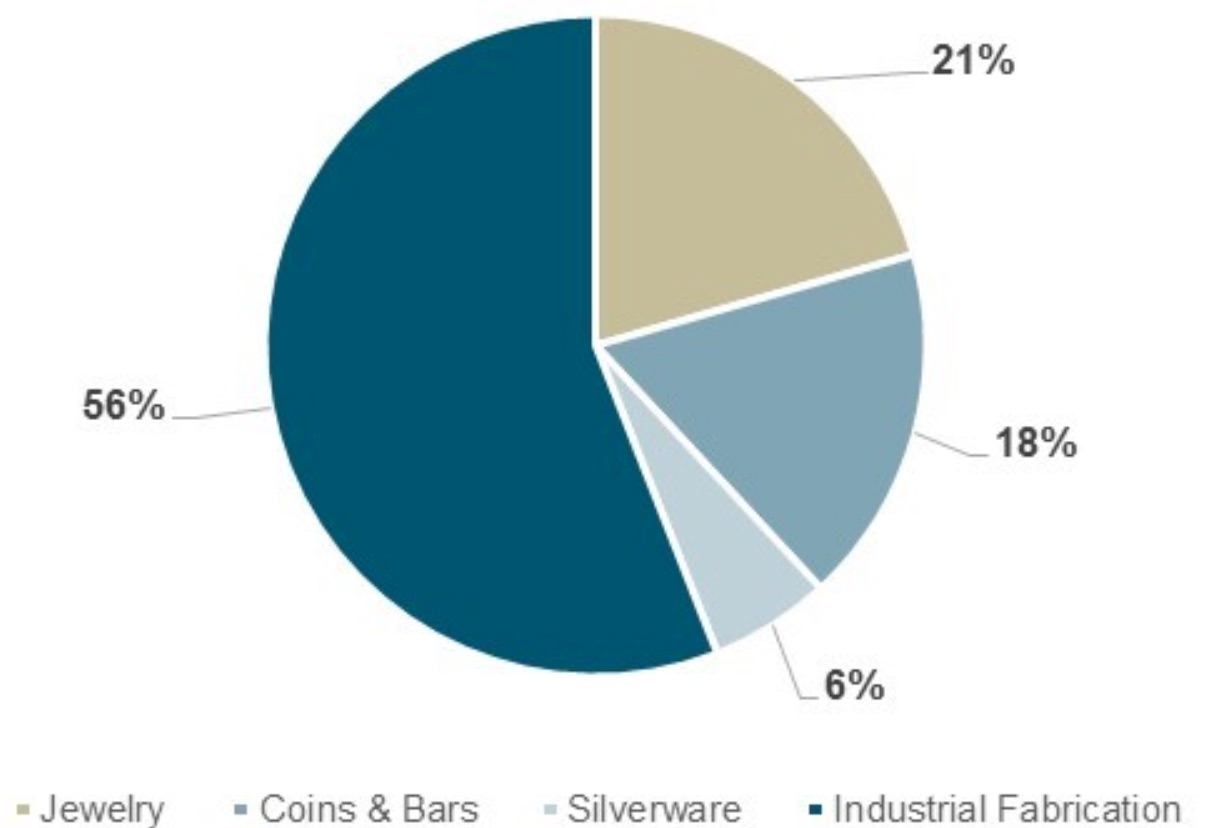 ***Also just released: Greyerz – Gold & Silver About To Kickoff The Most Spectacular Bull Markets The World Has Ever Seen CLICK HERE TO READ.

An Astonishing Look At The War In Silver And Commodities

Gold Is Finally Breaking Out On The Upside