With the Dow surging and the 30-Year bond market tumbling ahead of the Fed decision, today King World News covers the secret operation behind closed doors and a clear sign the monetary system is now in danger.

James Turk:  “Here is more proof, Eric, that the gold market is out of whack. The table below presents the settlement prices for Comex gold at the Friday close last week.

You can see that it is cheaper to buy gold for delivery in December than it is to purchase the spot contract. Gold is in backwardation, which of course is abnormal.

The following table shows the settlement prices for yesterday. The backwardation eased somewhat in that only November delivery is below spot, but Comex has been reporting anomalies like this for a while now.

Backwardation should never exist because anyone with physical gold can deliver it today against the spot contract and buy it back with the December contract. An arbitrageur can take advantage of this opportunity to profit in three ways…

“First, you earn a profit by selling your physical gold today and buying gold back at a lower price with the December contract. Second, you avoid storage fees while waiting for your gold to be delivered in December. Third, you have use of the dollars you receive from the sale of your physical gold, which can be invested until you need them in December to pay for purchasing your gold back.

It is remarkable that no one is stepping in to profit in this way. But there is a reason why they are not doing so.

Profit of course comes with risk, even in an arbitrage. And here the risk is that you might not be able to get your gold in December.

No One Wants Counterparty Risk

In other words, if you take the arbitrage, you are turning your gold – a tangible asset – into a financial asset with counterparty risk. And no one wants to take this risk given the perilous state of government finances around the globe, reckless policies being taken by central banks, and strains in the global banking system because of nonperforming loans and the high leverage used by banks. But aside from these risks, there is another message from this backwardation.

Gold has been in backwardation in London more often that not since January 2013 when the Federal Reserve began QE3. Clearly, central banks have been intervening in the gold market in order to cap the price. The last thing they want is the gold price to rise when they are overtly debasing national currencies.

But these interventions by central planners cause distortions in the market. Backwardation is one of these distortions.

The Collapse Of The London Gold Pool

The important point, Eric, is that their intervention can only go on for so long, until their gaming of the market system blows up – just like it did when the central bank cartel called the London Gold Pool collapsed in March 1968.

From the beginning of that decade, the pool was capping the gold price at $35 per ounce. But the market kept buying all the physical gold being thrown at it by the pool because the smart money back then understood that gold was worth more than $35 per ounce.

The same thing is happening today, Eric. The market is absorbing all the physical metal the central planners can scrape out of central bank vaults because the buyers – the smart money – know that gold is worth a lot more than the price at which it has been trading, which is a completely artificial price resulting from central bank intervention.

When the London Gold Pool failed back in 1968, it launched gold into a 12-year bull market. Gold’s next bull market will be launched when the central planners fail again, and that moment seems to be rapidly approaching.

When gold is in backwardation, it is a clear warning sign that the monetary system is in danger. And now even the Comex – which is basically just a paper market where relatively little physical metal trades – has been reporting backwardation. There is an important point to make here.

Comex Vaults And The Secret Operation Behind Closed Doors

The hunt for physical metal has become so intense that the bullion banks are even draining Comex vaults, which are now reporting a record low amount of physical gold available for delivery relative to the outstanding number of contracts to deliver gold. The abnormal spreads reported in the above tables are the result.

What it all means, Eric, is that if you own physical gold, be thankful. Paper gold promises to deliver physical metal at some future date can be created out of thin air in near limitless quantities. But they are nothing but promises, which can mean little, particularly like now when physical gold is increasingly hard to come by, even more so when purchasing large quantities.

So it may be that another March 1968 event is just around the corner. It all depends on how far central banks are prepared to distort the markets with their interventions by keeping interest rates near zero while emptying their gold vaults.

While we can’t look into those gold vaults because the central planners operate in secret behind closed doors, the backwardation is telling us that either those vaults are empty, or that the central banks are shutting the vault door because they are becoming increasingly unwilling to put more physical metal into the market. Both of these alternatives are of course very bullish for gold…To hear more of what James Turk has to say on this subject CLICK HERE. 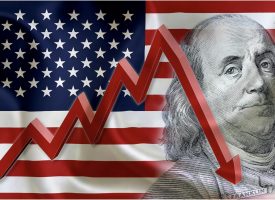 James Turk – Gold & Silver Pullback Not Surprising But Look At This Shocking Chart!