The Reason For Today’s Big Rally In Stocks, Plus An Important Note On Gold

Here is the reason for today’s big rally in stocks, plus an important note on gold.

They Will Choose Door #2
November 26 (King World News) – Here is what Peter Boockvar wrote today as the world awaits the next round of monetary madness:  For markets and the short term direction (emphasis on ‘short term’), it’s pretty simple. With monetary policy, what will Vice Chair Rich Clarida say tomorrow and what will Powell discuss on Wednesday? With the real fed funds rate only back to zero, will they now buckle from their chosen path of achieving around a 3% fed funds rate sometime next year or will they reinforce their desire for that level but alter the timing of getting there or will things continue according to the dots? I say they will choose door #2…

IMPORTANT:
To learn which junior explorers is looking to drill some of the best holes in the world CLICK HERE OR ON THE IMAGE BELOW

On the trade side, will the Trump/Xi meeting be productive in that both are willing to make a deal satisfactorily to both and which will remove the prospect of a jump in the latest tariff rate to 25% from 10%? Flip that coin.

Sour Sentiment
With the sentiment sour based on the last week’s AAII number, the below 40 print in Bears in II, the 9 level in the CNN Fear/Greed index, and the single digit Daily Sentiment Index for the S&P 500 seen last week, along with a very oversold market on a variety of metrics, we are set up for a short term rally if the monetary and trade conversations give the markets what they want. Again, I emphasize ‘short term.’ The big picture headwinds of 1)still tighter monetary policy assuming rates still rise along with a shrinking Fed balance sheet in addition to a major reduction in ECB and BoJ asset purchases, 2)slowing global growth, and 3)likely peak in US corporate profit margins will remain into 2019.

Assuming this was a front loading of commerce ahead of the tariff rate uncertainty as of January 1, Hong Kong exports in October jumped by 14.6% y/o/y, well more than the estimate of a rise of 9.4%. Exports to China were up by 18% y/o/y and by 10% to the US. Imports were up by 13.1% y/o/y, also above the forecast of up 10.2%. The Hang Seng rallied by 1.7%, also helped out by hopes the Fed will blink. Chinese stocks in Shanghai fell slightly.

Japan
Japan’s manufacturing PMI in November fell to 51.8 from 52.9. That’s a 2 year low as “the rate of output growth weakened and new orders for goods declined for the first time since September 2016” said Markit. They went on to say that “The underlying trend appears to be skewed to the downside. Indeed, the fall in new orders is a worrying development as easing global growth momentum coupled with a weak domestic backdrop could spell further demand woes for Q4. In fact, survey data suggest that manufacturers have already begun to pare back expectations, as confidence fell for a 6th consecutive month.”

Again, I get the goals of facing up to China and their theft of our technology but the chosen path of tariffs continues to slow global economic activity.

German Slowdown
More to this point, the November German IFO business confidence index fell to 102 from 102.9. The estimate was 102.3 and this is the 2nd lowest print since March 2017. Both Expectations and the Current Assessment fell m/o/m and the components of manufacturing, services, trade and construction all dropped from October. IFO was pretty succinct in describing the situation, “The German economy is cooling down.” Notwithstanding the miss, the euro is up along with European bourses on hopes that Trump and Xi have a productive meeting at the end of the week and maybe the Fed alters their stance.

ECB
The slowdown in Europe of course puts pressure on the ECB as they are one month away from ending QE outside of reinvestments. But, it’s pretty clear that the ECB wants out of their Defcon 1 monetary policy. Executive Board member and German citizen Sabine Lautenschlaeger reaffirmed her desire for an end to QE as continuing it to offset slowing growth “wouldn’t bring significant additional benefits, but it would increase negative side effects.” She also said that QE “shouldn’t be part of the normal policy toolbox.”

Peter Praet, the ECB chief economist, is also trying to get himself out from under QE by saying, “The end of net asset purchases is not tantamount to a withdrawal of monetary policy accommodation.”

ECB Governing Council member Ewald Nowotny is also chiming in by saying “The normalization of the Eurosystem’s monetary policy, which also includes raising interest rates, poses little risk to financial stability. Given the reasonably robust economic recovery, a well communicated and predictable exit might even benefit the health of insurance companies, pension funds and banks by improving net interest margins. The alternative, market interest rates that stay very low for a long time, might even impair financial stability.”

We now have this ECB member along with the BOJ that have finally acknowledged that their policy of NIRP and massive QE has damaged the profitability of their financial institutions. If only this occurred to them earlier but better late than never.

This all said, expect more ECB TLTRO programs in 2019 as that will be the chosen ECB tool for dealing with any economic slowdown I believe.

Italy
Lastly, Italian bonds and stocks are rallying sharply as the Italian government is showing some signs of backing off from the intense pressure of the EU on the Italian budget. The Italian government is possibly going to change its 2.4% budget deficit ratio goal in 2019 to a lower figure. The MIB index is up by 2.8%, the Italian 10 yr yield is down by 18 bps to 3.23%, the lowest since the last day of September and the Euro STOXX bank index is rallying by 2.8%.

Gold
There was no COT report last week because of the holiday, but the chart below was from the previous week and it shows commercials aggressively moving toward the long side of the gold market.

Commercials Dramatically Reverse Short Positions, Close In On Being Net-Long The Gold Market 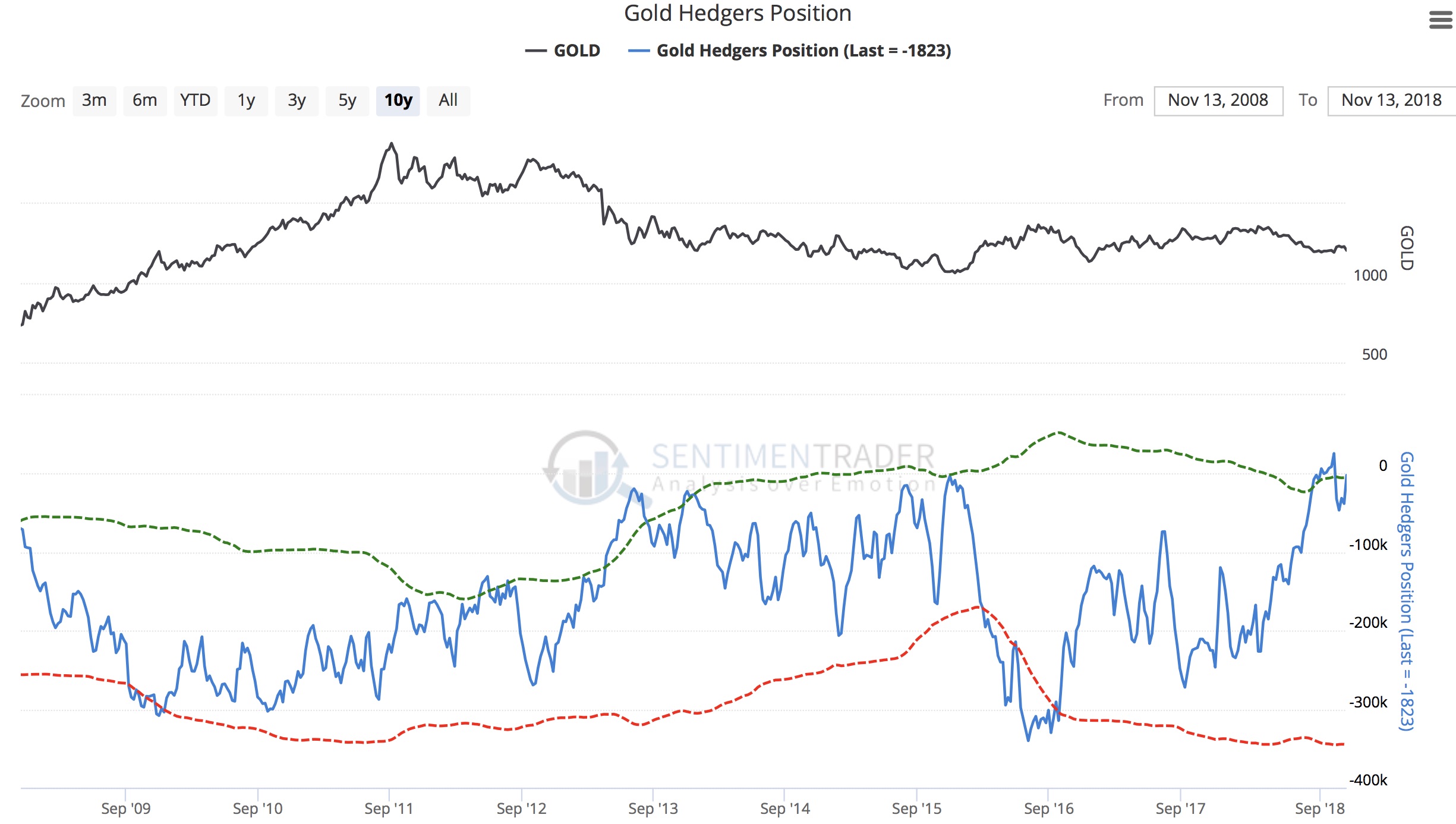 Eric King:  “Ivan, your company just put out a release today on Sombrero, which now looks like it could be a monster deposit.”

A 50 Million Ounce Gold Equivalent Target
Ivan Bebek:  “Eric, this project is massive.  As you know, in our press release we compared Sombrero to Las Bambas. So we are going to drill a copper-gold target equivalent to a 50 million ounce gold deposit being mined nearby with all the same rocks.  Sombrero is the kind of project an investor dreams about being part of in terms of size, and I have to say that even after all of the great successes in my career, both as an executive and as an investor, I never imagined that I would come across a project with this much upside that’s never been drilled before. 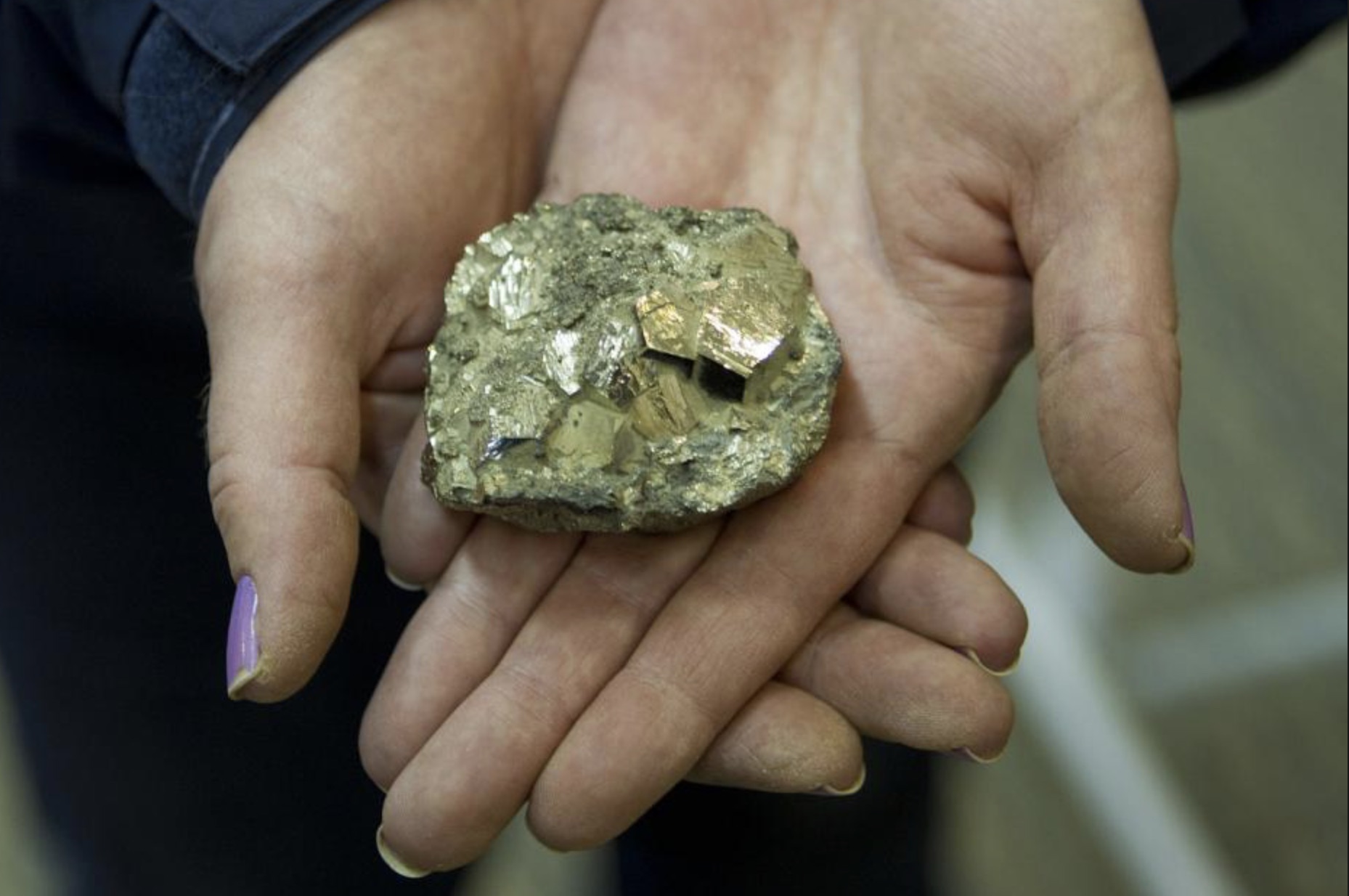 12 Month Exploration Season
Eric, this is a once-in-a-lifetime opportunity because of the many remarkable similarities it has to the neighboring major mines. It also has road access and high tensile power lines that are on the property, and there is a $2.4 billion proposed railway that will run in the region that would allow for easy and highly economic transfer of the minerals.  And this is important, Eric, unlike our major Canadian projects, Sombrero has the benefit of a 12 month exploration season.

Drilling Anticipated To Commence In Q2 2019
We have literally only scratched the surface in terms of identifying what might well be the next globally significant deposit in the last decade, and we have a plethora of additional targets to sample prior to our inaugural drill program that will take place as soon as the drill permits are complete, which we anticipate will be in the second quarter of 2019. Auryn Resources symbol AUG in Canada and the US. To read today’s press release CLICK HERE.