The mighty fall of the consumer is leading a much bigger collapse.

The Rise And Fall Of The Consumer
June 30 (King World News) – Crescat Capital:  After experiencing the largest government-financed consumption boost in history, household demand for goods and services is poised to fall off a cliff. The US economy simply cannot handle the Fed’s continued monetary tightening. This is the onset of a vicious stagflationary environment. The unprecedented combination of excessive debt, the bursting of speculative asset bubbles, and the persistence of inflation due to structural supply imbalances makes the current economic and market environment truly precarious. A major contraction in consumer demand is imminent. These factors will soon pressure the Fed into a policy dilemma.

The Fed is facing one of the worst predicaments of its existence as it continues to raise interest rates into an economic downturn. The problem is that sooner rather than later it will be forced to relent and inject liquidity into an already inflationary environment.

The historically elevated cost of living, surging mortgage rates, and tightening financial conditions are about to trigger a collapse in real household spending. The decline in consumer sentiment to all-time lows is already forecasting a high probability of recession including corporate profit margins that are ripe to plunge from peak unsustainable levels and lead to rising unemployment. 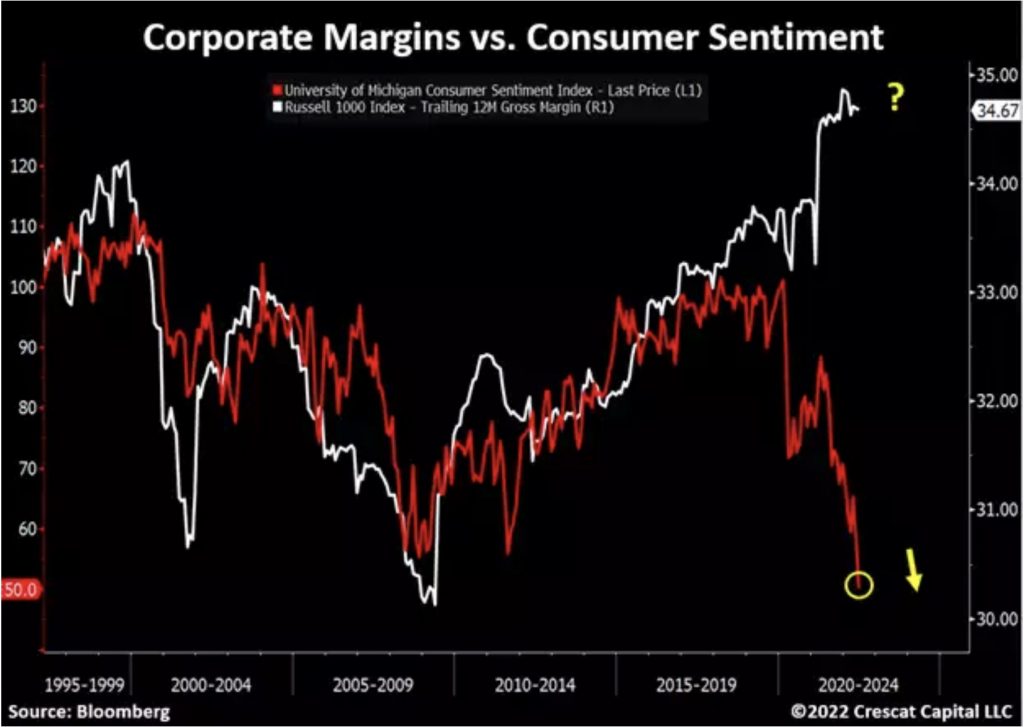 Consumers at a Breaking Point
While workers are starting to make more money, the growth in salaries is not outpacing inflation. In real terms, wages are declining by almost 4%, worse than the Global Financial Crisis.

After a historic surge, saving rates are also plummeting. Relative to disposable income, they are now at the lowest level in 14 years. All these factors combined are likely to cause real consumer spending to fall significantly. 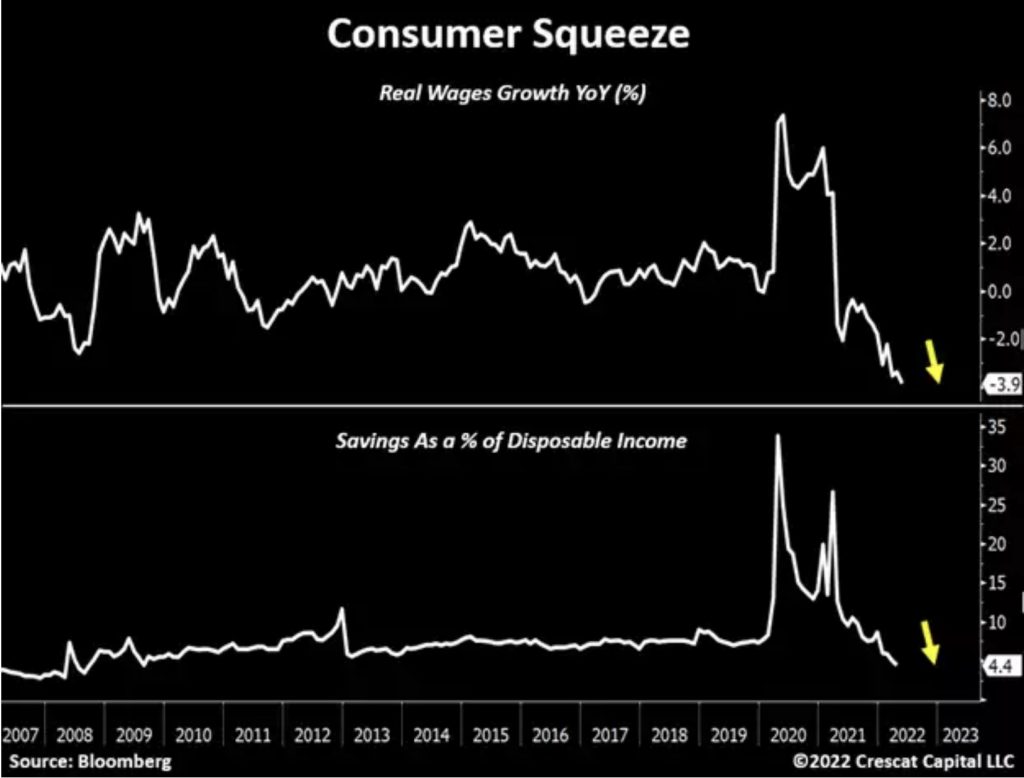 Drawdown in Household Buying Power
The recent decline in equity markets should also drastically impact consumer demand. US stocks have already lost $13 trillion in market cap since the downturn started. That is already a greater capital loss than during the Global Financial Crisis and Covid Recession. 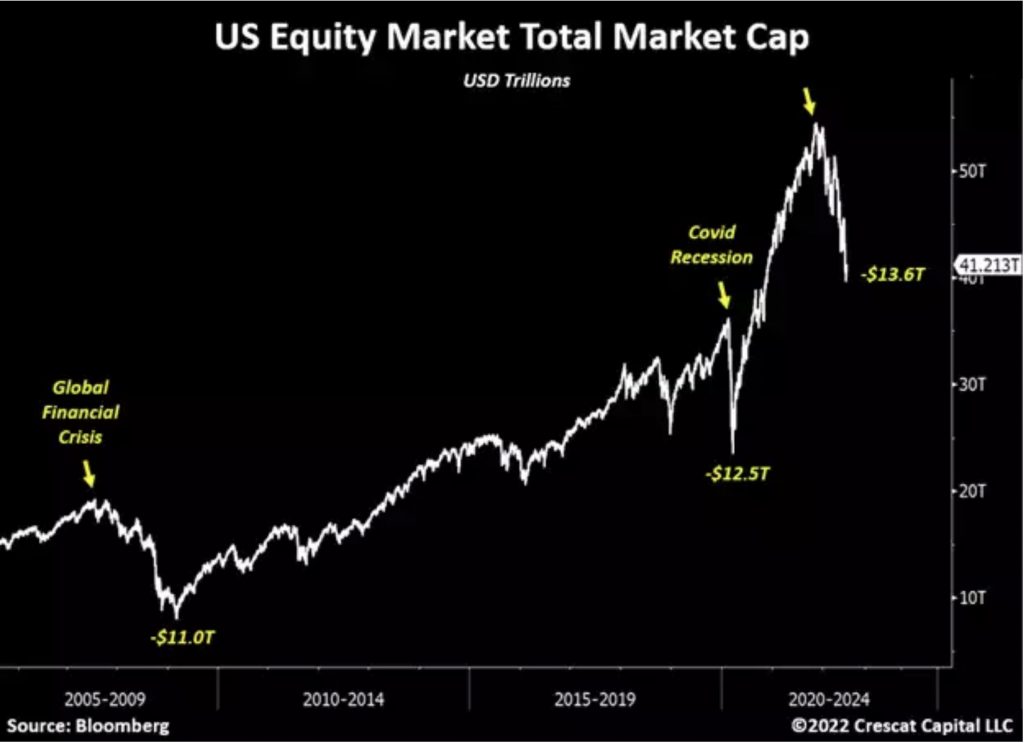 Corporate Margin Squeeze Still Ahead
In addition to the consumer demand side risks laid out above, today’s inflation problem is likely to compress profit margins significantly from record levels. US companies are being challenged by a combination of systemic issues:

The recent strength of the dollar is also an important factor to consider. History shows that as the US currency appreciates relative to its peers, significant declines in corporate profits tend to follow. The chart below illustrates this relationship between the Dollar Index (inverted) and the Citigroup Global Earnings Revision index. Analysts are slow to incorporate macro factors like currency changes into their earnings estimates. As a result, we expect US multinational companies to be subject to material negative earnings surprises for the June quarter now ending. 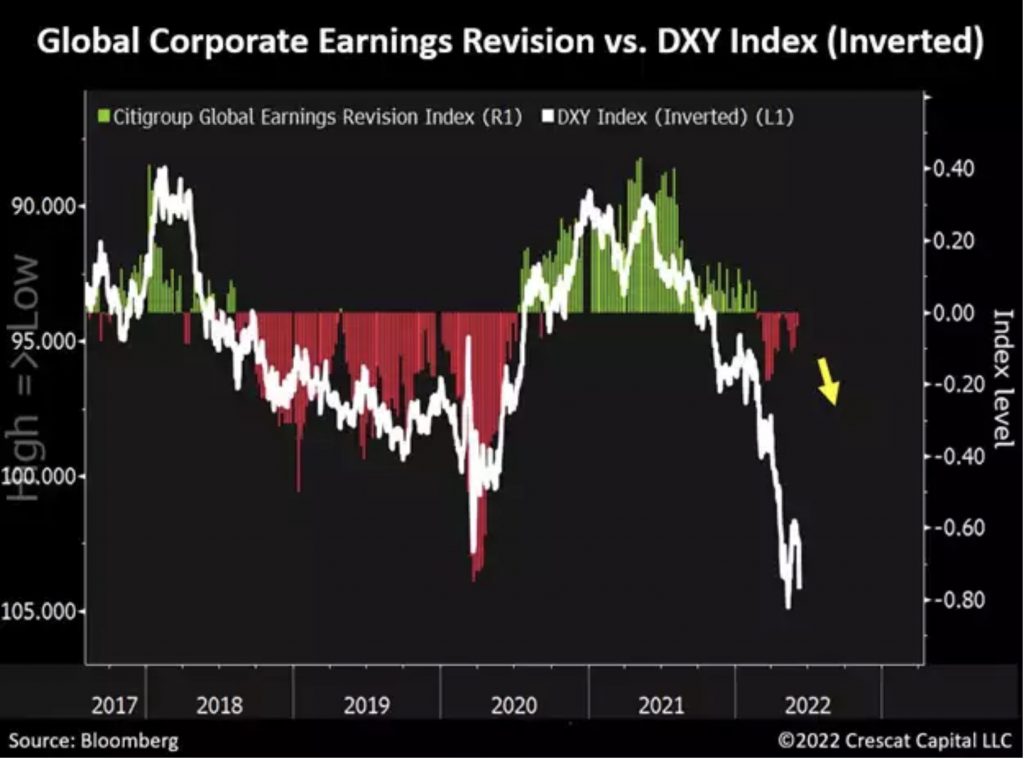 Mortgage Rates Yet to Impact Household Spending
For those who believe consumer demand will remain strong after 30-year mortgage interest rates doubled in the last six months, we think it is time to reconsider that view. According to Goldman Sachs, the median monthly payment of a 30-year mortgage is up 56% year-over-year. We strongly believe this factor alone will handicap household spending in the months ahead. 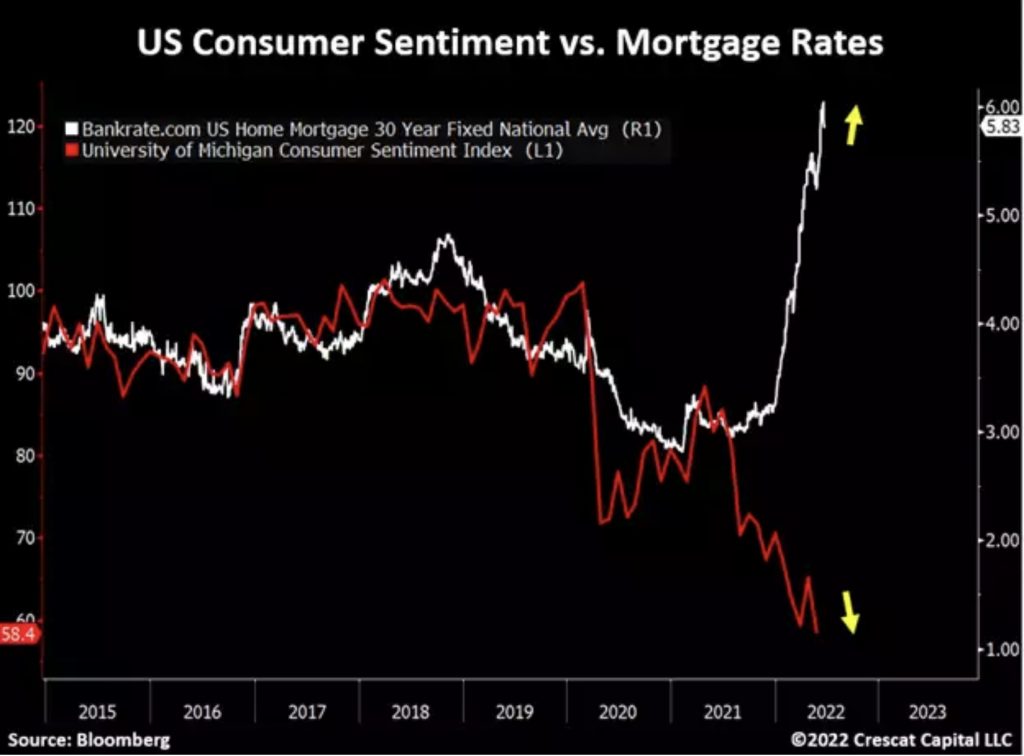 A Rise in Unemployment Rate is the Next Development to Unfold
The rise in part-time employees for economic reasons likely portends significant weakness in labor markets ahead. A similar divergence with unemployment rates also preceded the Global Financial Crisis. As corporate earnings deteriorate, we believe the labor market will suffer accordingly.

Note that initial jobless claims have already been increasing since March. Labor markets are a critical piece of the macro puzzle. If employment activity slowdowns from here, the Fed will be in a policy predicament. 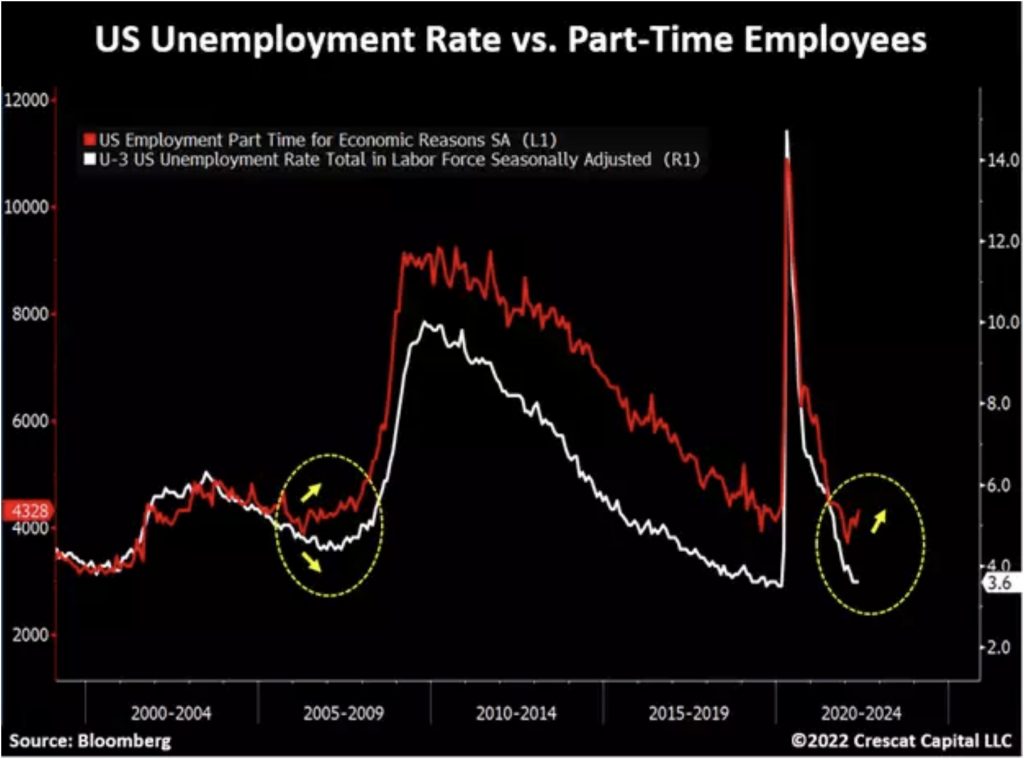 Backward Looking
As usual, Wall Street analysts are looking in the rear-view mirror. After a stimulus-led surge in corporate earnings to record levels, they are projecting another 35% spurt over the next 3 years giving little to no consideration to the monetary tightening and fiscal stimulus falloff. Our view is that corporate profits will nominally contract over this period, while in real terms, we expect a substantial decline. 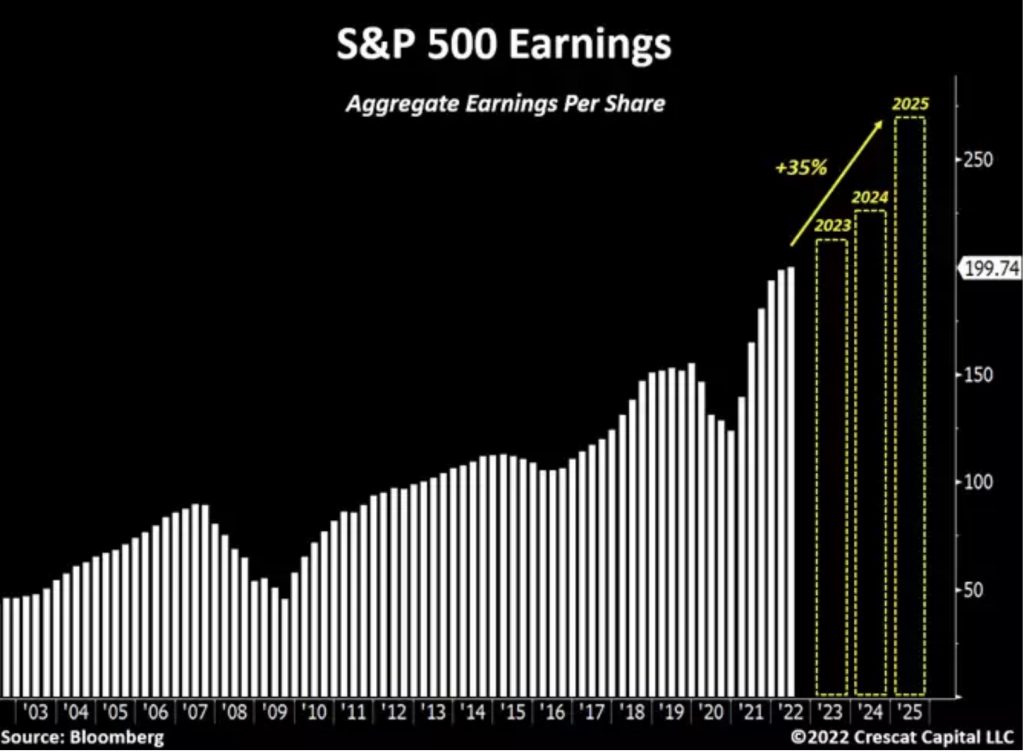 Corporate Profits Collapsed During the 1st Wave of Inflation
Looking back in history, at the very first wave of the inflation problem in the late 1960s and early 1970s, real corporate earnings contracted by almost a third. Such a level of decline is unimaginable for most investors today. 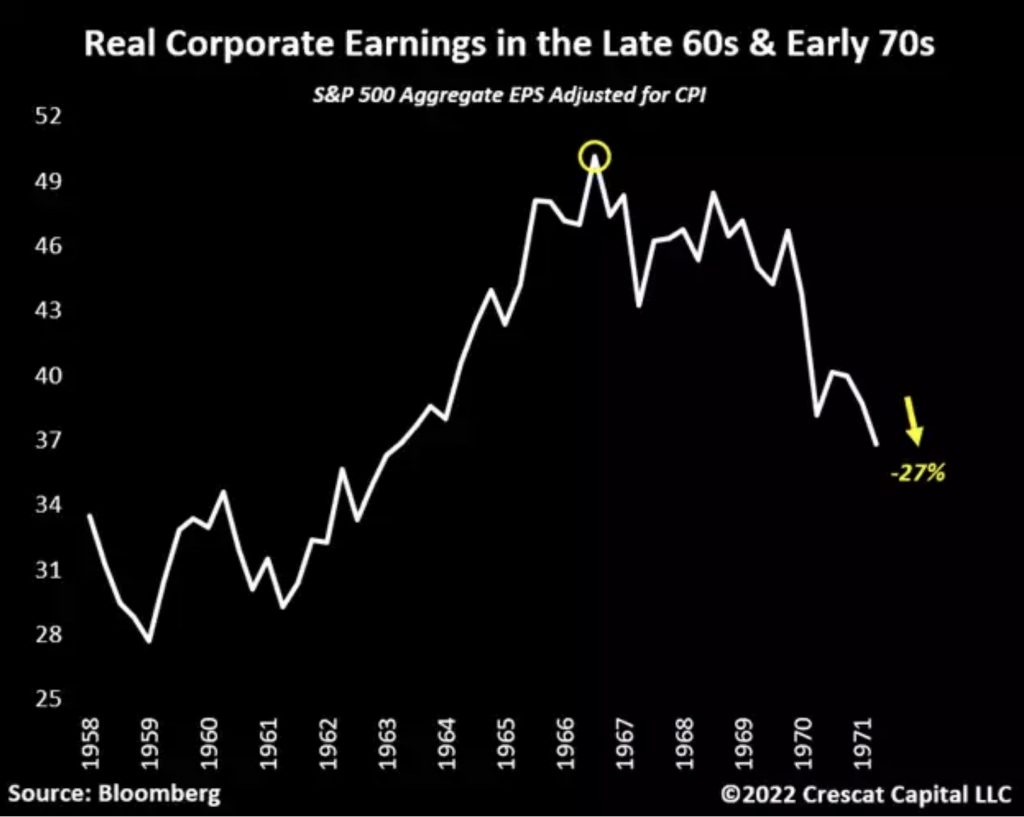 No More Free Money
The planned degree of monetary tightening today is a major concern. While we saw the same decline in corporate bond prices in March 2020 as we have over the last year, the difference is that back then, the Fed doubled the size of its balance sheet and the slashed short-term interest rate to 0% to address it. Today’s policy stance is quite the opposite. 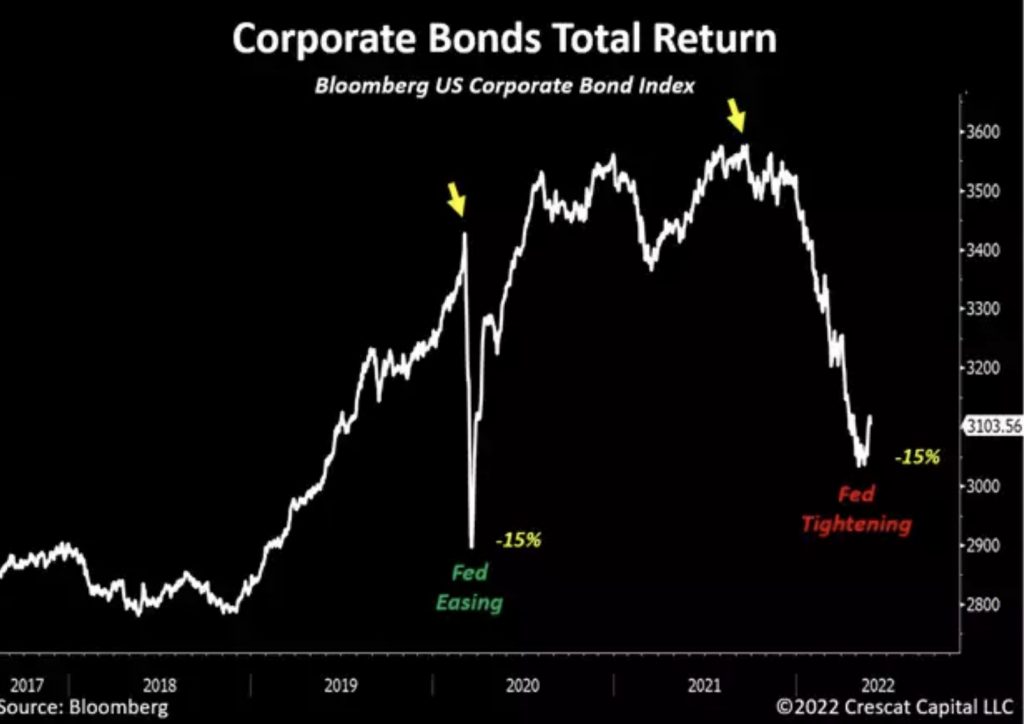 Significant Layoffs by Tech Companies on the Horizon
Among all technology stocks in the Russell 3000 index, only 10% of them remain above their 200-day moving average. This sector represents the largest part of the US economy today. If the decline persists, which we believe it will, the stock performance is likely to have a significant impact on the future employment plans of these companies. We are yet to see technology companies significantly shrink their labor force. While some layoffs have already started, we think it will become a bigger trend in the coming months.

Let us not forget that the bursting of the Tech Bubble 2.0 is only getting started. At the height of the dotcom frenzy in 2000, the technology sector’s overall market cap peaked at 21% of the US economy. Today, despite the recent selloff, this valuation measure is still at Tech Bubble 1.0 highs.  We believe the unwinding of this problem has much further to go. 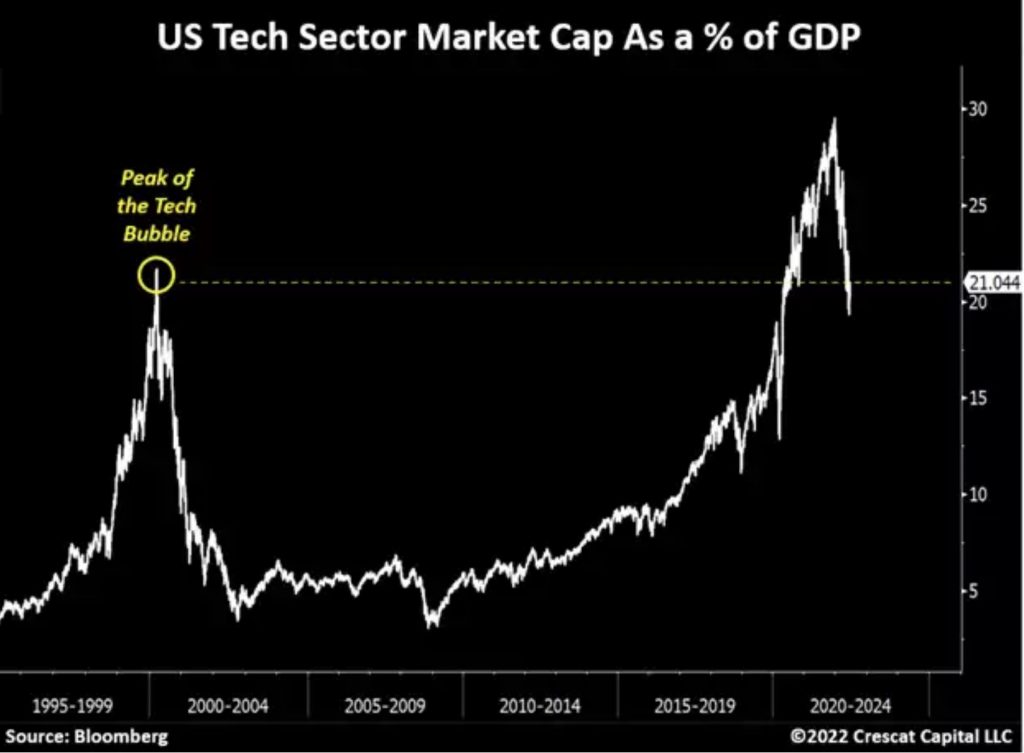 Tightening Financial Conditions
Tightening monetary conditions and the steep rise in the cost of capital will not only negatively impact consumers, corporate earnings, and overvalued financial assets, but it will also cause pain for highly indebted sovereigns.

The chart of the US 30-year yield has broken out from a 41-year macro downtrend. This is truly concerning from a leverage standpoint as the US economy remains in a deep deficit in both its current and fiscal accounts. 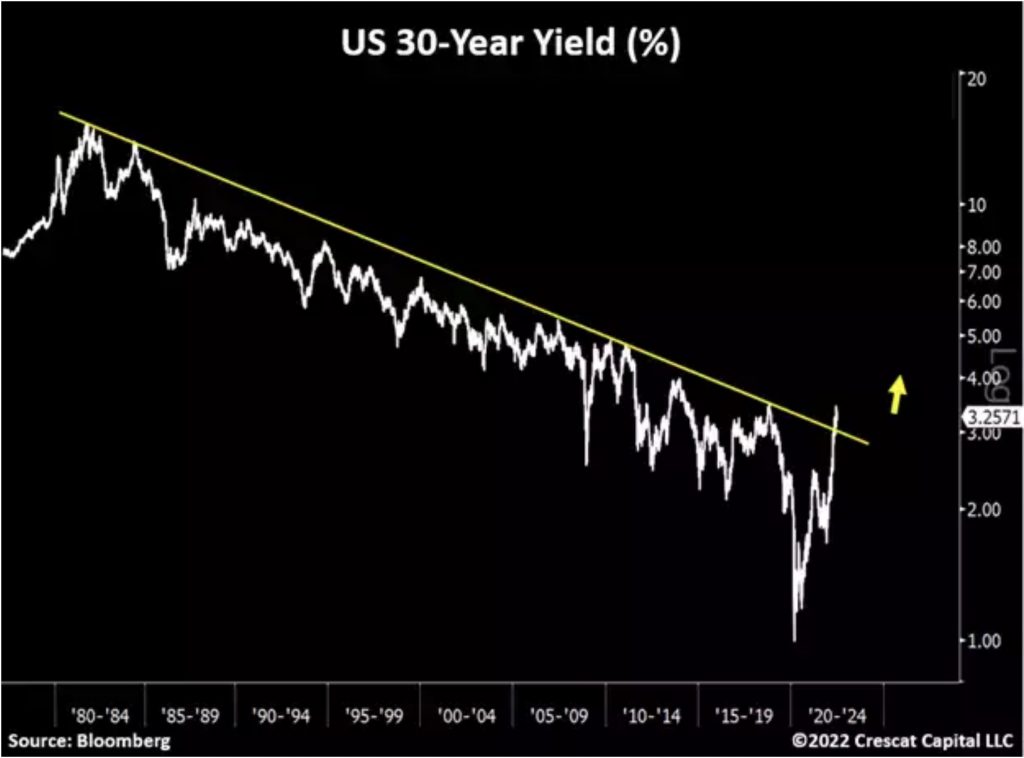 In the same way the Bank of Japan had to intervene in its bond market, we believe US policy makers will inevitably be forced to impose yield curve control to avoid a sovereign default. The likelihood of success of such policy is highly questionable and risks a monetary crisis given today’s high structurally driven global inflation levels. The stage is set for an incredibly bullish environment for hard-money-based assets over the long term. Precious metals are likely to play the starring role for investors as the most credible alternative to protecting real wealth in this sharply depreciating fiat currency environment. At the same time, the leading precious metals mining companies are likely to soon be entering a Golden Age of alpha generation.