The damage “will be epic.” shortages continue, plus look at what is hitting new all-time highs.

Chip Shortages Continue
October 5 (King World News) – Peter Boockvar:  A few days after we saw September auto sales total just 12.2mm vehicles on a seasonally adjusted annualized rate because of the lack of cars/trucks and which is not much more than what we saw in March 2020, class 8 truck orders fell 12% y/o/y in September, also because of a shortage of parts. Daimler Trucks CEO said this today on its business:

“We will certainly be delivering less than we could have sold, and that also applies to next year. It’s a fight over every chip.”

PACCAR, another big truck maker said yesterday that Q3 truck deliveries will total about 33k vehicles vs 40k in Q2. They repeated their belief that “Global demand for the new Kenworth, Peterbilt and DAF trucks is very strong.”

This reality of slower growth because of a lack of supply continues to be reflected in the Atlanta Fed’s GDPNow for Q3. Two months ago on August 5th their Q3 GDP estimate was 6.1%. This past Friday it stood at 2.3%…

To the debate on how long the current bout of inflation will last, here’s another anecdote. The UK Telegraph yesterday reported on comments from the head of the European airline Lufthansa after the head of Ryanair said something similar last month.

“Carsten Spohr, CEO of Lufthansa, said that the crisis will reset the cost of holidays and business trips…Mr. Spohr insisted that customers will be prepared to pay higher prices after being prevented from traveling for much of the last 18 months. His warning followed comments by Ryanair chief Michael O’Leary last month, who warned inflation, higher taxes and fewer flights would drive up fares.”

Interestingly, Mr. Spohr also cited a level of financial restraint coming because of the amount of debt the industry has taken on to get thru Covid. “Lufthansa in the end probably has a $10b bill of this whole Covid crisis. That’s how much has cost us. So similar numbers for our competitors. So we all will be forced to be more disciplined. When we look at the pricing going forward, I agree with my friend Michael from Ryanair.” 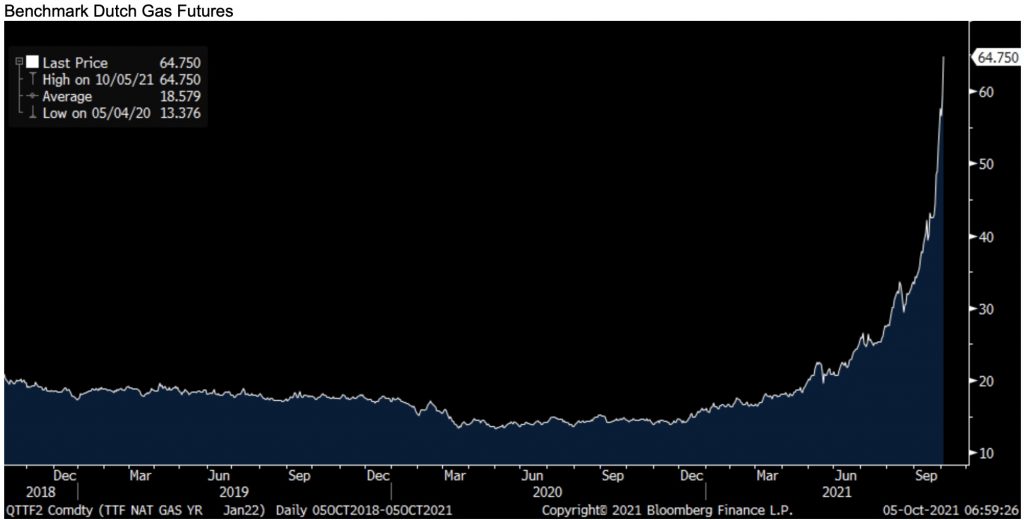 Germany’s decision after Fukushima to get rid of its nuclear plants was a disastrous mistake. I remain bullish on uranium stocks as the world realizes the importance of the stability and cleanliness of nuclear baseload power.

Damage Will Be Epic
ECB Governing Council Robert Holzmann has turned his forecast months ago of ‘inflation is transitory’ to now just fingers crossed that it is. “Definitely for the time being we cling to the hope that the current inflation spike will be transitory. Nowadays we have to be a bit more careful, because it becomes clear that the supply restrictions and the created increases in the prices of a number of important inputs may remain for some time.” Putting aside the BoJ, there is no central bank that has dug as deep a hole of easing than the ECB and if this is not a temporary situation they are completely screwed with not just the massive QE that is going on but with a deposit rate of NEGATIVE .50%. The damage to the European bond market if they ever get out of zero will be epic.

Stagflation
In Europe, we saw a tiny revision to the European services PMI to 56.4 vs the 1st print of 56.3 which is down from 59 in August. Stagflation was the message as Markit said “The current economic situation in the Eurozone is an unwelcome mix of rising price pressures but slower growth. Both are linked to supply shortages, especially in manufacturing, which has seen a steeper fall in output growth than services.” There is confidence for the services sector looking ahead but less so, “Service providers remained strongly optimistic that activity levels would rise over the coming 12 months as global economies recover from the pandemic. However, the degree of positivity slid to a 6 month low.” As this number is just a revision, there wasn’t much of a response in sovereign yields and the euro but we are seeing a bounce back of 4 bps in the 5 yr 5 yr euro inflation swap to 1.83%, matching a multi year high…

Meanwhile In The UK
he UK September services PMI was revised up to 55.4 from the initial read of 54.6 and compares with 55 in August. It did peak this year though at 62.9 in May. Markit said “The supply chain crisis put a considerable brake on the recovery in the UK service sector during September. Survey respondents widely noted that shortages of staff, raw materials and transport had resulted in lost business opportunities. Consequently, new orders expanded at the slowest pace since the end of the winter lockdown, while backlogs of work accumulated as service providers struggled to find candidates to fill vacancies.” Unfortunately, we know this all too well at this point with the only question being how long it will last. The pound is up slightly as are gilt yields. Inflation breakevens are jumping again, today by 6.3 bps to 3.95%. The last time it was above 4% was July 2008 and it was there for just a few days. 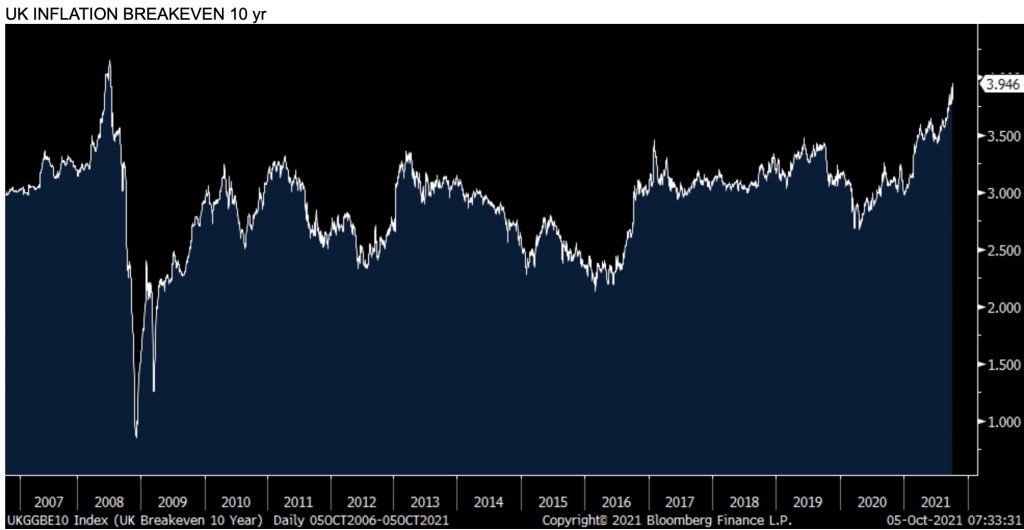 ***To listen to exactly what levels to watch in the gold and silver markets and much more in this important audio interview CLICK HERE OR ON THE IMAGE BELOW.

Why You Must Own Gold & Silver, Plus This Week’s Biggest Red Flag