Today the man who has become legendary for his predictions on QE and historic moves in currencies and metals discussed the shocking truth about Warren Buffett’s investment in gold and the real reason why he did it.

A Trip Down The Rabbit Hole Of CV And Buffett’s Investment In Gold
August 16 (King World News) – Egon von Greyerz:  Is CV the most perfect distraction that could have hit the world? The timing couldn’t have been more perfect for the European and American economies. We know that there were major problems in the financial system back in August-September 2019 when both the ECB and the Fed declared that they would do what it takes. And since then we have seen massive injections of liquidity in the form of QE and Repos.

The world was never informed of what the financial problems were but it is obvious that this was the hangover from the 2006-9 financial crisis, which was never solved but just deferred with the help of unlimited money printing and credit expansion. There was clearly something rotten in the kingdom of the financial world.

FRIGHTEN THE PEOPLE WITH HOBGOBLINS
So was it just coincidence that Coronavirus started spreading around the world in January-February this year? Throughout history, initiating a crisis has always been a popular remedy that leaders have applied to divert attention from the real problem whether it be political or financial. The normal course of action would be a military conflict. This would both enable massive money printing and also alarming the people which would result in more votes for the ruling government.

The American writer Henry Louis Mencken understood the purpose of these actions: 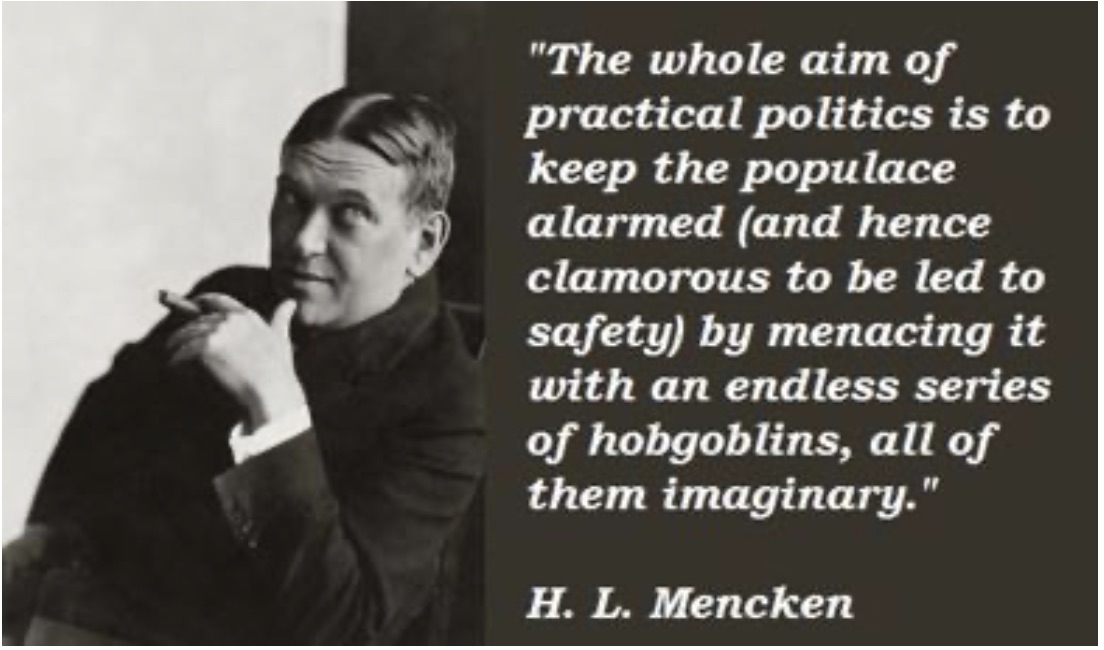 I am not someone who subscribes to conspiracy theories, but however the Coronavirus started, it has certainly diverted the attention away from the underlying problems in the financial system. And whether it is a hobgoblin or not, it has allowed some governments around the world to blame it all on CV and run huge deficits combined with massive liquidity injections.

CORONAVIRUS – OUTCOME WORSE WITH AUTOCRATIC LEADERS
If we look at the effects of CV on various countries, the differences are astounding. Sweden, which has had virtually no lockdown saw an 8.6% fall in GDP in Q2. Much of the fall was due to lower exports as other countries bought less Swedish products. Switzerland, which only has had a very limited lockdown had a 6.4% GDP fall in Q2.

If we then look at the two countries which have totally mismanaged the situation – USA and UK – the outcome is disastrous. US GDP fell 32.9% in Q2 and the UK GDP was down 20.4%. 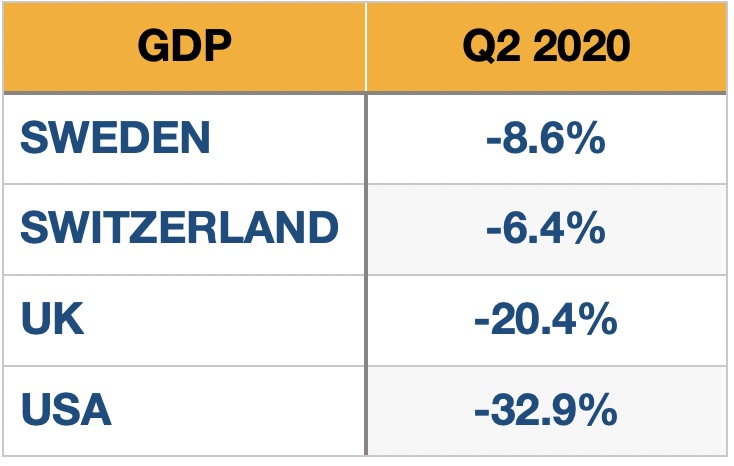 It is clear which countries have fared the worst. Sweden and Switzerland have delegated the CV policy to health officials whilst in the US and UK the much of the policy, or lack of, has come from the top.

Sadly the US and the UK have both had high numbers of CV cases and deaths. And in spite of major lockdowns, these two countries have seen a catastrophic decline in their  economies, a fall which will take many years to recover from.

BEST RUN COUNTRIES HAVE BEST CORONA RECORD
It is clearly no coincidence that Sweden and Switzerland have strong and well managed economies also whilst the US and the UK are running big deficits and debts. And with the poor economic state of the two latter countries, their economies will continue to suffer badly. Personally I don’t believe that there will be an effective vaccine for years or ever. Historically, any flu vaccine takes years to develop and is only effective in less than 30% of vaccinated people.

We are also seeing CV coming back in many countries that have lifted the lockdowns, for example Germany, Spain and France. Therefore it seems very likely that there will not be any major global recovery in 2021 either.

The biggest dilemma is that CV is not the real cause of the economic downturn but only the catalyst. As I explained above, the virus has allowed weak countries to print huge amounts of worthless money to prop up a financial system in an economy which was already on the verge of imploding before CV started. But fortunately for leaders such as Trump and Johnson they have been lucky to hide their ailing economies behind the CV curtain. So for them CV has been a very lucky excuse.

As the US, UK and many economies will be forced to continue or increase government handouts to suffering people and companies, all these countries’ will fall further into the quagmire of debt, deficits and economic decline…

THE END OF THE STOCK MARKET MIRACLE?
The biggest miracle currently is the stock market. After the February-March collapse, we have seen a rally that defies reality. This rally is a total disconnect with economic facts and only based on a combination of hope and printed money which is worthless. On January 30th this year I published an article called “INFLATE AND DIE – STOCK COLLAPSE AND GOLD SURGE IMMINENT”

The forecast which was based on our cycle system, was quite timely. The Dow crashed and gold went up just a few weeks later. The rallies we have seen since are not confirmed by any technical indicators and are likely to run out of steam very soon. I forecasted that the Dow monthly top would be in January and that is still the case. We have some indications that we could see big moves (down) in stocks in August and September.

But whether stocks soon start to reflect reality or it takes a bit longer is irrelevant. Stocks are overvalued on any criteria and anyone who stays invested will have his greed severely punished.

BUFFETT BUYS GOLD STOCKS
Much has been made of Buffett’s entry into gold by buying Barrick stocks for $1/2 billion. Has also sold shares for $13 billion including many bank stocks. Relatively, this $0.5b into gold stocks is very small, but his was at the end of Q2 so it might have increased since. Nevertheless, the $0.5b is 0.07% of this total portfolio so hardly significant. More importantly, it is a major mental change since Buffet has always talked down gold. Buffet had an important position in silver in 1996 but managed to lose money on it even though silver went up at the time. His people managed to mess up a derivative hedge position against silver.

Buffett has been a master investor and ridden a wave for decades. It has confirmed what I wrote about a typical buy and hold investor like Alfred who successfully has only bought and never sold since 1945. Sadly, I believe that both Warren and Alfred are going to lose most of their stock market money, in real terms (gold), in the next few years.

Buffett has $150b in cash which is 20% of total assets. If he spent that on physical gold and gold stocks he would crash protect his portfolio. Just in gold it would mean 2,400 tonnes, which is 80% of annual mine production so it would clearly take time to accumulate and move the price.

GOLD IS SHAKING OUT WEAK HANDS
Gold moved from a price of $1,450 in March to a high of $2,075 on the Aug 6, a 43% move. For the first time in a long time the media started to talk about gold and also many people who normally never look at the gold price. This is often a sign of a short term top and that was clearly the case. From the high on Friday the 7th of August, gold lost $200 in three days. It has since recovered and is at $1,945, above the 2011 high.

This kind of fall is exactly what a short term overbought market needs. It gets rid of the weak hands and speculators. It is possible that the correction lasts a bit longer, especially if stocks fall.

CENTRAL BANKS UNDERWRITE GOLD
Absolutely nothing has changed in the long term bull market of gold that in this phase started in 1999. What guarantees this secular bull market in gold is central banks’ continued and accelerated destruction of paper money. Nothing can be more certain than that. So gold between $1,900 and $2,000 is still an absolute bargain.

Why Did Warren Buffett Buy Into Gold?
Because Gold Is Still A Bargain And He Knows It 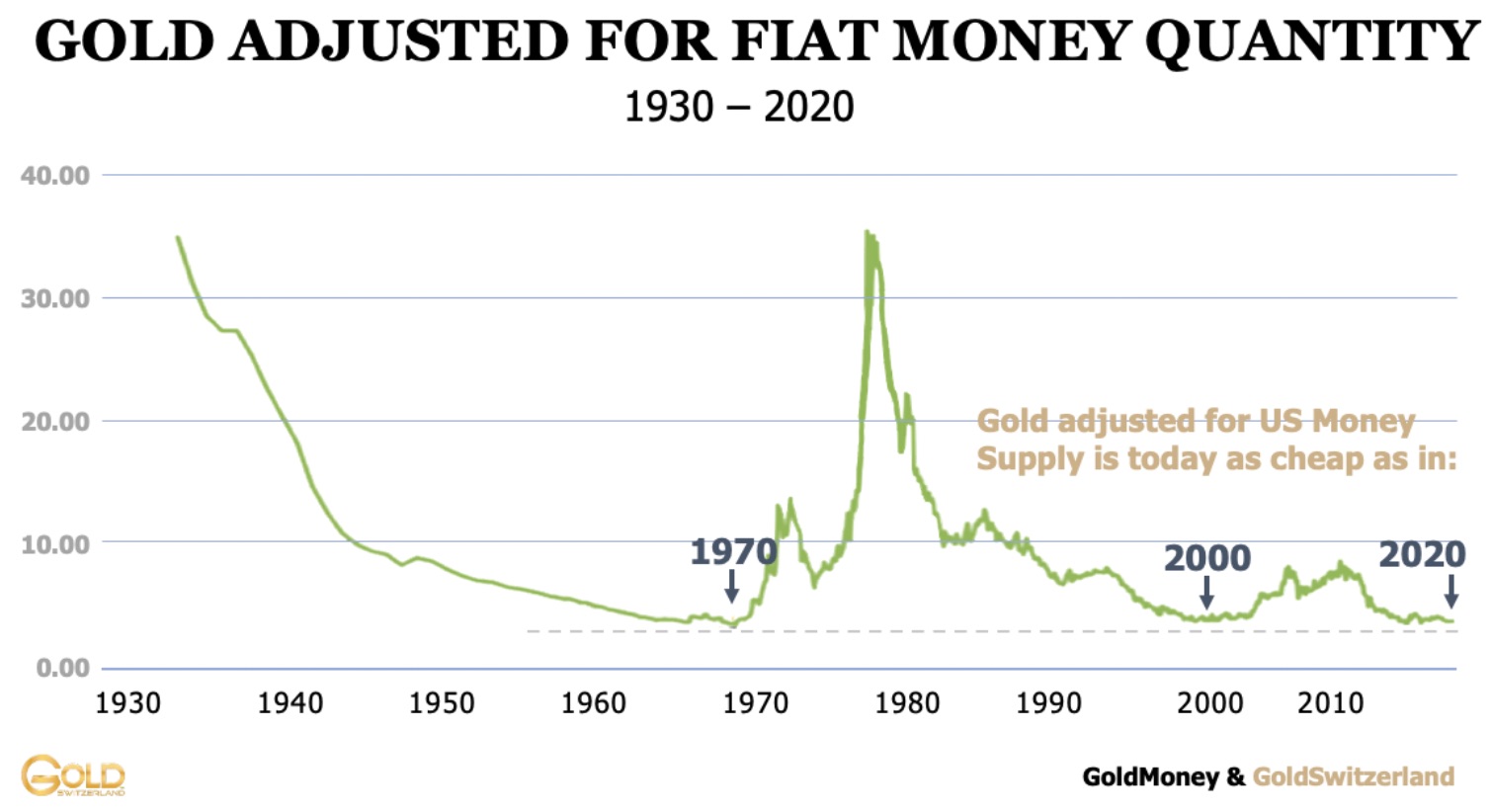 So measured in fiat money, gold is likely to move up by multiples from here. But it is obviously meaningless to measure gold in a unit like dollars, which will become worthless. So if the dollar becomes worthless, gold will go to infinity, which is immeasurable too. Just think about gold in grammes or ounces as the best insurance and wealth preservation asset that you can acquire today. It is a bargain at current levels and will protect investors from the destruction of currencies and the financial system…For those who would like to read more of Egon von Greyerz’s fantastic articles CLICK HERE.