While the world is focused on trade wars and potential war, there is a war going on in these key markets and this is how it will impact gold and silver.

Major War Taking Place In Key Markets!
April 23 (King World News) – As you can see from the chart below, their are massive, near all-time record commercials short positions in the crude oil market! 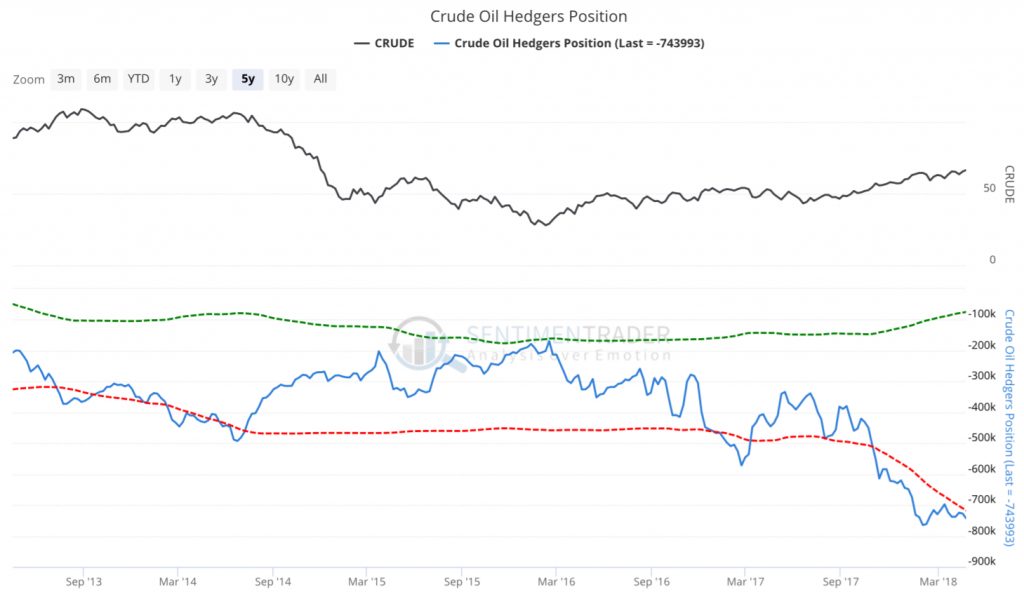 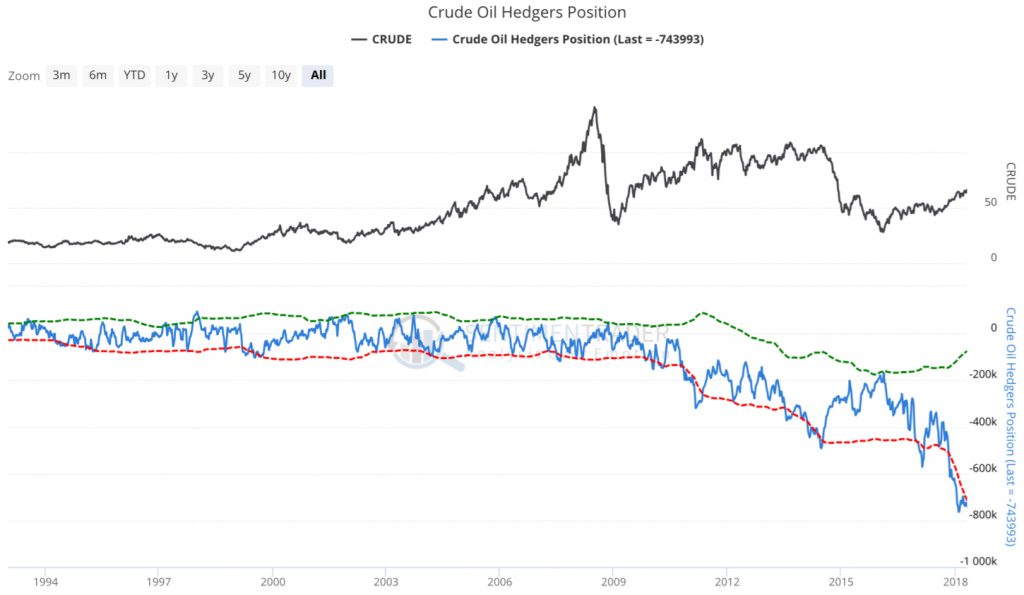 “EXTREME PESSIMISM” WARNING: It looks like almost everyone believes US 10-Year Treasuries, which are so important to the housing market, are about to plunge, sending mortgage rates even higher (see chart below). 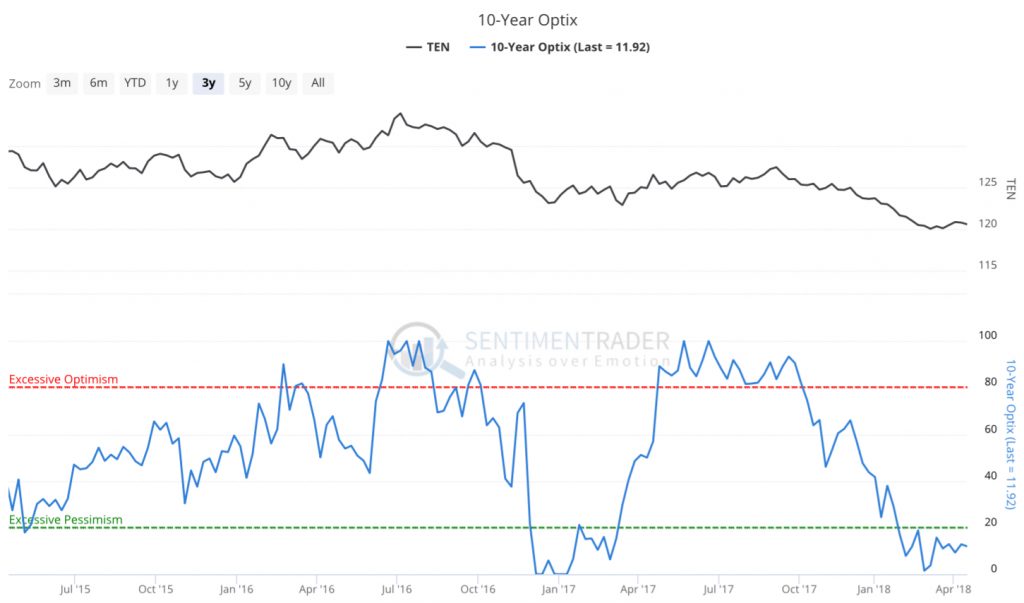 Taking The Other Side Of That Bet…

While speculators are betting big against US 10-Year Treasuries, commercial traders have taken the other side of that bet and now have near all-time record long positions in 10-Year Treasuries (see chart below).

Commercials Near All-Time Record Long Positions In US 10-Year Treasuries! 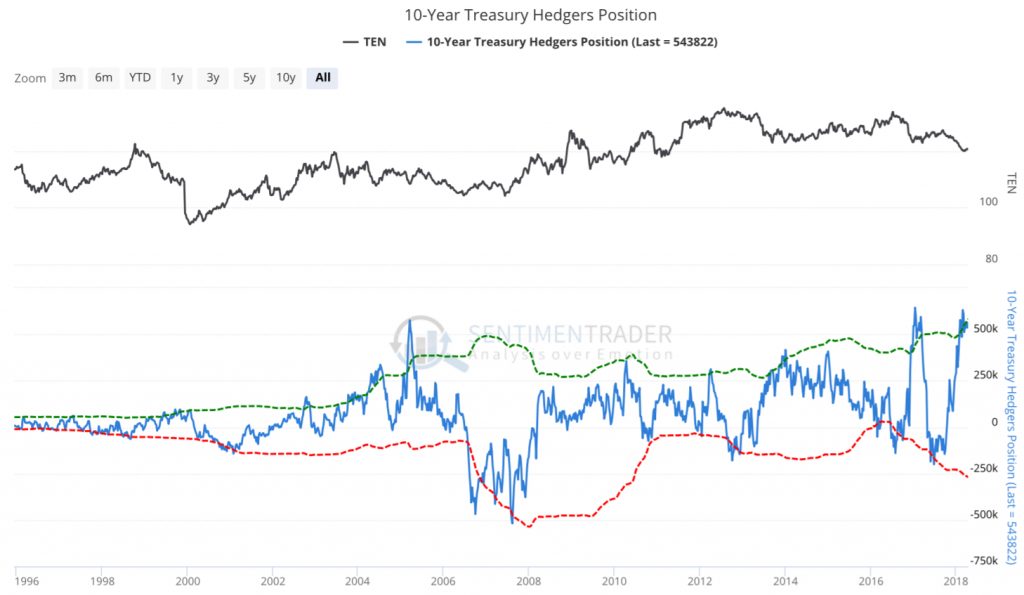 The last time commercials were this heavily long US 10-Year Treasuries, it only briefly halted the selling onslaught, before the market overwhelmed the commercials, sending interest rates higher.  It will be very interesting to see how Treasuries trade this time around, especially now that they are threatening a historic breakout that would spell big trouble for global stock markets.

Regarding the price surge in oil, this has been feeding into already increasing inflationary pressures. This has created a serious bid in the gold market as well as other commodities. In fact, the big money is betting that commodities have already bottomed and are now beginning the next leg higher in this multi-decade inflationary cycle.

What Does This Mean For Gold & Silver?
Despite the recent pullback in commodities and rally in the US dollar, the central banks of the world are now in serious retreat in a number of major markets. Meaning, the boys and girls in the massive Federal Reserve trading room are extremely busy, trying to prevent trouble that could escalate into serious market dislocations.

Fortunately for them, they have the unlimited backing of the US government. The bad news is that all markets are bigger than any central bank(s) or government(s). This means that counter-trend trading in gold, silver and stock markets is all smoke and mirrors, designed to fool weak hands. That’s all they have left because QT is going to be very painful for holders of paper financial assets and bullish for hard assets.

Big News!
MAPLE GOLD DEFINES NEW GOLD ZONE – Maple Gold Mines Ltd. (symbol MGM in Canada and MGLMF in the US) is providing an update on the continuing winter drilling campaign. The program has ramped up with eight diamond core drill rigs now actively testing all target areas (resource area, NE Syenite and NW Syenite targets). One of the company’s high-priority targets is the area between the Porphyry, Douay West and NW zones, now referred to as the Nika zone, which has a lower drill hole density and strong potential for new discoveries and extensions of existing resource zones. The company has received results from four drill holes in this area, with highlights below:

“One of our objectives with the current drilling campaign is to take steps toward connecting the existing resource zones and extending known mineralization beyond the current limits of the block model that was used in the 2018 Micon estimate.

The initial results in this Gap area are indicative of the discovery of a new gold zone there, and one we believe has strong potential to make a positive impact on future resource estimations at Douay. We look forward to results from the additional five drill holes with assays still pending from this priority target area, and we are confident that similar new zones will be defined elsewhere within the resource area.”

In addition to the assays still pending from drill holes DO-18-217 and DO-18-218, Maple Gold has completed a further five drill holes in this area for which assays are pending, and that have the potential to continue expanding the Nika zone.

* All lengths above are core lengths and not true
widths. True widths are estimated to be
approximately 90 per cent of core lengths. Uncut
assay values used for intervals given.

A total of 47 drill holes have now been completed or are continuing property-wide, of an originally planned total of approximately 65 holes. The company has only received assay results for 10 complete drill holes to date and will continue to provide updates as sufficient assay results are received for each target area. More than 8,600 samples have now been submitted to ALS Laboratories and with drilling expected to continue into early May, the company anticipates drill results throughout April, May and June, 2018.

About Maple Gold Mines Ltd.
Maple Gold is a well-financed gold exploration company focused on advancing a district-scale gold project in one of the world’s premier mining jurisdictions. The company’s 370-square-kilometre Douay gold project is located along the Casa Berardi deformation zone within the prolific Abitibi greenstone belt in Northern Quebec, Canada.