On the heels of volatile trading action in markets around the world, the Godfather of newsletter writers, 90-year old Richard Russell, believes the long awaited gold base has completed and his subscribers can expect to see some historic trading in key markets.  Below Russell covers everything from God to major markets as only he can.

Russell:  “With central banks around the world trying to devalue their currencies, the US dollar stands as the cleanest shirt in the closet of dirty laundry. Some of the new reports emerging about the US economy are less than bullish. This has holders of US dollars thinking about a currency that might be stronger than the dollar. Thus, one hears words like “get out of dollars, get into gold,” and after years of bad-mouthing gold, the yellow metal is coming into acceptance again.

Below, an up to date P&F chart of gold. At 1210 we have a bull signal with an upside target projection at 1340. Subscribers who don’t own any physical gold should now move to make their first purchase. I’ll now stick my neck out and claim that the long awaited gold base is completed. 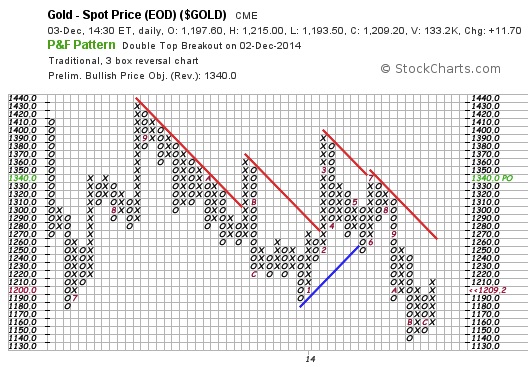 Gold is holding above 1200 as I write. High volatility in gold has caused traders of paper gold to pull their hair out. Those of us who have held physical gold have had little to worry about.

Now let’s return to the present. I believe a great speculative third phase lies ahead for this bull market. The coming third phase will see the stock market climb far higher than even the bulls think possible.

This piece may sound like a reversal of thinking on my part. But it is based on a weekend of deep thinking and memories of 1957. As for timing, I believe the coming third phase could last until 2016. It will have the effect of placing the United States as the continuing world leader. During the coming third phase, I expect new discoveries and inventions to excite mankind. Two stocks that I own in anticipation of the coming wildly speculative third phase are WR Berkley and Berkshire Hathaway. I continue to like physical gold and silver.

I often ask myself whether I am doing any good in my stay on this good earth. If I have served to guide some of my subscribers toward the spiritual path, I will consider that my visit to the earth on this round will have been worth it. In closing, I’ll say that the most precious commodity on this earth, the most precious commodity that anyone can have, is peace of mind. The antithesis of peace of mind is fear. Fear is the curse of mankind. Man’s greatest task on earth is to equalize or get rid of fear. The path to getting rid of fear is learning to love yourself.

Words from Emmet Fox’s Sermon on the Mount:

The old saying, “God has a plan for every man, and he has one for you,” is quite correct. God has glorious and wonderful plans for every one of us. He has planned a splendid career, full of interest, life and joy, for each, and if our lives are dull, or restricted, or squalid, that is not his fault, but ours.

Michael Oliver – As Stocks Plunge This Will Surprise The World