With many global stock markets near record highs and the crude oil market struggling, many people are wondering if the rest of 2015 is set up for another big year or if there are reasons to worry?

To help answer those questions, here is the latest Investors Intelligence report along with the all-important sentiment chart:  "Stocks ended sharply higher last week even after losing some ground late Friday. Monday showed further consolidation with index and indicators all holding bullish. The broad averages returned to the upper end of the trading range shown since Nov-14. Indicator charts have not yet returned to their own prior top levels to confirm the index strength.

Advisors certainly noted the market strength last week with new optimism but overall they also continue to show only modest shifts, not yet returning to the troubling optimism that marked the mid-Nov and late Dec index highs. That would suggest increased danger.

After a new bounce in their number the bulls ended at 52.5%. That was up from 49.0% a week ago and close to the two weeks ago level. The count exceeded 56% at prior highs over the last three months and may be heading there again. Bulls above 50% show elevated risk while +60% levels point to near fully invested outlooks that usually precede a major market top. That has not occurred since June 2014. By Oct 2014 the bulls were down to 35.3% and buying conditions were good after a near 10% market pullback.

This week had fewer bears at 15.2%. The prior two weeks had them at 16.3% and just before that saw a modest six-month high. While troubles mount around the world US stocks remain an island of relative safety. The bears have been unable to gain any traction for more than a year with a reading below 20% since Apr-14.

There was also a drop for the editors projecting at correction outlook, to 32.3%, from 34.7% last issue. This count also holds in a fairly narrow range since Nov. It rises with the market and contracts when indexes retreat. That shows a group of advisors without a strong commitment to the bullish trend. They are still worried and not reluctant to change.

The spread between the bulls and bears expanded to 37.3%. That is above the previous two readings of 32.7% and 36.8%. It is a high since December ended with a 41.5% difference. That was near the 42.7% peak from mid-November. The 40% level should occur again before the next market top. Low levels had not occurred since mid-Oct when the spread of 17.1% was favorable for general accumulation in the current environment. Differences over 30% are a worry and above 40% signal major caution. The mid-Oct spread was a low since Sep-2013 when it was expanding from the reading of 13.4% that Aug. Bears haven't outnumbered bulls (a negative spread) since October 2011. 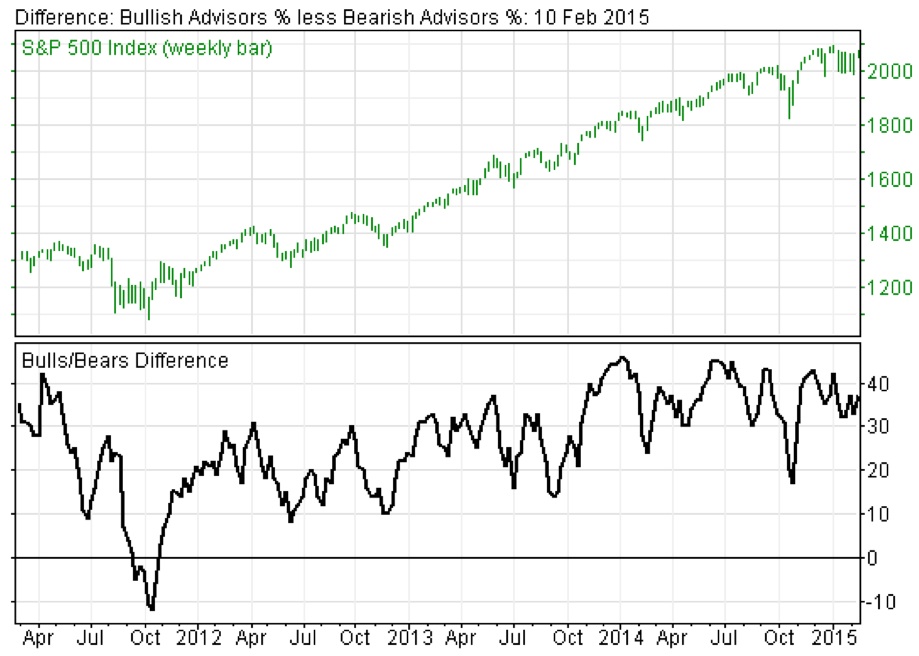 ALERT: Uranium About To Launch Into A Massive Bull Market

Former Soros Associate Says The ‘Fix’ Is In