Here is a very important look at what to expect next for gold and crude oil, plus a dramatic week for key markets.

Gold, Oil, And A Dramatic Week
September 22 (King World News) – Ole Hansen, Head of Commodity Strategy at SaxoBank:  “A dramatic week in crude oil saw the Brent futures contract jump the most on record before deflating on continued growth and demand concerns. Gold traded higher but within the tightest range in two months, despite heightened geo-political risks, the second US rate cut in this cycle and a softer dollar. Low level trade talks between US and China received attention, with the market quietly hoping for a breakthrough when senior-level negotiations continue in earnest next month.

The year-long trade war was mentioned by the OECD as its main reason for once again lowering the outlook for global growth in 2019 and 2020. It said that global growth momentum had tumbled toward lows last seen during the financial crisis, with protectionist policies taking an increased toll on confidence and investments. Industrial metals traded down but off their lows after China, the world’s biggest metal consumer, lowered borrowing costs in a bid to ease liquidity concerns.

Despite the warning from OECD, the Bloomberg Commodity Index – which tracks a basket of major commodities in energy, metals and agriculture – traded higher for the first time in four weeks. This as geopolitical concerns lifted crude oil and gold thereby offsetting the mentioned losses among industrial metals and some agricultural futures. Cocoa continued its September rally on indications of lower supply from the Ivory Coast and Ghana. The outbreak of the deadly swollen-shoot disease in Ghana has cut its production and the market worry is that it may spread to the Ivory Coast. 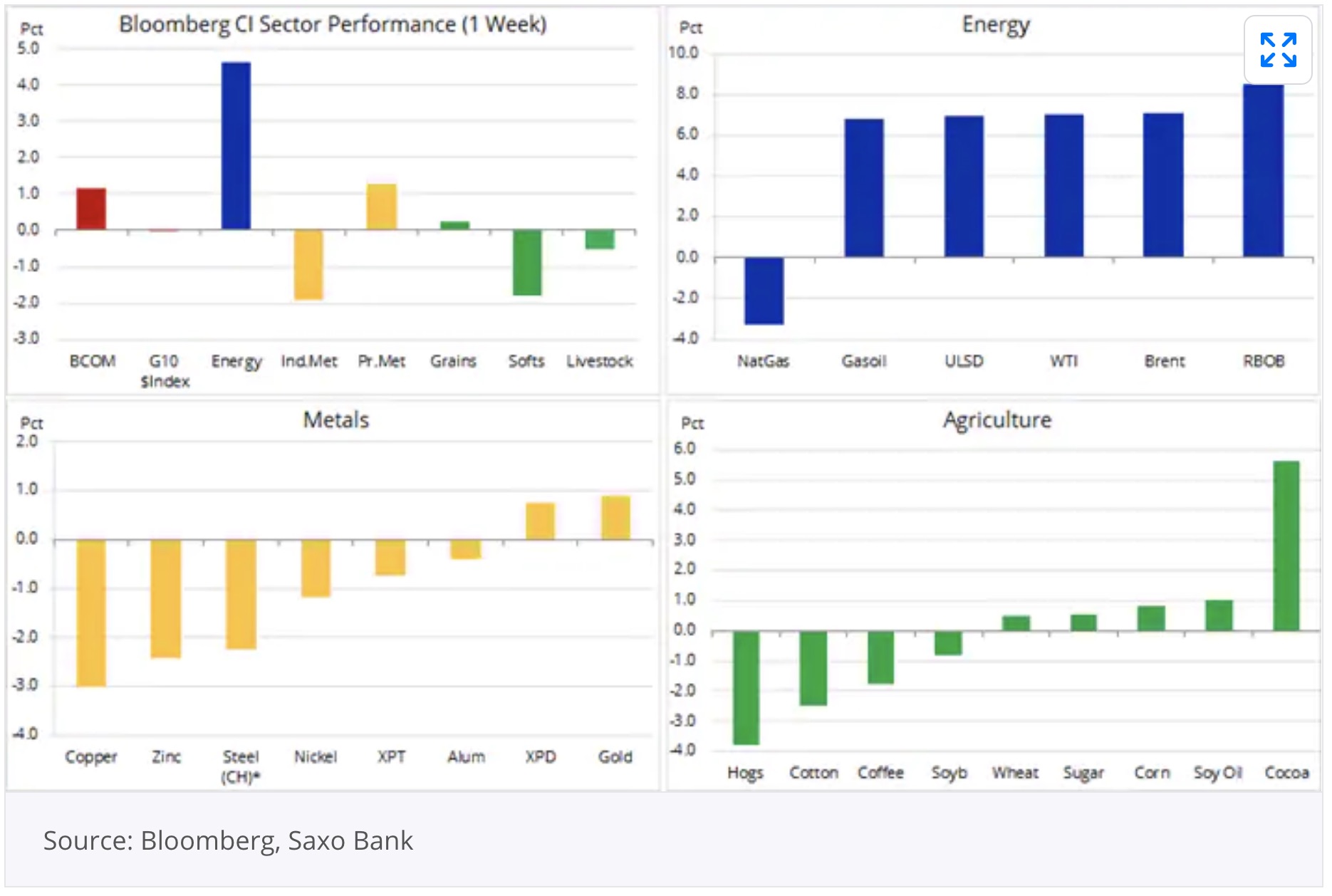 While probably only temporary, the crude oil pendulum swung dramatically back in favor of higher prices this week when attacks on the world’s biggest oil processing plant in Khurais and Abqaiq in Saudi Arabia temporarily knocked out 5% of world supply. For a couple of days, the uncertainty resulted in major price swings before Saudi officials calmed the markets after saying that supplies would be restored sooner than the market had feared.

Following a week where oil market reports warned about the risk of emerging supply gluts due to weak demand growth the spike was painful but could have been a lot worse considering the amount of oil being impacted.

Rising oil prices alongside an economic slowdown leading to lower demand growth is not a good combination. This is probably the main reason why the crude oil rally deflated so quickly. The risk to supply from a geo-political escalation and Saudi Arabia’s apparent weakness when it comes to protecting its assets should keep the prices supported during the coming weeks. The risk of a supply shortfall has been ruled out with Saudi Arabia tapping into its domestic stockpile stocks of 180 million barrels (Source: JODI) to meet any production short fall.

However, the geo-political risk premium, judged to be anything above $60/b on Brent, is likely to take longer to disappear. Iran, which has been accused of being behind the attacks, may increasingly find itself trapped in a corner with the pressure of rising sanctions making it increasingly impossible to sell its oil.

On that basis we suspect that Brent crude oil’s range around $60/b seen these past three months now has shifted higher towards $65/b. 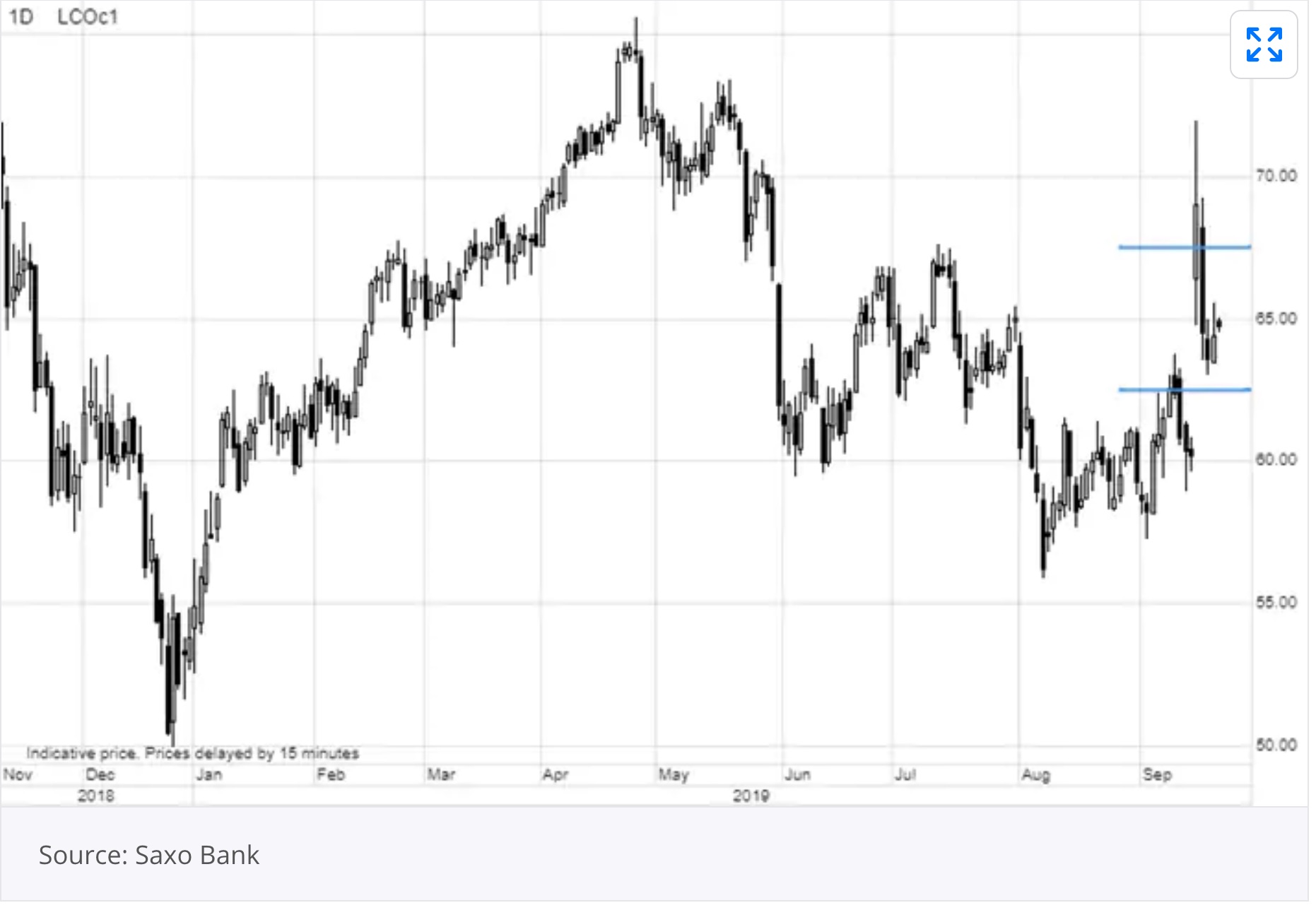 Gold
Gold managed to stay within the tightest trading range in eight weeks. While the Saudi Aramco attack triggered a strong opening to the week, it was the aftermath of the US rate cut that created a 28-dollar high to low move. Traders bought the rate cut announcement only to quickly dump their positions when it became apparent that this was a hawkish rate cut given the reluctancy by members of the FOMC so commit to a succession of rate cuts.

Overall the key takeaway from the week is that the $1485/oz support level remains firm and that the upside is currently capped just above $1510/oz. Having been in a correction mode now for the past month it still feels like investors are more concerned above missing a potential upside price extension than a further correction of a few percentage points.

While the FOMC was reluctant to commit to renewed quantitative easing, we feel it’s not a question of if but when Fed Chair Powell is forced to deliver a substantial policy easing. The short-term lending mechanism has come under some considerable pressure this past week with the Federal Reserve forced to intervene with liquidity injections for the first time in a decade.

Gold’s June to August rally was driven by the collapse in global bond yields. Since then, the 10-year yield has bounced from a low of 1.43% to the current 1.78%. While that support has faded, we are now seeing geo-political risks on the rise while the dollar is showing signs of potentially topping out.

We maintain a positive outlook for gold in the belief that the low point in global economic growth remains in front, not behind us. The US Federal Reserve is likely to continue to cut rates, while the US-China trade war is raising recessionary risks. Nominal and real bond yields are expected to stay low and, in some places, negative thereby removing the opportunity cost associated with holding a non-coupon and non-interest paying asset.

Continued buying by central banks may also be expected with central banks looking to diversify and for some to reduce the dependency on the dollar, so called de-dollarization. And finally, as mentioned, the dollar is potentially on its final legs with the emerging risk of US action to weaken the Greenback.

However, in the short-term speculation that a U.S.-China trade deal can be reached next month may keep the upside capped while keeping the risk of a deeper correction open. A break below the mentioned $1485/oz support level could trigger a deeper correction towards $1450/oz. 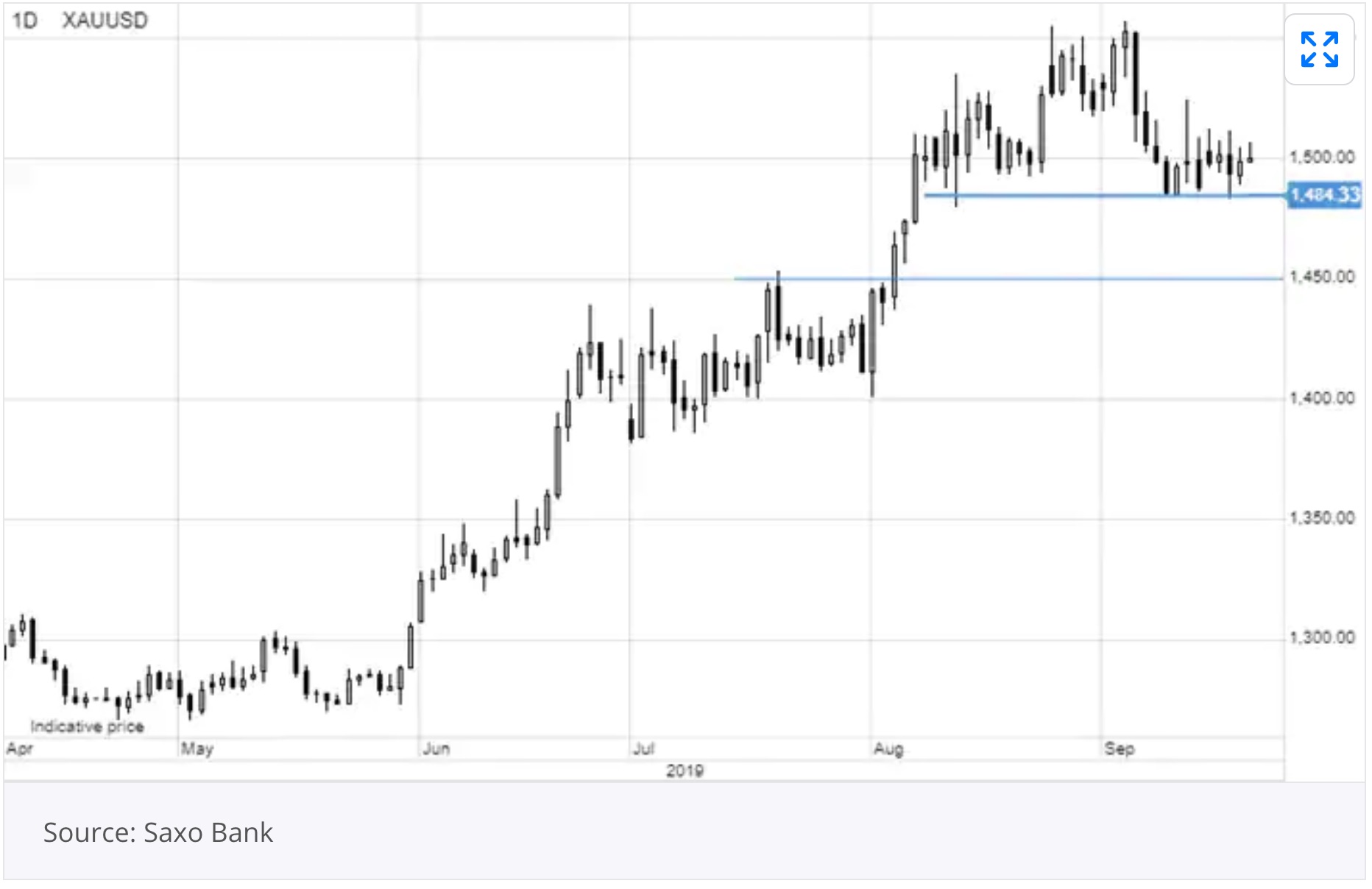 Don’t Miss This!
KWN has now released an extremely powerful audio interview with Alasdair Macleod where he discusses how the global chaos will accelerate and why a worldwide depression may loom as well as what people need to do in order to protect themselves from the coming turmoil, which he believes will devastate most investors.  You can listen to it by CLICKING HERE OR ON THE IMAGE BELOW.

“No Matter What They Call It, QE Is Back,” Plus A Look At Gold & Oil CLICK HERE TO READ

Lowest Level In 8 Years, What’s Wrong With This Picture? Keeping The Bubbles Alive, The FedEx Signal, Plus A Look At Gold CLICK HERE TO READ

Fed Prepared To Go Medieval With Rate Cuts And QE, Plus Here Is When It’s Ok For Bears To Fight The Fed CLICK HERE TO READ