The public is lining up to pull money out of homes at near record levels, but that is not the only surprise.

October 19 (King World News) – Danielle DiMartino Booth, Quill Intelligence:  In increasing numbers, firms are buying revenues. At a conference Friday, Goldman Sachs President John Waldron cited ultra-low interest rates as a driver of Mergers & Acquisitions (M&A) for big companies outside hard hit industries. “And the market is giving them the license to do M&A, encouraging more consolidation,” he added. There’s no doubt about the “licensing” with the equity prices of solid players a hard and powerful corporate currency.

That said, Waldron warned that the M&A wave was not cost-free:

“Politicians are going to be faced with the uncomfortable reality that you’re going to have more big business doing better and that there’s going to be more losses of jobs along the way,” as smaller firms get swallowed up by their bigger peers which, “will be complicated societally.”

“Complicated societally” is quite the diplomatic characterization considering droves of Americans still cannot pay for the roof over their heads. On Friday, the Mortgage Bankers Association (MBA) announced that 8.5% of renters (2.82 million households) missed, delayed or made a reduced payment while 7.1% (3.37 million homeowners) missed their mortgage payment. No doubt, this is an improvement from June when 11% of renters and 8% of homeowners couldn’t cover their housing expenses.

More notably, the MBA found owners’ lost rental revenue had increased to $9.2 billion in the third quarter from $9.1 billion in the three months ended June. Total missed mortgage payments rose to $19.4 billion from the second quarter’s $16.3 billion. Rising layoffs on the income scale are apparent in these data as bigger payments are skipped…

For the 93% of mortgage holders making good on their payments, homeownership has never been so lucrative. According to AEI’s Housing Center, through June, refinancing activity rose 674% over the prior 12 months while that of cash-out refinancings had risen 189%. Moreover, the prevalence of automated appraisal waivers (“With home prices up 12% over the past year, we’ll let computerized comparables do the work rather than appraisers!”) has risen 110% for non-cash-out refinancing and 200% for cash-outs. Through August, Fannie Mae and Freddie Mac — which collectively account for 90% and 80% of non-cash-out and cash-out refinancing activity, respectively – used these automated appraisal waivers for two-thirds of non-cash-outs and 30% of cash-outs. 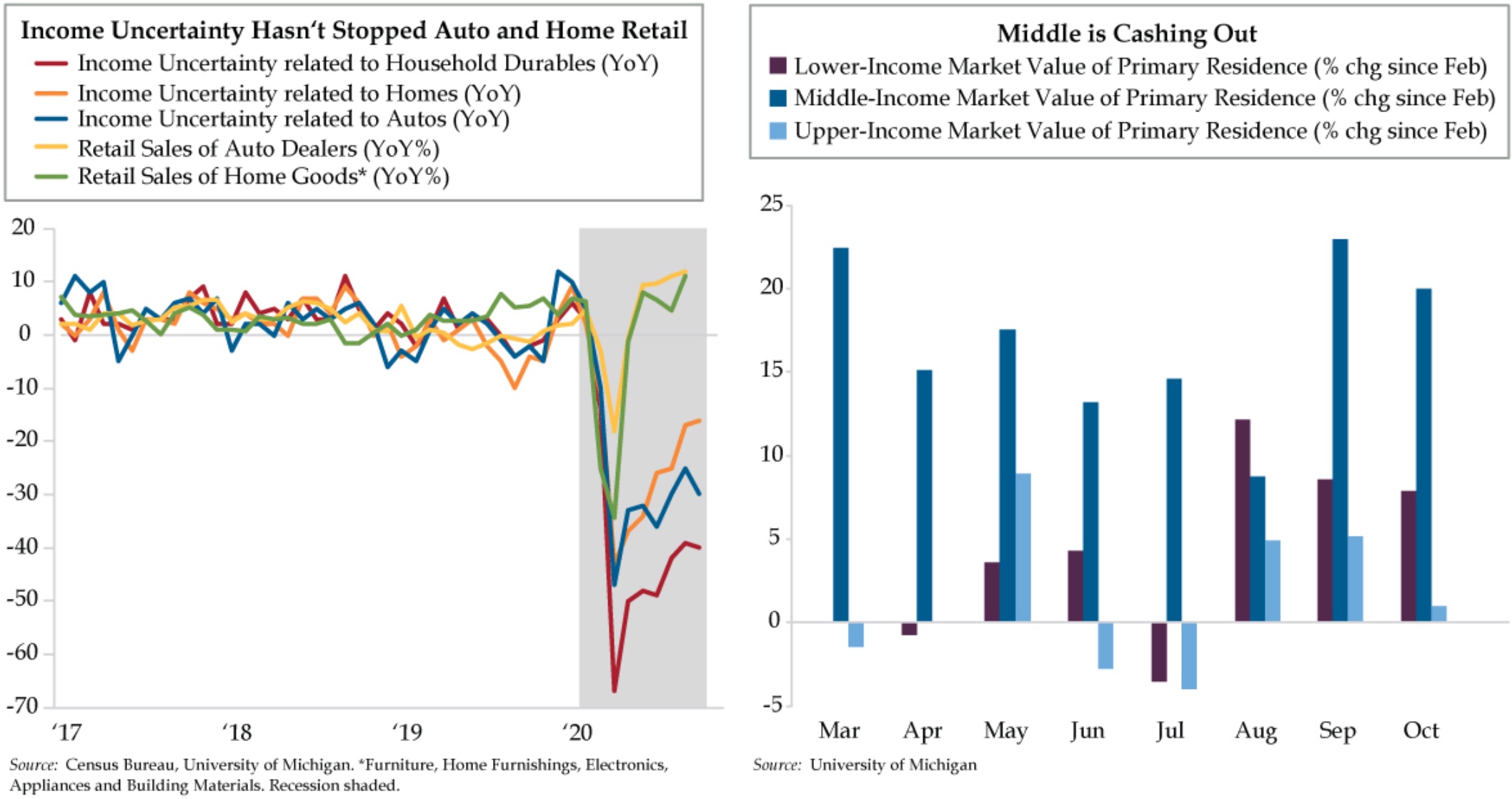 In the borderline reckless department, 11% of purchases backed by these government sponsored enterprises substituted models for appraisers. The upshot according to CoreLogic:

For the moment, homeowners in the middle of the income stack are making hay. According to the University of Michigan in its preliminary October read of consumer sentiment, Middle-Income earners reported that their homes’ market value had risen by 20% since February (dark blue bars, right chart). That blows past lower and upper-income earners’ assessments (purple and light blue bars). Not pictured, middle earners also reported buying conditions for durable goods at appreciably higher levels than the upper and lower rungs on the income ladder.

At least we know with some confidence who’s been on the receiving end of cash-out refinancings that have accelerated to a decade-high quarterly run rate of $50 billion. That’s quite the tax cut if you think about it. Even for those not monetizing their equity, lower payments free up space in household budgets. Runaway home prices help square the circle of the resilience of sales of Autos (yellow line) and an aggregate of Appliances, Building Materials, Electronics and Furniture & Home Furnishings (green line) in Friday’s retail sales data.

The Wall Street Journal highlighted another key driver: In August, three out of four of the nation’s largest 100 school districts started instruction remotely. This seasonal quirk produced an 11% month-on-month spike in Apparel and a 9.7% surge in Department Store sales. The former is still down 12.5% year-over-year while sales of the latter remain off by 8.2%.

It’s with good reason that economists say one month does not make a trend. As seen in today’s left-hand chart, middle-income homeowner excitement notwithstanding, income uncertainty across the aggregate of workers continues to present downside risk to Autos, Homes and Household Durables (blue, orange and red lines) sales. It’s likely the highest and lowest earners are aware, albeit via differing prisms, that every pandemic-accelerated corporate move also entails quiet layoffs as part of restructuring.