As the wild trading continues, Stephanie Pomboy, warns of “hysterical blindness in markets,” Art Cashin warns market have a whole set of new fears to digest, plus a look at gold’s rally, pullback and what to expect next. 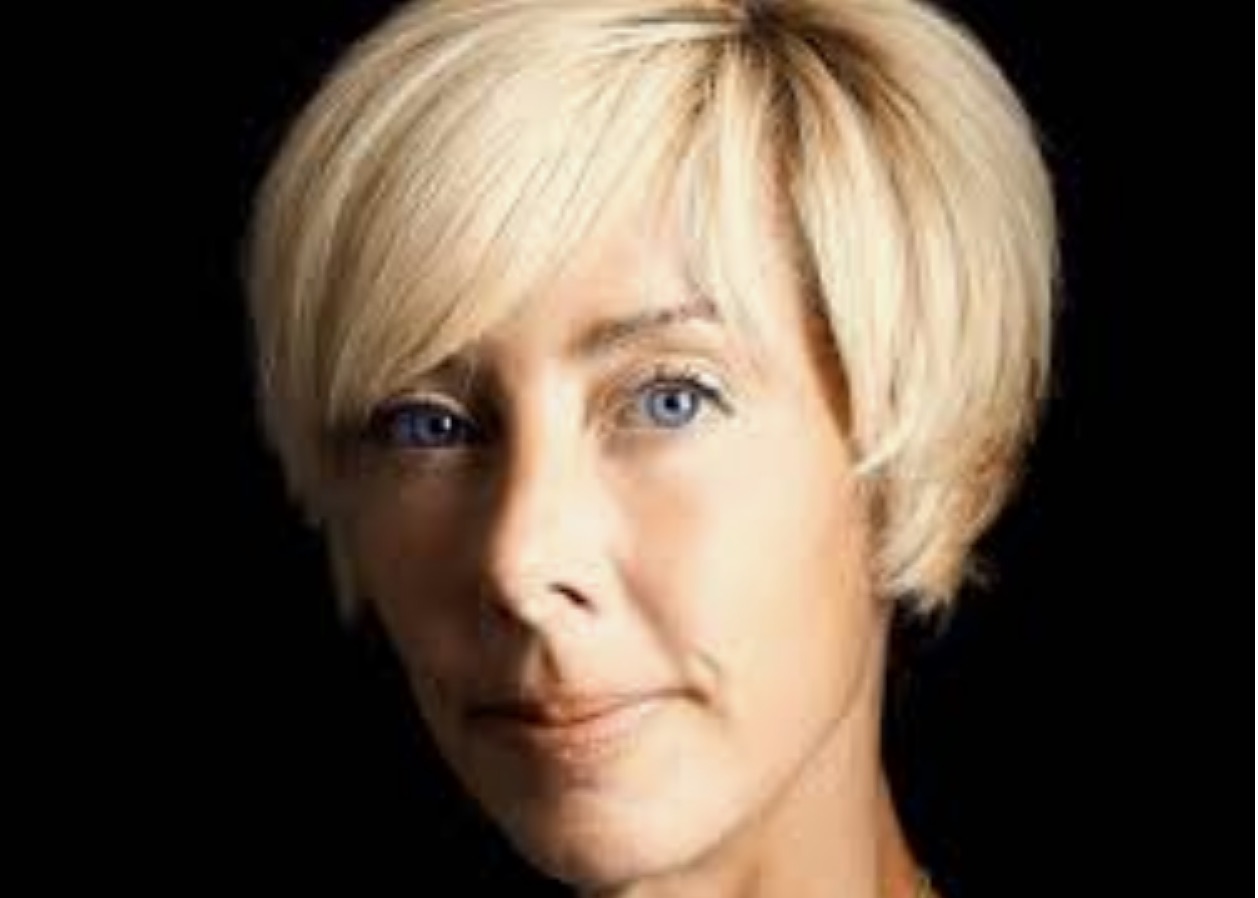 Pomboy Warns Of Hysterical Blindness
August 13 (King World News) – Stephanie Pomboy at MacroMavens:  “It’s fascinating to read all the frothing-at-the-mouth commentary about how insane and unsustainable negative government bond yields are, even as global central banks commit to buying more and more of them. Meanwhile…the same folks clamor into mortgage backed securities, munis and corporates whose yields are TIED to the government debt bubble–but lack the support of a dedicated buyer that has INFINITE resources. In psychology, I think this phenomenon is called: hysterical blindness.”

Buy The Dip In Gold
Peter Schiff:  “Once again traders are selling gold based on a bigger than expected increase in July consumer prices. This is a mistake, as the Fed will not fight higher inflation, but allow it to get worse. The Fed will not even attempt to put the inflation genie back in the bottle. Buy gold!”…

Cashin – A Whole Set Of New Fears To Digest
From legend Art Cashin:  Another Pair Of Eyes – In his overnight note, my friend Mark Newtown, the technical guru of Newton Advisors went over the technicals in the action of the last two weeks. Here’s a bit of what Mark wrote:

Yesterday’s weakness broke the trend from early last week and last Friday’s lows in the process, erasing about 1/3 of last week’s bounce. Breadth and volume expanded and volume flowed into Declining vs Advancing issues as a percentage of overall A/D at the highest levels since 5/1. While prices arguably are near the first important level at 2880, which represents a Fibonacci 38.2% of the prior rally, sufficient damage looks to have occurred in both Financials and in Technology to argue for additional weakness. Bounces up to last Friday’s 2899 lows should represent a chance to sell into this for a pullback down to 2858 and below that to 2839. Under this level it would be likely that markets experience a complete roundtrip of last week’s bounce.

Importantly, stocks look to be following bond yields again, and yesterday’s plunge in TNX to 1.645%, or nearly a 10 bp drop, coincided with a >1% decline in Equities, with Financials leading to the downside. What might not have been commented on as much concerned the extreme flattening in the 2/10s yield curve which now lies less than 6 bp from inverting below 0. The US 30-year yield dropped to new lows for the year and lies just 4 bps above historic lows established back in 2016 at 2.0936, three years ago.

Emerging markets dropped an equivalent amount as SPX, as gauged by EEM, but most eyes were on the currency markets, as the Argentinian Peso fell by greater than 15%, as Mauricio Macri’s rout in the election was seen as a possible preview of October elections. To say Argentina will default might be premature, but the bond and currency markets look to be starting to price this in. Furthermore, technical charts of Brazil’s Real and Colombia’s Peso also look extraordinarily weak, and it’s difficult to say these other currencies won’t be affected.

At present, given the combination of fears of the rapidly escalating Hong Kong Extradition standoff along with the Argentinian currency plunge, markets have a whole set of new fears to digest. Fear is not quite widespread, yet any further pullback to test June lows likely would represent the maximum amount of weakness for August given a likely escalation in bearish sentiment. For now, momentum and breadth have been weakening, and now last week’s bounce looks to be fading a bit quicker than expected. Use movement under 2880 as a stop for any longs, expecting market pullbacks to test last week’s 2822 and possibly break these lows.

Under 2880 would confirm a probable retest is underway, while movement back over 2900 would likely postpone any turn back down until Thursday/Friday.

Consensus – President Xi is thought to be under heavy pressure to return stabilization to Hong Kong but to avoid the PR disaster of another Tiananmen Square. Can he have the patience to wait for school to resume in September and deplete the number of protesters?

Keep your eye on the thirty year yield, which is within inches of an all-time low.

Gold’s Rally
Ole Hansen, Head of Commodity Strategy at SaxoBank:  “Gold’s rally to a six-year high remains mostly a bond story and for investors it is critical to keep an eye on the events that drive yields in order to determine what happens next. (See below). 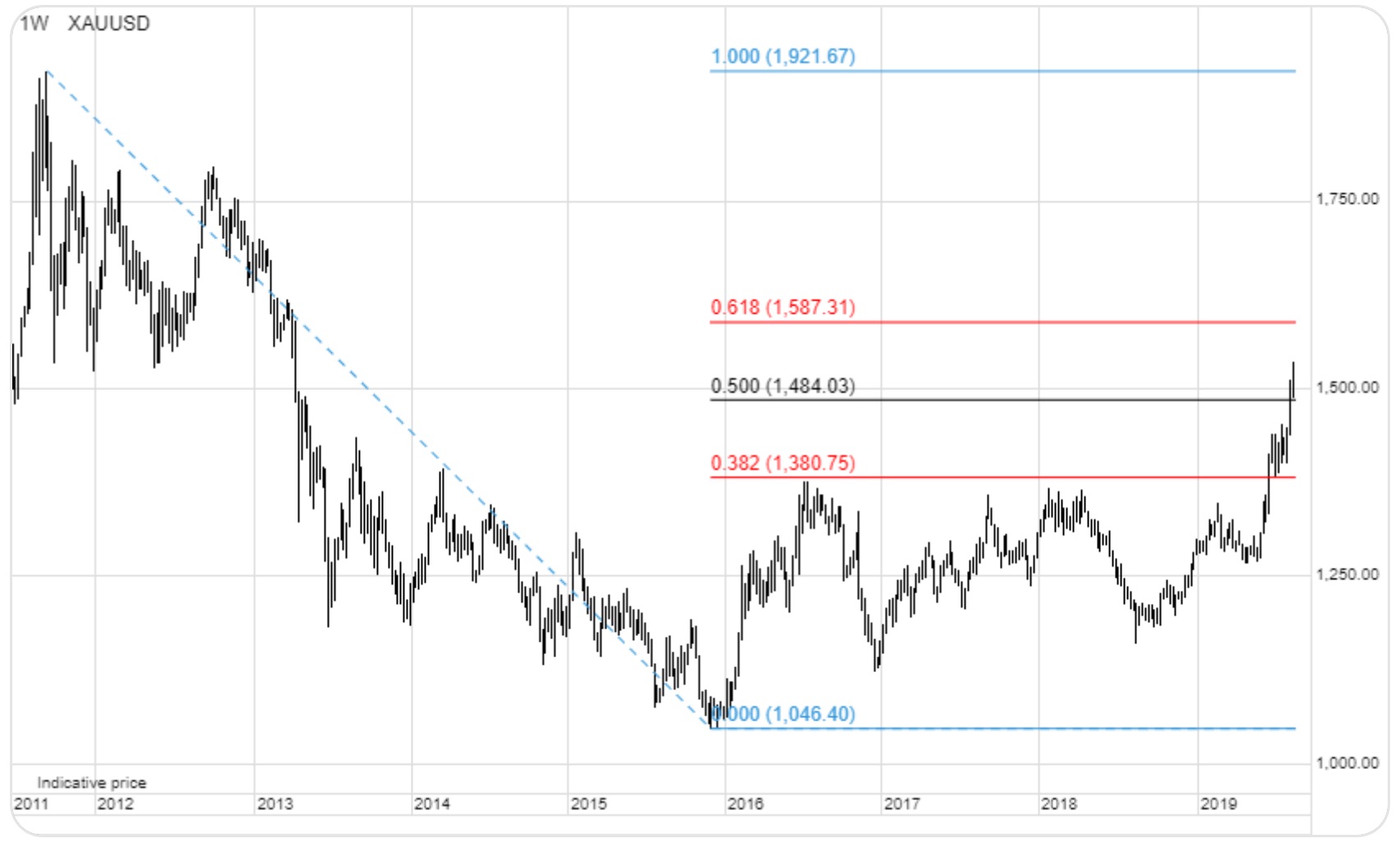 Gold’s Drop
Ole Hansen, Head of Commodity Strategy at SaxoBank:  “Gold dropped to $1480/oz on US tariff news. BOTTOM LINE: Apart from a delay on some items until Dec 15 the tariff hike will go ahead on Sept 1. Thereby violating one of three cardinal points from China which says tariffs must be rolled back before talks resume.”

A Historic Day For Markets! Plus Treasuries & Gold Remain The Flight To Safety CLICK HERE TO READ

Look At This Gold Chart! Checkmate, Everyone Just Keep Calm…Everything Is Fine, Plus A Look At Silver CLICK HERE TO READ

A Big Bet On Gold, Insane Currency Move, Trouble In China, Plus Some Argentineans Don’t Have To Worry CLICK HERE TO READ