On the heels of today’s rebound in the gold market, today legend Pierre Lassonde told King World News that we are seeing what he calls “The Perfect Gold 50 Year Storm.”

Lassonde is arguably the greatest company builder in the history of the mining sector.  He is past President of Newmont Mining, former Chairman of the World Gold Council and former Chairman of Franco Nevada.  Lassonde is one of the wealthiest, most respected individuals in the gold world, and as always King World News would like to thank him for sharing his wisdom with our global readers during this critical period in these markets.

October 22 (King World News) – Eric King:  “Pierre, we have had this sort of torture, almost like a thousand cuts on the downside but it appears to be over now. Your take on what’s happening in the gold market and the mining stocks.”

Pierre Lassonde:  “Eric, first of all hank you so much for having me on your show again. I think it’s always a pleasure. Specifically we are at a crossroads in the gold market so I think the timing is perfect. As I chatted with you a couple of days ago, what we are seeing is what I call The Perfect Gold 50 Year Storm…King World News has now released this important audio interview with legend Pierre Lassonde discussing The Perfect Gold 50 Year Gold Storm and you can listen to it by CLICKING HERE OR ON THE IMAGE BELOW.

Inflation Soaring
Peter Boockvar:  So we saw the sharp rise in US inflation breakevens yesterday with the 5 yr rising by 10 bps to 2.91%. That is the biggest one day move since April 13th … This matches the highest level ever for the 5 yr going back to 2002.

5 Year US Inflation Breakeven Highest Since 2002 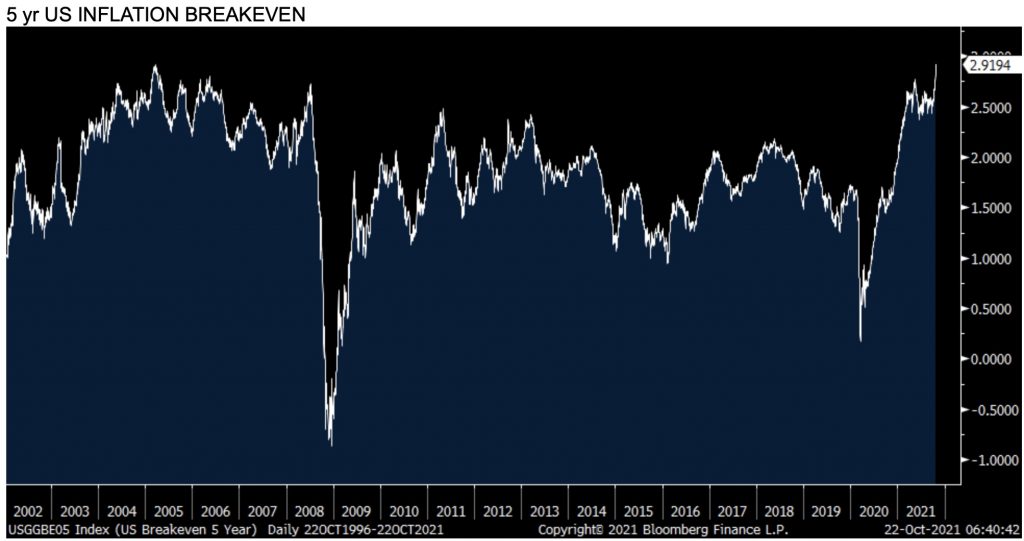 The 10 yr inflation breakeven rose to match a 15 year high at 2.65%. This has spilled over into Europe where inflation expectations continue to rise. The 5 yr 5 yr Euro inflation swap is jumping by 5 bps to exactly the central bank magic level of 2%. The last time it was here was September 2014, 3 months after the ECB went down the path of negative interest rate policy that they are now stuck in. 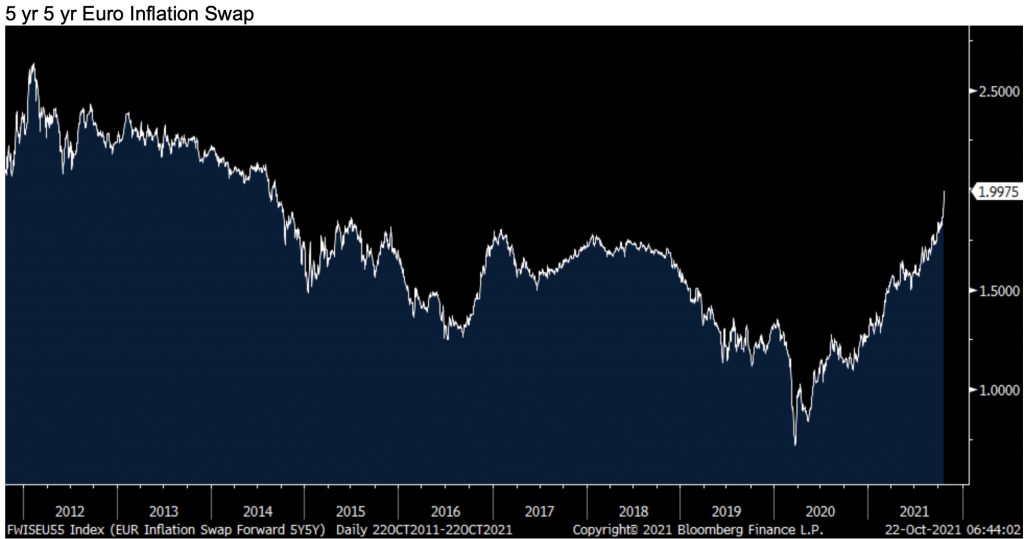 Days after Bundesbank head Jens Weidmann, the German 10 yr inflation breakeven is up almost 6 bps today to 1.93%, the highest in 9 years. 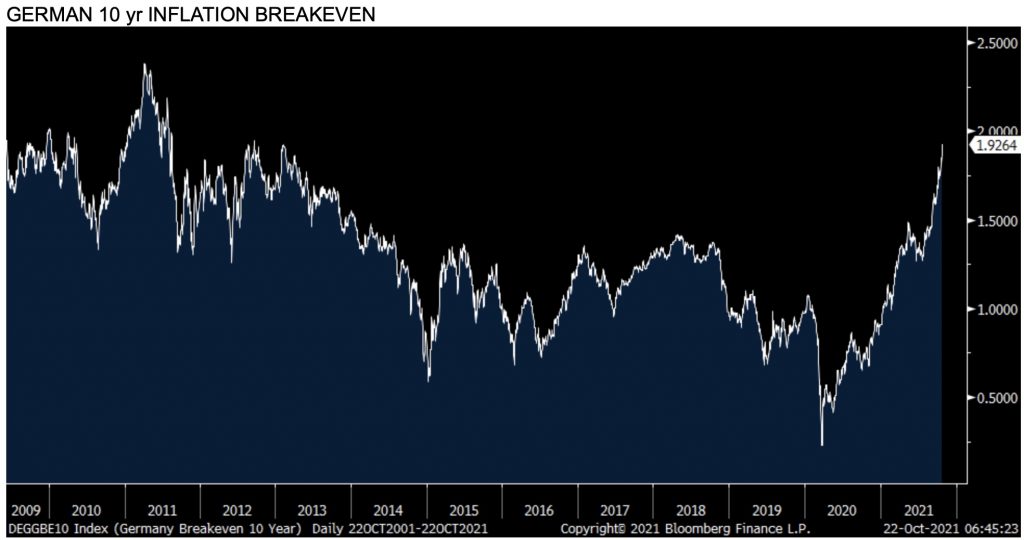 Lastly on this, the 10 yr UK inflation breakeven is jumping by 10 bps to 4.25%. This is the highest since 1996. These are unhinged daily moves now. 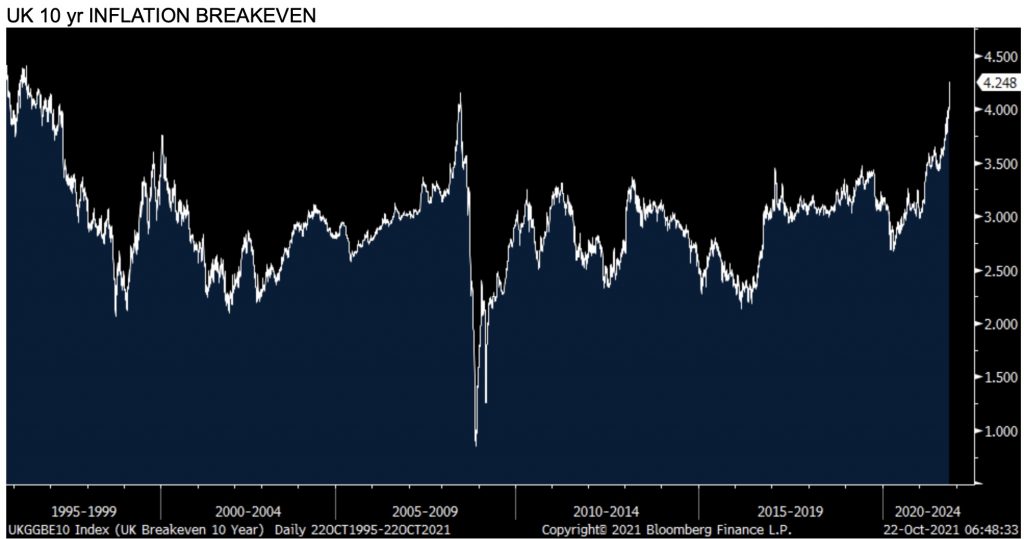 Compared to where monetary policy was calibrated at these previous moments in time, central banks have gone leaps and bounds further which means they have a long way to go to just get back to where they were, if they ever could without causing major disruptions.

One Of The Biggest Acquisitions Of The Year!
Torq Resources Inc. has acquired an option to earn a 100-per-cent interest in the 3,250-hectare (32.5-square-kilometre) Santa Cecilia gold-copper project, located in northern Chile. The project is in the southern region of the world-class Maricunga belt and immediately north of the El Indio belt. It is estimated that the Maricunga belt could host up to 90 million ounces of gold endowment. The belt is characterized by gold epithermal and gold – copper porphyry deposits, including world-class multi-million-ounce deposits such as Salares Norte, La Coipa, Cerro Maricunga, Marte, Lobo, La Pepa, El Volcan, Caspiche and Cerro Casale.

A Message from Shawn Wallace, Executive Chair & Director:
“The Santa Cecilia gold-copper project represents the culmination of our acquisition strategy in Chile. It is our belief that exploration at a project of this magnitude will be transformative for Torq. I would like to thank our entire team, both here in Vancouver and on the ground in Chile, for all their contributions. We look forward to unlocking the exploration potential of the property and adding long-term value for all stakeholders.”

“Santa Cecilia completes an extraordinary exploration pipeline, which includes our Margarita iron-oxide-copper-gold project, where drilling is ongoing, and the Andrea copper porphyry project, where exploration is expected to commence in early 2022. Our premier portfolio provides Torq Resources with great potential to make Chile’s next significant copper-gold discovery.”

A Message from Michael Henrichsen, Chief Geologist:
“Santa Cecilia represents an extraordinary opportunity for discovery in Chile. Effectively, it gives us the rare ability to step back in time, to the early 1990’s, when the first round of discoveries were being made within the Maricunga belt. The previous operator’s drilling has suggested a large oxide gold system and the potential for high-grade precious metal structures, while the two holes in 2012 have demonstrated a bona fide porphyry system beneath the near surface oxide mineralization. We are in an excellent position to expand both the oxide and porphyry mineralized systems as well as to drill entirely new high quality targets for the first time, which we believe have the potential to contribute to the discovery of a cluster of mineralized porphyry bodies.”

A Message from Waldo Cuadra, General Manager, Chile:
“As an explorationist, to be able to identify, acquire and begin exploration at a project such as Santa Cecilia, located within the gold-copper porphyry belt in Maricunga, is an exceptional event. Our group in Chile has been pursuing this project for many years, and finally, with the full Torq Resources team, we have been able to negotiate a favorable agreement. This is a significant milestone, and we very much look forward to initiating exploration at a project we believe holds significant potential for the discovery of a world-class gold-copper deposit. Torq Resources, symbol TORQ in Canada and TRBMF in the US.