With the Dow surging more than 100 points and the precious metals still consolidating, the silver market now has a major launch point!

Silver
By Michael Oliver, MSA (Momentum Structural Analysis)
June 1 (King World News) – The primary long-term buy signal was back in February 2016, as this momentum chart moved out above the lower red line (price closed that month at $14.89). 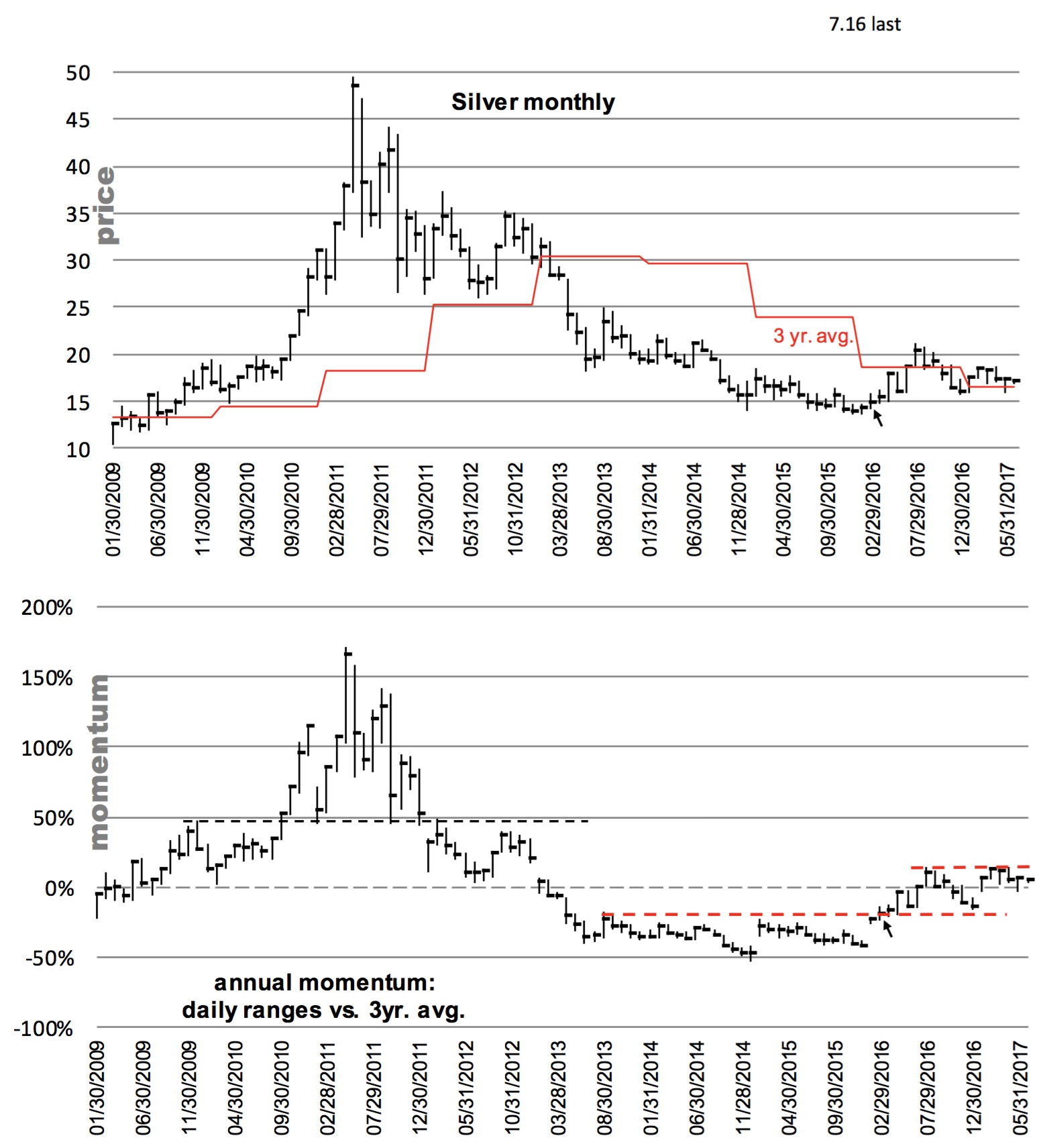 In our May 4th, 2017 report we showed some archival examples of how gold transitioned in the past from bull to bear and bear to bull.  Same concepts apply to silver and many markets.  It is usually a laborious process involving a year and a half or so before a new long term trend change is clear enough for most to see, though annual momentum usually signals the new trend outcome very early on…

For silver that breakout is noted by the arrow in February 2016.  The sharp pullback by silver into late 2016 was an example of the laborious nature of trend transition—in this case the post-breakout “correction.”  Note that the momentum readings during that decline held on top of the prior breakout line on momentum (lower red line), and then by April of this year the momentum readings were back up to 13% over the zero line, precisely back up to last year’s peak annual oscillator reading.  Last month’s pullback put downticks into the readings, pulling back to –2%.  Since then rallying again.

What we are seeing develop here is a potential secondary major upside signal by annual momentum, (primary buy was in February 2016).  A potent structure is setting up.  To visualize it another way, we shift to a point and figure version of annual momentum.

This point and figure chart shows annual momentum (bar chart on prior page) from the lows in the summer of 2013 (the gold and silver crash) to the present. 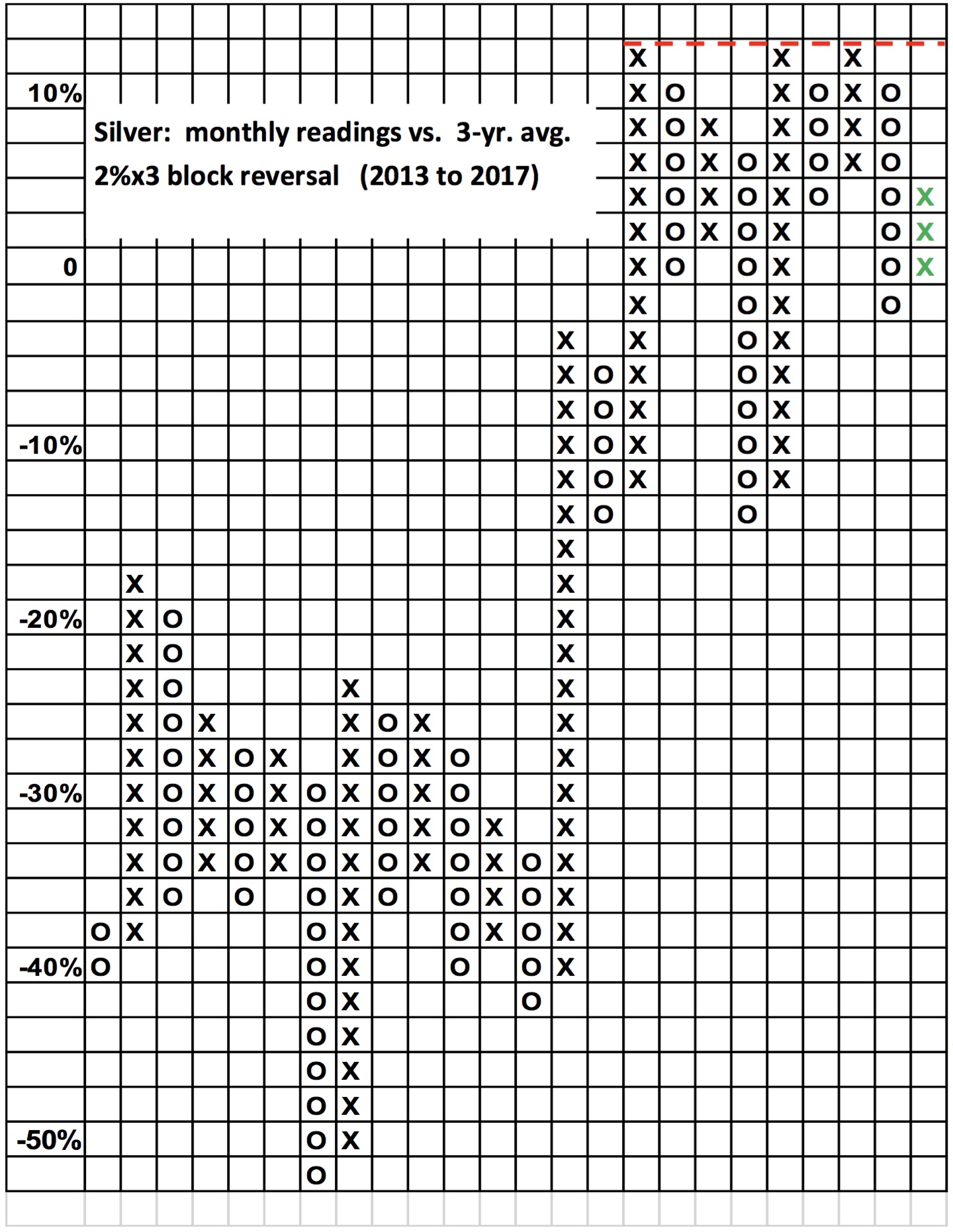 Each month’s action either upticks are added (2% increment blocks) or reversal ticks are plotted if there has been at least a 3 block (6%) change in the monthly readings from one month to another.  Jiggles of lesser size are not important to this chart.

As you can see the +12% level (when we round to 2% increments) is a shallow overhead resistance level, red lined.  We say “shallow” because if you reference the annual momentum chart on page one you can see that these upside readings  of 2016 and 2017 are hardly excessive.  If we see price trade to 14% over the 3-yr. avg. traded (3-yr. avg. is $16.469) – meaning $18.77, then that will constitute a major secondary breakout (quadruple top momentum breakout).

The green, tentative upticks (Xs) plotted are for June action so far (first day into the month).

Major point is to make note of $18.77 as a massive breakout level for any next leg up in silver.  No, that price is of little consequence when you look at a price chart and last year’s price high which was $21.095, but for momentum it is a potent price if seen.

And frankly if you are a silver bear, be very nervous indeed even if ticks return to +12%, knocking on the red line again (price of $18.44 needed to achieve those upticks).

***ALSO JUST RELEASED: This Will Be The Big Moment In Which Gold Will Begin To Shine Again CLICK HERE.