With gold surging more than $20 and silver up more than 30 cents, today Peter Boockvar asks the all-important question to investors, “Got gold?”

Peter Boockvar:  So let me get this straight, on January 29th the BoJ surprised markets by moving to a negative interest rate of .1% on bank deposits and the move completely back fires as the yen goes from 121 to 108 in the following months. The Nikkei cracks by 15% in two weeks. The only beneficiary were JGB’s. The BoJ then decides overnight not to push deeper with this policy in a show of patience to see how the January move plays out and maybe not to panic the markets again and the yen rips further and the Nikkei falls almost 4%…

Peter Boockvar continues:  The pain trade in particular from January were in the Japanese banks due to the crushing of their margins and the penalty rate so what does Mitsubishi UFJ do overnight on a pause in negative rate policy, it falls 6% on top of the 5% drop in the two prior days. Mizuho Financial plunged by 6.5%. I GIVE UP! JGB’s had the muted but mixed response as the 10 year yield rose 2.5 bps while the 30 year yield fell by 5.5 bps.

Bottom line, markets are now behaving worse than spoiled little children as now it’s getting even tougher to gauge what they really want from our central bankers that are losing credibility with their monetary reputations every day. I’ll venture to guess that many are realizing that we are at the end of the road in this cycle of modern day monetary extremism notwithstanding Kuroda’s belief that he doesn’t “think there are limits to monetary policy measures.”

For the action in Japanese banks today, investors were likely disappointed the BoJ didn’t go the way of the ECB in paying them to lend. Got gold?

As for the Fed after yesterday’s statement, I’ll say to them: Your mandate isn’t to have a perfect world. That only exists in fairly tales, dreams and in your econometric models.

Japan also reported important economic data overnight. Headline CPI for March fell .1% m/o/m vs the estimate of unchanged. The core rate was higher by .7% y/o/y, also one tenth less than expected and down from .8% in February. The core rate has been in a .7-.9% range for the past 8 months which is the highest level since the late 1990’s not including the VAT related spike in ’14-‘15. The BoJ doesn’t realize that inflation is a symptom, not the disease.

The Japanese unemployment rate fell one tenth to 3.2%, matching the lowest level since 1997 but the composition was not good as the number of employed fell by 130k and 180k left the labor market. The jobs to applicant ratio rose to 1.30 vs the estimate of 1.28 and that is the most since 1991. The labor market is tight as a drum based on this figure but the mix remains an issue due to the many part timers who face off against the entrenched full timers.

Overall household spending in Japan in March fell 5.3% y/o/y, worse than the estimate of down 4.1%. Industrial production on the other hand improved by 3.6% m/o/m in March which was better than the forecast of up 2.8%. The economic data out of Japan today remains very uneven.

Economic confidence in the eurozone in April improved to 103.9 from 103 in March, 103.9 in February and 105 in January. That was a touch above the estimate of 103.4 as manufacturing, services, construction and the consumer rose m/o/m. Retail sentiment fell slightly. The European economy is slow but steady. The euro is higher but likely being dragged by the move in the yen and European stock markets are certainly moving in concert with Japan and the S&P futures.

Germany reported better than expected labor market data as the number of unemployed in April fell by 16k instead of remaining unchanged as expected. The unemployment rate held at the lowest level since reunification. The Germans we know are dealing with a  massive influx of migrants and a high absorption rate of them into the work force would do wonders for their economy. Unfortunately, non European refugees saw a rise in joblessness in April but hopefully this will change and domestic demand can offset the challenges of soft global trade that their export heavy economy is so reliant on.

After seeing a modest fall in the bull/bear spread off the widest since August in the weekly II measure of stock market sentiment, the individual investor AAII survey got very neutral. Bulls fell 6 points to 27.4 after rising by 5.5 points last week. Bears rose by 4.7 points to 28.6, the most since March 3rd while those that are Neutral rose by 1.4 points to 44 and has been above 40 for 7 straight weeks. With the US stock market very expensive again and seemingly only reliant on the lack of rate hikes from the Fed in the face of falling earnings and an economic growth rate that will likely have a one handle this year, there is very little margin of safety.

King World News note:  Many investors have been waiting for a major pullback to buy the high quality mining shares.  Others have been selling into the rallies and losing their positions.  This bull market is doing what bull markets do, it’s shaking out weak hands and not letting people in by giving them anything more than very short and shallow pullbacks (see early stages of the mining stock bull market advance on the chart below).

It’s also important to note that the public is not invested in the mining space in any way.

As for silver, there is trouble ahead in terms of global supply.  This should make silver’s advance quite exciting in terms of future price gains (see chart below). 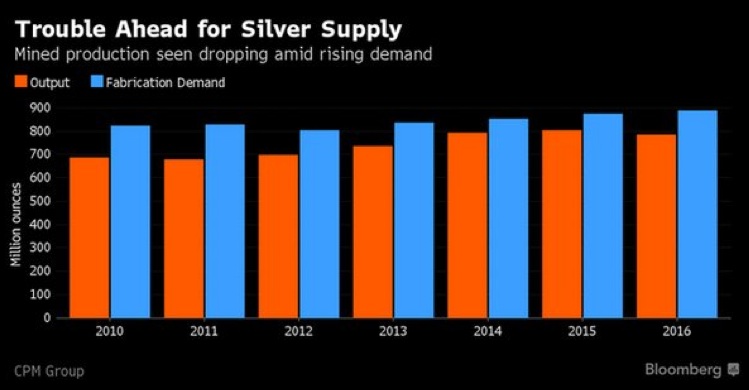 The bottom line is that there is an enormous amount of money that is still due to enter this bull market in gold, silver and the high quality mining shares, it will just have to do so at much higher price levels.