ALERT: One Shock After Another Will Create The Biggest Collapse Ever In World Financial Markets In 2017

As we kickoff the second week of trading in the new year, today the man who has become legendary for his predictions on QE, historic moves in currencies, warned King World News that one shock after another will create the biggest collapse ever in world financial markets in 2017.

Terrifying Worldwide Panic In 2017
Egon von Greyerz:  “We are only a week into 2017 but some longer-term trend changes are developing. It is interesting how a new year, combined with a new U.S. president act as a catalyst for what will be the start of monumental events in the world economy. Not that many of these will come as a surprise to the well-informed KWN audience, but for the rest of the world there will be one shock after the next that will create terrifying panic…

Egon von Greyerz continues:  “It seems that we are now seeing the beginning of reversals in many markets. Some of these new trends will take longer to develop and some could happen surprisingly quickly. Most major markets will be affected, namely bond & credit markets, currencies, stocks, metals, precious metals mining stocks and property.

Let’s first look at the biggest bubble of all bubbles in history – the global bond market.

This is a market which has virtually exploded from $10 trillion in 1990 to $100 trillion today. And if we look at the debt expansion in the last 10 years since the Great Financial Crisis started in 2006, the global bond market has gone up by 70%. 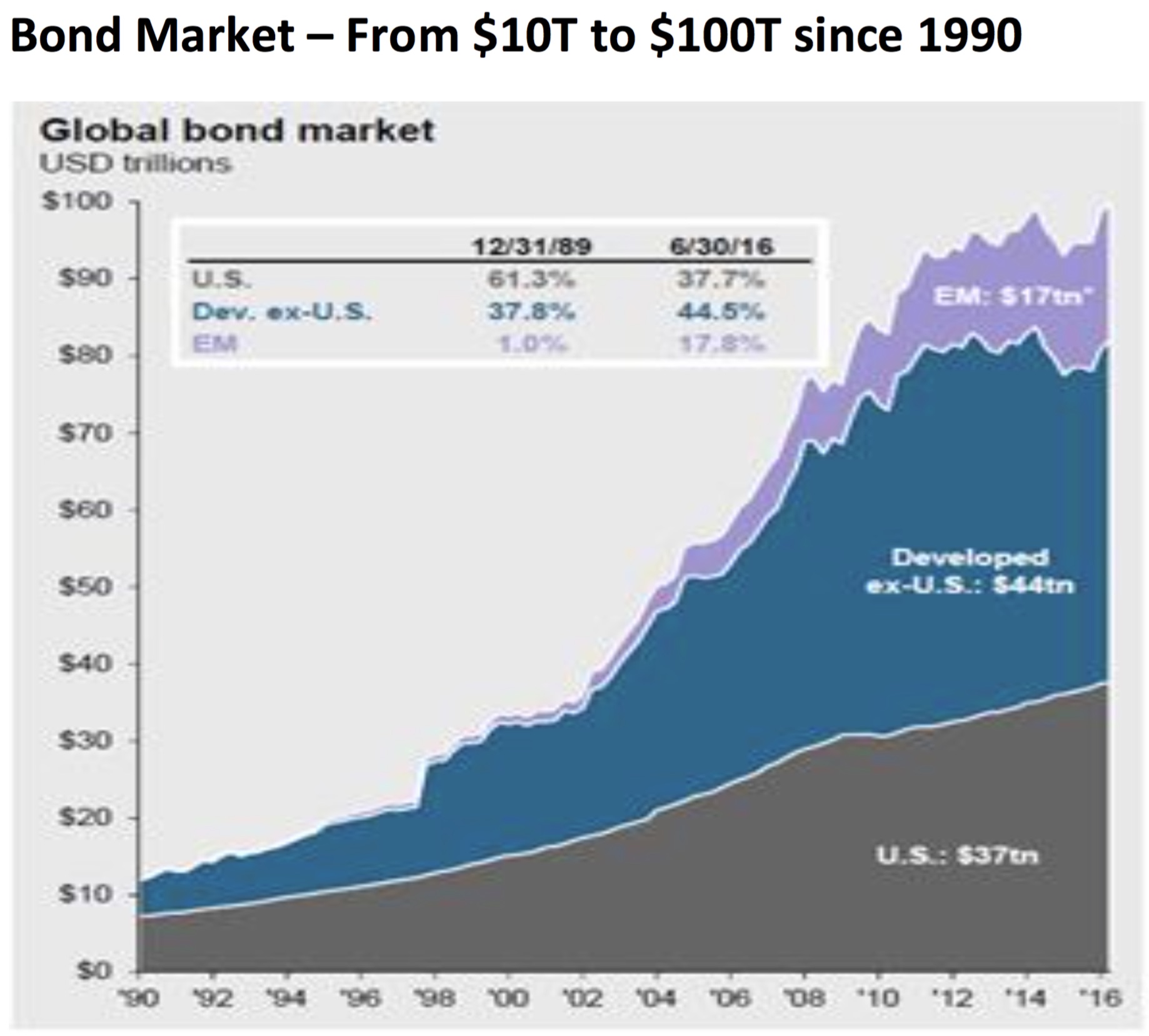 With the 10-times increase in the global bond market since 1990, you would have expected to see a major expansion of global GDP, but this is far from the case. World GDP has gone from $20 trillion in 1990 to $74 trillion today. This is an increase of only 3.7X. For every $1 increase in GDP, the world has had to issue 2.7X times that in bonds. That is what is called the law of diminishing returns. More and more debt is required to expand the global economy. 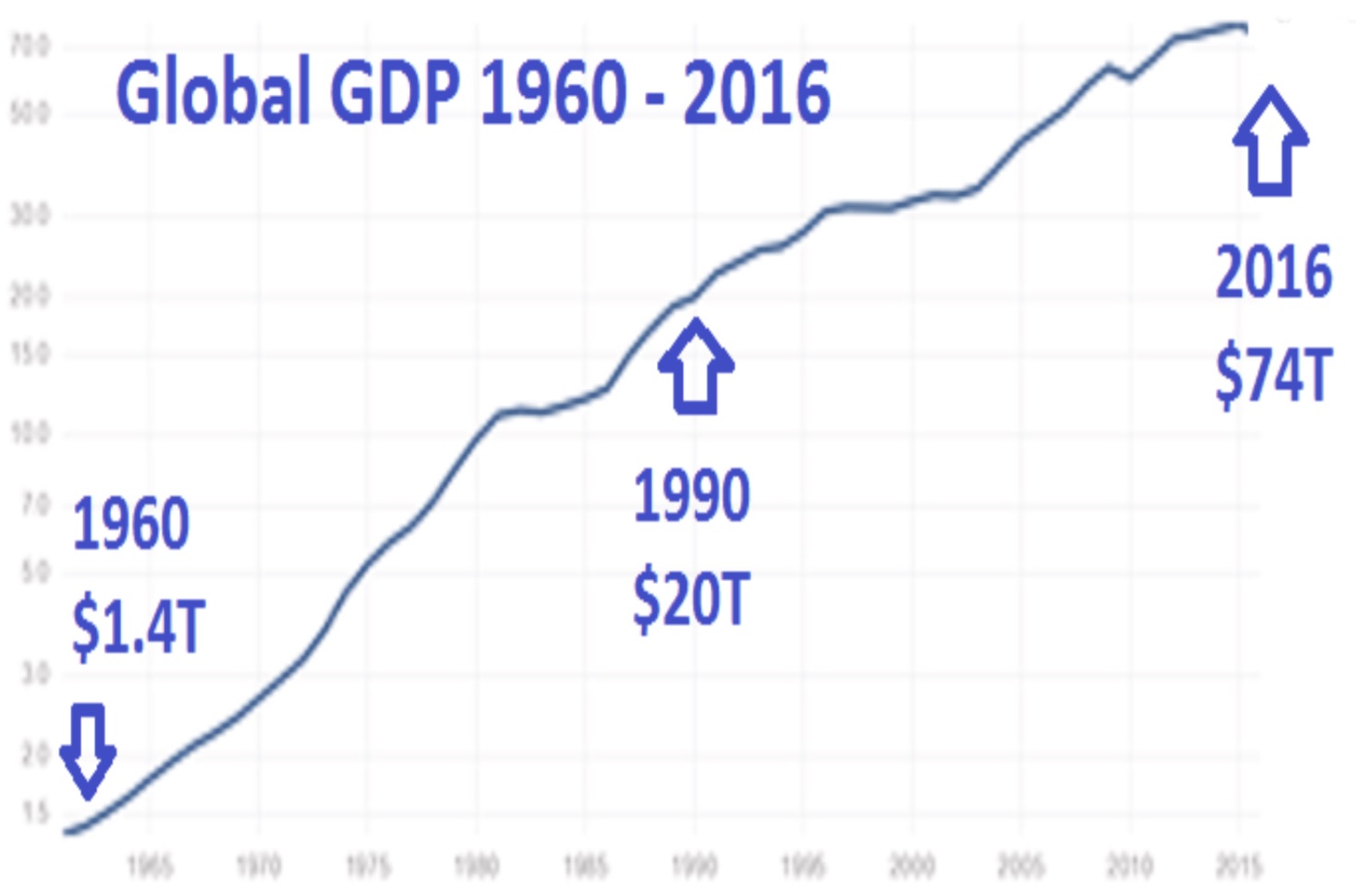 Sovereign bonds are over 50% of this market, and it is governments worldwide that have been the most profligate in creating debt. No government will ever be in a position to repay this debt with real money. The problem they have is that they can’t even afford to service the debt. This is why roughly $15 trillion of government bonds now carry negative interest rates. This includes over 50% of the bonds issued by Germany, Netherlands, Sweden and Finland. In Switzerland, virtually all government bonds are below 0%. (not shown). 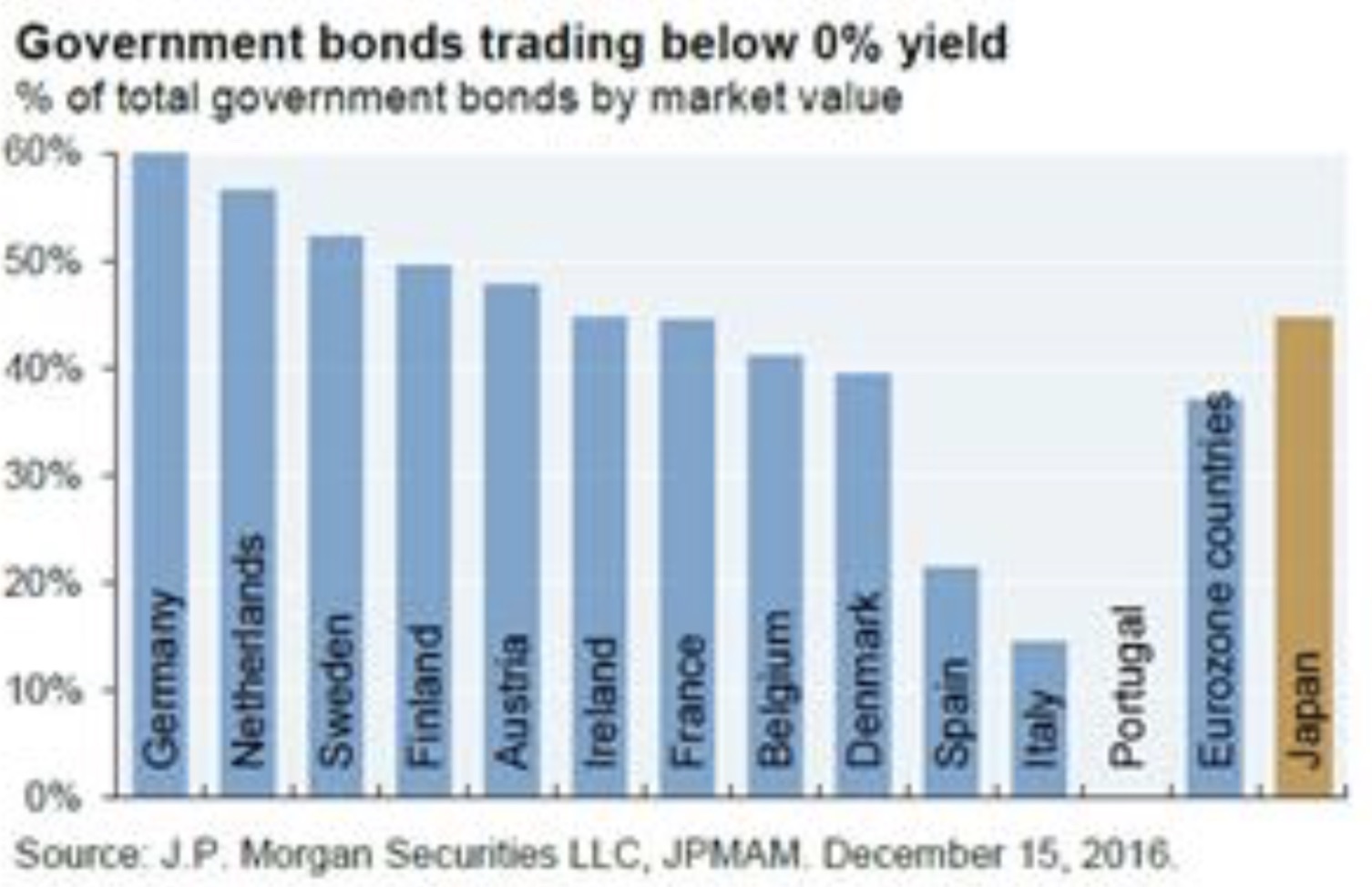 The Biggest Collapse Ever In World Financial Markets
So we are seeing a global debt explosion combined with zero or negative interest rates. In a free market, this could never happen. Record borrowings in a market without intervention would lead to very high interest rates. A high demand for a commodity, like money, would, in accordance with the laws of supply and demand, lead to a high cost. Thus, what we are seeing is the effect of financial repression or manipulation of the interest markets, like the manipulation (or centralized planning) of all financial markets. Of course this fantasy cannot last. And it is the turn in the bond market, which just started, that will cause the biggest collapse in the world financial markets ever! 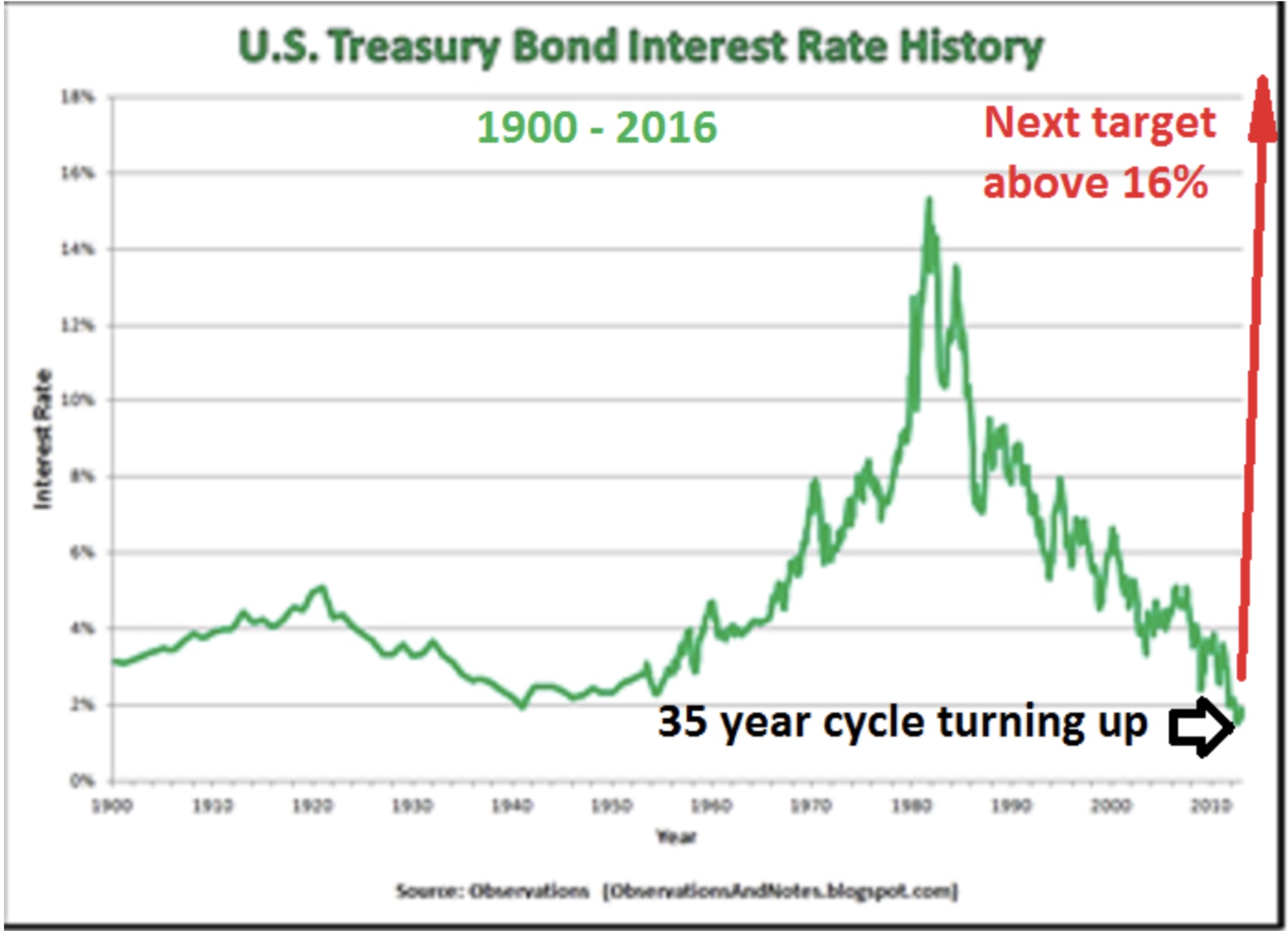 A collapse of U.S. bonds would not just cause panic in global bond markets but also in currency markets. Just as the bond market has turned down (yields up), it seems that the U.S. dollar has now topped and will continue its long-term downtrend. The Dollar Index (pictured below) shows that the new correction high is not confirmed by the technical indicators. The dollar against the Euro shows a similar picture. 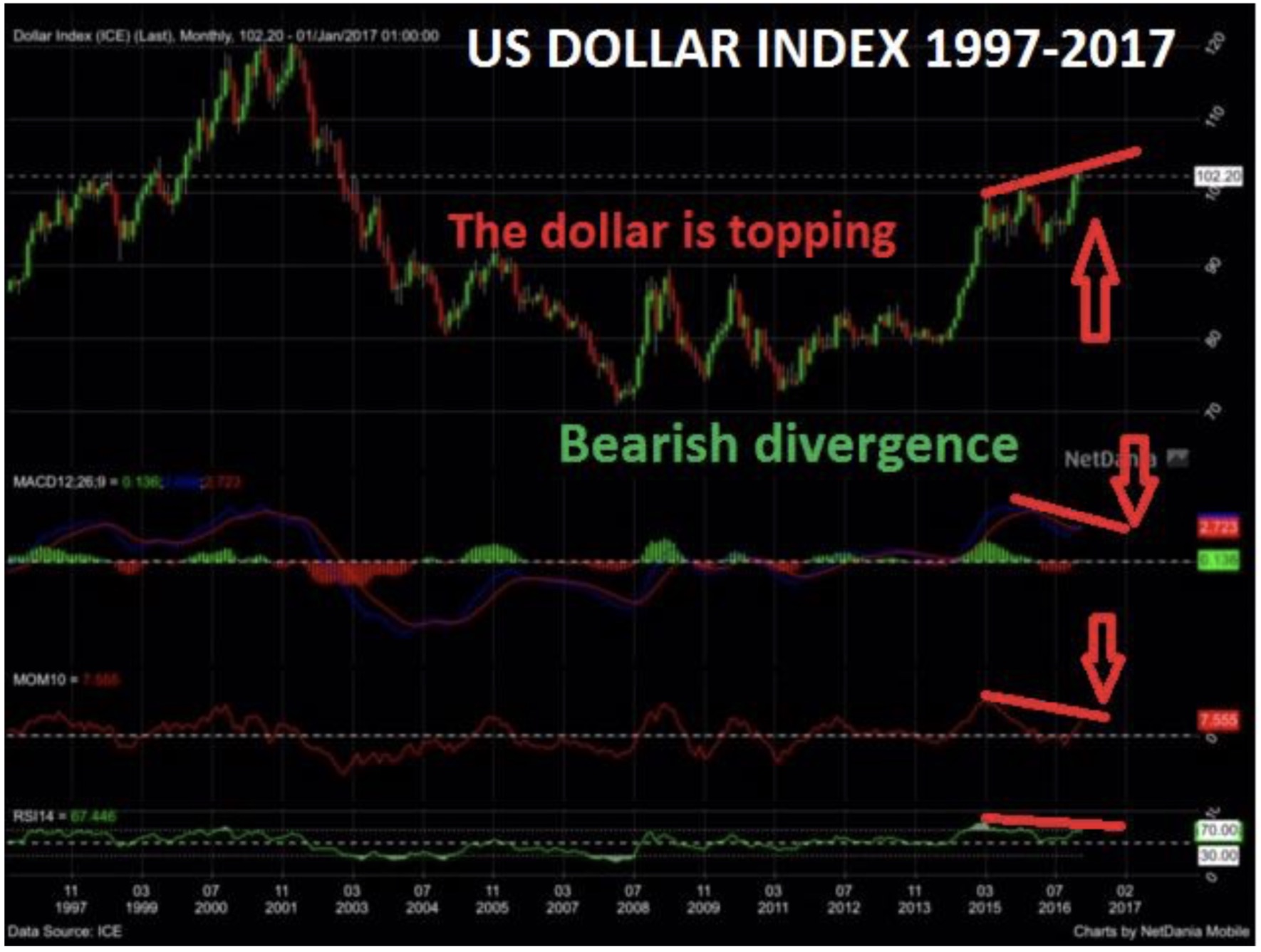 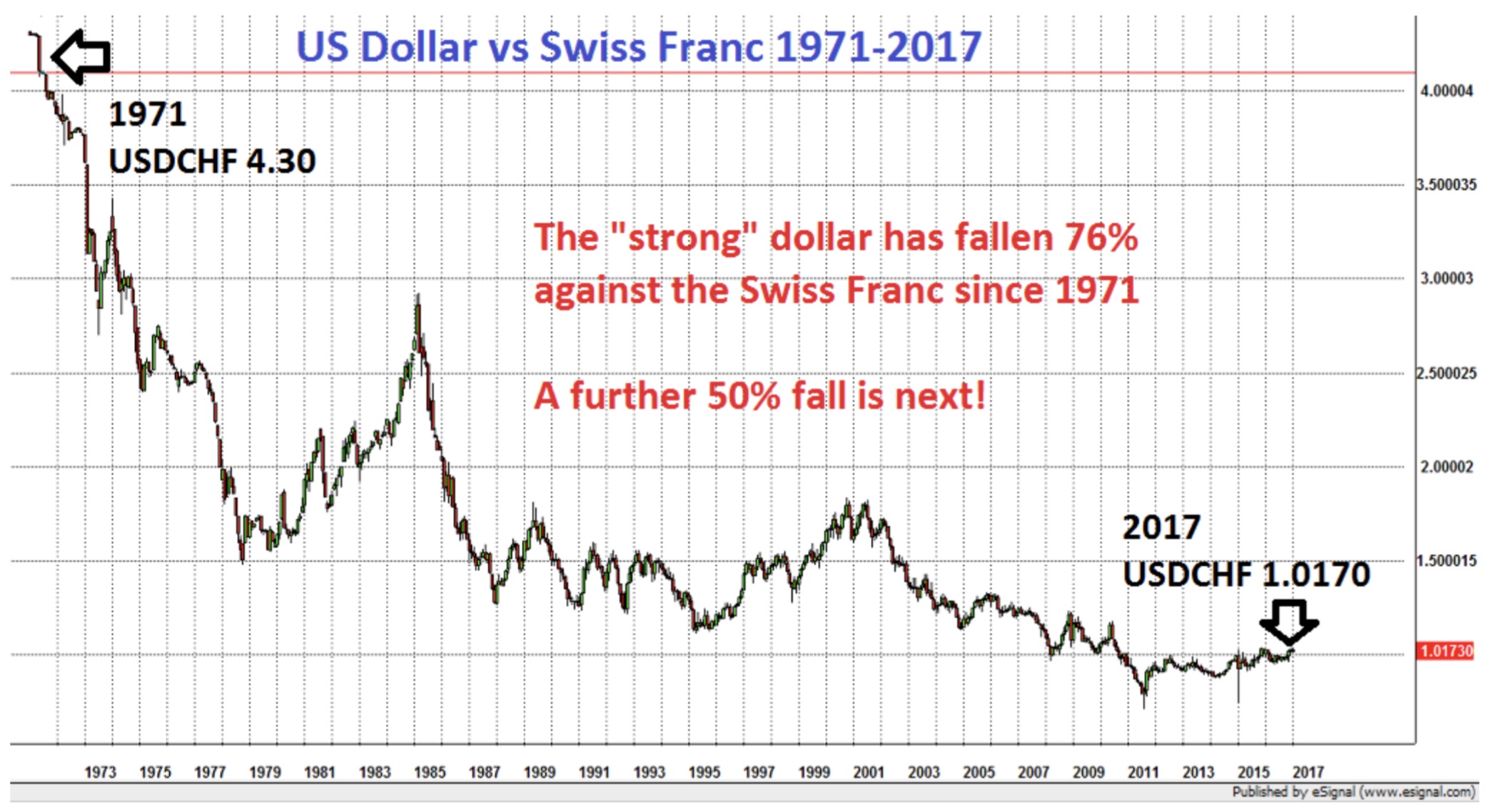 So it looks like the dollar will lead the race to the bottom of all the currencies. No currency will fall in a straight line and they will all take turns in this race. What holders of dollars and other currencies must remember is that governments and central banks will be under tremendous pressure during a simultaneous fall of credit markets and currency markets because both these events will lead to massive pressure on the financial system, especially the banks. Governments will need to take draconian measures in their futile attempt to save the banks. It will of course be impossible to take any money out except for very small expenses and even that might not be available. It will be mandatory to invest the major part of deposits and any other assets in your bank account in government bonds that must be kept for an undetermined period.

At the same time, as most bank assets will be frozen, there will be very strict exchange controls. This will make it totally impossible to transfer any funds out of the country except for some commercial transactions. So there is not much time left for investors to put their house in order and take the necessary wealth protection measures. This involves holding physical gold and silver in the safest jurisdictions outside your country of residence and outside of the banking system.

Bitcoin has benefitted from the current fear in financial markets and has risen 100% since January 2016. But it is a volatile market and in the last couple of days we have seen a 25% fall. It is likely that Bitcoin will continue to rise since many investors believe that this is the best way to avoid any currency restrictions, regulations, bank failures or confiscation. I do think that as a speculative investment Bitcoin could rise a lot further. But investors must remember that Bitcoin has nothing to do with wealth preservation. Bitcoin is an electronic currency not dissimilar from paper money. Bitcoin, like paper money, has zero intrinsic value. Also, there are a great many risks. As an example, Bitcoins can disappear without trace. And if something happens to the internet, such as a temporary shutdown or cyber-attacks, investors will have a problem accessing their Bitcoins. Having said that, I see the biggest problem being government regulations.

If Bitcoin and other cyber currencies are too successful, governments will start regulating that market until it becomes just another paper currency.

I still don’t see a better form of wealth preservation than precious metals. If you look at gold, in many currencies bottomed in 2013. In dollars, gold bottomed at the end of 2015. We saw a strong move up until mid-2016 and since then both gold and silver have corrected. It looks like this correction is now finished and the clearest indication of that is given by the HUI or Gold Bugs Index. Since December 19, 2016, the HUI is already up 22%.

Gold is only up 4% in dollar terms since the correction low on December 15. Whether gold (and silver) lingers at these levels for a bit longer or if they move up quickly from here is irrelevant. The reason for this is because 2017 will see a major move up in the whole precious metals complex and that move is likely to be spectacular. But regardless of the magnitude of this move, the wealth preservation aspect of physical precious metals is paramount.” ***KWN has now released the extraordinary audio interview with the man who advises the most prominent sovereign wealth funds, hedge funds, and institutional funds on the planet and you can listen to it by CLICKING HERE OR ON THE IMAGE BELOW.