There is no question that nothing is real at this point. Here is a visual journey through the current market absurdity.

Nothing is Real: A Visual Journey Through Market Absurdity
September 9 (King World News) – Matthew Piepenburg at Matterhorn Asset Management (based in Switzerland):  When it comes to modern markets, risk assets and the now entirely twisted tango of accepted fiscal and monetary policy gone wild, it’s safe (rather than sensational) to simply confess that nothing is real.

As I recently watched BTC drop by 16% in one hour from $50K to $43K, only to reach back up to $46K in 20 minutes, my 20+ years of Wall Street experience watched with bemused yet experienced awe at what amounted to just another day of leverage, emotion and institutionalized front-running as the big money whales in crypto pulled off yet another media and SEC-ignored pump-dump-and-pump trade.

In short, the unreal has simply become business as usual…

Real Education vs. Surreal Facts
By 1997, I had graduated from a long, iconic and expensive list of higher educational institutions which emphasized critical thinking, objective data, historical context and basic math.

But had I told a single professor back then that one day we’d see the simultaneous occurrence of Treasury Yields at 1.35%… 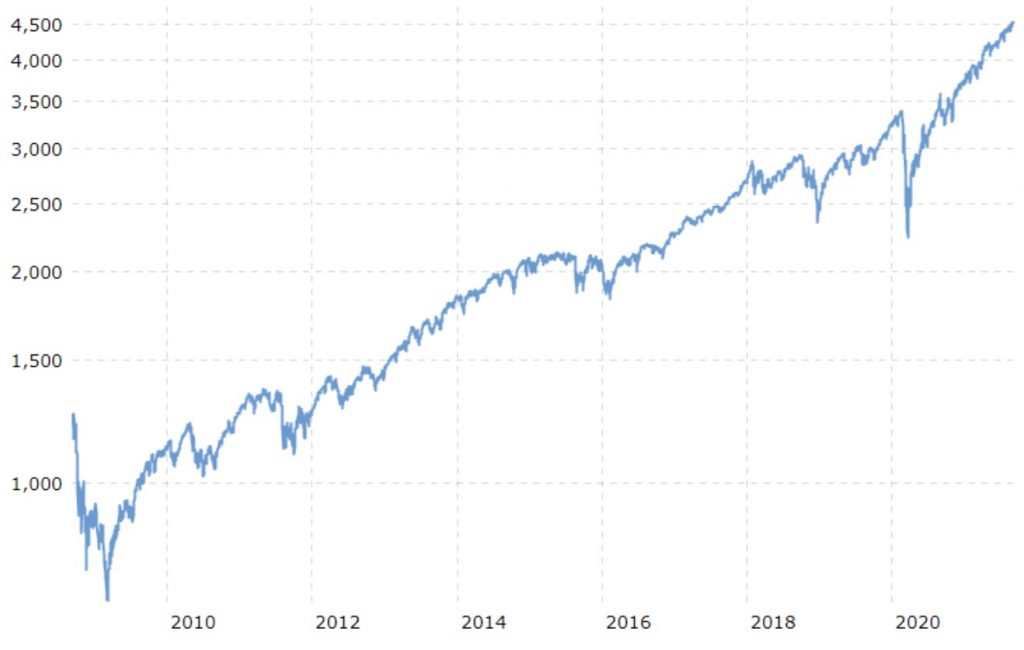 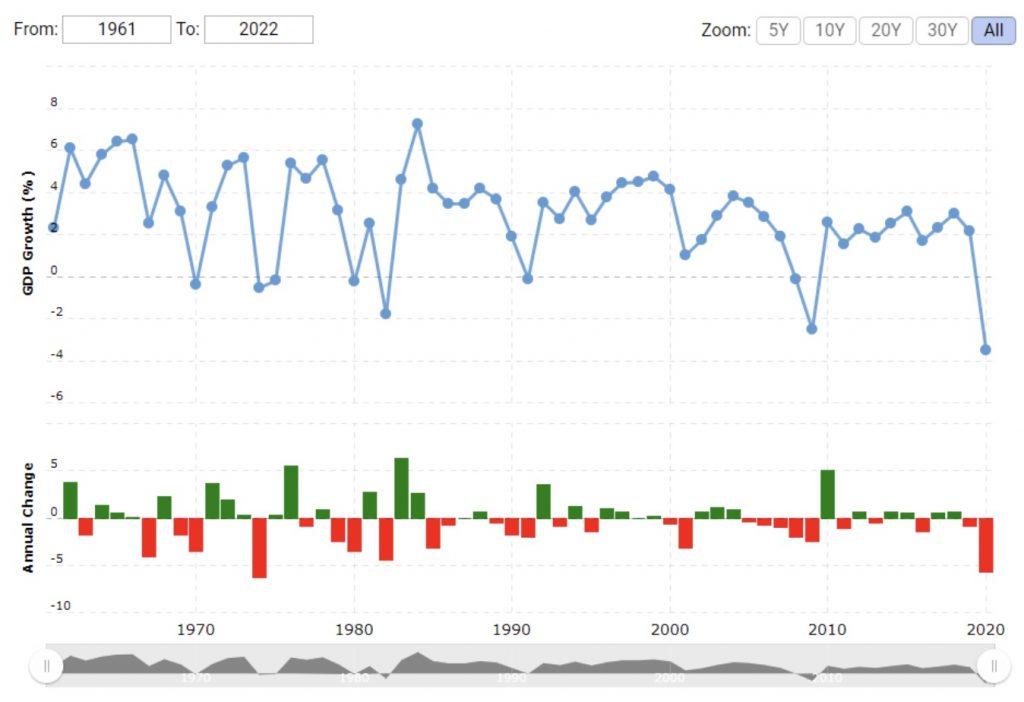 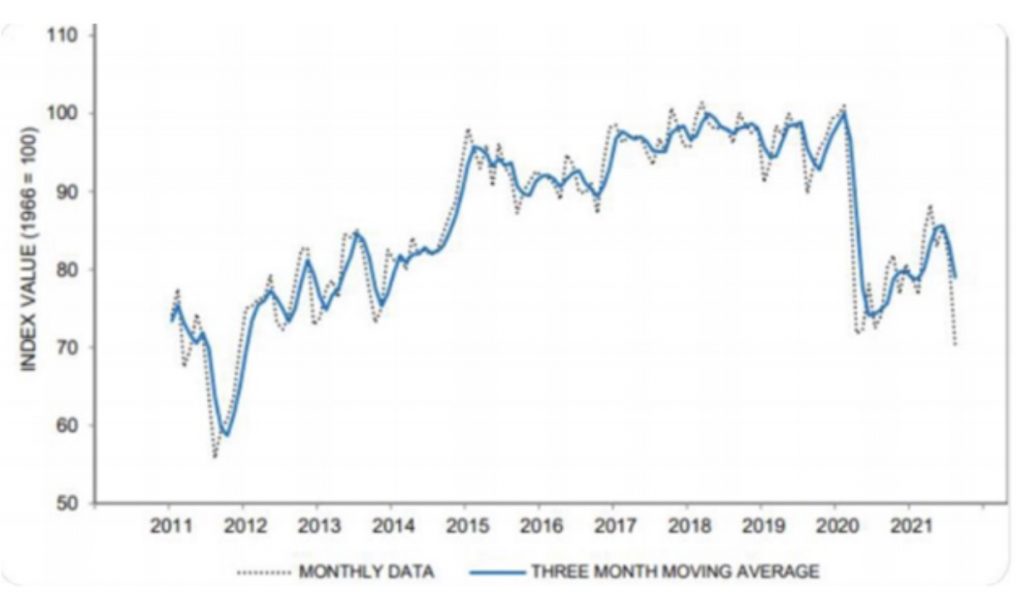 … it’s likely they’d ask me to return my diploma.

Because everything I (and all the rest of us) had been taught long ago was that rising risk assets reflect healthy economic growth, vigorous natural demand and a robust confidence in continued productivity and hence free-market price discovery.

That, at least, was the “reality” that nine years of secondary (post high-school) education gave me before I began my first toe-dip into the public exchanges (i.e., asset bubbles) of 1999.

Experience vs. Theory
What did I learn after watching the NASDAQ rise to the moon in 2000 and then puke by greater than 80% in 2003, and a sub-prime bubble that had investors giddy in 2006 and on their knees by the autumn of 2008, or far more recently, a decade+ bull market hitting needle-peak highs on the backs $28T in national debt and a Fed balance sheet that bloated from $800 billion in 2000 to over $7 trillion by 2020?

The answer is simple: Nothing I learned in school was “real” and nothing about our current moment in time has even the slightest resemblance to anything remotely characterized as natural, free-market or fair-price -driven.

Instead, we live in a dystopian world of engineered markets, centralized economies and dis-information in which extreme money creation by 5 central banks increased their balance sheets by 12X like this… 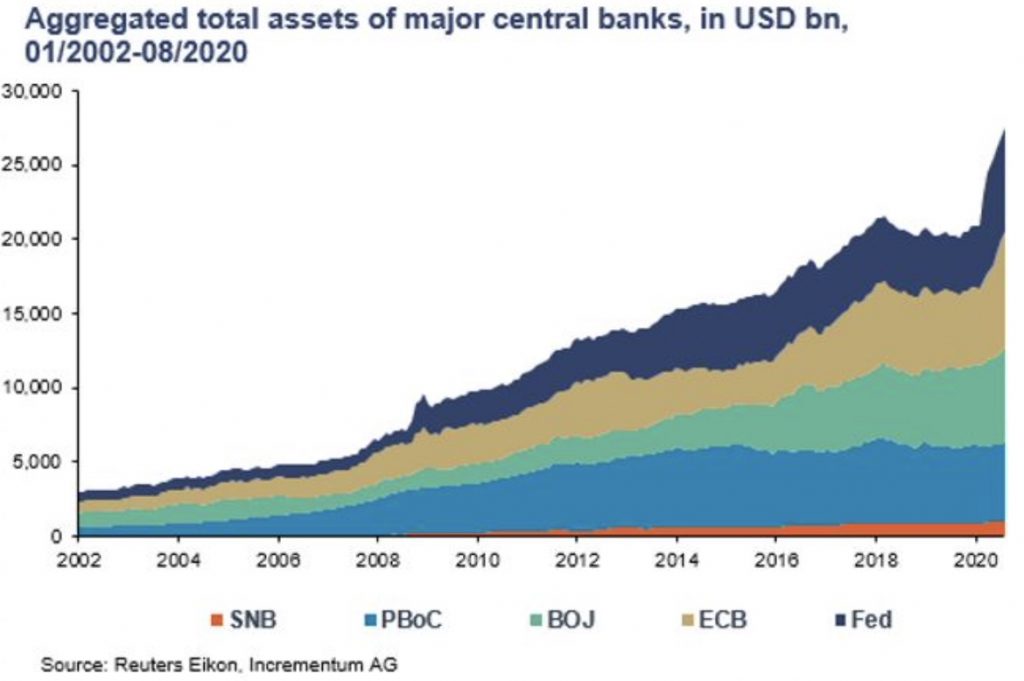 …leading to un-natural (i.e., “accommodated”) credit markets in which sovereign bonds offer negative (and technically defaulting) yields like this… 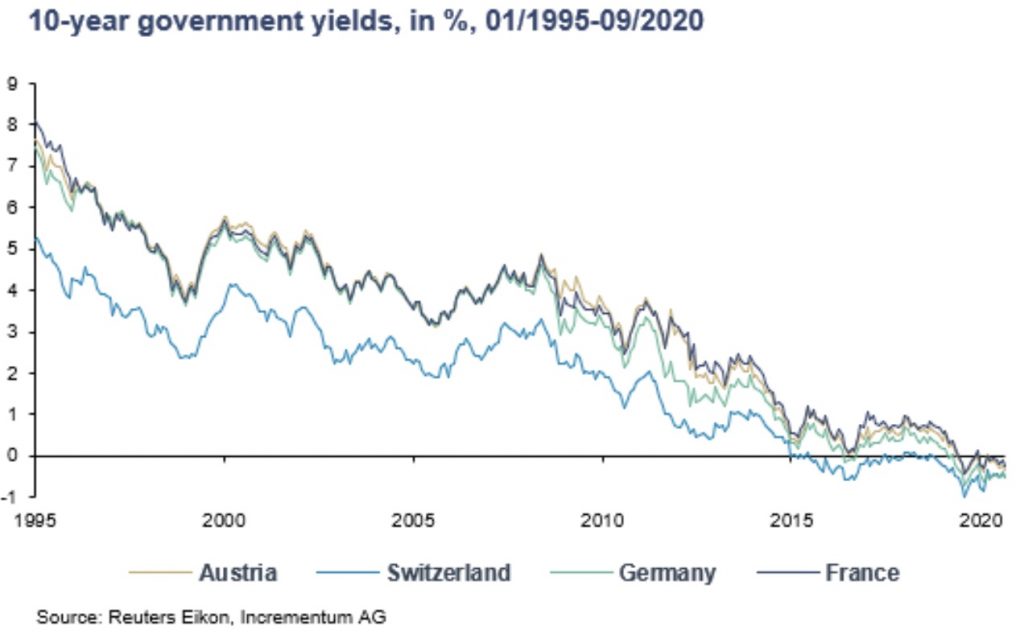 …which makes the cost of debt free for a select minority, allowing corporations to live (and bloat) off their own stock buy-backs at levels this… 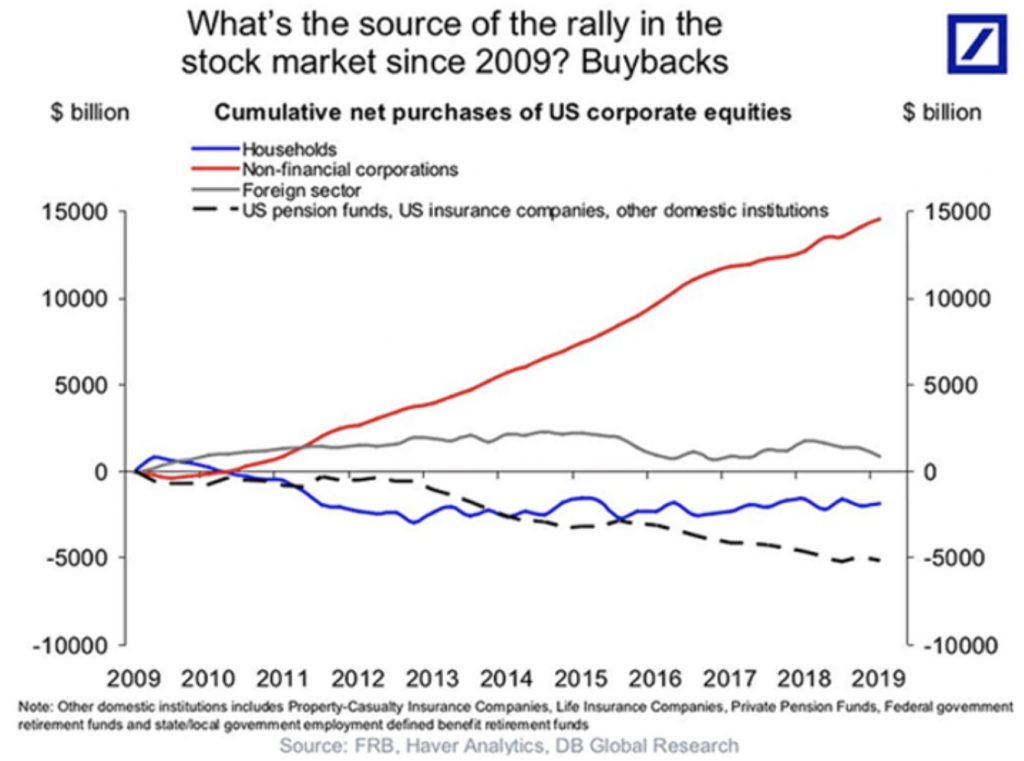 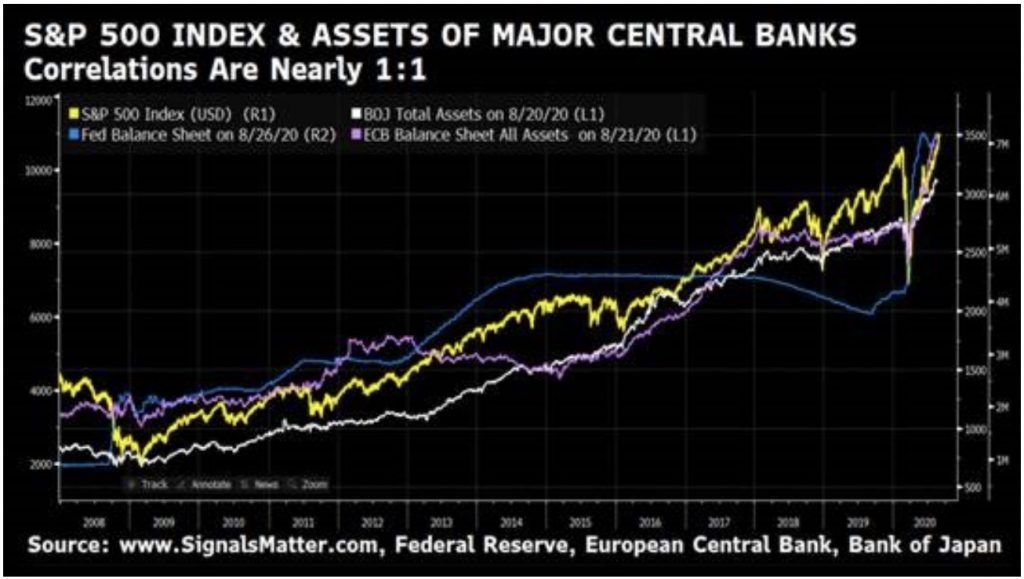 …in which greater than 86% of that market wealth is enjoyed by just the top 10% of the population, leading to wealth disparity at record levels like this… 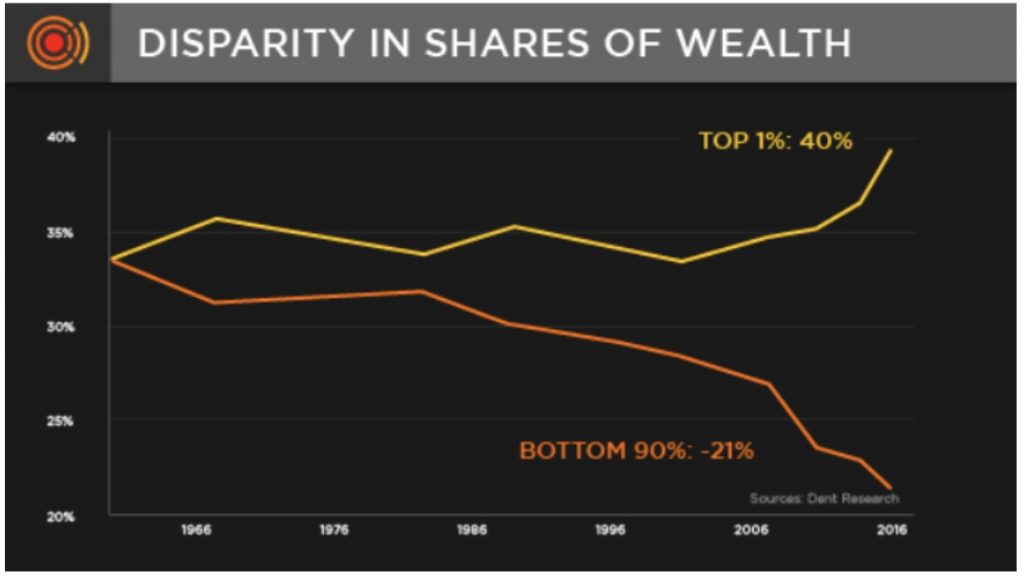 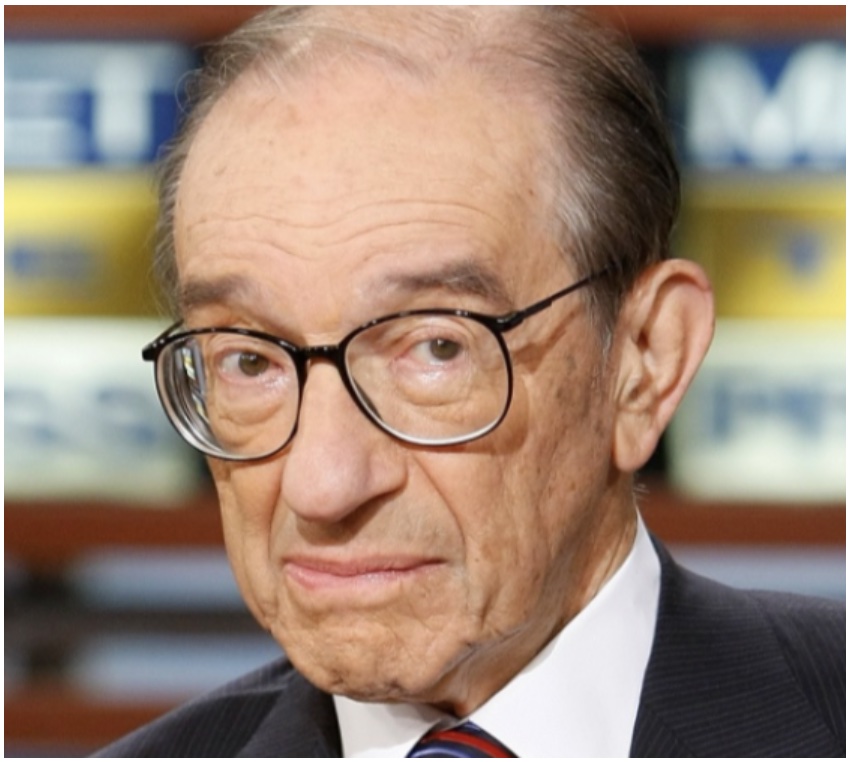 …who directly caused this historical distortion of capitalism, congratulate themselves on book tours like this… 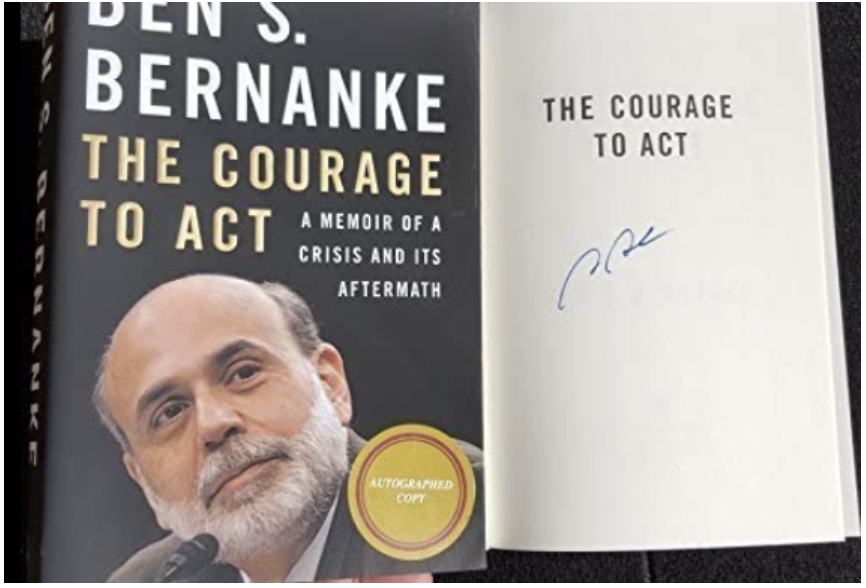 … or subsequently become the directors of Treasury Departments like this… 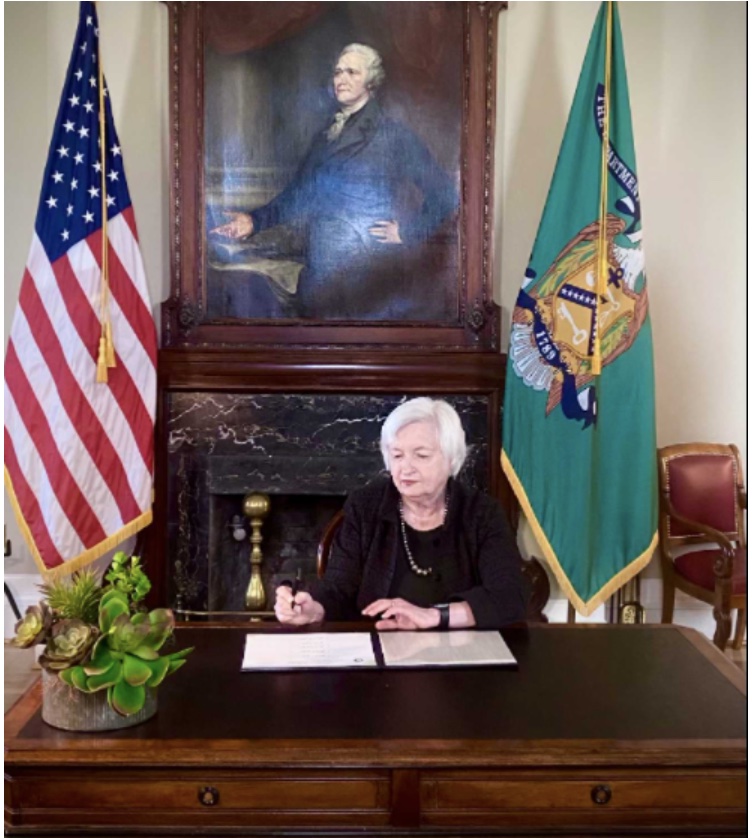 Mass Media, Mass (and Deliberate) Hysteria
Meanwhile, a feckless media owned by just a handful of corporate boards with direct ties to governments and Wall Street, and which more resemble the propaganda profiles of Joseph Goebbels and Pravda than the “truth to power” stewards of Woodward and Bernstein, continue to headline tweets from crypto front-runners like Musk or fear-porn mask mandates for children from a locked-down Sydney to a head-down New York with near zero risk of serious illness from a global flu whose case fatality rates are less than ½ of 1 percent.

But as every tyrannical, autocratic and corrupt regime knows perfectly well, when the truth is a threat, feed the masses fear, anger and lies.

This is history 101 for anyone who reads a book rather than tweet.

But rather than rage against the architects of so much distortion of honesty, math, science and social order, the media and policy makers distract the masses with bread, circus, fear and anger, stoking the fires of racial division and invisible death from above, pointing their woke fingers at everything from a rapidly defunded police force to the “selfishly unvaccinated” as modern “culture” cancels everything from Little House on the Prairie and Dr. Seuss to Robert E. Lee’s statue in Richmond, Virginia. 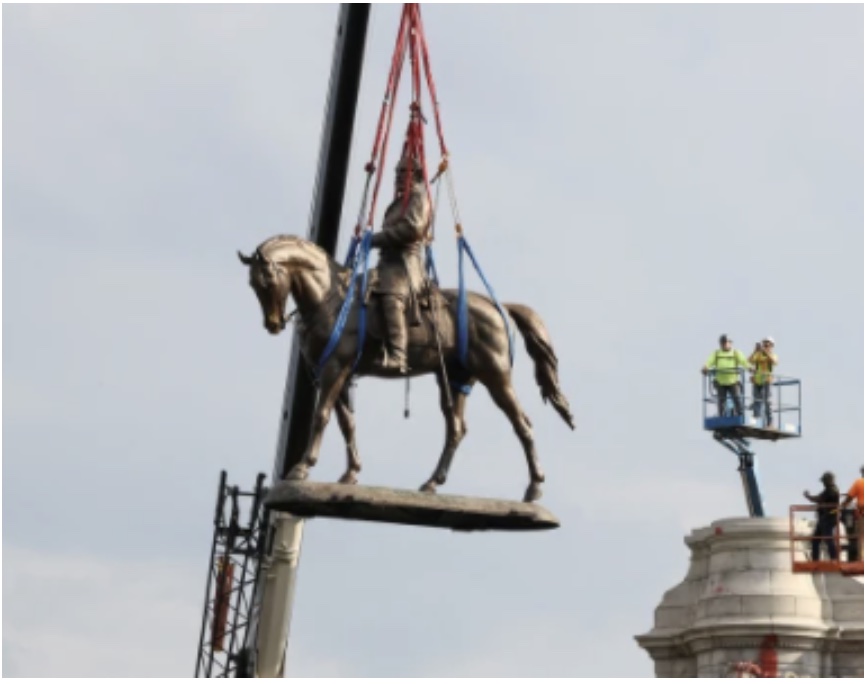 Sadly, however, if the broke and legitimately angry masses in the new feudalism passing for democracy or capitalism (the kind I studied in law school, for example) were informed rather than just frustrated and manipulated, then instead of blaming these angry faces… 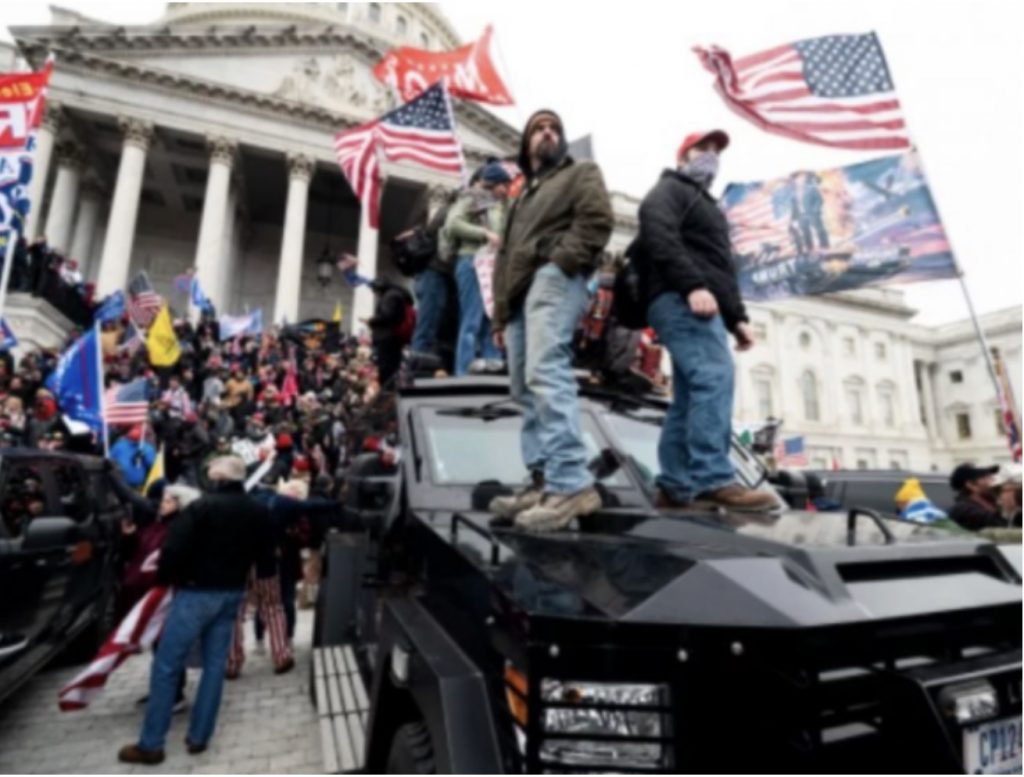 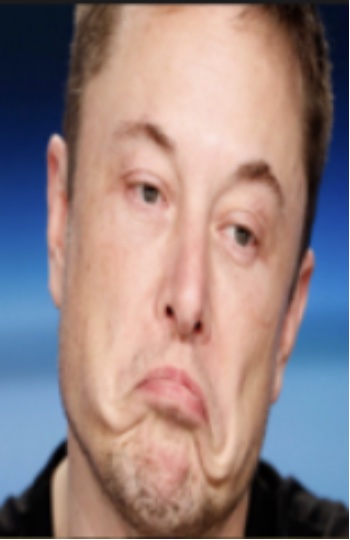 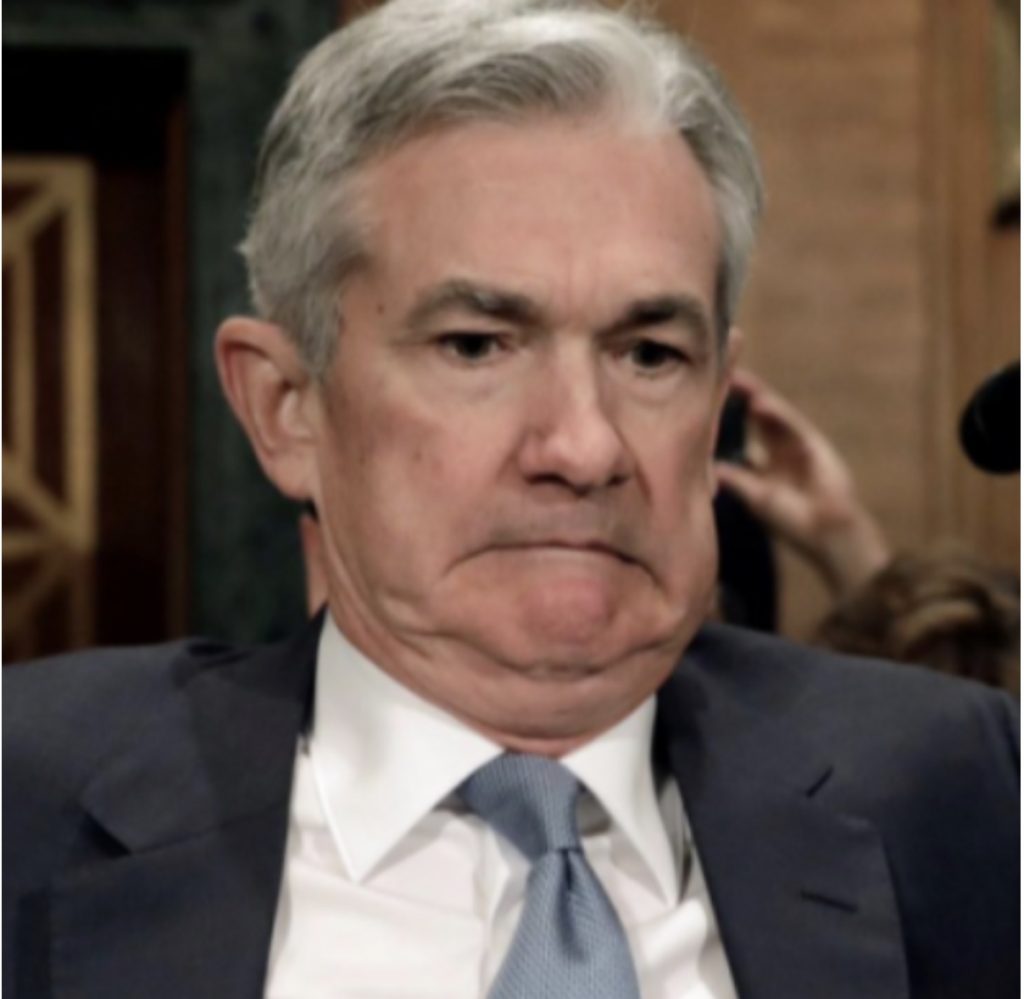 Returning to the Nonsense
Meanwhile, the pablum and doublespeak from our so-called experts continues to float like jetsam from the polluted currents flowing out of an increasingly discredited FOMC as the markets pretend to brace themselves for a potential “tapering” of the otherwise blatant money addiction (and counterfeiting) masquerading as policy support.

Unknown to many in those angry crowds gathering around Robert E. Lee or Dr Seuss, the Atlanta Fed just cut its q3 GDP forecast by 50% in matter of days. 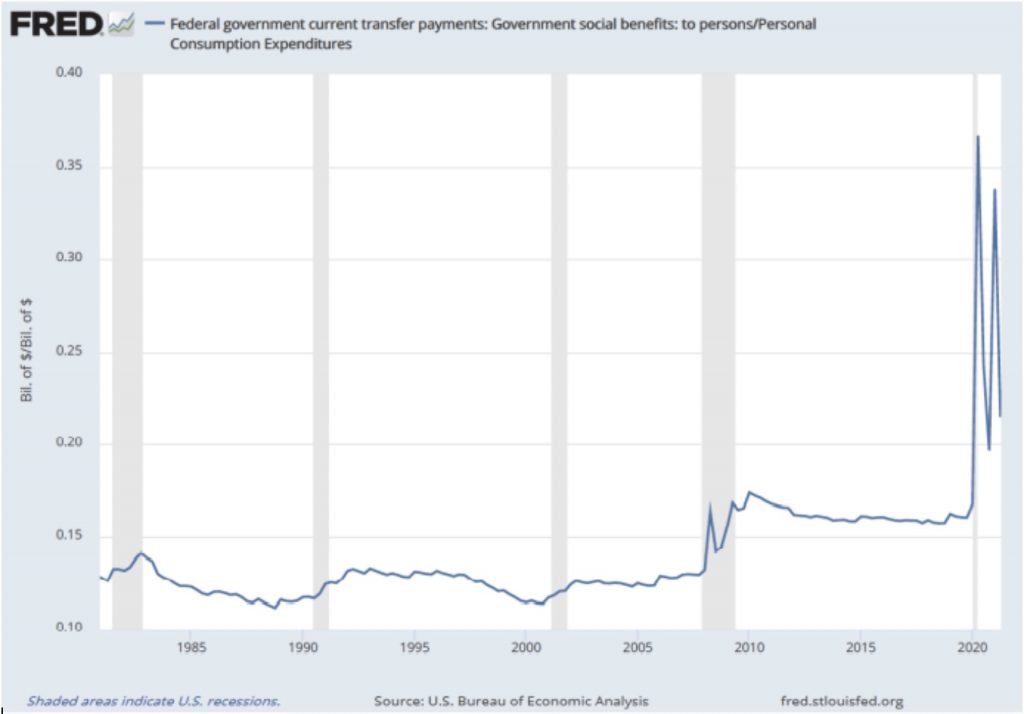 From where I sit in terms of both history and economics (at least until they too are “canceled” subject matters), falling GDP as indicated above effects all our lives far more than falling statues or controversial children’s books.

But as we’ve written so many times, the powers-that-be are clever little foxes, and even crashing GDP and skyrocketing debt, which are a time-proven cancers for society, can be a boon for their false narrative of governmental or central bank “guidance.”

Debt to GDP: The New Distortion
After all, one way to reduce the appalling 135% debt to GDP ratio in the U.S.  is to simply reduce the productivity component rather than debt component of the ratio, akin to telling a man with only one arm that his shirts will fit better if we remove the remaining arm.

A “lower” debt to GDP figure is just veiled anchoring for more QE “stimulus” and more ludicrous fiscal spending of money which governments don’t have but which a mouse-click at the Eccles Building, ECB or BoJ can produce in seconds.

In simple speak, this latest GDP “bad news” looks like an open as well as carefully planned piece of “good news” for a QE-addicted, fully Fed-supported and ultimately rigged to fail stock bubble.

The Pointless Taper Debate
As for Fed tapering, even the hawks at that same Atlanta Fed can’t keep their message or ethics straight for more than a week.

Nothing at all new there…

Another Fed Two-Step
Back in August (8/27), for example, Atlanta Fed President, Raphael Bostic, bravely declared: “Let’s start the taper and let’s do it quickly.”

But fast forward just a few days to September 2, and that same Fed President, like so many other fork-tongued masters of doublespeak within the FOMC, back peddled with fabulous elan, declaring instead that “we’re going to let the economy continue to run until we see signs of inflation.”

The amount of “duplicitous dumb” within this single sentence defies both belief and this report’s word count, but for simplicity’s sake, and despite “signs of inflation” literally everywhere, Bostic’s latest semantic two-step translates to this: Don’t expect a “taper” of the free money spigot anytime soon.

Besides, and as we wrote last week, even if a “taper” in Fed QE were to occur, such hawkish optics won’t stop the Fed from dumping ever-more dovish liquidity into the system via clever little tricks up the sleeves of its Reverse Repo Program.

In short, the Standing Repo Facility (or SRF) is just QE by another acronym, so please, don’t let the headlines or double-speak from above fool you.

Taper or no taper, the dollar in your wallet is about to drown under even more currency-killing liquidity from on high.

In short, nothing is real…This will link you directly to more fantastic articles from Egon von Greyerz and Matt Piepenburg CLICK HERE.

MAPLE GOLD DRILLS 28.5 METRES OF 8.8 G/T GOLD IN THE 531 ZONE AT THE DOUAY GOLD PROJECT
Maple Gold Mines has released additional results from the final three holes completed in the 531 zone as well as four regional exploration holes drilled during the 10,217-metre winter drill campaign at the Douay gold project in Quebec, Canada. Douay is held by a 50/50 joint venture (the “JV”) between the Company and Agnico Eagle Mines Limited.

DO-21-310 represents by far the best intercept drilled in the 531 Zone to date and the second-best intercept ever at Douay in terms of gold accumulation (grade x thickness).

Results are expected to increase the overall grade of the current mineral resource as well as locally upgrade Inferred resource blocks.

Fred Speidel, VP Exploration of Maple Gold, stated: “The results being released today continue a trend of very impressive results at the 531 Zone. Since 2019, our renewed drilling focus in this area has yielded some of the broadest higher-grade (&#62;2.5 g/t Au) intercepts on the entire property, which is both a significant validation of our evolving 3D model and targeting philosophy as well as an indication of the remaining discovery potential at Douay. The JV looks forward to further testing the continuity of the higher-grade mineralized trends and remaining open areas within the 531 Zone during our anticipated Q4 2021 and Q1 2022 drill programs.”

The Company has now reported 13 out of a total of 22 holes from the winter 2021 drill campaign. Additional assay results are expected to be released in the coming weeks once they are received and interpreted. Maple Gold Mines, symbol MGM in Canada and MGMLF in the US.