New World Disorder Escalating, Plus A Quick Note On Gold

The New World Disorder is escalating, plus a quick note on gold.

Quick Note On Gold
July 7 (King World News) – Peter Boockvar:  A quick mention on gold which has certainly gotten recently slammed with the further dollar strength, its 14 day Relative Strength Index yesterday got to the lowest level since August 16th, 2018, the day it made a notable low of around $1,160. It’s 7 day RSI yesterday got to just 10, the lowest since 2015. I remain bruised but still bullish. 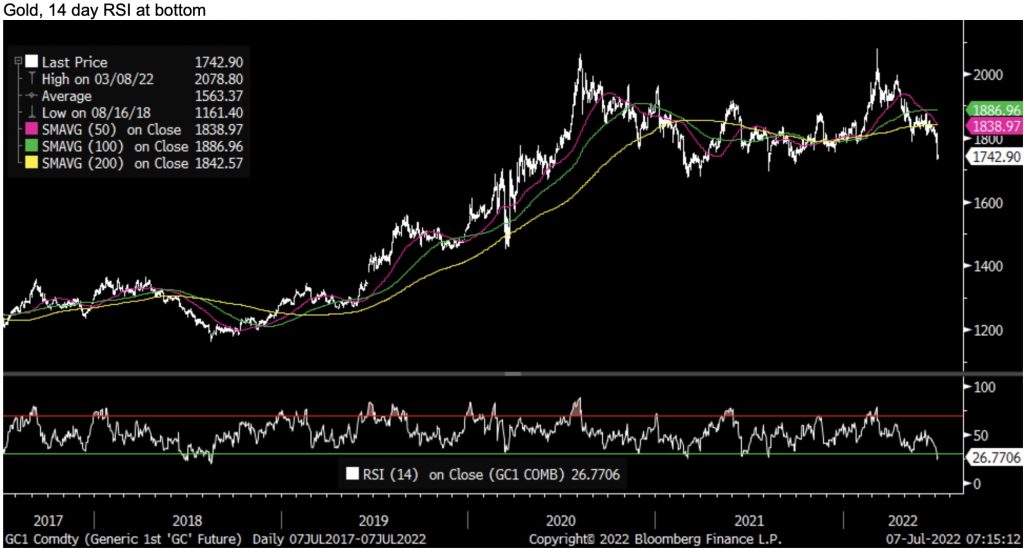 Earlier this year, traders were grabbing developing countries’ currencies such as the Brazilian real and the South African rand. Commodity prices were heading skyward and the two nations, like many developing economies, depend on exporting raw materials for their incomes.

By April, the rand was up 8 percent against the dollar and the real more than 17.

Since then, both have lost more than 9 percent against the buck.

Chile, one of the world’s chief copper producers, saw the value of its peso swell as copper prices set records, peaking at $10,724 per ton in May 2021. (See our Markets Overview, 11 May 2021). Recently, the Chilean peso crashed to an all-time low against the dollar.

The WSJ Dollar Index, which pits the greenback against a collection of 16 major currencies, shows the dollar up 2.5 percent in June and almost 12 percent over the previous 12 months.

Several factors are lifting the dollar.

First, investors now fear stagflation, the WSJ said, which is defined as a global economy that fails to grow as prices rise.

The world’s economies are rife with signs of a mounting slowdown, as we have documented for months in articles such as “Global Growth Slowdown: Get Ready” (18 Jan 2022) and our Economic Overview (5 Apr 2022). Investors are seeking safe shelter from teetering stock and bond markets and other stores of value that would wither in a troubled economy.

“The narrative has shifted since the end of May,” Steve Englander, head of strategy for North America at Standard Chartered, told the WSJ.

“The story of muddling through on growth and strong commodities demand has shifted to increasing fears of a slump.”

Such fears have grown as central bankers have warned that the prospects are growing that the world faces a recession.

And as we noted in this and recent Trends Journals, as a result, copper, oil, and soybeans are among a list of commodities that have backed off from recent price peaks.

Those clouds are especially dark for emerging economies.

First, a stronger dollar weighs on global trade. The dollar is the required currency for settling a range of international transactions. As the dollar becomes more valuable, other currencies weaken and countries that hold those currencies can buy fewer dollars to pay their bills.

That can negate the benefits emerging economies might see from higher commodity prices.

Second, a strong dollar makes many imports more expensive for countries unable to meet their needs for goods domestically, adding fuel to inflation in those nations.

Third, a strong dollar can hobble China’s economy, in part by luring investors away from investments denominated in yuan or renminbi, China’s two currencies, “and what’s bad for that country is generally unhelpful for emerging economies, given their linkages to Chinese supply chains and commodities demand,” Financial Times analyst David Lubin wrote in a 29 June essay.

“The strength of the dollar recently reflects a worsening external environment,” analyst Nafez Zouk at Aviva Investors said to the WSJ.

Complicating things even more, the countries are raising their internal interest rates to battle inflation.

Mexico’s central bank boosted its key rate for the ninth consecutive time to 7.75 percent. Brazil’s bank has lifted its base rate from 2 percent early in 2021 to 13.25 percent now.

TREND FORECAST:
Our comment in “Strong Dollar Threatens Developing Nations” (27 Jul 2021) is even more apt now that the world is facing Dragflation, with prices continuing to rise as economic productivity falls.

Dragflation, rising interest rates, and a strong dollar will write yet another chapter in developing nations’ chronic debt crisis, consigning millions of people to poverty and sparking political turmoil across the southern half of the globe.

However, in this new chapter, developed nations already are struggling to manage their massive new COVID-related debts, choking on inflation, and watching their own economies slow.

They will have less inclination, or ability, to bail out failing nations south of the Equator.

The exception is China, which will use the crisis to continue to distribute cash to countries it sees as strategically advantageous to its trade and geopolitical ambitions.

As a result, China will capitalize on the crisis to expand its global influence and secure future supplies of key minerals and other materials needed to maintain its manufacturing empire and develop its consumer economy.

However, the reality will be Dragflation, our Top 2022 Trend in which economies contract while prices keep climbing. Much of the world has already sunk to this state, including the U.S., which is about to book a second consecutive quarter of economic contraction.

As Dragflation continues to spread around the world, social unrest will sharpen, political upheaval will increase, and people will take to the streets, especially in emerging nations, as we predicted in our Top Trend of the New World Disorder.