Multi-billionaire Hugo Salinas Price just said that the price of gold is going to trade multiples higher than what is being quoted today.

World’s Monetary Reserves and the End of an Era
April 30 (King World News) – Multi-billionaire Hugo Salinas Price: We had been observing the evolution of the total of Central Bank Monetary Reserves for several years, and noted a peak on August 2, 2014, when these Reserves reached a maximum of the equivalent of $12.032 Trillion dollars, according to Bloomberg.

As of April, 2019, a review of Central Bank Monetary Reserves, according to Bloomberg, yields some interesting information. 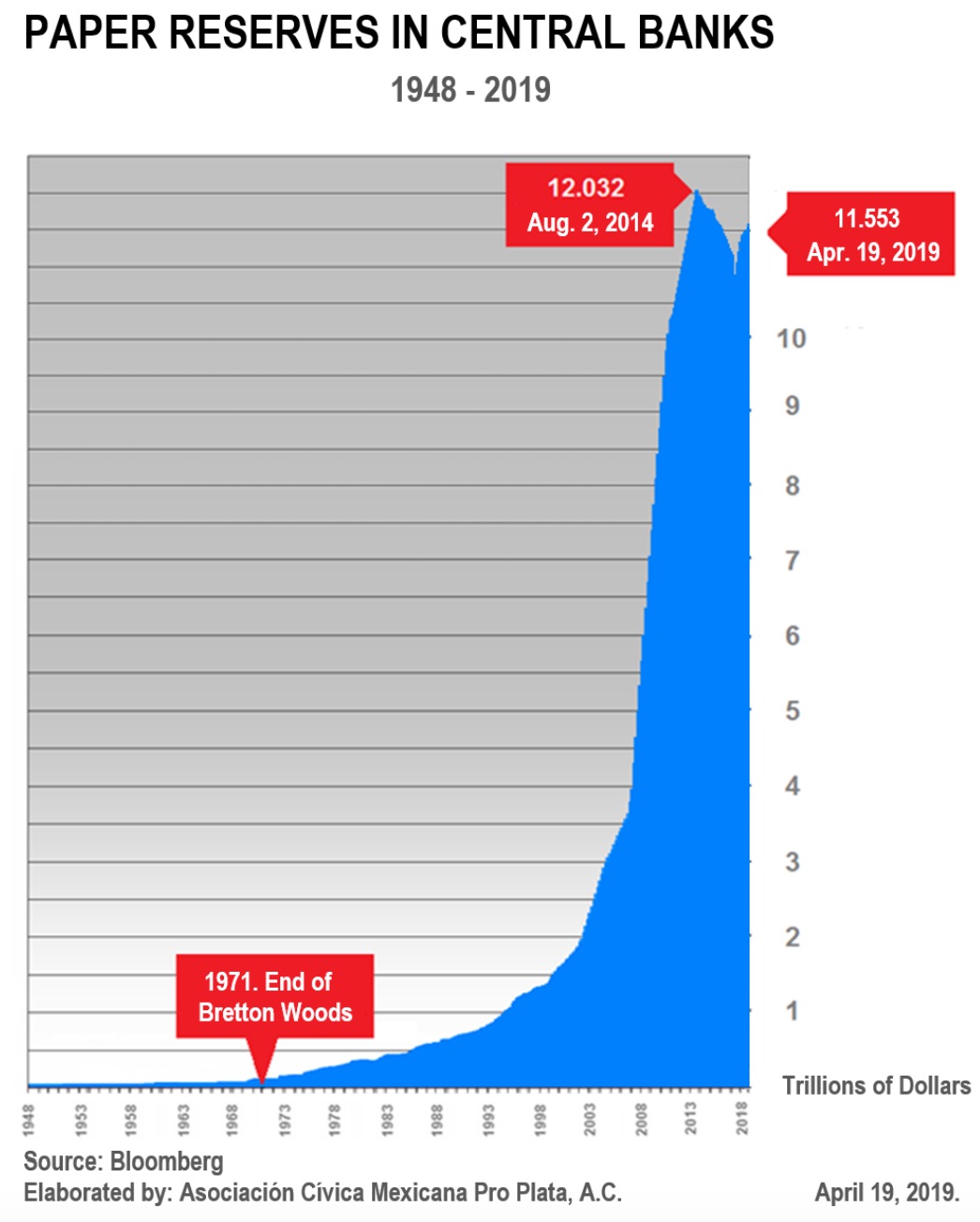 The prime cause of the increase in CB Monetary Reserves has been, since 1971, the trade deficit of the USA; in 1971, gold ceased to be calculated as the component of monetary reserves. Since 1971, dollars flow out of the US, in payment of imports not covered by sufficient exports, to balance the trade account.

Oddly enough, though the total dollar amount of US trade deficits, from August 2014 to February 2019 amounted to an astonishing $3.603 Trillion US Dollars (according to the US Census Bureau) paid out by the US, in payment of imports not covered by income from exports, not only did the total of Monetary Reserves held by Central Banks not increase by one penny, but they actually declined by $479 Billion!

The explosive growth of CB Monetary Reserves that began in 1971 concluded in 2014, after which, not even the weight of a $3.603 Trillion US Trade Deficit caused any increase at all in CB Monetary Reserves, which actually declined (!) by $479 Billion dollars as of April 19, 2019…

I submit that a change of this enormous magnitude cannot possibly be the result of “market forces”. I have to attribute this great change, to deliberate decisions on the part of the great exporting powers of the world, to stem the growth of their CB Monetary Reserves.

In 2014, the great exporting powers of the world must have come to the conclusion that the US, as a purchaser, was in very serious and permanent trouble: that its Trade Deficits would have to grow year by year, and that the Exporting Countries had to put an end to the increasing growth of their Monetary Reserves (made up principally of Dollars earned through exports), because increases in their Monetary Reserves had the effect of increasing money in circulation: in other words, more CB Dollar Monetary Reserves meant importing monetary inflation from the US.

The US did pay out the gigantic sum of $3.603 Trillion dollars, in the period from 2014 to 2019. If these dollars did not show up, at least in part, as Monetary Reserves of CBs, where are they?

Paper money can travel anywhere, but all digital dollars, which are bank deposits, only “live” in the US. The $3.603 Trillion dollars paid out by the US, to cover the costs of imports not covered by exports, did not physically travel to their owners in foreign countries. They are still in the US, in the form of dollar balances in favor of foreigners, both individuals and corporations. So those $3.603 Trillion dollars are in the US banking system, in accounts belonging to foreigners, but not including foreign Central Banks.

The decision, on the part of the CB’s of the exporting countries, to put an end to the increase in their Monetary Reserves, made up of irredeemable digits representing mainly US Dollars, as well as other digits representing less-important irredeemable currencies, valid for Reserve purposes, has in effect put an end to the US-dominated system established upon the demise of “Bretton Woods”, in 1971.

Trade goes on, and dollars are paid to cover export deficits, but the CBs of the exporting countries of the world are not holding on to dollars any longer: the total of Monetary Reserves has been frozen since 2014, and has declined since then.

The CBs of the exporting countries, as of April 2014, no longer regard the dollar as a desirable investment, and this marks the end of an Era.

The CBs of the exporting countries pass on their dollars to subsidiary government entities, who purchase gold. The existence of the subsidiaries is not reflected on the CB Balance Sheets.

In effect, the CBs of the exporting countries regard the dollar as an “IOU” of a business that produces an endless amount of “IOUs”. The creditor countries are looking to cash-in these “IOUs” while they still retain some value, by buying-up natural resources in “developing countries”.

Therefore, it would seem likely to see the value of the dollar enter into a secular decline, as CBs increasingly dishoard dollars and go for gold as the desirable factor in their Reserves.

The US Government thought that by manipulating the price of gold to keep it low, and driving it down when it has risen a bit, it would dissuade the world from investing in gold. It has not realized that it has been dealing not with simple and ignorant private investors, but with intelligent individuals, who can easily see through the charade mounted by US authorities. The low price of gold has been an excellent incentive to investment on the part of the Russians, the Chinese and other Orientals…

There is a constant flow of gold from West to East, as China, and probably other nations as well, want to divest themselves of dollars and obtain gold, which is a physical asset independent of any political entity.

The Chinese CB has distributed its claims on dollar balances, earned through export trade, to various entities, who will be doing whatever they can, to obtain tangible assets around the world with their dollar balances. Perhaps the Chinese are colonizing Central Africa and buying up its agricultural land and mineral deposits, with US dollars that they earned on their exports to the US? Quite ironic, that the US should advance the interests of China in this way!

The Russian Central Bank has reduced its holdings of dollars (which all consist, as we have just said, of dollar balances in US Banks) to a bare minimum, and is constantly buying gold, to be held in Russia by Russians. In a significant move, Russia has recently eliminated the Value Added Tax (VAT) on gold purchases by the Russian public.

(No more “London is the place to keep your gold” for Russia!)

China is not only doing the same, but encouraging its population to own physical gold.

* In my opinion, both Russia and China are substantially under-reporting their gold holdings, just as any Power under-reports its military assets.

* The growth of World CB Monetary Reserves ceased in 2014, and the trend since then is not growth but contraction. The US Dollar is losing its standing as a Reserve Currency.

* CB gold reserves are growing in Russia and China (and quietly, in other countries as well).

a) The heyday of the Dollar is over.

b) The world is moving toward currencies redeemable for stated fixed amounts of gold, which will be, in the future, the determining characteristic of the various breeds of money.

c) Human nature being what it is, at some point a rush into gold may take place, and cause the price of gold to go into “backwardation”, i.e. a condition where no amount of promises of future delivery will influence the rising price of gold, until it reaches multiples of its present, artificially low price in dollars.