Today Sears announcing the closure of another 150 stores, but this is what could really spell trouble…

From Art Cashin:  On this day (+1) in 1775, at the second Virginia Convention, in the city of Richmond, a firebrand delegate rose and cut through the smoke of compromise. His speech was unique. As any public speaker will tell you, a good speech is one where the audience stays awake. A great speech is one that changes the mind of the audience. But best of all is a speech that outlives the event and maybe even outlives the speaker.

Well, this was some speech. The speaker’s name was Patrick Henry. And the awesome construction, pacing and ringing of his speech was so great that it ranks in the English language as one of the five best (Shakespeare’s “Marc Antony’s eulogy of Caesar”; the Gettysburg Address and, of course, some great Winston Churchill edging it out). But every schoolboy knows the climax of this great speech – – “….Our brethren are already in the field. Why stand we here idle? What is it that gentlemen wish? What would they have? Is life so dear….or peace so sweet as to be purchased at the price of chains and slavery? Forbid it, Almighty God! I know not what course others may take, but as for me, give me Liberty or give me Death!”

To mark the date stop by the House of Burgess Tavern and order some “Liberty” Ale. But, if they don’t have Liberty on tap, try not to be too picky.

Wall Street stocks were anything but picky yesterday as political and lending issues combined to crush the 110 day streak of trading days without a one percent fall.

Worries On Trump Agenda And Concern About Car Loans Help Drive Stocks Lower – U.S. stocks opened with a mild rally that instantly evaporated and then reversed sharply to the downside.

The TV pundits at first seemed baffled by the move and then began flailing about to find the “trigger” of the “surprise” selloff.

The media confusion lingered, which prompted me to send this midday note to some friends:

Market selloff. Slightly delayed reaction to Ally Bank comment that prices of used cars are vulnerable. That cut legs out from the likes of Avis and several regional banks. Now add in crude breaking $48. Also second thoughts on votes for healthcare Thursday (backs up agenda).

So also from comments that reform bill does not work without the border tax.

The Ally Bank connection was missed by many pundits but I think they were causative and important.

For decades, auto loans tended to be about three years in duration. With the recession, wage growth began to stagnate and to keep the business, banks began to “help” car buyers stretch their limited dollars by increasing duration from three to four, then to five and even six years. Thus, you still had to pay back the $5000 but in many smaller payments.

While it’s not the size of the mortgage problem, it is a huge, huge pile of doubtful debt. So that’s why the Ally call set off alarms, aided and abetted by recent reports of growing auto loan delinquencies.

As noted that hit regional banks, many of whom have auto loan portfolios. Other areas were (as noted), stocks like Avis, Auto Nation and the auto majors. The loan concern spilled into a flight to safety.

Concerns about the Trump agenda stalling were also a key part. A friend was kind enough to pass along some comment from the ever sharp-eyed Greg Valliere yesterday.

1. THE MOST PRESSING CONCERN involves President Trump’s agenda — which is why Thursday’s House vote on an Obamacare replacement is crucial. Despite Trump’s personal involvement in the issue, he still appears to be a vote or two short this morning. Make no mistake: a defeat in Thursday’s vote would send a clear signal that the rest of Trump’s agenda — taxes, the budget, infrastructure, etc. — is in trouble.

THE PRESIDENT TRAVELS TO CAPITOL HILL today to personally plea for the bill, and we suspect this is part of an orchestrated process that will give him a victory on Thursday, showing that he still has some clout after yesterday’s disastrous Comey hearing. Then comes the really heavy lifting in the Senate, where the only goal is to get any bill passed, which would set up a back-and-forth with a House-Senate conference committee. That process could drag into the summer.

2. THE ONLY OTHER THING THAT COULD SHATTER THE STOCK MARKET’S COMPLACENCY would be a geopolitical event, which can’t be ruled out as the U.S. prepares major new sanctions against North Korea, according to a Reuters exclusive this morning. New sanctions could provoke North Korea’s unstable leadership.

Interestingly, by campaigning for the bill actively on the Hill, the President has sharply increased his stake in its passage. Had he been a bit more passive, he could have blamed any failure on Ryan. Now he’s in it up to his hips.

Another sector that got crushed was the retail area. My friend, Peter Boockvar at the Lindsay Group nailed that issue (as usual):

Yesterday though was more than just healthcare vote worries. The retailer etf, XRT, closed at the lowest level since June 2016 on worries about the border adjustment tax that Kevin Brady yesterday repeated will definitely be part of the House tax reform bill. There is no question this sector was secularly challenged anyway but the industry is still the largest private sector employer in the country.

When you add in the crude weakness that I mentioned in the email, you have more than enough issues to account for the 1% fall.

Dave Lutz, another market veteran, down at Jones Trading thinks the selling may have been exacerbated a bit by robo-trading – algorithms and the machine. There were some credible signs of that.

At any rate, declines swamped advances 4 to 1 and only one of the 11 S&P sectors closed in plus territory (the utilities).

In Europe, stocks are moderately lower, catching-up to the New York afternoon selling that they had missed by closing at noon.

Crude continues weak and bears watching. If it breaks below $47, we may not have enough stretchers and bandages…

King World News note: Commercial hedgers are still near historic record all-time short positions in crude oil, even though they have been covering into the latest decline (see chart below). 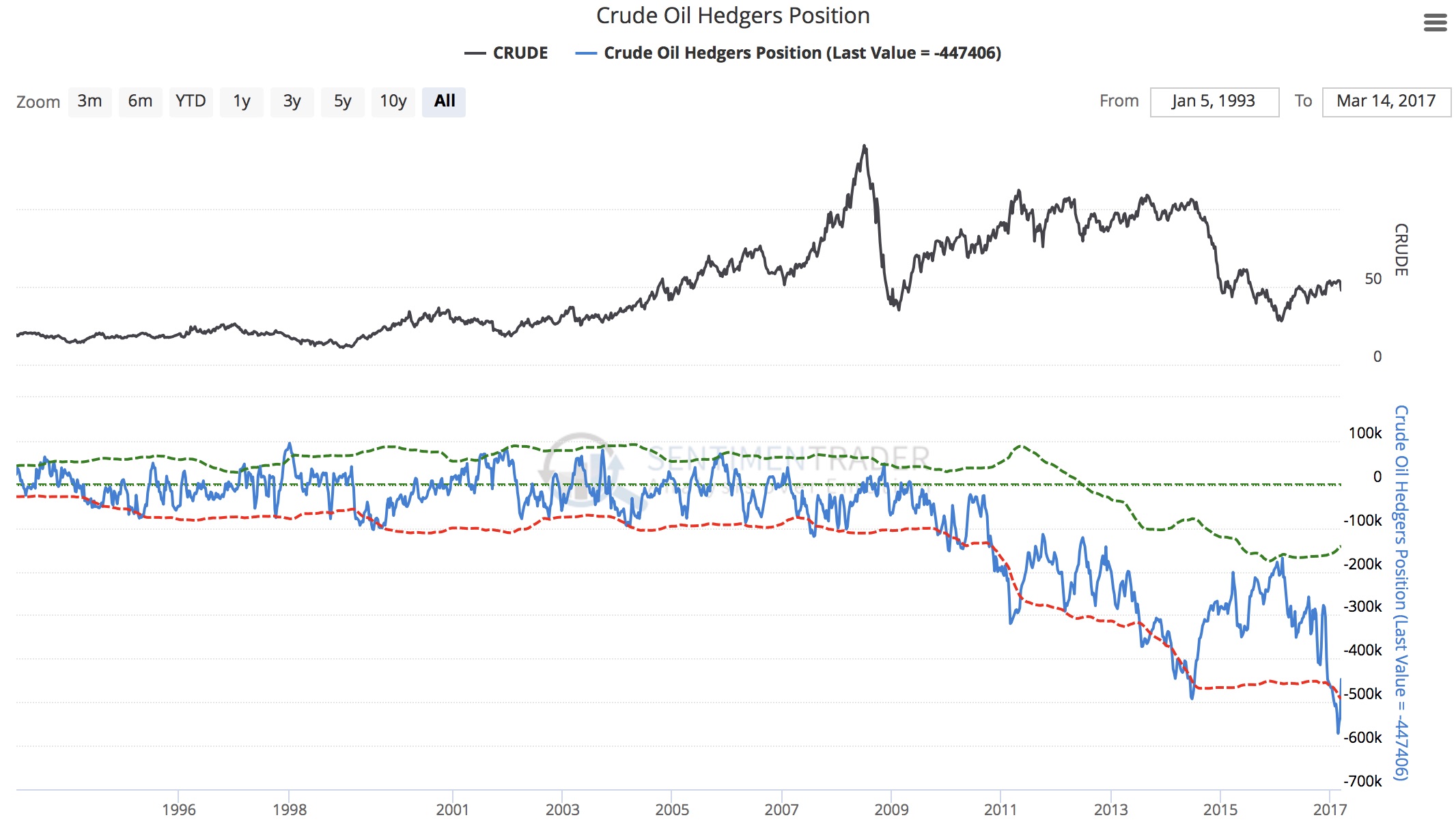 Art Cashin continues:  Consensus – Politics is again center stage. Anti-Trump folks continue to try to delegitimize him – saying none of his agenda should be moved until he is “cleared” of charges that he and/or his campaign worked “with” the Russians. They try that to hold up Gorsuch.