As we kickoff another week of trading in the middle of May, more out of control inflation, plus highest in 60 year recorded history! 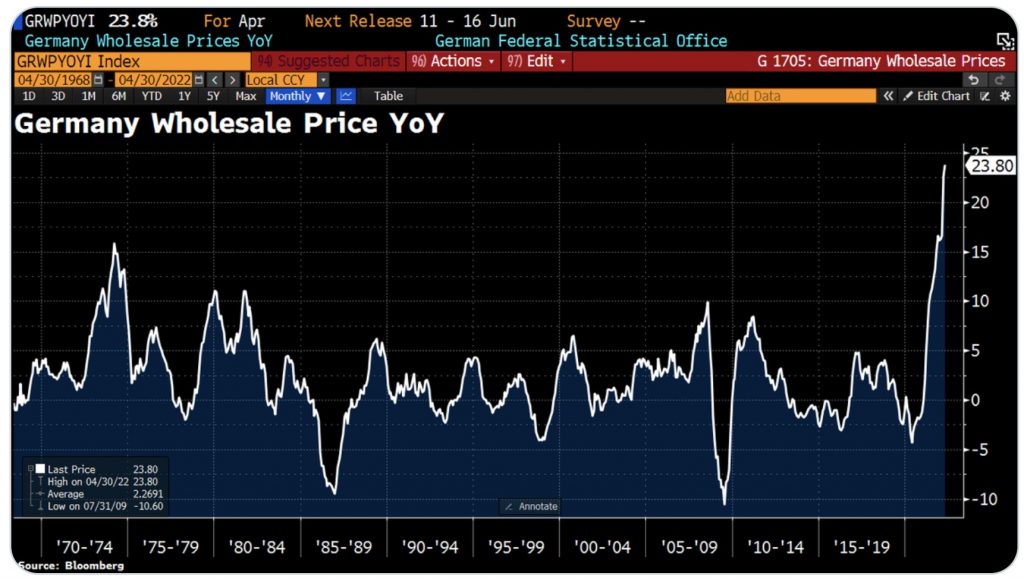 Market Selloff
Peter Boockvar:  Outside of the covid market plunge, every notable stock market correction of between 10-20% since 2010 (and many times before then but let’s stick to this time frame) coincided with either the end of QE, the tapering of it, the shrinking of it and rate hikes. That of course is now happening again but the difference this time is inflation as the response to those corrections came the sugar daddy called the Federal Reserve and this time it doesn’t.

After the nearly 20% market decline that followed when QE1 ended, soon came the Bernanke (The true King of Easy Money who really addicted us all after Greenspan started the process) Jackson Hole speech in August 2010 that set the stage for QE2. The almost 20% sell off after QE2 ended triggered Operation Twist that began in September 2011 and ran through June 2012. The selloff into June 2012 triggered the beginning soon after of QE3. When know the taper tantrum freaked out the Fed which led them to really stretch out its taper but there was no balance sheet shrinkage then…

In anticipation of the first rate hike in 2015 resulted in no stock market gains that year and after finally raising rates in December 2015, the Fed never followed through with the expected 3 hikes in 2016 and instead waited until after the election to do so only once. After the correction in January/February 2016 after the first rate hike, the pause drove a 10% 2016 rally and expectations of a corporate tax cut in 2017 led to that year’s 19.4% rally. We know what happened in 2018 as the rate hikes resumed and we had the vol blowup in January/February and double tightening in Q4 2018 that was then followed by another backing off by the Fed in tightening. This was then followed by quite the drunken covid market party with a trip back to zero in rates and a rocket ship higher in the Fed balance sheet that started to cool in the summer of 2020 as the Fed talked more about its thinking about tapering the most aggressive QE they’ve done.

Bottom line, the Fed stoked the rallies, then snuffed them out and then lit the fire for another thereafter. Of course, earnings growth is what really drives stock prices in its trajectory but the degree of the line higher in equity market moves tilts too on the P/E multiple investors are willing to pay and that is what the Fed influences. When easing is on, that multiple is certainly higher and vice versa. So now we have the backdrop of 40 yr highs in inflation that the Fed is now finally addressing which also means there is no room for saving the markets, for now. And why the P/E multiple will continue to compress. As it overshot on the upside, it will on the downside and I’ll throw out 15x as to where it might settle out at. Throw in your earnings estimates for the coming years and that is where the S&P 500 might end up before all is said and done I’ll guess.

That said, I’ll say again, time horizon wins in a bear market and tremendous values are always created for those with dry powder. And value stocks will continue to outperform overvalued ones.

Moving on. Wheat prices are jumping 5.2% to above $12 a bushel after India said they will limit exports. It’s at a 2 month high. 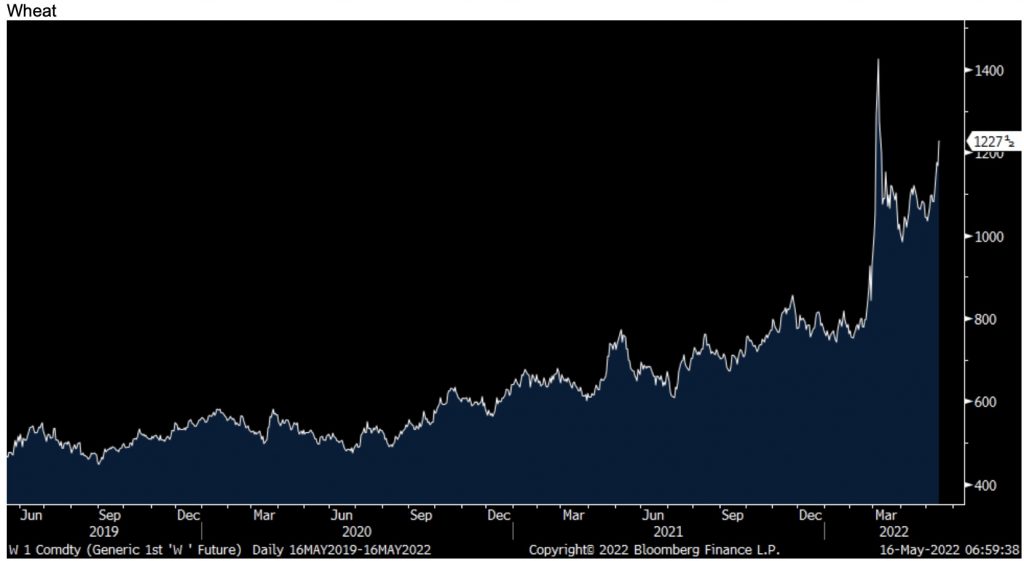 This comes after Friday’s record high close in the CRB food stuff index. 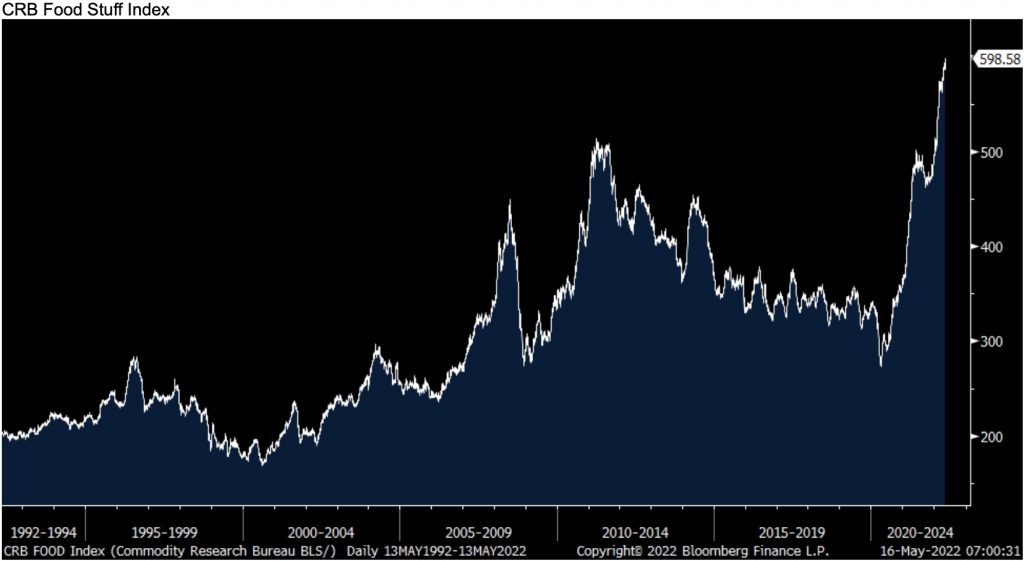 China Opening In Phases
Not surprising but highlighting the self inflicted pain on its economy, China’s April economic stats were pretty bad. Retail sales fell 11.1% y/o/y, almost double the estimate of down 6.6% and a contraction for a 2nd month. Industrial production also went negative with a decline of 2.9% y/o/y vs the estimate of a slight gain of .5%. Fixed asset investment ytd was about as expected, triggered by all the infrastructure spending. The PBOC did not change broad rates in response but there was a tweak lower in mortgage rates for first time buyers. There was also a plan to reopen Shanghai but what happens when there are more flare ups? The Vice Mayor of Shanghai said shopping malls, department stores, supermarkets and convenience stores will all start reopening in phases. Expect some empty US shelves in the months to come after existing inventory of imported China goods are sold. Chinese stocks were mixed overnight while the yuan is lower again.

After being so successful since 2014 when interest rates went negative in keeping the euro depressed vs the US dollar, maybe enough is enough according to the Governor of the Bank of France Francois Villeroy. He said today

“Let me stress this: we will carefully monitor developments in the effective exchange rate, as a significant driver of imported inflation. A euro that is too weak would go against our price stability objective.” 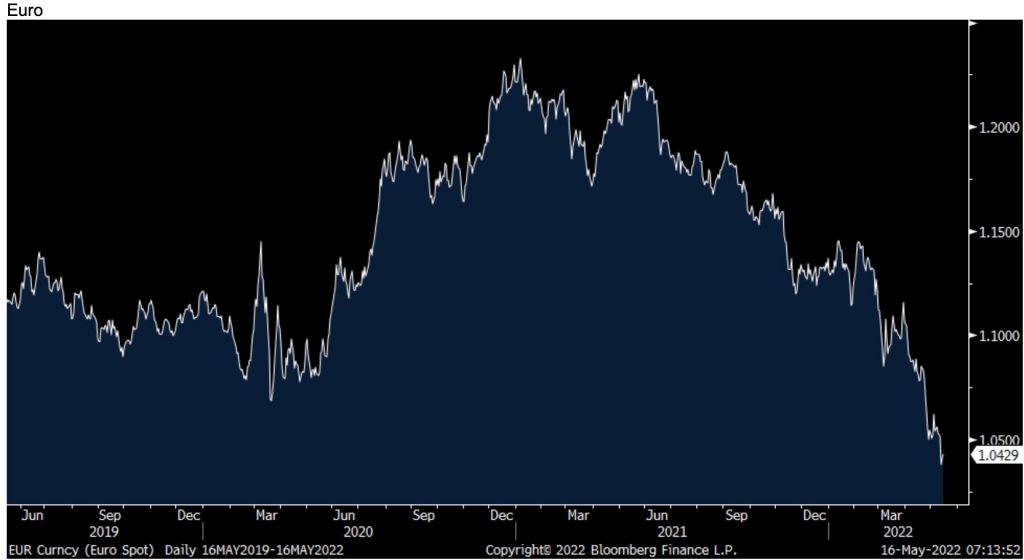 QE is expected to end next month and a rate hike will follow in July. They will likely get to at least zero by year end and we’ll see what tolerance the ECB has above that. Amazing that all we’re talking about here is when they will get rates back to zero as inflation flares at above 7%. And price stability is the only ECB mandate but we know that has shifted to just financing European budget deficits and debts. The euro is up slightly on the Villeroy comments but inflation breakevens are higher as are bond yields. 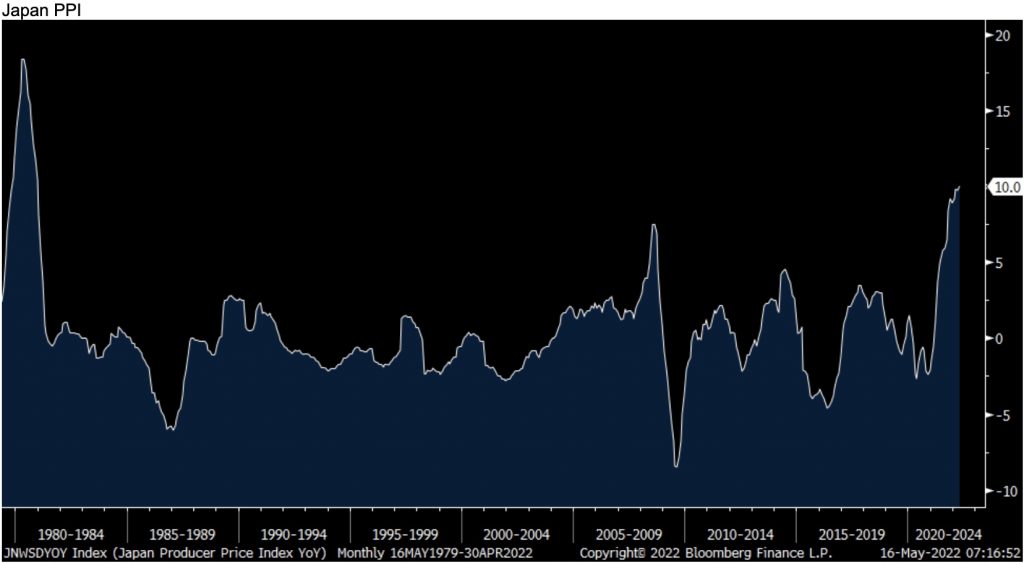 Energy certainly was a main driver but so were many other things. Either prices get passed on to the end consumer, we saw much faster productivity and/or other cost cuts or Japan is facing a major profit margin squeeze. There wasn’t much of a market response as the 10 yr inflation breakeven was unchanged as was the 10 yr JGB yield. We remain bullish on Japanese stocks notwithstanding potential profit pressure.

ALSO RELEASED:  Greyerz – We Are In The Early Stages Of An Inflationary Depression CLICK HERE. 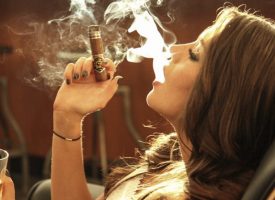 Pipeline Inflation Remains Hot! Plus A Surprise For Gold Investors