Today Michael Oliver, the man who is well known for his deadly accurate forecasts on stocks, bonds, and major markets, communicated to King World News that the gold and silver markets may be ready for a major upside reversal.

Silver Rout But No Gold Rout
April 28 (King World News) – Michael Oliver:  In our weekend report we used a somewhat cautionary tone and noted that while silver was threatening a level that we preferred not to see closed below on a weekly basis (that being $23.90), gold had a different temper and was not close to any comparable level of breakage (speaking of quarterly momentum in both cases, not annual momentum which is a fair distance below these markets and not being threatened). 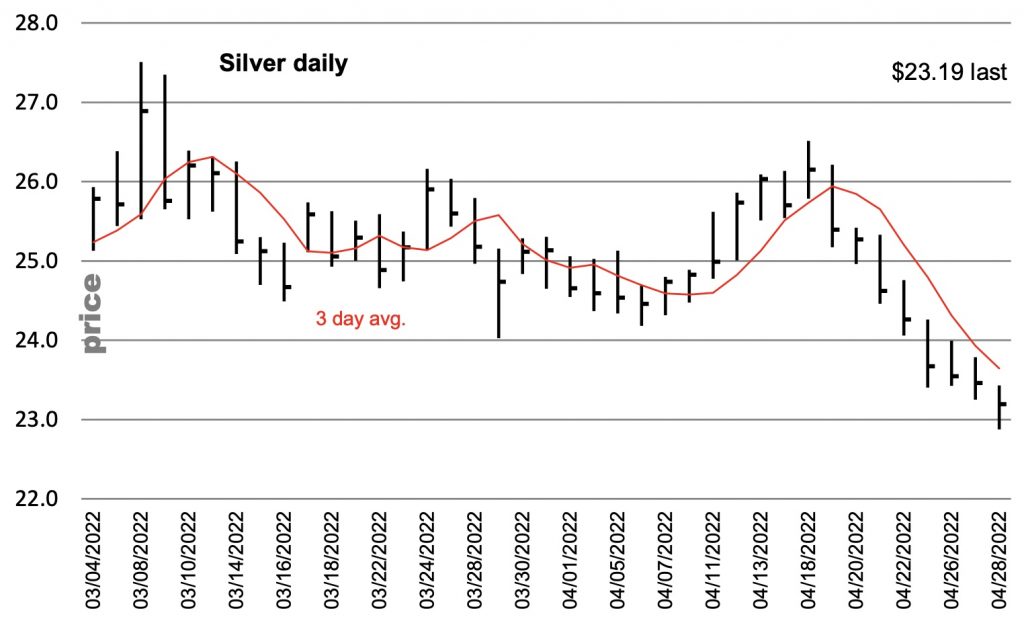 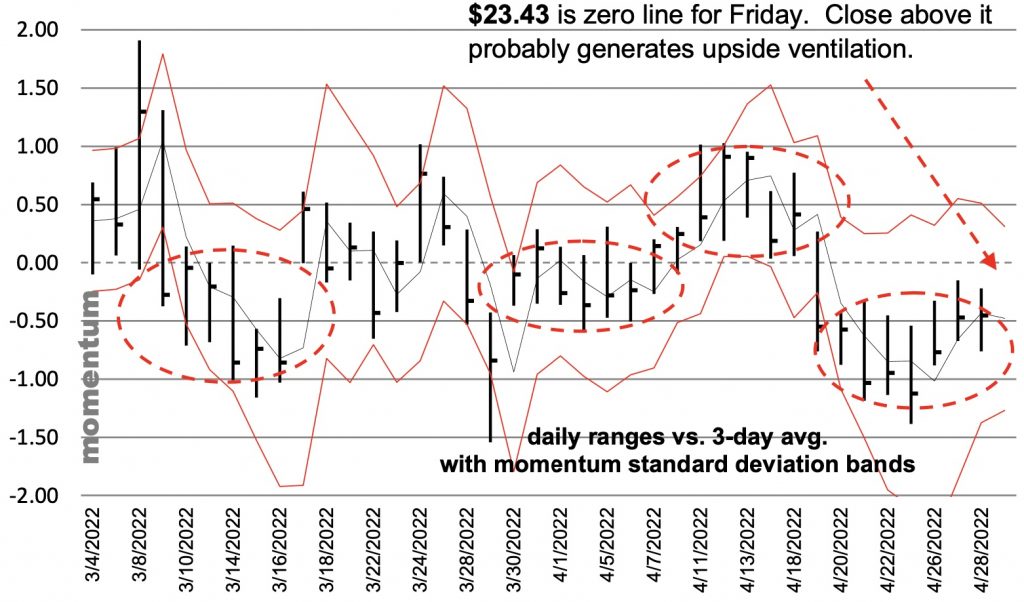 We think the silver drop probably needs to be followed by a comparable drop in the dominant market (gold); otherwise there’s something wrong with what silver is trying to tell people via its price action. It’s screaming global deflation, commodity collapse, etc., yet gold and the Bloomberg Commodity Index are definitely not screaming such a story.

Here we update short-term charts of silver and gold. Daily momentum has created a clump of ink all submerged below the zero line/3-day avg. Similar clumps of ink have been generated on both sides of that zero line over the past few months and each tends to produce a move the other way—even if short term—once that clump of ink is either broken out above or below. 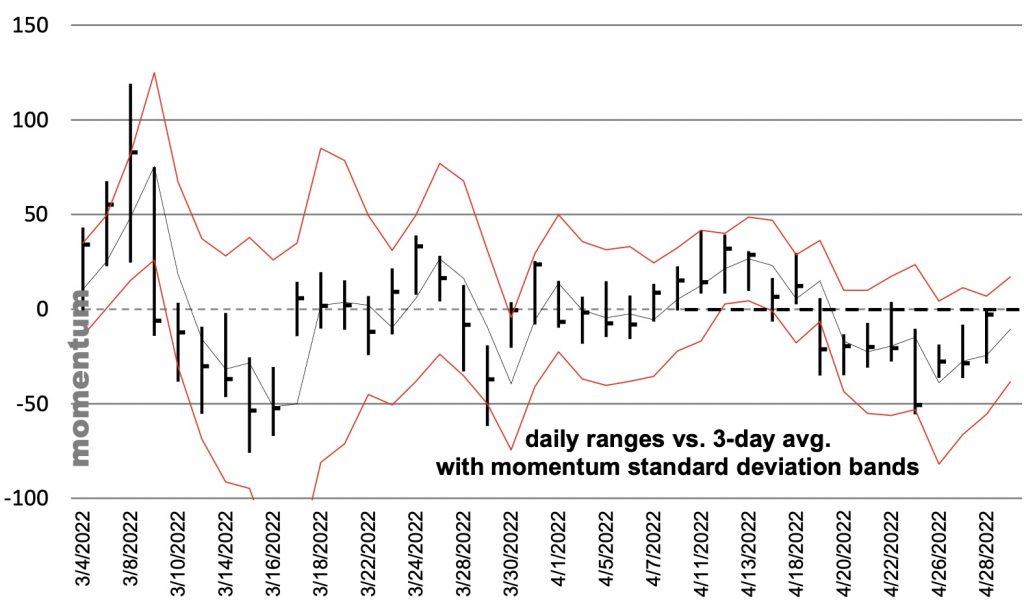 And frankly we don’t think the silver bears can withstand a dollar or more of a move back to the upside, as that will indicate that this “collapse” (their hope) is not a collapse, but just another drop that does not gain traction.

Also watch gold. We like what it just did in this particular selloff (the third redundant/overlapping selloff since its March 8th high). Especially the last two days.

The daily price drop was large after the March 8th high. Within six trading days gold dropped into the $1890s. 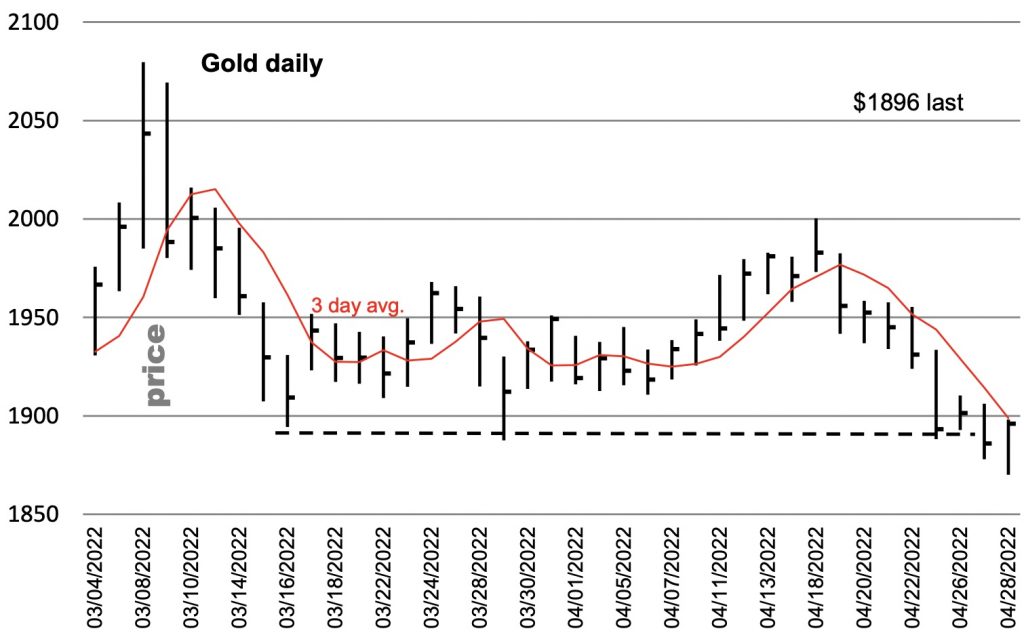 Then that second rally carried up to just below $2000. It has since been followed by a selloff low that took out that prior pair of lows by enough to trigger any major sell stops. Even those keeping a $20 x 3 point-and-figure chart saw that set of lows taken out in this drop—reaching $1880 (actually just above $1870). Today’s close puts gold where it was trading six days after that March 8th high! Where’s the sustained downside. Six weeks spent?!

If gold (June future) settles tomorrow above $1888.20 (the 3-day avg. is dropping daily, and for tomorrow it’s below today’s close), then daily/short-term momentum will close over the zero line, ending a likely basing action by momentum that has involved eight days submerged below the 3-day avg./zero line.

The zero line has been a pivotal structure going back to early April.

Again, the significance of such an upturn? Obviously it says that while gold had a chance to jump off the cliff, as so many expected, it instead got just low enough to blow out price chart sell stops—so far with no follow-through. (Momentum was not making new lows like price when that occurred.) A daily upturn says that the bears had their chance…to subscribe to Michael Oliver’s MSA Annual Research at a special KWN discounted rate CLICK HERE. Look at these testimonials: