A more complete report is available to MSA subscribers, but here are a few key portions of today’s major update on the gold market: 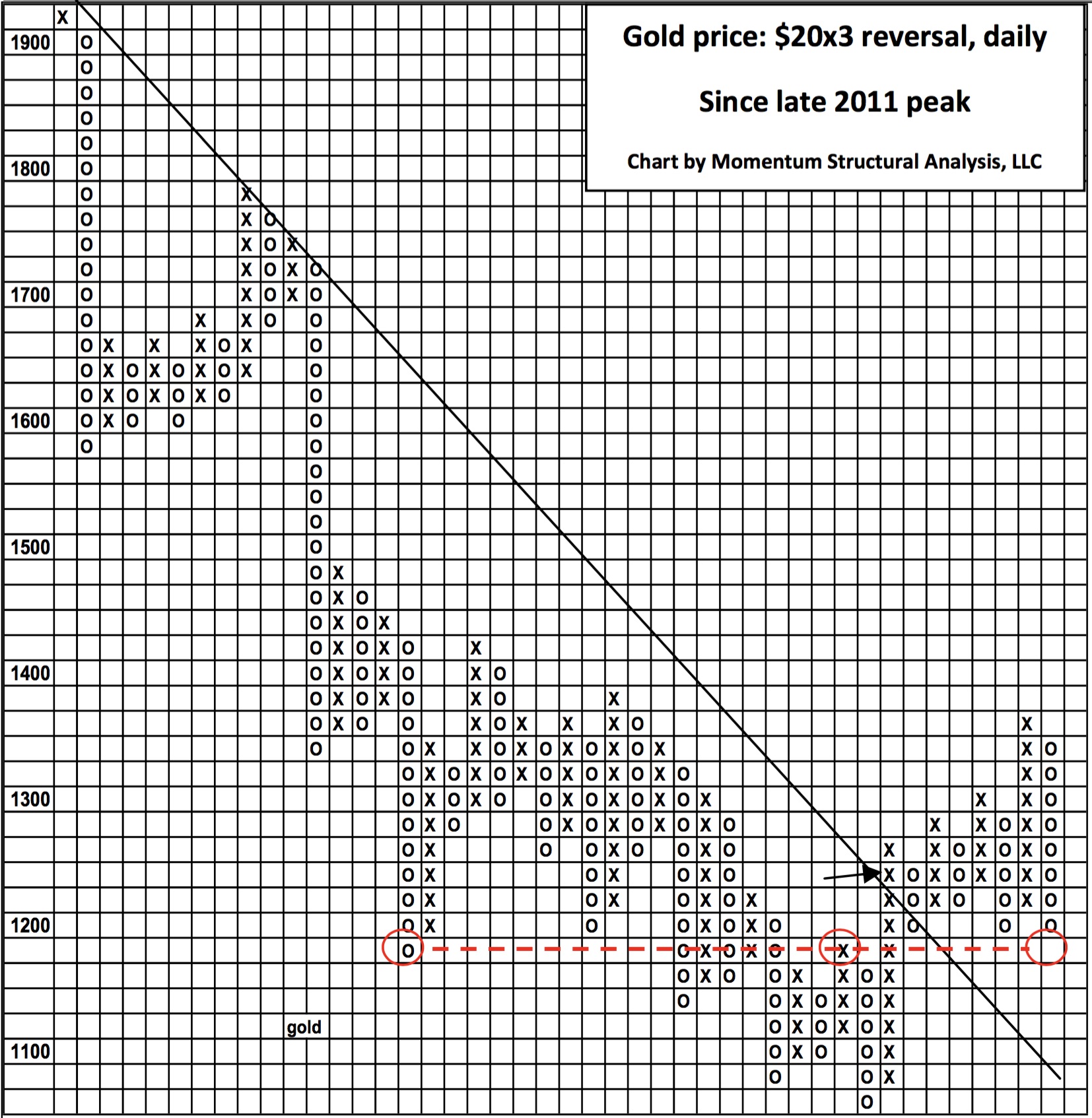 Around $1240 in February of this year (black arrow) price broke through a 45° downtrending resistance line that traced back to the 2011 peak above $1900.

If one wanted to use this price point and figure tool exclusively, then while $1180 is acceptable, especially if we get three upticks after that (back up to $1240), $1160 is not so good looking.  Let’s look at a totally different type of chart now.   MSA’s long-term annual momentum chart of gold.

A Look Back At How We Got Here
Looking back:  3-yr. avg. momentum was the prime indicator that shifted MSA to major bear in January 2012 (either side of $1700).  At that point a very clear 3-point momentum uptrend structure was broken below.   And subsequent action never was able to get back above that level, particularly not on a monthly closing basis.  Noted with the red line (see charts below). 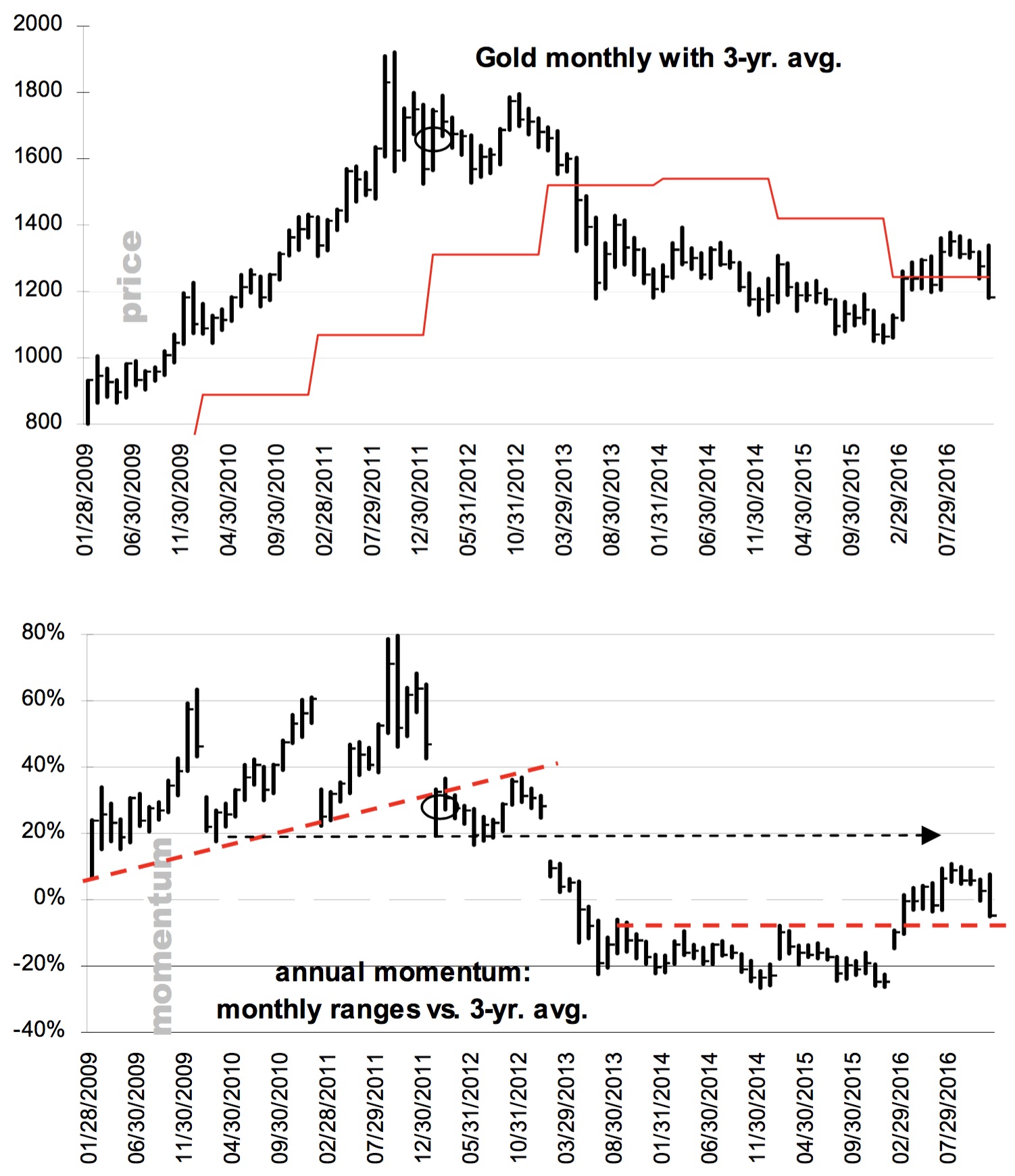 Then in February 2016 the same indicator broke out upside through a flat multi-year base as price moved through $1140- $1160 zone, which caused annual momentum to again move through its new key structural red line.   Current pullback is the sharpest one since the bull emerged and is somewhat reminiscent of the sharp rally in late 2012 which reached to the upper $1700s (from prior lows in mid-$1500s).  That rally tested our bearish resolve then.   While that rally was impressive on price, on momentum it was not so impressive.  It simply was not altering to the damage already done earlier in 2012.

Now we have a decline that did not reach clear resistance (around 20% over the zero line/3-yr. avg., black horizontal arrow), meaning that it is basically turning down from the middle of nowhere, technically speaking.   And at the present time is only nearing the levels on momentum that generated the upside breakout.   And so far it’s the first pullback that involves double-digit percent drop for momentum (about a 15% downswing when measured from its percentage peak above the 3-yr. avg. which is $1244 this year, to its current percentage low below that average).

THE BIG PICTURE: MSA Remains Bullish On Gold!
Does the drop negate anything?  No.  At what level would MSA say that the integrity of the positive momentum uptrend is in jeopardy or at least in serious doubt?   Close out a month back below the red horizontal.  That’s 8.5% or more below the 3-yr. avg. which for this year means don’t close a month out at $1138 or lower.

This is the BIG PICTURE of gold from MSA’s vantage point.   (Greater specifics and more detailed shorter-term analysis are available to our institutional subscribers).  Whether you find it useful depends upon your time-scale of measurement and what’s significant to you.   If you are a trader then maybe getting within a few percent of that annual momentum support level (prior upside breakout level) presents you with a risk control level and therefore can buy with low risk.   But otherwise this particular trend indicator (annual momentum) only changes major trend every several or handful of years, and while it might provide some intra-trend points of reference (such as that +20% level on the oscillator which was resistance, though not reached) often is only a broad guide to which side has the upper hand.   And unless we see a close back inside that momentum chart base, MSA assumes this is simply a sharp corrective pullback. 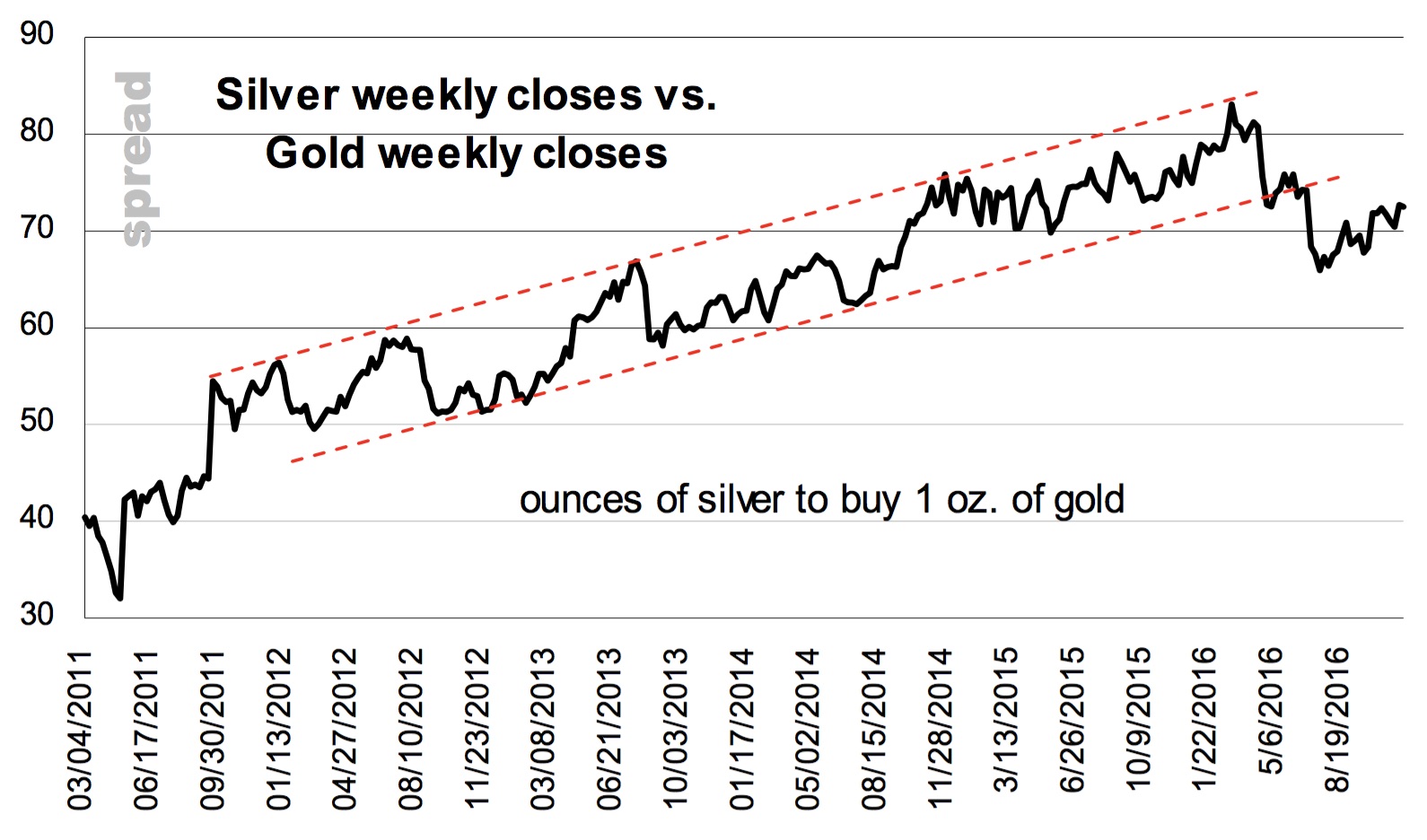 Keep A Close Eye On Silver
Many watch the gold/silver relationship as an indicator of the net trend of the precious metals.   If silver is in a positive trend vs. gold it is deemed to be a positive factor for ongoing bull trend in these metals.   Or, for the spread chart shown here, if the trend of these readings turns down that indicates positive performance by silver vs. gold, as it requires fewer ozs. of silver to buy 1 oz. of gold.

Current upticks on this chart are not negating in the least the major multi-year trend shift that occurred earlier this year.   The silver/gold relationship still bodes well for higher silver and gold prices.

WARNING: Look At The Insane Levels Of Speculation Far In Excess Of What Was Seen During Dot-Com Bubble