Here is a look at what is happening around the world, plus why Charles Ponzi would be proud.

Charles Ponzi Would Be Proud
November 27 (King World News) – Peter Boockvar:  Yesterday after I heard Dallas Fed President Robert Kaplan again express his concern with the high levels of corporate debt I found this chart on the WSJ Daily Shot from Goldman Sachs highlighting the net debt to EBITDA ratios for the median IG and HY ex commodity related company. It’s a good visual to what extent corporate cash flows are being asked to service debt. 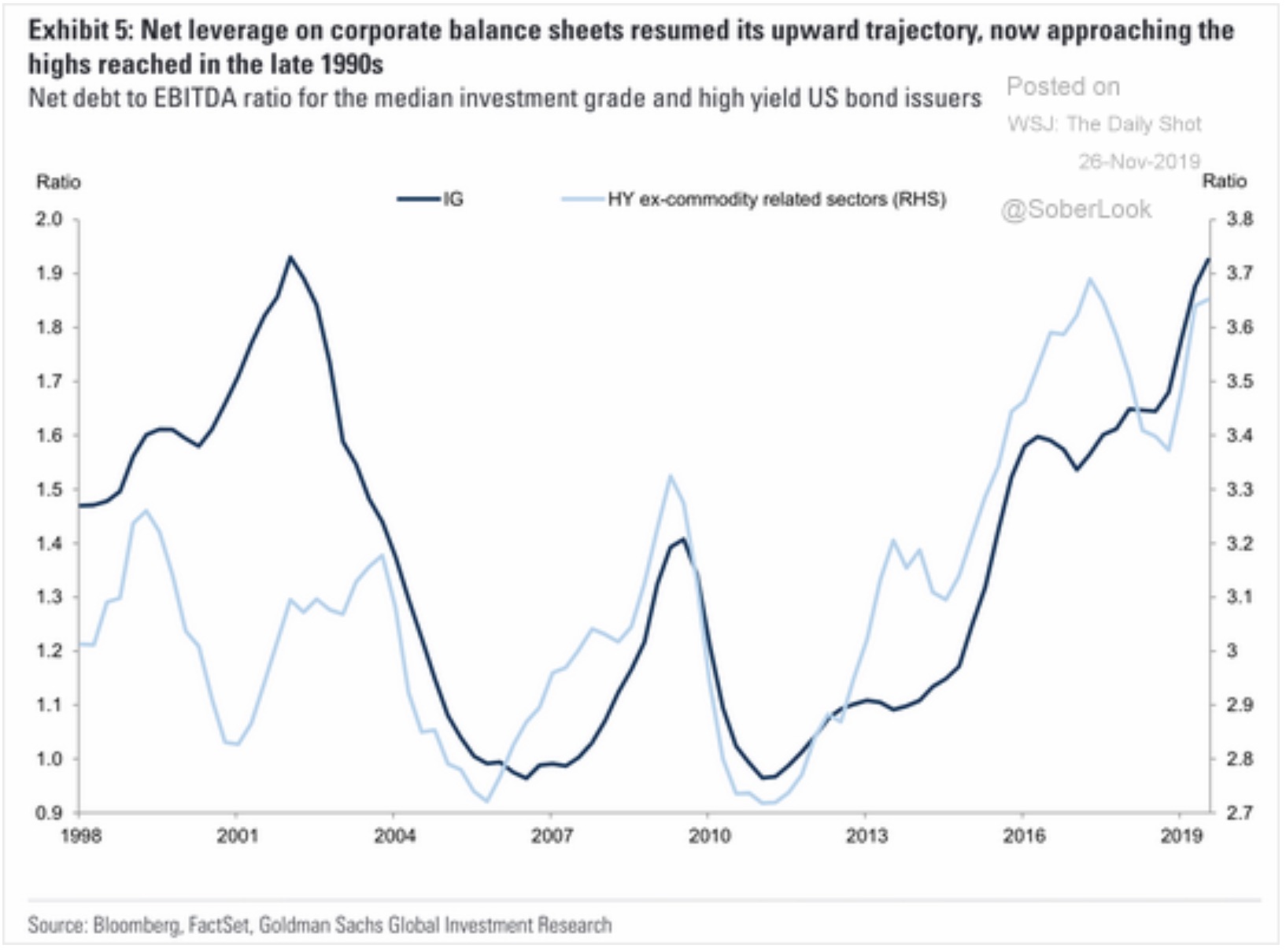 What we didn’t hear from Mr. Kaplan was that the Fed’s easy money policy, especially 10 years of it, is what encourages taking on excessive debt. And it incentivizes investors desperate for yield to lend the money. That’s the whole point of accommodative policy and we are just repeating in a different form what went on in the mid 2000’s. So instead of sobering up Corporate America, the Fed, via 75 bps of rate cuts this year, keeps inducing the financial system to take on more leverage. Charles Ponzi would be proud…

With the 10 yr yield down on the week as stocks go up every day, it’s a good time to visualize the two. Sometimes they correlate, sometimes they don’t.

Bullish sentiment continues to increase, according to the weekly II survey, as the mood follows price. Bulls rose to 58.1 from 57.2 and that’s the most since October 3rd, 2018. Those expecting a Correction fell for the 11th time in the past 13 to 24.8 from 25.7 last week. Bears were unchanged at 17.1 and the Bull/Bear spread is now 41, the widest since mid July. Bottom line, the Bull side is now about 2 pts from what is considered very extreme while anything above 55 is considered stretched.

Skewed by seasonal adjustment issues around this time of the year, the MBA said mortgage apps rose 1.5% w/o/w. Purchases fell by 1.2% w/o/w while refi’s rose 4.2% w/o/w. Don’t bother looking at these stats vs last year again because the timing of Thanksgiving is different.

… Italy remains challenged. Its consumer confidence index fell to the lowest level since July 2017. No explanation needed here. As for the Economic Sentiment index, it was little changed from October as the manufacturing component is at a 5 yr low.

Eric King:  “John, your share price has been skyrocketing after the latest drill results were released.”

This Sent The Stock Skyrocketing
John Lewins:  “We’ve been putting out results every four to six weeks.  And we literally report every single hole because just about every hole hits mineralization within a massive system.  If you look at the latest results that were released, that included 13 meters of 291 grams per tonne equivalent.   That is, according to analysts, the best gold intersection in the last six months and the 3rd best in the world in 2019.  And just 30 meters away from it we recorded 13.6 meters at 111 grams per tonne, also in the same vein.  So we have continuity of grade as well.

Those two holes are outside of our existing resource so they will be expanding our resource.  They are adding to a picture and that picture is now showing that we have mineralization of 1,000 meters vertically and it is still open at depth, and of course it is still open along strike as well.  Meaning, all of the mineralization sits directly above the adit where we access the mine, so from a mining perspective it is much easier to mine.  What we’re seeing is that we’ve more than doubled the amount of holes that we’ve put into this resource and there is huge potential to dramatically increase the upcoming resource that will be released in Q1 of 2020.

2020: Expect Dramatically Increased Gold Production And Cash Flow
At the same time, we’re looking at coming in this year at the top end of our updated production guidance.  This means that we will produce 76,000-80,000 ounces of gold this year.  And when you look at costs for the first three quarters, our all-in sustaining costs was around $650 an ounce, which is in the lowest quartile globally in terms of cost of production.  But what is even more exciting, Eric, is the fact that we are set to dramatically ramp up production in the upcoming year.  This will also substantially increase an already steadily rising free cash flow.

It is too early to release projections on free cash flow and earnings for the coming year, but it is safe to say, Eric, that both will be significantly higher than what was seen in 2019. We will also be releasing studies in mid-2020 that will give both investors and analysts an idea about the next phase of expansion.  In closing, Eric, 2019 was very much a transformative year for K92, but 2020 is shaping up to be even more exiting for shareholders.” K92 Mining, symbol KNT in Canada and KNTNF in the US. To see the drill results that sent the stock skyrocketing CLICK HERE.