Today the man who predicted the global collapse just warned what is coming will shock the world.

June 14 (King World News) – Egon von Greyerz:  “Extraordinary Popular Delusions and the Madness of Crowds” happen with regular intervals as Charles Mackay wrote about. It seems that the world experiences more delusions and madness than truth and sanity.

The pattern is always the same. The economy is never in equilibrium but moves in cycles of boom and bust. If these cycles were allowed to take their natural course, they would move up and down in a steady rhythm without reaching extremes at the top or bottom.

GOVERNMENTS’ OBJECTIVE IS BUYING VOTES TO BE REELECTED
But human psychology and hunger for power prevents these natural cycles to take place. Most leaders, whether they are kings or presidents, all have fear of failure combined with illusions of grandeur. As the economy peaks and the good times come to an end, they know that the best chance of not being ejected is for the good times to continue. Today’s leaders’ primary objective is to hang on to power by buying votes…

And how can they buy votes when the economy is turning down and the coffers are empty? Easy! You just print money out of thin air. As I discussed in my KWN article a couple of weeks ago, the Romans did it, and so did the French, the Brits, Germans, Argentinians  and everyone else.

PRICES DON’T GO UP – VALUE OF MONEY GOES DOWN
Initially when a country prints money to extend the prosperity, nobody notices that it is fake. After all, they are still called dollars or pounds. But gradually things become more expensive. The popular interpretation of increasing prices is calling it inflation. Nobody actually notices or understands that it is not prices going up but the value of the money going down as more and more which has zero value is issued.

THE PANIC STARTED IN AUGUST 2019
The current crisis started its acute phase back in August 2019. That’s when the Fed and the ECB started to panic. Since then they have flooded markets with trillions of dollars and euros and still the problems are not going away. But how can you solve a debt problem with more debt. I considered the Central Banks panic statements and actions back in August as an  extremely critical moment and as important as Nixon closing the gold window in Aug 1971. I wrote back then that the “world is now standing before a seminal moment and virtually nobody can see it.”

THE END GAME IS STARTING
The US and the world are now entering the end of the end of 50 years’ destruction of the world economy and the financial system. So it has taken half a century to reach the end game but this is like a blink of an eyelid in the history of the world.

The US is now leading the world economy into a total breakdown of not just the financial system but also of trade and social structures. And still nobody can see it. Stock markets are near the all time highs and the high end residential property market is booming in and around several capital cities. The US has all the ingredients that lead to the destruction of an empire: Deficits, debts, excessive military spending, debasement of the currency, breakdown of trade, plague, collapse of law and order and riots. Two things are missing to complete the picture, namely wars and hyperinflation. Sadly both these factors are likely to occur in coming years.

1971 marked the beginning of the end of the US Empire
Since 1971 the dollar has collapsed, deficits and debts exploded and social structures including law and order are breaking down. Like all empires, the US had the seeds of its own destruction within it.

This is how they achieved it:

The US has skillfully done this since the early 1960s. Every single year since that time, US  Federal debt has increased. Few people realise that the surpluses in the Clinton years were fake since debt continued to go up.

I produced the debt chart below the first time at the end of 2017 when Trump was elected president. I forecast then that US debt would reach $28 trillion by 2021 and double by 2025 to $40 trillion. These kind of debt increases seemed incredible at the time. But very few people study history and learn from the past. 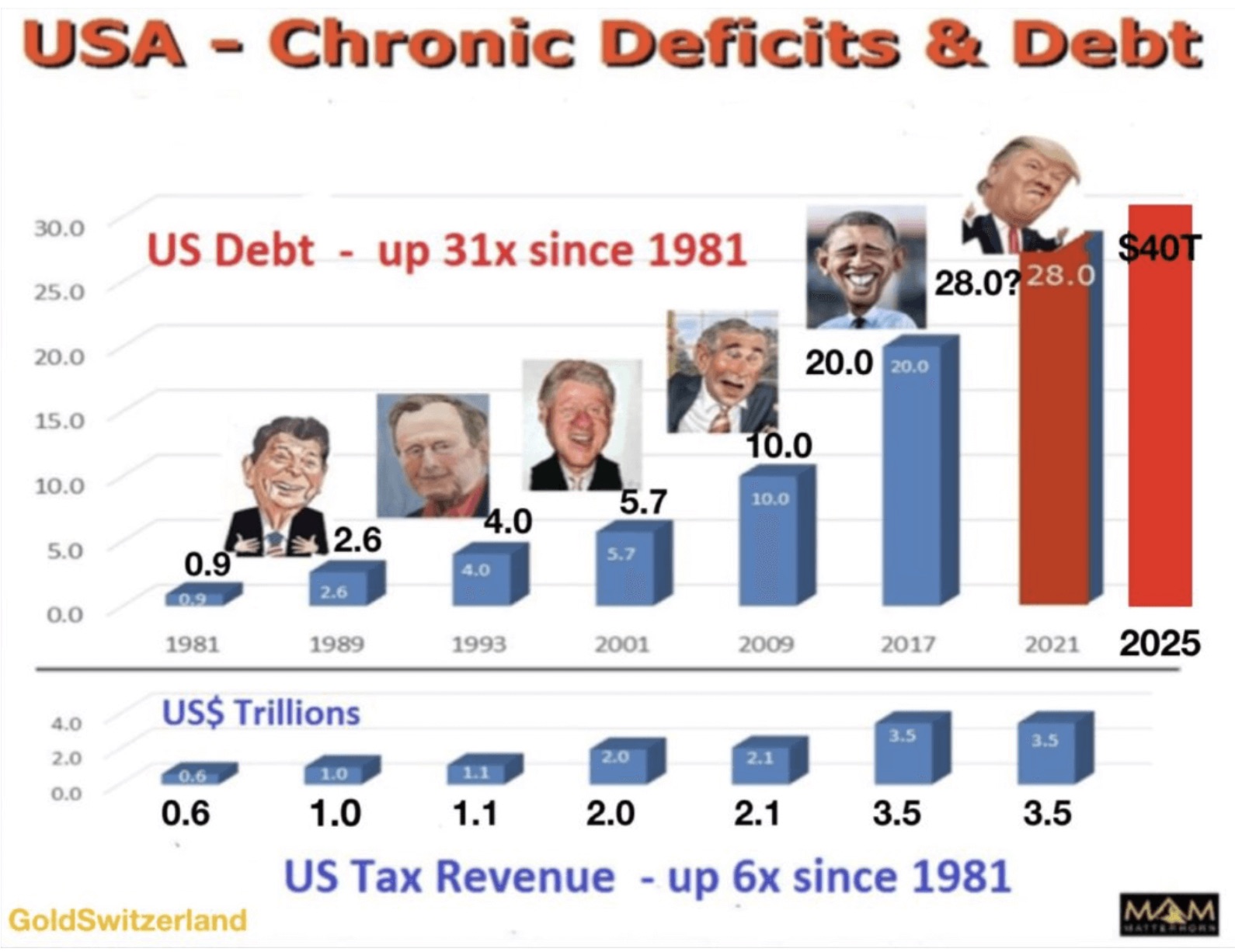 Since 1981 US Federal debt has on average doubled every 8 years, without fail. Obama doubled debt during his reign from $10 to $20 trillion. Thus, it was totally in line with history that the US debt would be $40 trillion 8 years later, in 2025. When I made this forecast I assumed that we would see a breakdown of the financial system starting in the 2020s. So history teaches us a lot more about the world than any economist or other forecaster ever understands.

The US debt is now at $26T and is very likely to reach more than $28T by the end of the calendar year and $40T by 2025. The projections of the Congressional Budget Office (CRB) and the Committee for a Responsible Federal Budget (CRFB) also confirm that these debt levels are not unlikely. If we get a real crisis in the economy and the financial system, we could be looking at much higher figures.

2. Import more than you export

Since 1974, the US has had a balance of trade deficit every year. As the graph below shows, the deficit has grown exponentially. In this century it has been running between $20B and $65B monthly and is currently running at $50B. 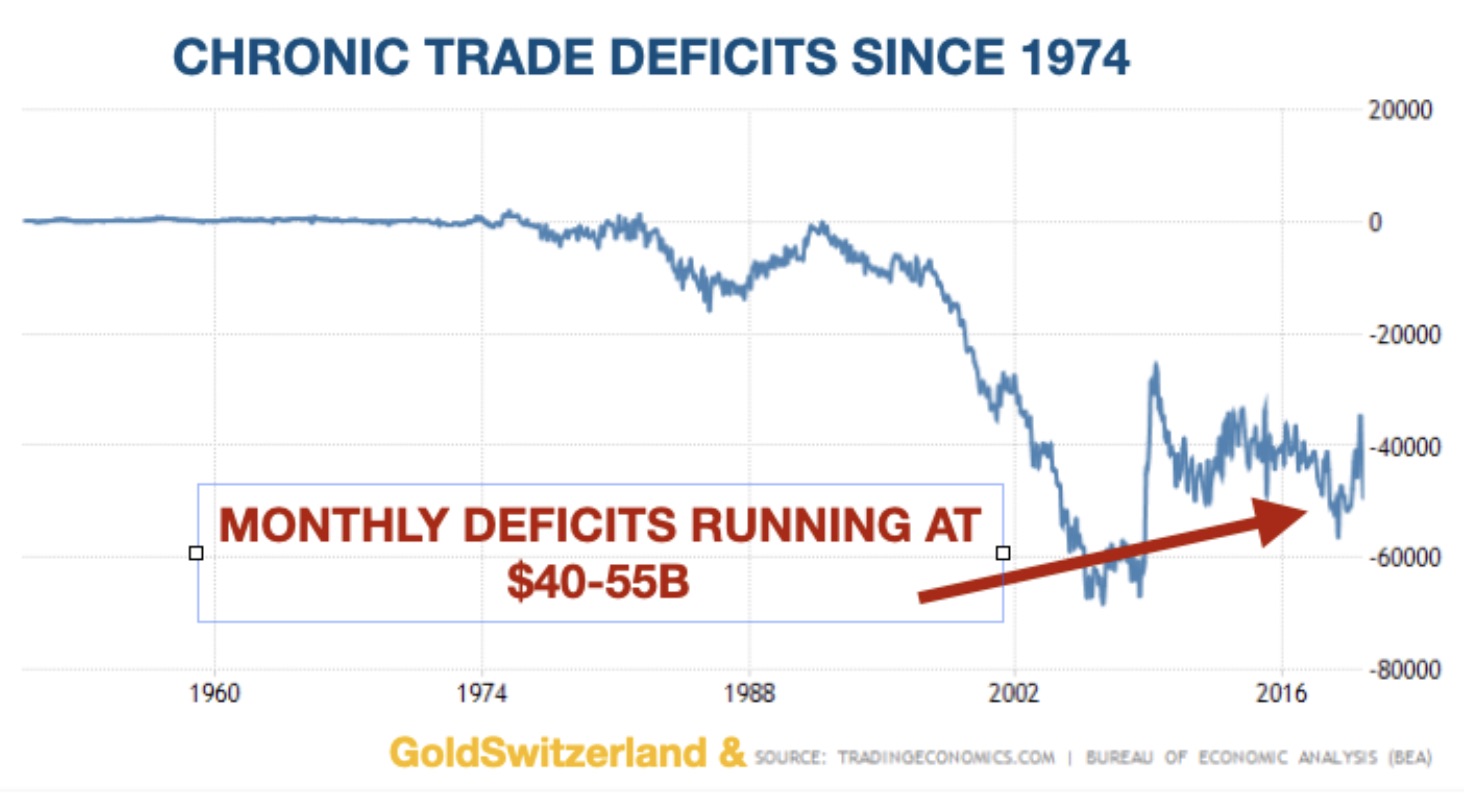 Half a century of every year importing more than you export is only possible with the assistance of the printing press combined with constant credit expansion.

No fiat currency has survived in history. There have been periods when various currencies were backed by gold or silver. This stops governments spending what they haven’t got. That was the dilemma Nixon had. After many years of the costly Vietnam war in the 1960s, President de Gaulle saw where America was heading and asked the US for payment of their debts to France in gold.

Gold backing of the currency prevents countries from spending money they haven’t got. Every time a nation has dropped the gold or silver standard, it has led to a destruction of the currency.

With deficits and debts rising fast, the US would have run out of gold and Nixon had no intention to balance the budget by cutting expenses. Much easier than to close the gold window and open the printing press which he did on 15 August 1971. And that was the beginning of the end of the US empire and the global currency system.

After Nixon’s fatal decision, The People’s Daily in China wrote:

“These unpopular measures reflect the seriousness of the US economic crisis and the decay and decline of the entire capitalist system.”

The paper went on:

“mark the collapse of capitalist monetary system with the US dollar as its prop”…. “Nixon’s new economic policy cannot extricate the US from financial and economic crisis.”

The Chinese saw the consequences of the US actions 50 years ago and the whilst the rest of the world is about to find out soon. Since 1971, the dollar and all major currencies have fallen 97-99% in real terms. Real terms means measured in gold which is the only stable currency in history. 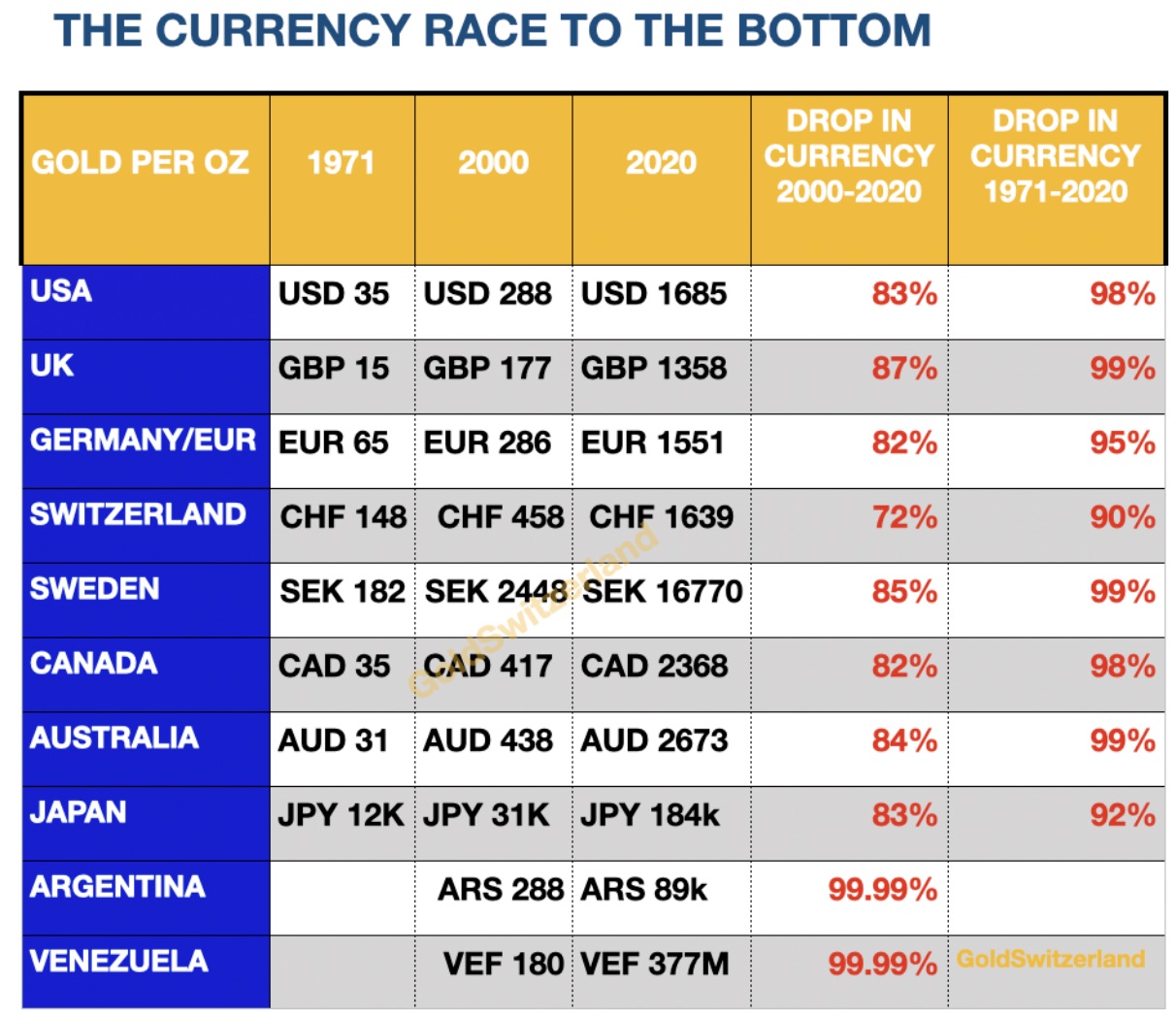 It is not possible to have chronic debts and deficits for half a century without total manipulation of all markets. The US has skillfully intervened in all financial markets be it stocks, bonds, interest rates currencies, derivatives or gold and silver. The result of this is that there are no real markets today and no real prices. It is a casino in which the government with the assistance of the Fed and their banker friends control virtually all trading and prices.

If we just look at interest rates, it is a perfect example of false markets.

In a market governed by supply and demand, the gap between interest and debt in the chart above would not exist. High demand for debt would automatically push the cost of debt up. But the laws of nature have temporarily been suspended by the Fed and the  US government. Since they can create unlimited supply of fake money, they can simultaneously set the cost of this money at zero. And since the money is worth nothing, it is self-evident that it should cost nothing to borrow.

But what most people don’t understand is that most assets they buy with the fake money has very little intrinsic value, whether it is stocks, bonds or property. In the coming collapse of the Everything Bubble, investors will have a very rude awakening as all these bubble assets decline 90-100% in real terms.

MARKETS
Stocks are showing the normal high volatility before the next crash which is imminent. The coming secular bear market will shock the world.

Gold & Silver
The LBMA (London Bullion Market Association) has just published an article in the Alchemist by my good friend Charlie Morris. Charlie makes a very credible case for $7,000 gold by 2030. The only point I would raise regarding his forecast is will it will really take 10 years to reach that level? I doubt it.

In the next few years the world will learn that the printing of money can never create prosperity. That is the time when the masses will turn to gold and silver. At that point there will be virtually no physical precious metals to buy at any price. The few who will be lucky enough to find some gold and silver then will need to pay multiples of current prices…For those who would like to read more of Egon von Greyerz’s fantastic articles CLICK HERE.

“The desire of gold is not for gold. It is for the means of freedom and benefit.” ― Ralph Waldo Emerson

Analyst David P. Out Of Europe – These Are Two Of The Most Important Wildly Gold Bullish Charts Of 2017!