Today the man who predicted the global collapse and has become legendary for his predictions on QE and historic moves in currencies and metals warned we are now headed for a 2nd collapse that will be even more terrifying.

INFLATION IS COMING
So here we have the Chiefs of three of the mightiest central banks in the world speaking with one voice and telling the world that the solution to the world’s financial woes is inflation. Kuroda, the Governor of the Bank of Japan would have said the same since they have been trying to get inflation above one percent for almost 30 years.

All these chiefs are singing from the same hymn sheet. Their language is veiled, which is the normal central bank speak. This is not a question of tolerating high inflation. Inflation is already here, but the way it is conventionally measured hasn’t yet shown up in prices. But the central bank (CB) heads know what is next. It is inevitable that the 30% or $6 trillion increase in CB assets this year will have a major inflationary effect.

Anyone following Austrian economics would have known this for quite some time since in Austrian terms, the proper definition of inflation is increase in money supply. 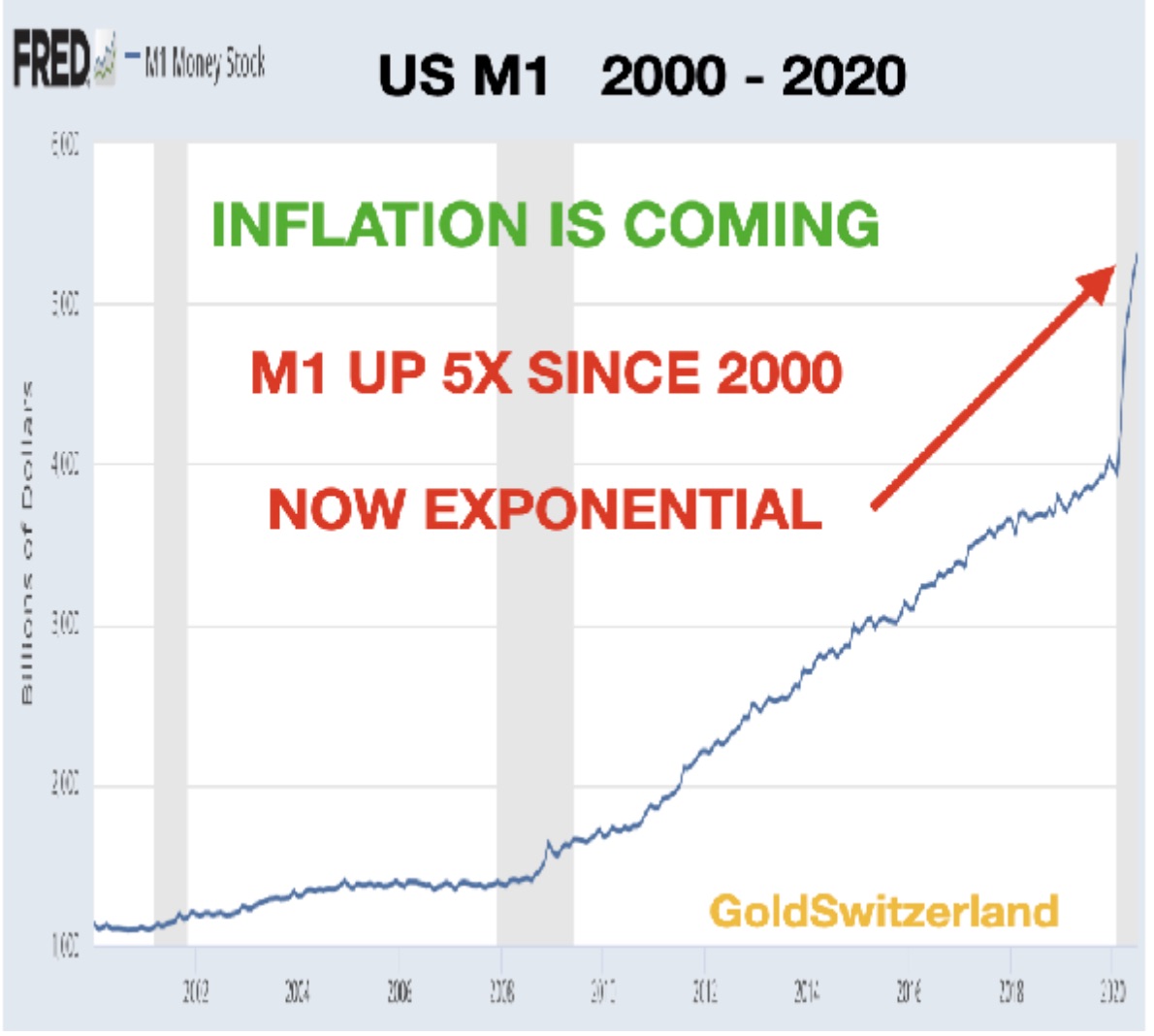 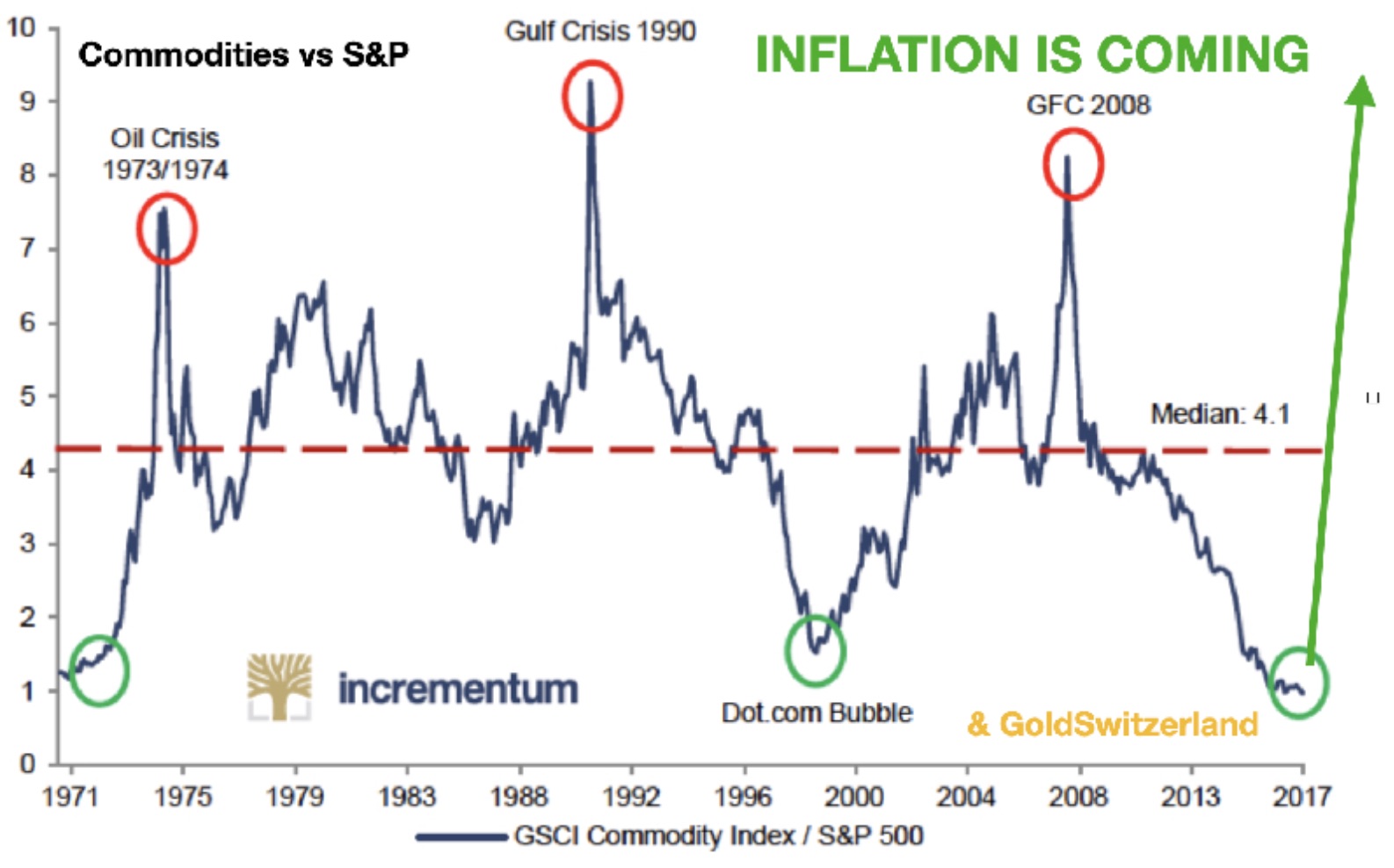 HELICOPTER MONEY
What is absolutely clear is that CBs around the world have not just turned on the money spigots but they have had to resort to Bernanke’s old catchphrase of Helicopter Money. The $6T CB money so far is just a few initial specs in the ether. The next phase will see massive dark clouds of money covering the sky. 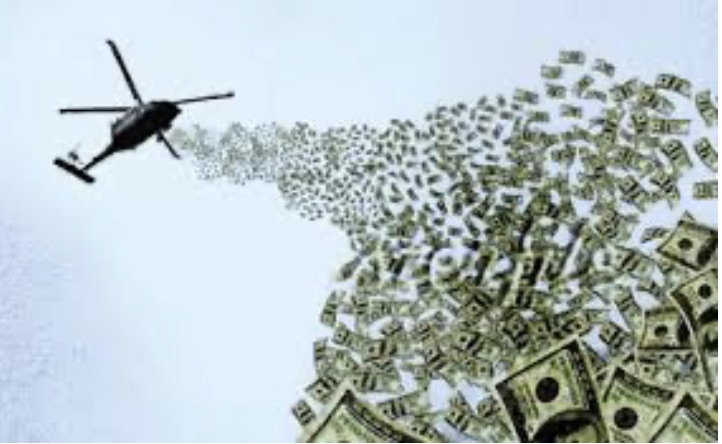 We will see inflation that the West hasn’t experienced since the 1970s. Eventually it will turn to hyperinflation.

The Fed will naturally lead this exercise as the biggest CB of them all and also with the biggest vested interest. And president Trump will use all his might to run those printing presses ever faster in order to enhance his chances of being reelected.

IMPORTANT ADJUSTMENT OF OUR SHORT TERM SCENARIO
For the last twenty years, I have been more concerned about risk and wealth preservation than opportunistic gains in the stock market. Overall this has worked very well since for example the Dow has fallen 70% against gold since the peak in 1999. (Chart further down in this article.)

So with gold outperforming virtually all investment classes in this century, why get involved in stocks, especially since physical gold held outside the banking system offers so much better protection.

At the end of January this year I forecast that a stock market crash was imminent and we saw falls in stocks of 30% around the world. But the recovery since then has been dramatic and many indices have made new highs although most European markets haven’t and nor has the Dow, yet…

So on the one hand, the state of the world economy, the debt, the bad debt, the fragile financial system, the unemployment, the collapse in GDP, Covid, the social unrest and many more factors certainly make me extremely concerned about the world economy and financial risk.

If we are now near the end of a major cycle and era, there must be a proper sendoff. So my “on the other hand” scenario is that we might now enter a spectacular final 12-18 months of an inflationary explosion thanks to the generosity of the central bankers around the world.

In the final send off, everyone is sucked into the stock market, professionals, amateurs, as well as orphans and widows. No one will be left outside the most spectacular finale in history. It will be like the Nasdaq in 1999 when everyone was a stock market genius. Everyone who had never invested in stocks before then became an absolute expert on tech stocks.

If this scenario is correct, there will clearly be massive opportunities in stocks. Commodity stocks and especially gold and silver stocks will do spectacularly well. But there will be many other exciting stocks like smaller or medium sized tech and biotech companies.

My 81 year old aunt in Florida, for example, who had never invested in stocks before was now a Nasdaq expert. She was watching the ticker on CNBC all day long. She was so good that she even taught her cleaning lady to invest in stocks and she also became an expert. This was for me the epiphany. When the blind leads the blind into the stock market at the very end of a bubble, it can never end well. And it didn’t of course. I am sure they both lost 80% or more, as most people did. But no one ever talks about their losses, only their gains.

IS COVID NOT GOING TO STOP THE WORLD?
The other interesting point if this scenario is correct is that Coronavirus is not going to kill the world. Many countries are already overreacting and locking down economies that don’t need to be locked down. It is a fact that especially in Western Europe, both hospitalisations and deaths are greatly reduced. In my two home countries, Sweden and Switzerland, there are very few in hospital and only the occasional death every 2-3 days. These could easily be due to normal flu or other circumstances. Number of cases are increasing but that is probably due to more testing. But it is crazy to lock countries down just because more people are tested positive for flu.

And the mad rush for a vaccine is only going to cost governments fortunes and benefit big pharma. No flu vaccine has any year been more effective than maximum 10-20% and that is after many years of testing. No one must believe that an imminent vaccine will help anyone but big pharma.

Just look at Sweden. No lockdown, no quarantine, yet life has continued as normal, restaurants and bars have stayed open and so have schools. The early deaths were mainly in old people’s homes and today very few are dying overall. Businesses and factories have continued to operate and GDP was only down 8% in Q2 against -33% in the US. Switzerland was even better with only 6% decrease in Q2 GDP.

DANGER WHEN BEAR BECOMES A BULL
Can I be wrong with my short term bullish scenario? When someone who has been very bearish on the market for a long time starts to talk about a spectacular final rally, it might be the right time to become really bearish.

Of course I can be wrong. Risk is very high but the final move or melt up can go on for longer and higher than any bear can imagine and the combination of inflation hungry central bankers and unlimited money printing is very likely to fuel this coming massive liquidity event.

GOLD $50,000 and Dow 50,000 IN BULLISH SCENARIO
So how does this relate to the number one wealth preservation asset in the world – gold?

Well, it is consistent with what I have been saying for quite a few years. I believe that gold will continue to outperform the general stock market as it has for the last 20 years. And I still believe that the Dow/Gold ratio will go to 1:1 as in 1980 when gold was $850 and the Dow was 850. I actually think that it will go below 0.5:1 but that might take a bit longer. 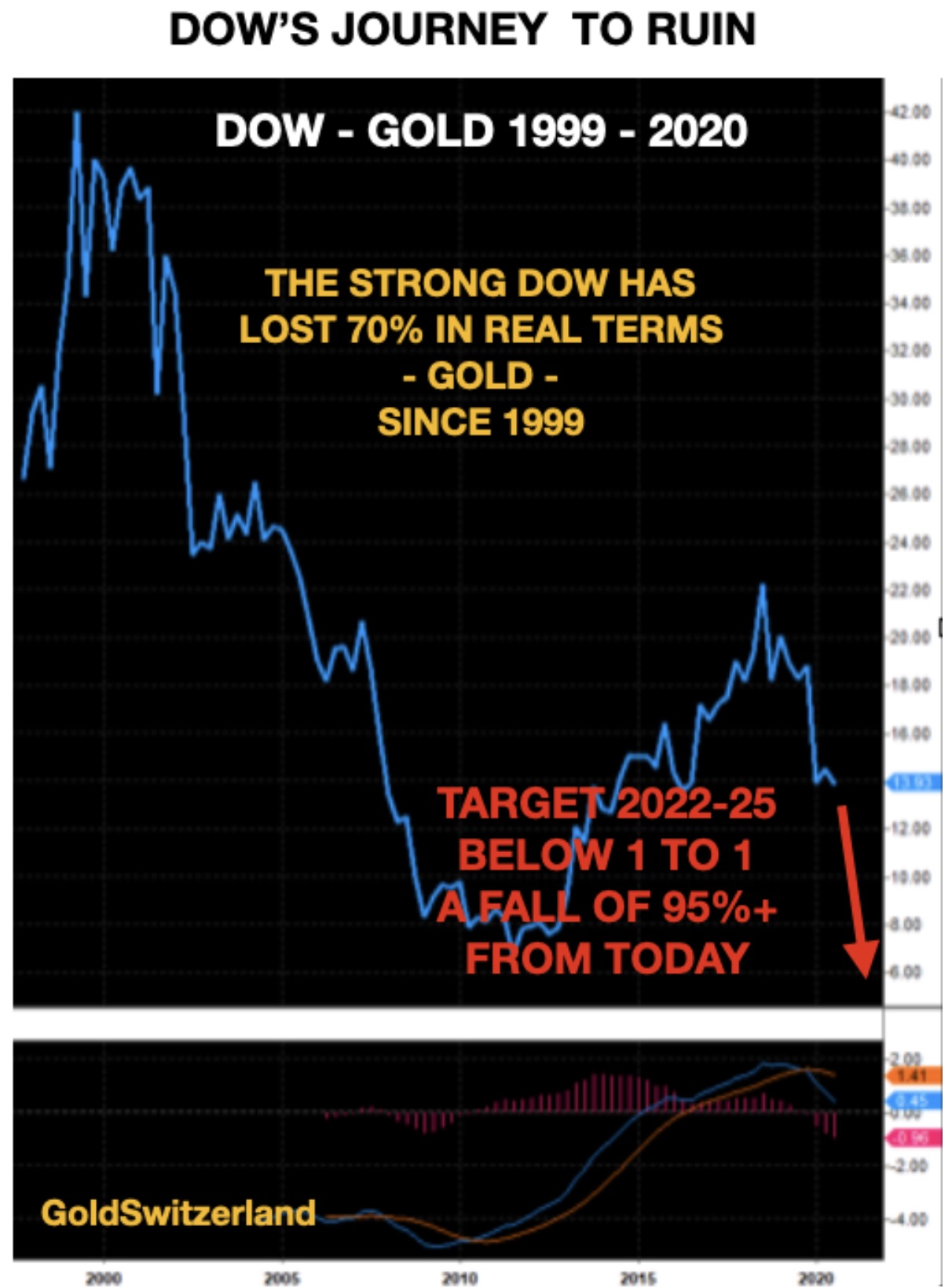 At some point when hyperinflation rules, the economy will turn down and the printed money will be totally worthless. At that point, stocks and gold will decouple and gold will continue up whilst stocks will fall or be stagnant.

NOTHING CAN REPLACE GOLD FOR WEALTH PROTECTION
The way we at MAM (Matterhorn Asset Management) look at the world, stocks are a much bigger risk than physical precious metals stored outside the financial system. If my slightly altered scenario is correct, it will certainly be worthwhile to hold some of the stocks I mention above.

But investors must remember that the foundation of their wealth preservation pyramid must consist of gold and silver.

Also, although I am somewhat changing my stance, it is only a matter of change in timing and not of the final outcome. If we get this inflationary blowoff in stocks in the next 12-18 months, it doesn’t change the end game. The end game is still hyperinflation that turns into a deflationary implosion and depression that lasts for one or many decades.

Remember also that gold is wealth protection and money even in a deflationary scenario although it won’t be at frothy levels. When the implosion starts, the financial system is unlikely to function for quite some time. At that moment gold and silver will be money as they have been in every period of crisis in history…For those who would like to read more of Egon von Greyerz’s fantastic articles CLICK HERE.

This May Send Gold & Silver Prices Soaring
***ALSO JUST RELEASED: BUCKLE UP: $20,000+ Gold And The Real Reason Why Silver Will Skyrocket Above $200 CLICK HERE.

Yesterday KWN Warned US Dollar Rally Was Coming…Here’s What To Expect Next For Gold, Silver And The Dollar