Here is more evidence of consumer depression and some of  the worst readings in history.

Consumers are depressed about the present…and the future
The latest round of surveys on the American consumer by the University of Michigan showed more deterioration. These are not the official month-end readings, but there usually isn’t too much of a change.

One of the notable aspects of the poll is that on pretty much all the questions, consumers are discouraged, including about their current condition and outlook for the future.

There are four main parts of the survey that we’ve focused on, shown in the chart below. Two (Sentiment and Current Conditions) are focused on the here and now, while two (Expectations and Business Conditions) are more forward-looking. Across the board, they’re near the lowest levels in more than 40 years. 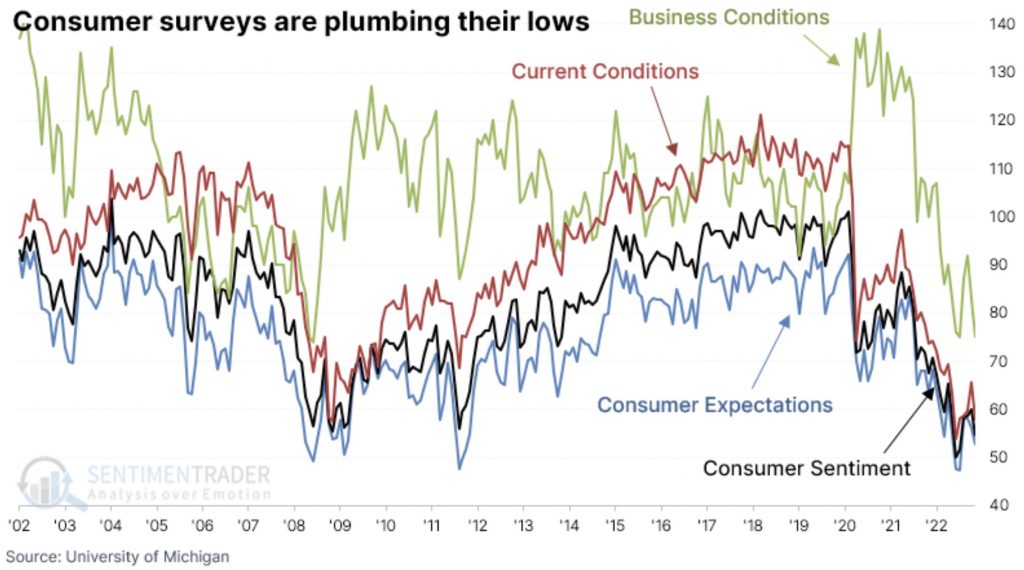 A six-month average of the four surveys has now dropped to the lowest on record. It exceeds the worst pessimism during the financial crisis, the early 1990s savings-and-loan debacle, and the late ’70s period of general malaise. All were associated with recessions. 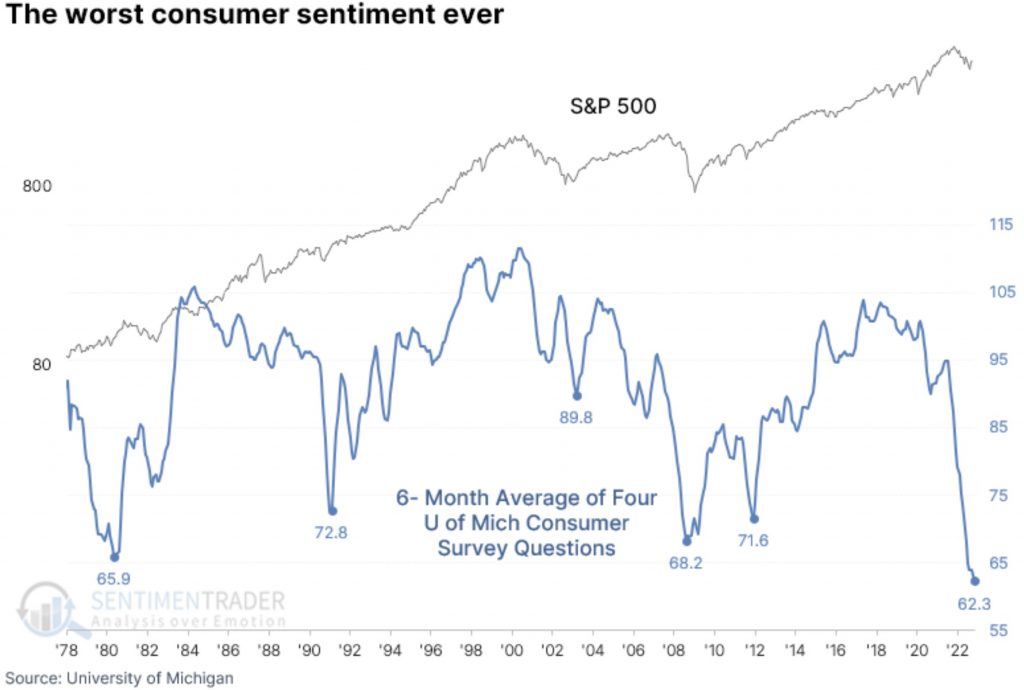 When the 6-month average of these surveys got this low, it was early during the financial crisis, and investors in the S&P 500 were still nursing losses three years later not including dividends. The others, however, coincided with the ends of bear markets or just after. Given that the 6-month average will now be dropping off low readings from June, it’s almost certain to have formed a trough in November. 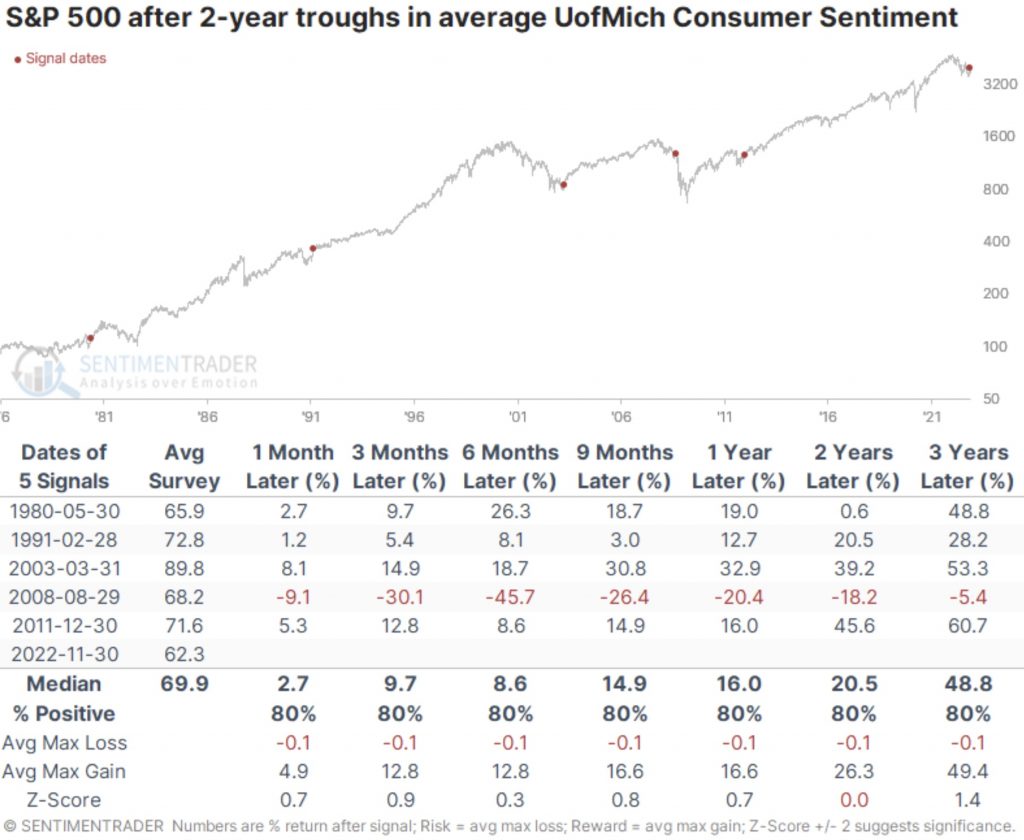 Depressed sentiment preceded good gains in Tech, Small-Caps, and Value
Among other indexes after these signals, the Nasdaq Composite enjoyed the highest average returns, followed by the small-cap Russell 2000. Other assets were mixed, but commodities generally fared poorly. 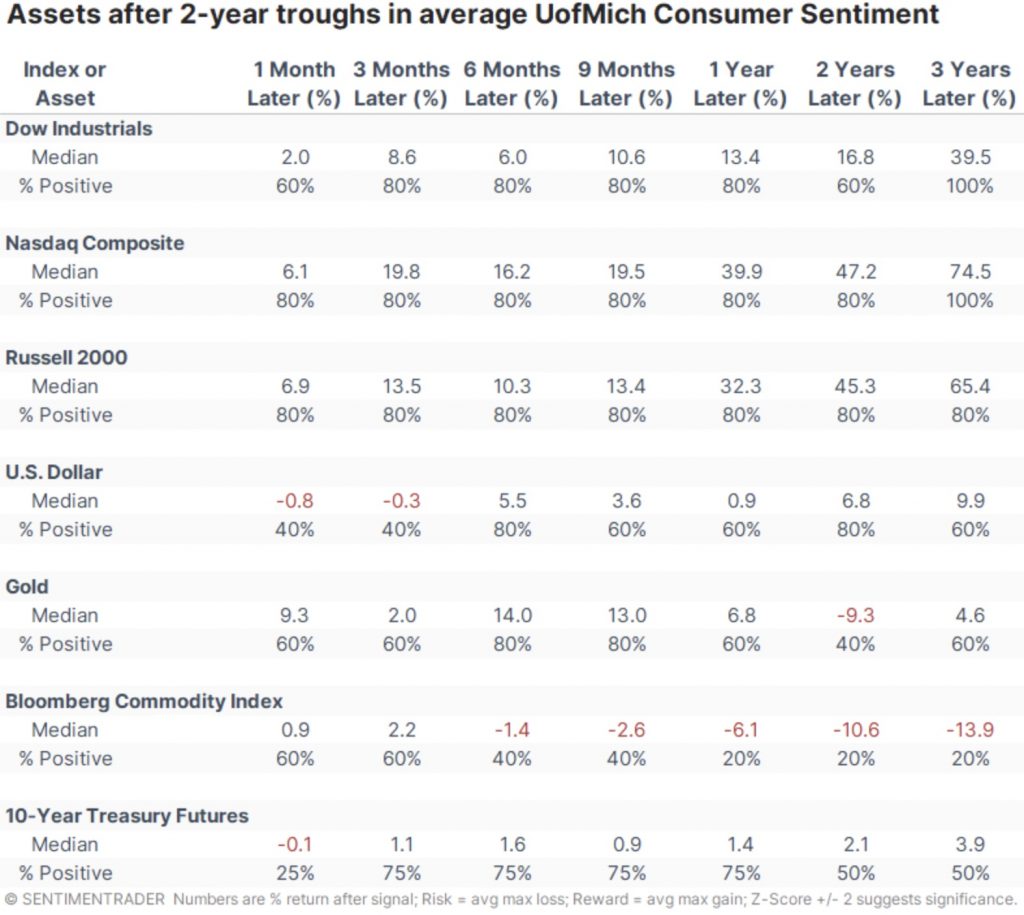 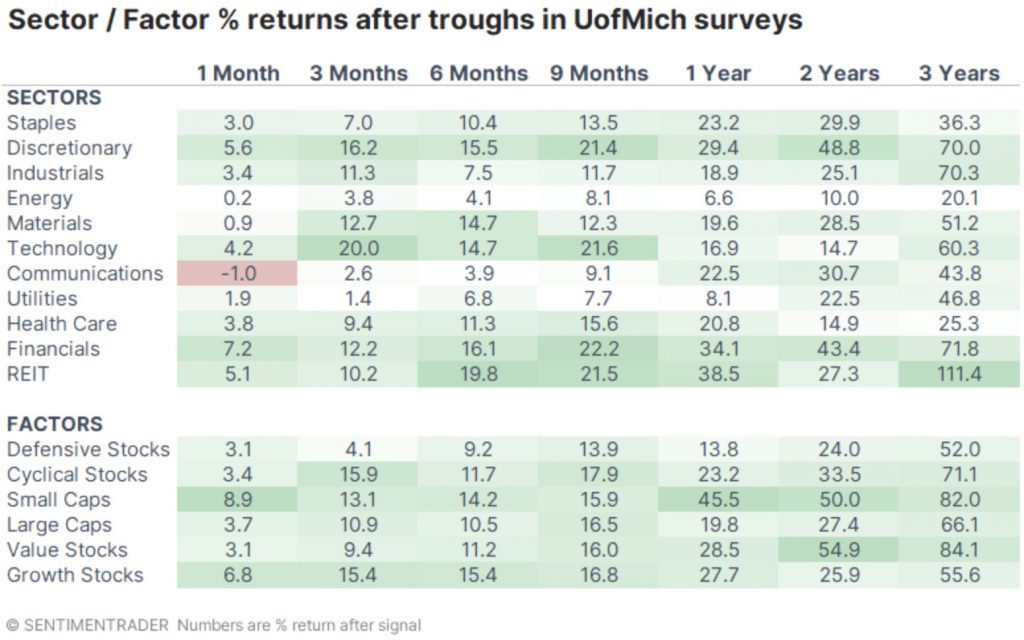 What the research tells us…
Surveys of consumer sentiment in the U.S. and pretty much everywhere else are in the toilet. They’ve plunged to some of the lowest levels on record, if not the lowest. Issues other than stock prices drive these surveys, and they’re not necessarily good timing mechanisms for the stock market – we can look at 2008 for evidence of that. But the wealth effect is real and a significant factor in how consumers feel about their finances. By the time it has gotten as depressed as it is now, lasting as long as it has now, the long-term returns of stocks have been consistently and strongly positive. This is another example of why Jason Goepfert is the best in the world at what he does – providing actionable market data. To subscribe to the internationally acclaimed work Goepfert produces at SentimenTrader CLICK HERE.