Today the man who predicted the global collapse just warned investors they should now prepare for the collapse of the world financial system.

Stock Market Time-Bomb And A World Falling Apart
May 10 (King World News) – Egon von Greyerz:  As the Nasdaq makes a new high for the year, the world outside the stock market time-bomb is falling apart. For example, the UN agency, The International Labour Organisation (ILO), reports that 1.6 billion jobs are at risk in the global economy. That is half of the global workforce of 3.3 billion. Particularly vulnerable are the 2 billion people in the informal economy. For most of these vulnerable people, this means no income, no food, and no security, reports the ILO. This is a human tragedy on a massive scale and most people in the Western world are totally unaware.

HALF UK ADULTS PAID BY THE STATE
Looking at the UK, 23 million people, which is half of all adults, are now paid by the state.  This includes people being furloughed, on unemployment benefits and public sector workers and pensioners. That is just an incredible proportion of the population which are getting free money for making no productive contribution. Yes, the human side is of course incredibly important and suffering people should be helped. The problem is only that THERE IS NO MONEY. What half of the adult population is receiving is money that doesn’t exist but is just printed out of thin air and thus has no real value.

REAL US UNEMPLOYMENT 39%
If we take the US, Q2 GDP is forecast at -35%.  Over 20 million have lost their jobs and both small and big businesses are going into a black hole. Most of these 20 million have no savings and couldn’t survive for one month without government handouts. If we take the real US unemployment figure based on ShawdowStats, it is now 39%. If we compare that to the 25% unemployment during the depression in the 1930s, it is a staggering figure…

If the world, as I believe, has now entered a secular downturn of major proportions, many of these 20 million will never get their jobs back. That either means no income, no food, and nowhere to live, or the government assisting these people permanently. Both of these outcomes will lead to perdition.  No income means misery, disease, and eventually a lot of people dying. Money printing is no solution either. Once money is printed on a larger scale, the currency will be totally debased and become worthless with hyperinflation to follow. Just look at Venezuela with a major part of the population struggling to survive.

THERE IS NO SOLUTION
This is what is so sad with the current economic crisis – there is no solution. Nobody should believe that it is the Coronavirus that has caused this catastrophe for the world. CV was the catalyst but the underlying problems have been there for a long time. The Great Financial Crisis in 2006-9 was temporarily patched up with trillions of dollars of money printing but it was never solved. The Great Financial Crisis was only a rehearsal and now the world is facing the inevitable collapse of the financial system.

CENTRAL BANKS PANICKED IN AUTUMN OF 2019
That there was something rotten in the Kingdom of Denmark (the world) became crystal clear in the late summer and early autumn of 2019. The ECB then made it clear for a second time that they ‘will do whatever it takes.’ And then the Fed started with daily and weekly Repos of $100s of millions. We have never been told the reason for the Central Banks’ panic actions, but it is totally clear that the financial system is crumbling under the burden of massive debts and derivatives.

And then in February-March of this year the most horrible catalyst in the form of a pandemic hit a fragile world economy at the worst possible moment. In my opinion, the world economy, lumbered with debts and deficits, would have crashed without the Coronavirus. But CV makes the problem much bigger and will cause the economic collapse to happen much faster.

What central banks around the world are doing will not make one iota difference when it comes to saving the world economy. You cannot solve a debt problem with more debt. The bankers have managed for some time to fool the world that creating money out of thin air can create wealth. But the world will very soon realise that it can’t. Global debt has more than doubled since the last crisis started. It was $125 trillion in 2006 and now global debt is over $270 trillion. With the current money printing that figure will soon be over $300 trillion and later increase by $100s of trillions.

MISPLACED IRRATIONAL EXUBERANCE
It is totally incomprehensible that stock market investors have for six weeks been buying the dip in the light of the world collapsing around them. They seem to be totally oblivious to the world economy. Instead they are just focusing on the injection of liquidity in the form of worthless money. These investors seem to believe that finance stands above everything else and is totally detached from what is happening in the real world.

It seems that these investors believe there is only one important sector in the economy which is finance and money printing. The worse the economy turns, the more money is printed and stock market investors love it. This is why the Nasdaq Composite has just made a new high for the year. This is just unreal. The world economy is totally paralysed but who cares when you have money printers who can just create trillions out of thin air. 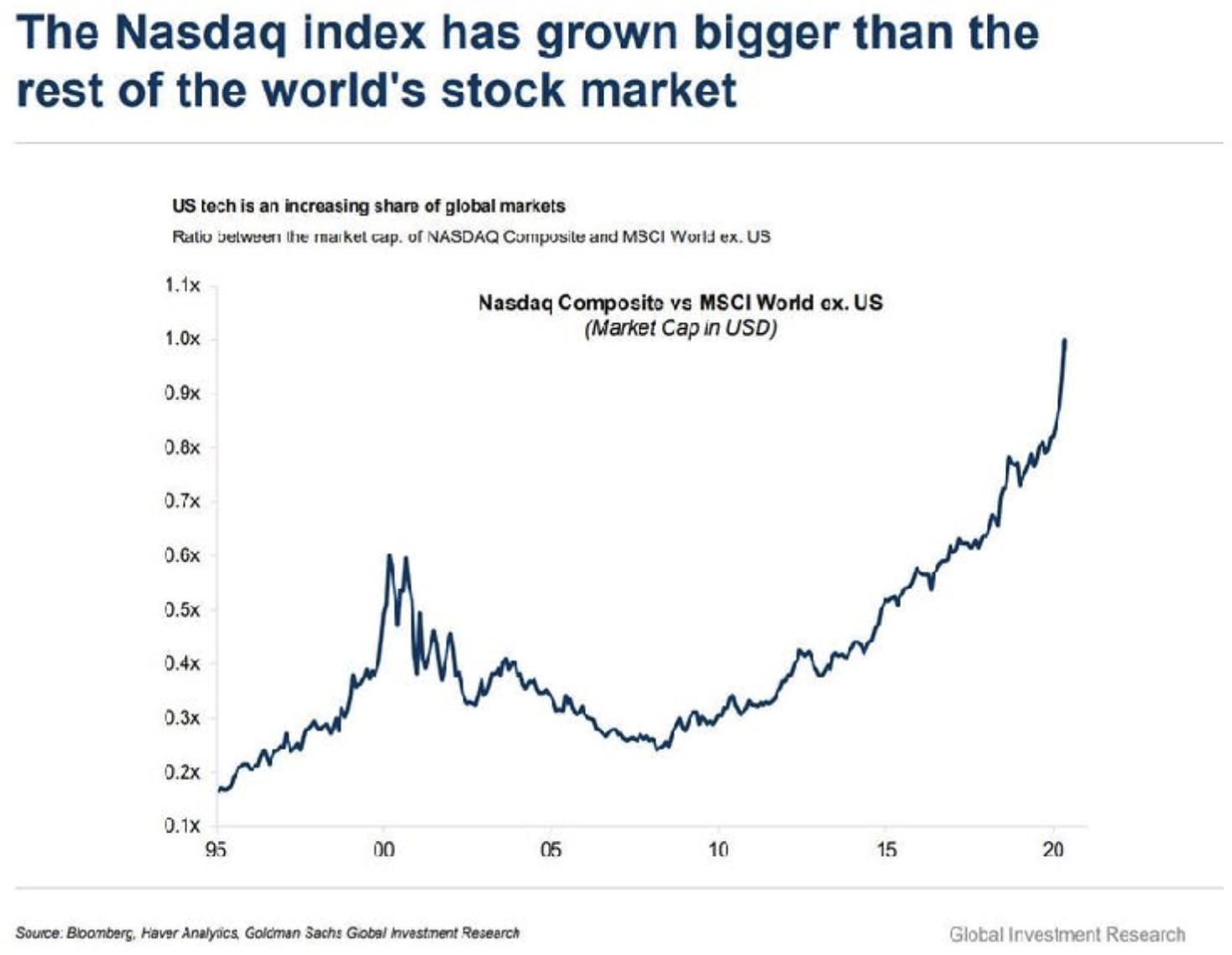 And who cares about companies making profits when central banks can create all the money the world needs. So it is really fortunate for investors that the money business is booming and causing all this euphoria in stock markets. To make money in the stock market you don’t need companies producing goods. All you need is a friendly central banker who keeps on printing.  Or at least until now!

YOU CAN’T AVOID THE FINAL COLLAPSE
What these investors don’t realise is that “there is no means of avoiding the final collapse of a boom brought about by credit expansion.” This is what the wise Austrian economist  von Mises said. I urge to read the whole message below:

The world is now in the midst of the final stage of a credit expansion. This will lead to hyperinflation and “total catastrophe of the currency system involved.” Sadly, this is totally unavoidable.

So what is going to be the likely effect on markets in the coming weeks and months?

MARKETS
The irrational exuberance in stocks is soon coming to an end. It could end next week or last another couple of weeks. But whenever it ends, the next fall will come as a shock for investors and be at least as bad as the initial fall. Long term we are looking at stocks collapsing more than 95% in real terms (vs gold).

Let’s just look at the Dow/Gold ratio, which topped in 1999 at 45 and is now 13.7. This ratio has been in a correction up since 2011 but has now resumed the downtrend. This correction is very similar to the correction in the 1970s. See the red arrows below in the graph. 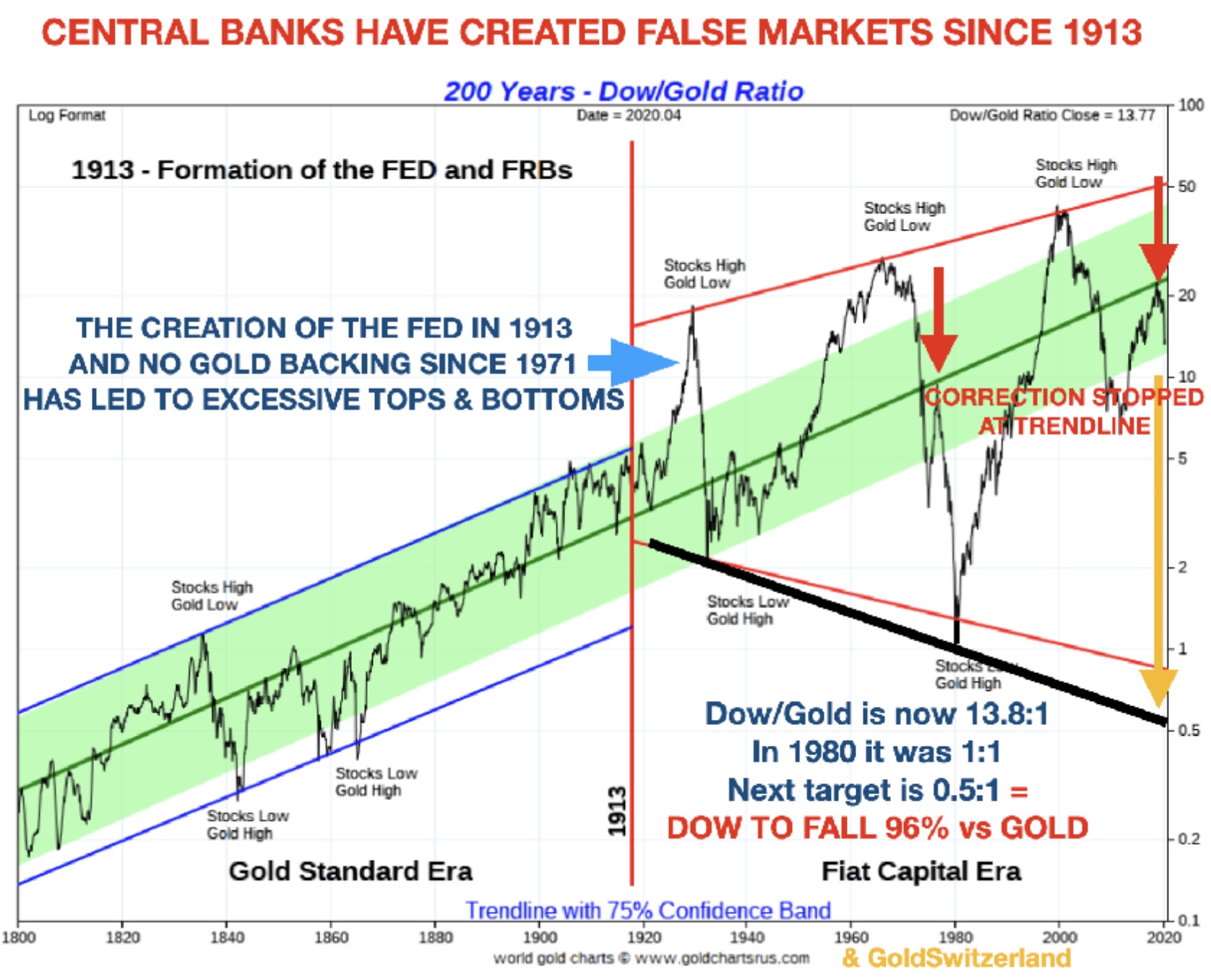 What makes this 200-year chart so fascinating is the amplitude of the moves. Since the creation of the Fed in 1913 and the closing of the gold windows by most countries (the US being the last in 1971), the chart is showing major swings and tops and bottoms are much more exaggerated than before 1913. This is caused by the constant interference of central banks and their manipulation of markets. There are no real markets today. Prices are set in a casino that has little resemblance with reality. The credit expansion and fake money has led to fake prices in virtually all instruments. If you don’t believe that, just wait to see what will happen next in markets.

Even more interesting is Gold/Silver Ratio. The Gold/Silver ratio is now over 100 but is in the next few yers likely to return below the long term average of 15. 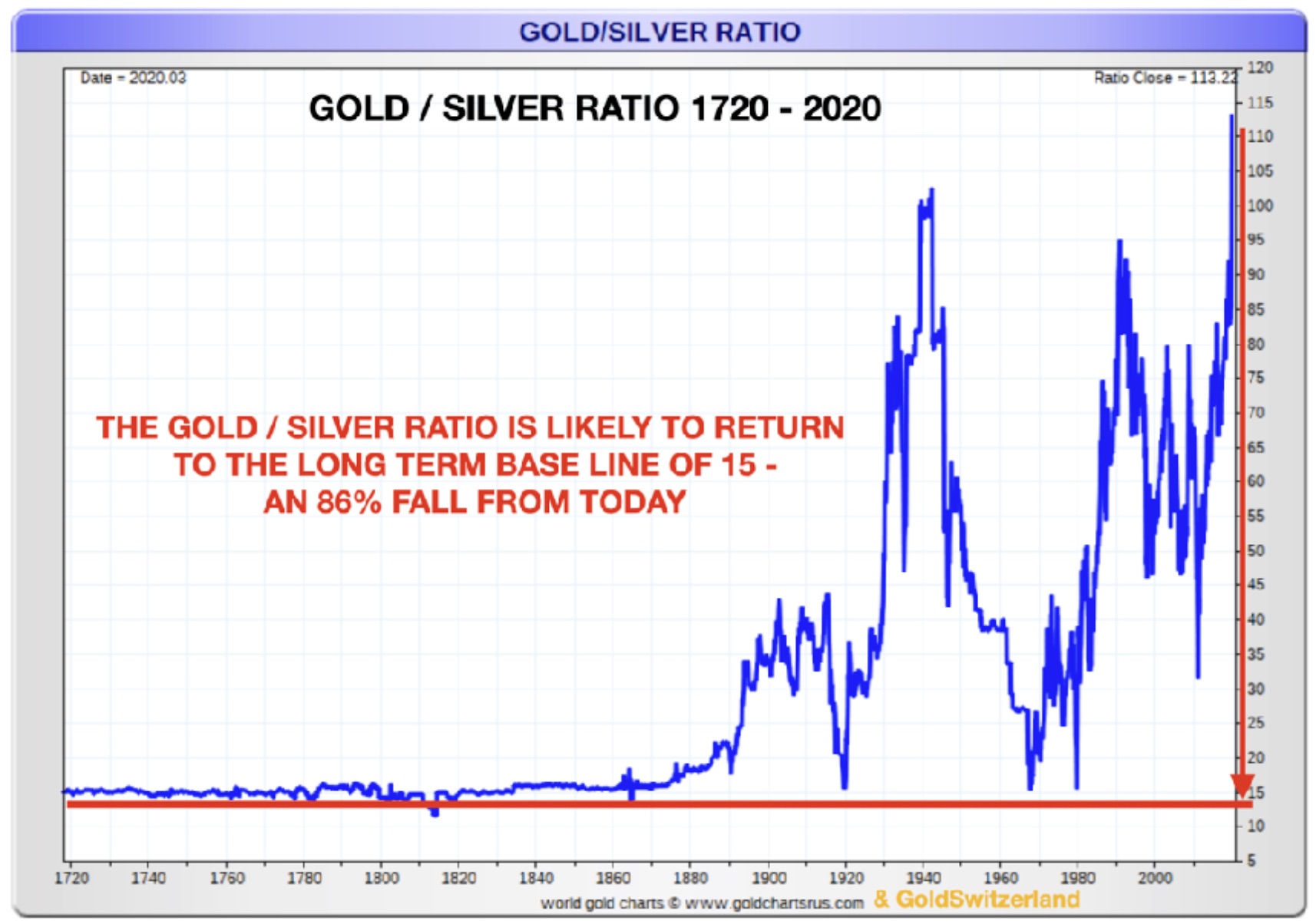 If we look at the Dow/Silver ratio this shows how traditional investments will totally collapse against hard assets, and especially against silver which is dramatically undervalued. The chart below shows a major move we are likely to see. This ratio is now at 1573. In 1980 it was at 17:1. If it falls to the long term trend line it could reach 6. That is a 99.6% fall of the Dow vs Silver in the next few years. That is both spectacular or devastating depending which side you take. So silver is likely to outperform most investments in the next few years and lead to enormous gains. But we must remember that silver is incredibly volatile and not for widows and orphans. We recommend to our investors to hold 20-25% silver and 75-80% gold in order to sleep well at night. 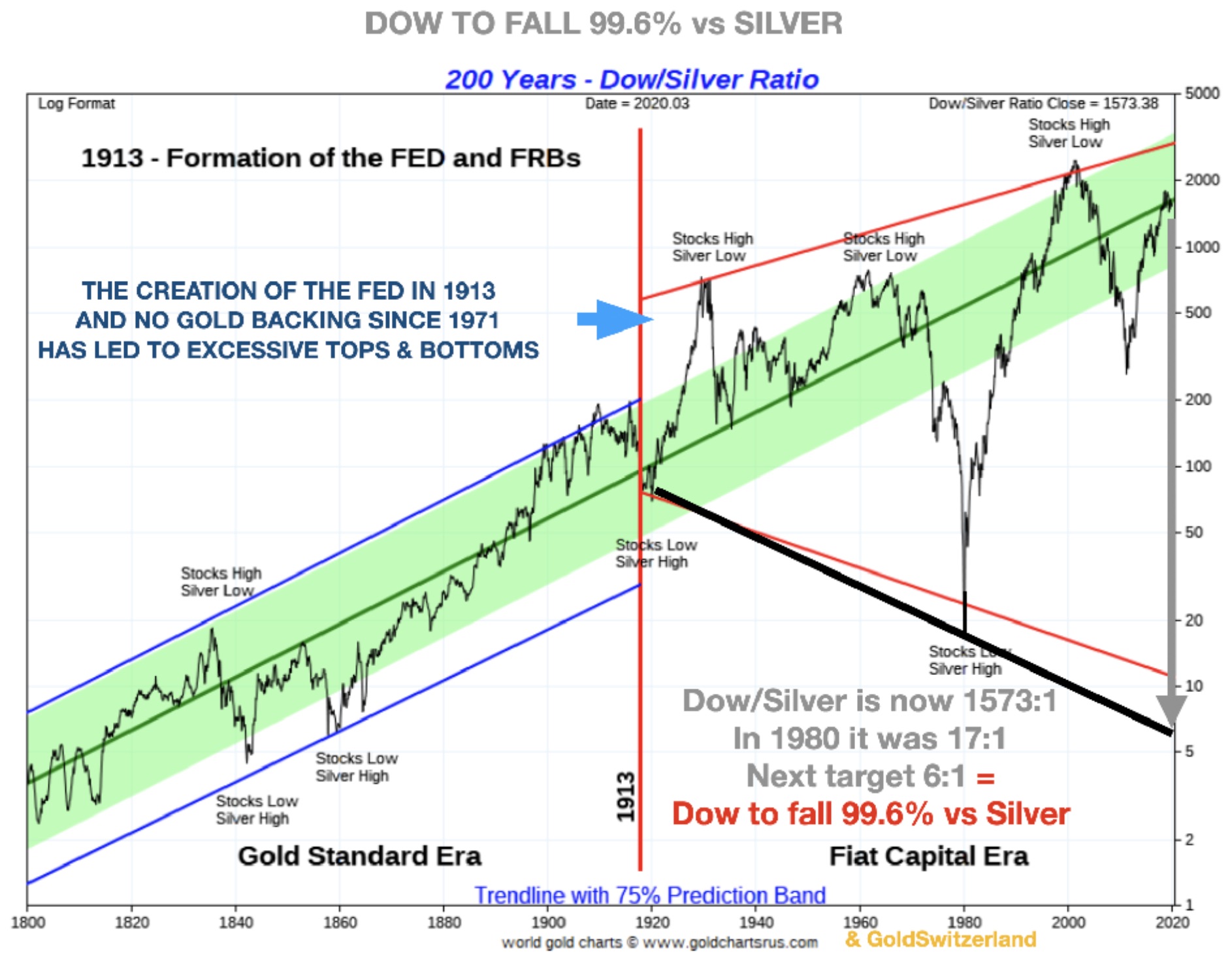 Normally the real moves in the metals are always led by silver. The gold/silver ratio has come down from 126 in mid-March to 110 today and looks like it is about to fall more strongly very soon. Silver is now going up slightly faster than gold, which is what we want to see when the uptrend in the metals resume. So I expect a major move up in gold and silver to be imminent. But as I keep warning investors, you are not holding metals for gains measured in worthless paper money but for financial survival and for protection of your wealth against a collapsing financial system…For those who would like to read more of Egon von Greyerz’s fantastic articles CLICK HERE.