From Investors Intelligence:  "After choppy trading the major indexes showed small mixed weekly changes at Friday's close. Despite some recent losses they still remained near their 2015 highs even as the deadline for Greece was at hand, without any sign of a resolution. Many stocks have not performed as well as the averages and some advisors continue to point to those ongoing divergences. Others note the DJ Transport relative weakness as a bad sign, along with seasonality. Optimists remind not to fight the tape. The result was little overall sentiment change. It shows still healthy skepticism that signals cash on hand and allows for a rally.

A second weekly decline ended with the bulls at 45.5%, down from 47.4% and 51.5% the prior two issues. The new reading is a low since Oct-14. That was the period of the last significant index correction. It is also one of the few below 50% readings this year. Bulls above 50% show elevated risk, Bullishness at the +60% level points to fully invested outlooks and market tops. That was last seen in Jun-14. Bullishness could fall quickly if stocks do correct again. The bulls were down to only 35.3% at the bottom mid-Oct-14, down from above 60% four months earlier.

There was no change for the bears at 16.5%. Recent weeks are up from early May when the bears fell to a 2015 low of 13.9%, the same depressed reading that also ended Nov-14. This remains a lonely outlook with most bears maintaining that stance all of this year and before.

The correction count increased to 38.0%, from 36.1% last week. That is also an extreme since Oct-14 when the number was above 40% for three weeks (peaking at 46.5%). Since the surge off the Oct-14 bottom, the correction count jumps above 35% when stocks retreat and drops when markets rally. The high correction reading after only modest stock weakness could inspire new buying again. Many advisors note the overall market trading range and play the short term market moves as sentiment shifts.

The spread between the bulls and bears contracted further to 29.0% after dropping to 30.9% a week ago. That suggests a lower risk buying opportunity, contrasted with the April difference of 43.5%. That dangerously high reading was also seen late Feb. Differences over 30% are a building worry and above 40% signal major caution. At the mid-Oct-14 low the spread was only 17.1% and favorable for accumulation in a rising stock environment. In Aug-2013 it was 13.4%. Bears haven't outnumbered bulls (a negative spread) since Oct-2011. 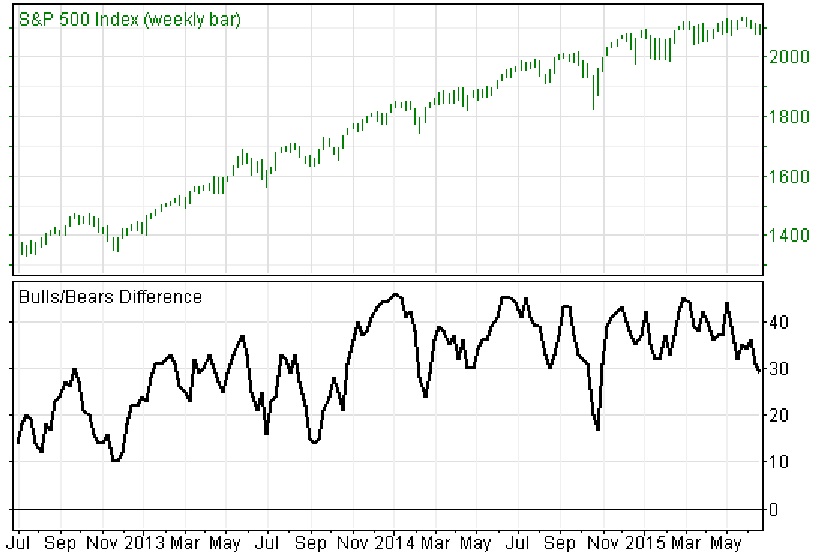 ***ALSO RELEASED: This Is How The Economic Collapse Is Destroying People's Lives CLICK HERE.