Here is a look at what central banks are doing, plus skyrocketing US Trade Deficit and German inflation.

It Is Our Responsibility
October 28 (King World News) – Egon von Greyerz:  “There are values much more precious than Wealth or Gold — family, close friends, nature, music, books and much more. But with the risks and problems that are now facing the world, it is also our responsibility to protect our family and assist our friends however we can.”

Look At What Central Banks Are Doing
Peter Boockvar:  7 1/2 hours after the Bank of Canada decided to end QE, the Brazilian central bank raised its Selic rate by 150 bps to 7.75% as expected. This rate was 2% before their first hike this year in March. With the long experience with inflation, Brazil is not a fan of negative real rates. They expect another rate increase by year end which would bring its rate close to expected inflation of 9.5% by year end.

The Fed’s current idea of dealing with inflation is to take their balance sheet from $8.5 Trillion to about $9 Trillion by next July and still have rates at zero. Meanwhile, the markets continue to run faster than them with another flattening of the yield curve today. With the 2 yr yield up another 4.4 bps to .55% and the 10 yr flat, the spread between the two is down to 99 bps vs 125 bps one week ago. It was mid June when the Fed finally said that they were talking about tapering that the flattening really began and it was 137 bps then. The 5s/30s spread narrowing has been even more pronounced and currently sits at just 73 bps, the lowest since March 2020. It stood at 91 bps on Monday and is today at 75 bps and vs 110 bps three weeks ago. 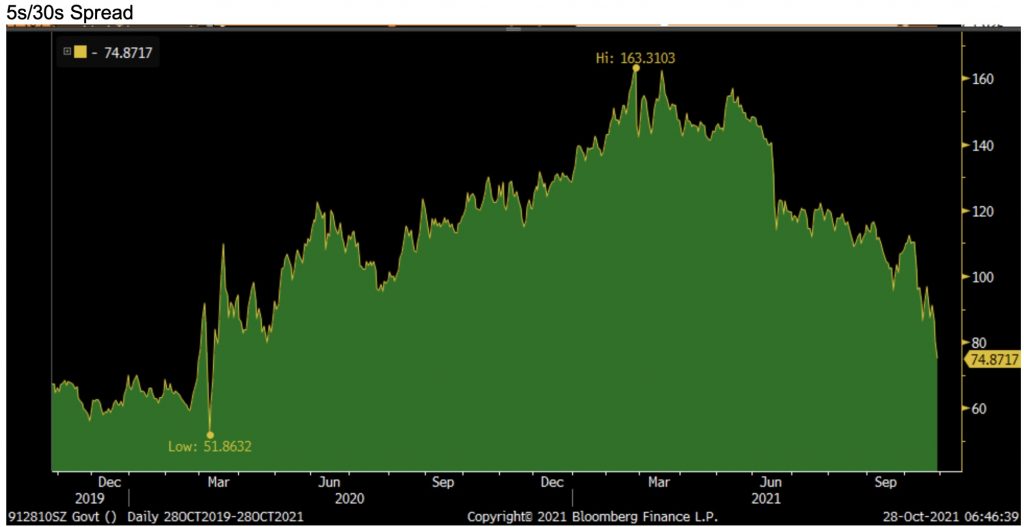 Meanwhile In Japan
The Bank of Japan did nothing overnight as expected and they will likely be the last central bank to react as long as they continue to have their delusional 2% inflation target where the government itself has purposely lowered mobile phone fees that has single handedly suppressed inflation. So one arm of the government is fighting against another on this inflation goal. Governor Kuroda said:

“I believe that the sort of inflation acceleration risk that’s been a cause of concern abroad is extremely limited in Japan.”

While he is right to an extent on consumer prices, wholesale prices have risen sharply in Japan as they have everywhere. He also won’t bow to any peer pressure from other central banks.

“Central banks take policies most appropriate for their economies and prices. Their decisions won’t have any direct impact on Japanese monetary policy.”

He did also welcome the recent yen weakening which also proves how nonsensical his economic theories are. The yen is weakening because of higher energy prices that Japan must import and that weaker yen makes it even more expensive to do so. While that maybe gets him closer to the inflation he wants, it makes Japan poorer for it.

…[US] record high trade deficit of $96.3b. It is not however yet at a record high as a percent of GDP. 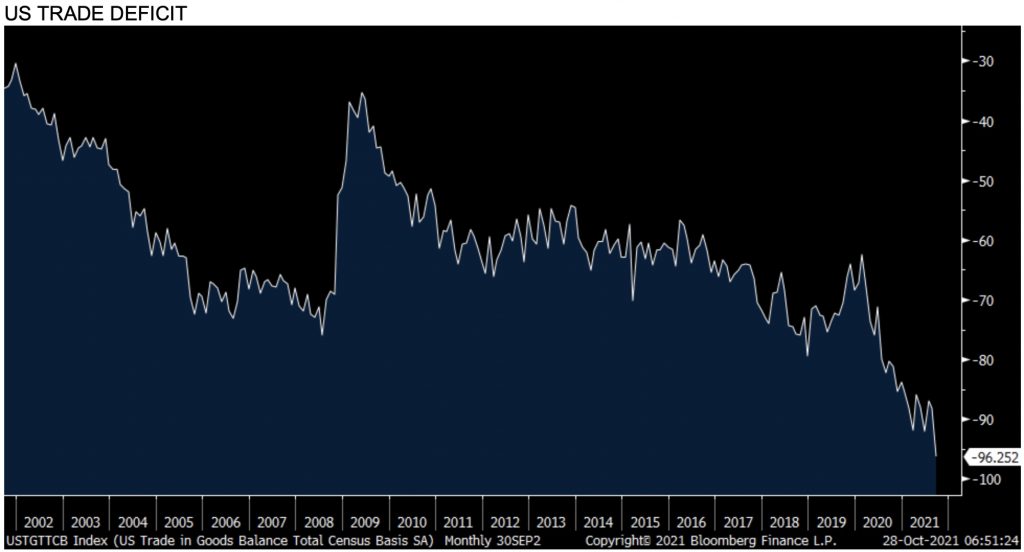 ECB And German Inflation
Christine Lagarde, president of the ECB, is acknowledging reality by saying the “phase of higher inflation to last longer than expected” but they are still hopeful that it will fall back in 2022. There is no talk from her on dealing with this because she is repeating her belief that it’s temporary. but sovereign bond yields are rising sharply once she started talking. The Italian 10 yr yield is up 11 bps while Germany, France, and Spain to name a few are rising by about 6 bps. The euro is also moving up.

NOTHING TO SEE HERE:
Just A Little “Transitory” Inflation Happening In Germany 🙂 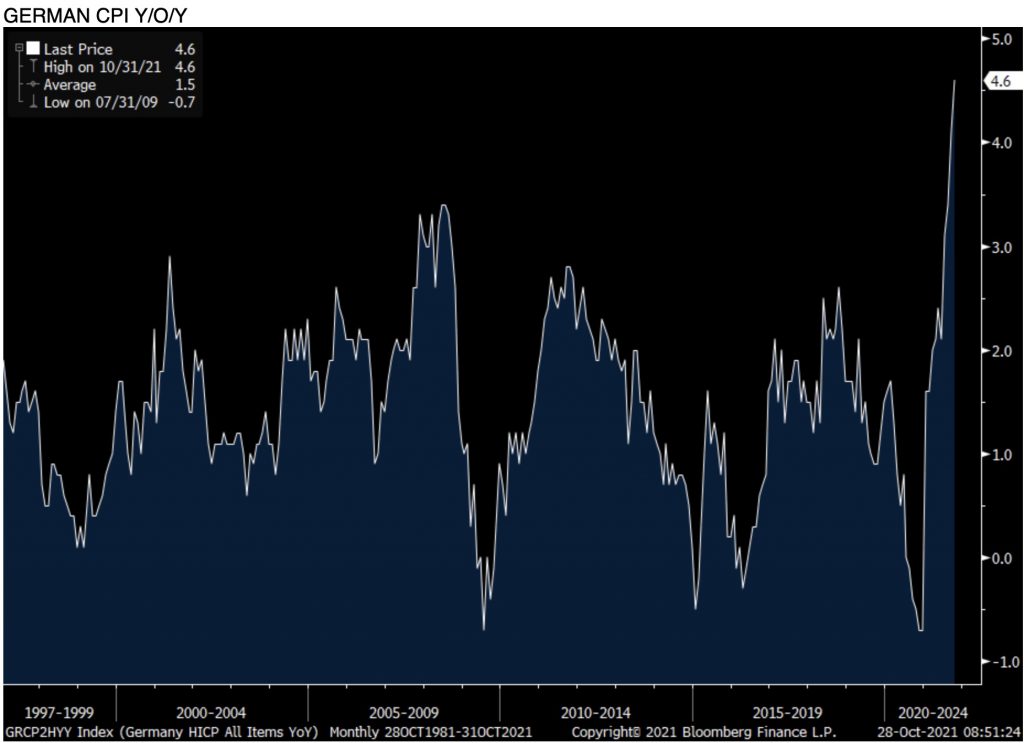 BIG NEWS: 211 Metres Of 20.36 Grams Per Tonne Gold At New Discovery!
K92 Mining, one of the highest-grade gold producers in the world, just reported 211 metres at 20.36 grams per tonne of gold along development at a new vein system called Judd. This is very significant for several reasons:

#1) 2nd big discovery in 4 years at their Kainantu Gold Mine, and the first one, Kora received the 2021 PDAC Award for Best Global Discovery.
#2) Mineralization is similar to Kora, it’s next to Kora, works through the same mill and mining is planned for this quarter.
#3) Exploration is just scratching the surface.

“While exploration at Judd is still in its early days, it is not only open along strike to the south and north, up-dip and down-dip, but also has at least four known veins, a known strike length of +2.5km that is sparsely drilled and similar mineralization to Kora. Importantly, vectors to the south, including extensive artisanal mining on surface and shallow historical high-grade intersections are very promising.”

“…exploration activities at Judd will be rapidly expanding imminently. By early November, we plan to have at least two-thirds of our underground drill rigs on Judd… Activities at Judd South are also planned, with surface mapping and sampling underway…”

K92 Mining, symbol KNT in Canada and KNTNF in the US.