Here is a look at the Dow/Gold ratio, Fed policy and shortages, trouble in Japan and China, plus housing.

Stocks Headed Down Now, Gold Headed Up!
September 22 (King World News) – Benjamin Deutsch:  Ratio sideways since March 2021! When this ratio starts to drop (it will happen), things get out of control quickly. Look closely when GOLD hits $ 1870-1880. This will trigger the 5th and last wave of this Gold bull market!

10 Year Chart Shows Dow/Gold Ratio About
To Collapse…Stocks Down, Gold Up! 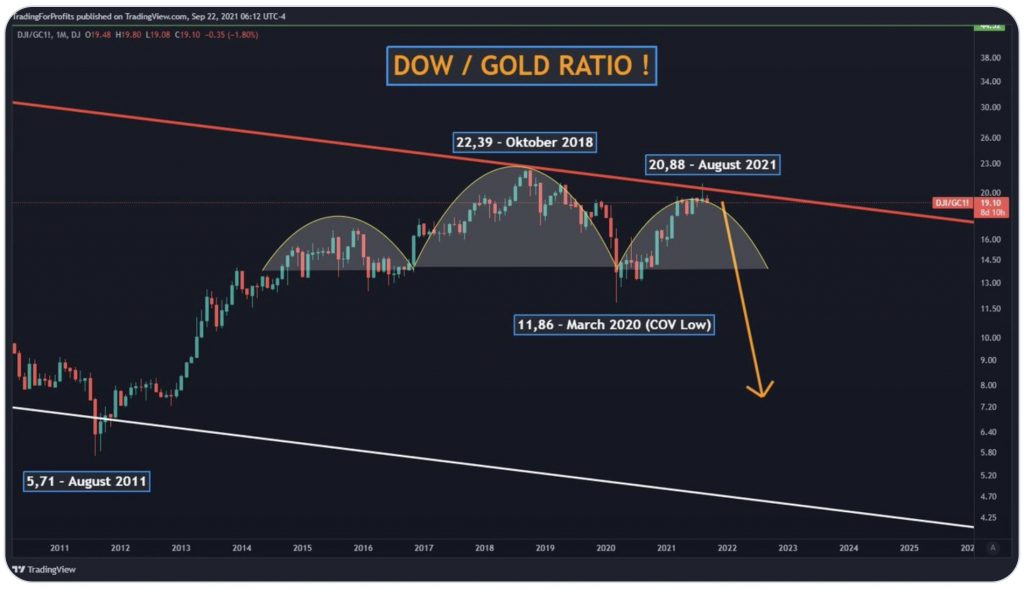 Fed Policy And Shortages
Peter Boockvar:  With widespread labor shortages which in turn is leading to bigger wage increases and pass thru in higher prices along with other widespread inflation, what the Fed should do today (announce the asset purchase trim will start October 1) could be different than what they will do (kick the can to the November meeting for a possible December 1 trim). They could use the debt ceiling excuse even though we know it is ALWAYS increased. They could use the possible fiscal hangover coming soon if all the spending late last year and this year is not repeated but monetary policy doesn’t offset that. They could also blame Delta even though it’s clear we are powering thru it.

Either way, to steal a line from my friend Jim Grant, this is “the Fed’s experiment in capitalism without interest rates.”…

What they also should do is listen to the FedEx earnings conference call to hear what’s going on in the real world with labor costs and prices. We know from Monday that FedEx hiked its shipping rates AGAIN beginning in January and it’s clear that much of it was to offset rising wage bills. From the conference call:

“We estimate that the impact of labor shortages on our quarterly results was approximately $450 million, primarily at FedEx Ground. Labor shortages had two distant impacts on our business. The competition for talent, particularly for our frontline workers have, driven wage rates higher and pay premiums higher. While wage rates are higher, the more significant impact is the widespread inefficiencies in our operation from constrained labor markets.”

So, wages are going up NOT because of faster productivity which is why we are now seeing wage price inflation pass thru.

Trouble In China
Shifting to Evergrande which is giving us at least one day of respite, it was so vague what actually went on last night with this $36mm interest payment on an onshore bond as the company said it “has already been resolved through private negotiations.” Was cash actually paid out? Was it deferred in return for something else? Evergrande does, I believe, have about $15b of cash so a cash payment could have been made but with also about $200b of payables and obligations on unfinished projects, aside from the nearly $100b of debt with about half due within a year, I doubt authorities would have allowed it. They also, I believe, want bond holders to take pain but maybe last night was just an attempt to buy some time. More interest payments, including one to an offshore bond, is due in the coming week. In response to the news, copper prices are jumping by 2.5%, aluminum is at a fresh 13 yr high and iron ore prices are spiking by 15% in Singapore off a 16 month low.

Evidence of little chance of recovery for offshore bonds, let alone what will eventually happen to the onshore ones, the June 28th, 2025 dollar bond is still priced at 24.5 cents on the dollar, down .35 today. The Hang Seng was closed so the equity didn’t trade. The broader question for the Chinese economy for the next few years is not specifically Evergrande, whose unwind will likely happen in some controlled way, but to housing prices generally as so much consumer wealth is tied up in it and not just for living but also as a form of savings in apartments they don’t live in.

Meanwhile In Japan
With the Bank of Japan stuck in a NIRP and QE world seemingly forever, they punted again on doing anything. Kuroda is now almost 9 years in on trying to achieve his 2% inflation target. Instead of looking in the mirror and saying it’s time for a change, he’s just doing what any institutional bureaucrat does, more of the same and double down if possible. The BoJ balance sheet is now 133% of Japanese GDP. 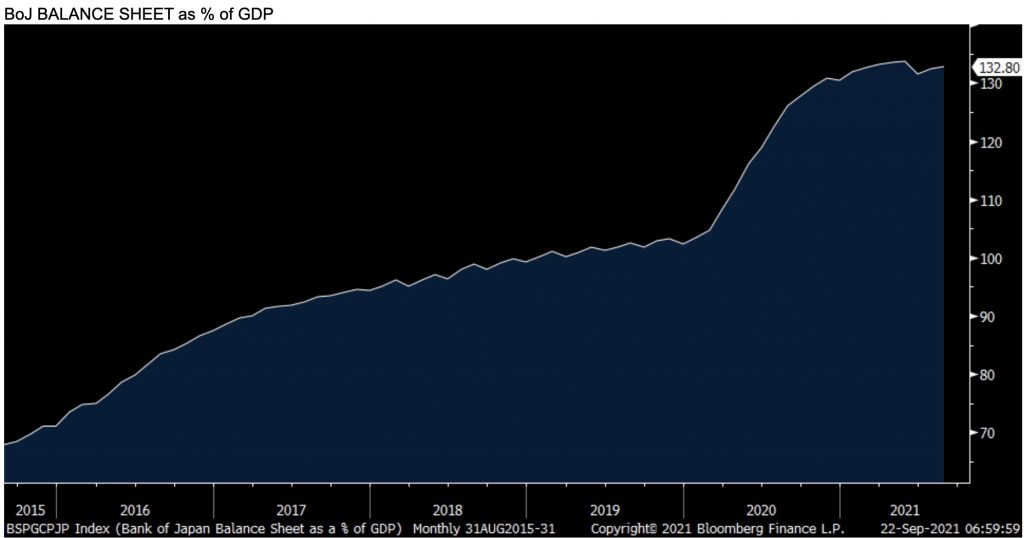 US Housing
Back to the US, mortgage apps were up 5% w/o/w as the average 30 yr mortgage rate held at 3.03% for the 4th straight week. Purchases gained 2.2% after last week’s 7.5% increase but they are still down 13% on tough comps. Refi’s broke a 3 week losing streak with a 6.5% rise but are down 5.3% y/o/y also on challenging comps. We know what’s going on in the housing market so no need to repeat here.