These articles will be published first on King World News each week!

Gold: Fire Insurance for Currencies Already Burning to the Ground
December 3 (King World News) – Matt Piepenburg at Matterhorn Asset Management:  After an extraordinary rally, gold recently entered an anticipated correction phase, which both math and history suggest is about to re-enter a continued trend dramatically upward.

A primary driver for such sustained precious metal strength is an historically undeniable (as well as approaching) paradigm shift toward rising inflation.

When properly understood, the topic of inflation, seemingly academic and even” boring,” in fact becomes rather exciting, as well as predictive, for informed and sophisticated investors.

True Inflation vs. Headline Lies
The great inflation debate continues, with many investors wondering why hyper-inflation has not been the norm given the trillions in fiat currency creation.

Just consider the US money printing in the last 16 years: 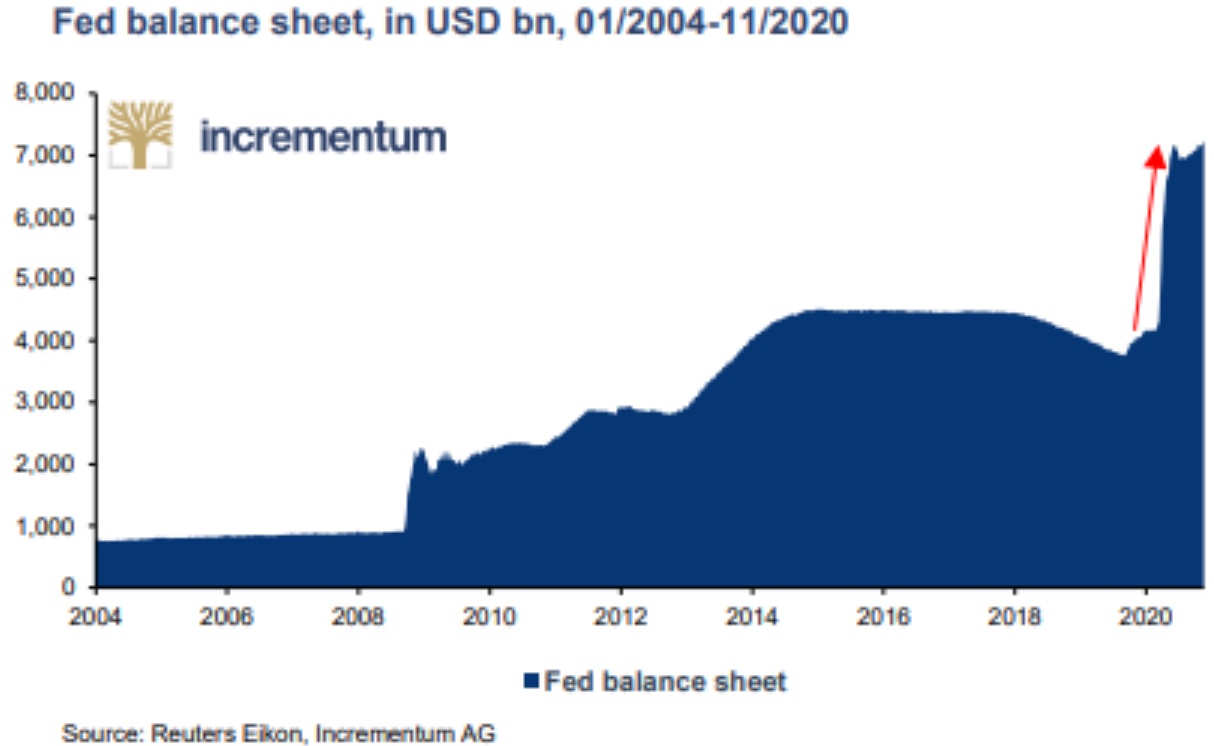 And yet despite such torrents of fake money creation, U.S. inflation has annualized at a reported 2% rate with no “Weimar-like” wheel barrels of inflated money in sight…

In short, many are asking: Where’s the inflation?

Toward this end, it is critical to first distinguish true vs. popular notions of inflation.

From the Austrian School to Milton Friedman, the true definition of inflation has always been understood (and measured) by money supply.

As the supply increases, inflation follows.

The popular/media-driven definition, however, uses consumer prices as measured by such broken scales as the CPI to measure inflation.

A Policy of Dishonesty
Unfortunately, the CPI scale, which has undergone over 20 alterations since 1980, is an openly comical and deliberately inaccurate inflation measure.

It’s akin to a bathroom scale that measures your body weight yet magically omits calories attributed to chocolate, beer, pasta or pizza.

That is, the CPI scale magically under-weights (discounts) medical, housing, energy, education and other key costs—all of which have openly skyrocketed while the CPI rates have “mysteriously” fallen to the floor of history.

This is no accident, as treasury departments and global central banks fully understand that if inflation, as measured by such scales as the CPI, were accurately reported using 1980-based metrics, we’d already be looking at greater than 10% inflation rates today. 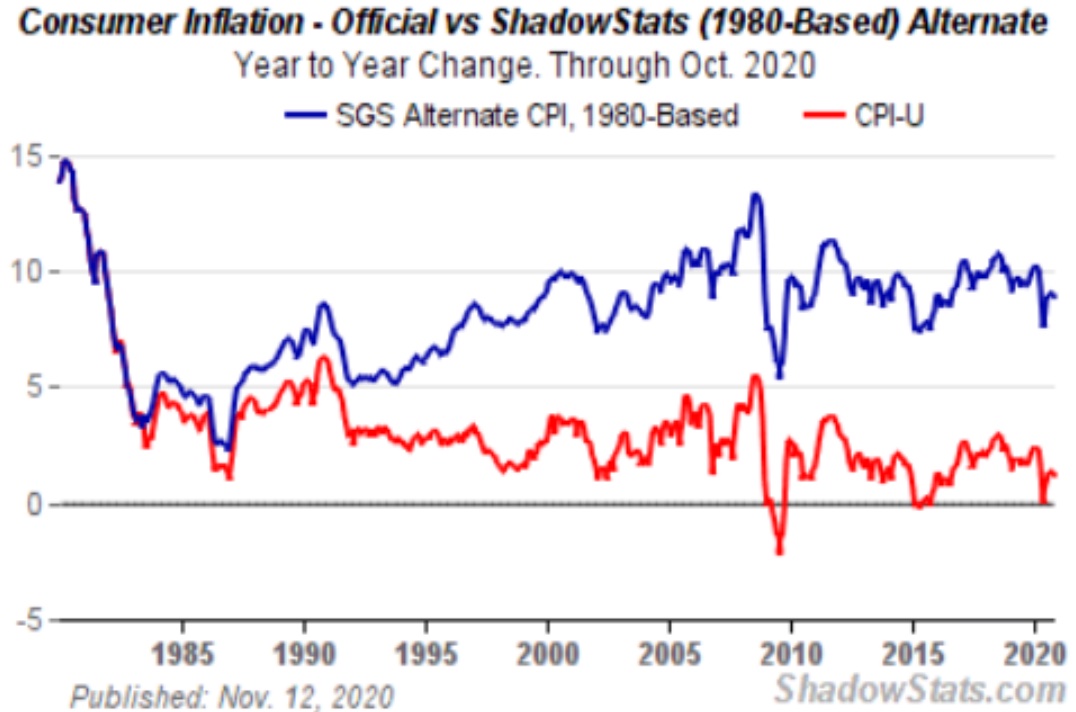 If such truths were honestly confessed, then inflation-adjusted/real return on sovereign bonds would be so openly (and shamefully) negative (i.e. > -8%) that no one would buy government IOU’s.

Of course, that’s a big problem in a now broken world where government IOU’s (i.e. global debt to the tune of 280 trillion) is all that keeps our otherwise Frankenstein economies walking—arms outstretched.

Thus, rather than confess true inflation, the fiction writers at places like the Fed or the Bureau of Labor Statistics resort to a trick which all desperate policy makers inevitably embrace when their experiments fail: They fudge the numbers.

But then again, and as empirically shown elsewhere, the highest offices are not necessarily filled by the highest minds.

Since Nixon welched on the Gold Standard in 1971, policy makers have been acting like college party boys without a chaperone.

They can borrow and spend with money created by a mouse click for the simple reason that it is backed, by well…nothing.

By the end of this year, thanks to unlimited QE (money printing), that ratio will hit 120%.

By the true definition of inflation (above), such desperate money creation can only mean one thing: More inflation.

And More, Well… Lies
Remember, of course, that Nixon had said the dollar’s de-coupling from gold was only a “temporary measure.”

That was 50 years ago and the “temporary” continues… DC and Wall Street continue to party without a golden chaperone.

In 2009, as the Great Financial Crisis (caused by great debt) raged, Fed Chairman Bernanke equally assured the world that such money creation was a purely “temporary emergency measure.”

This too was purely untrue, as over a decade later, Bernanke’s “temporary” and “emergency” policy has since become a policy norm.

Hence the market’s reaction: Party on.

Today, the Fed and the central banks of the world do nothing but print fiat currencies to pay for unpayable deficits and give liquidity to an artificial and historically unprecedented securities bubble.

Enter the COVID Accelerator
COVID and the misguided policy reactions thereto, have only accelerated such insane debt levels and the creation of fake money to pay for it—all of which points to more inflation—namely, the kind that kills currencies and sends gold prices significantly upward.

The vast majority of investors, of course, pay no attention to these creeping inflationary forces and superficially supported risk assets, as they see only one thing: Rising markets riding a wave of fake liquidity over hidden rocks of unpayable debts.

But as we’ve also warned, the vast majority of investors are simply wrong.

But Where’s the Inflation?
That’s still the trillion-dollar question.

As of this writing, inflation in prices has not hit the Main Street (yet bogus) CPI scales, but has gone directly to Wall Street, as the bulk of the fake money printed since the GFC of 2008 went from the Fed to the primary dealer banks, and then to the publicly-traded corporations they serve.

In short, “price inflation” went to places like the S&P, not the deliberately false CPI.

This explains why the DOW and S&P can break new highs as the real economy endures record lows. 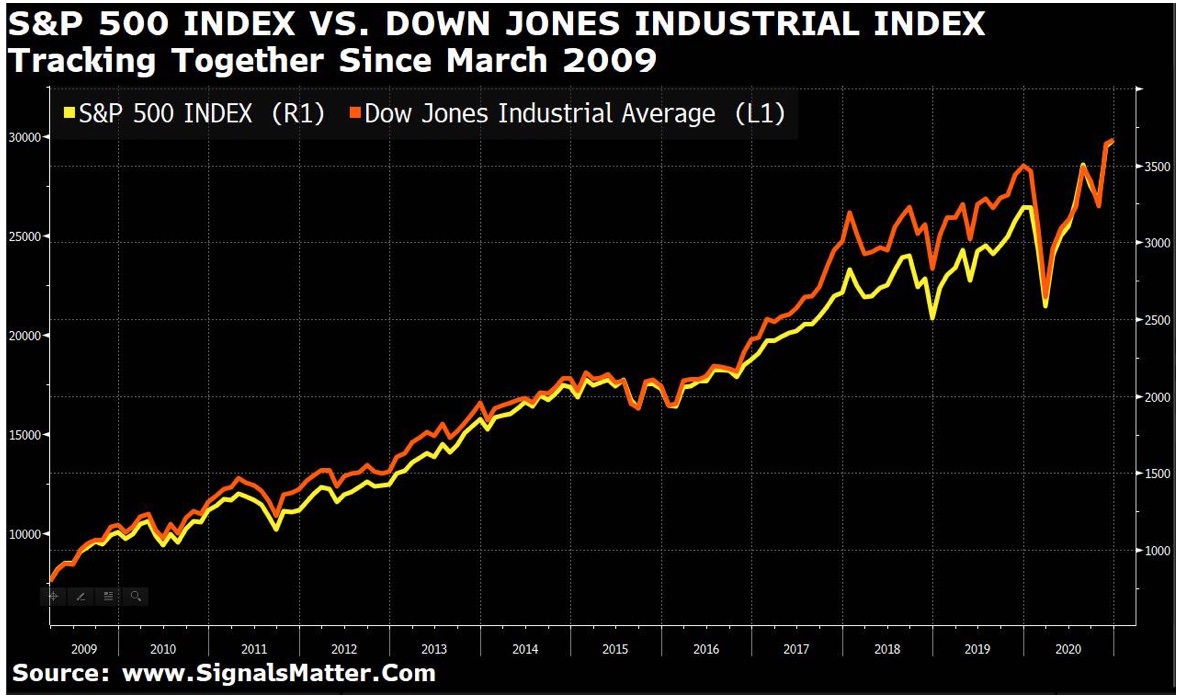 Such artificial risk-asset support in a time of open economic decline is disgraceful—but that’s what central banks do: Support banks and markets, not economies and real-world issues.

Central bank experimentation and market “accommodation” is a direct cause of the growing wealth disparity seen in the U.S. and around the world, and hence explains the populist movements which made the headlines in 2020. 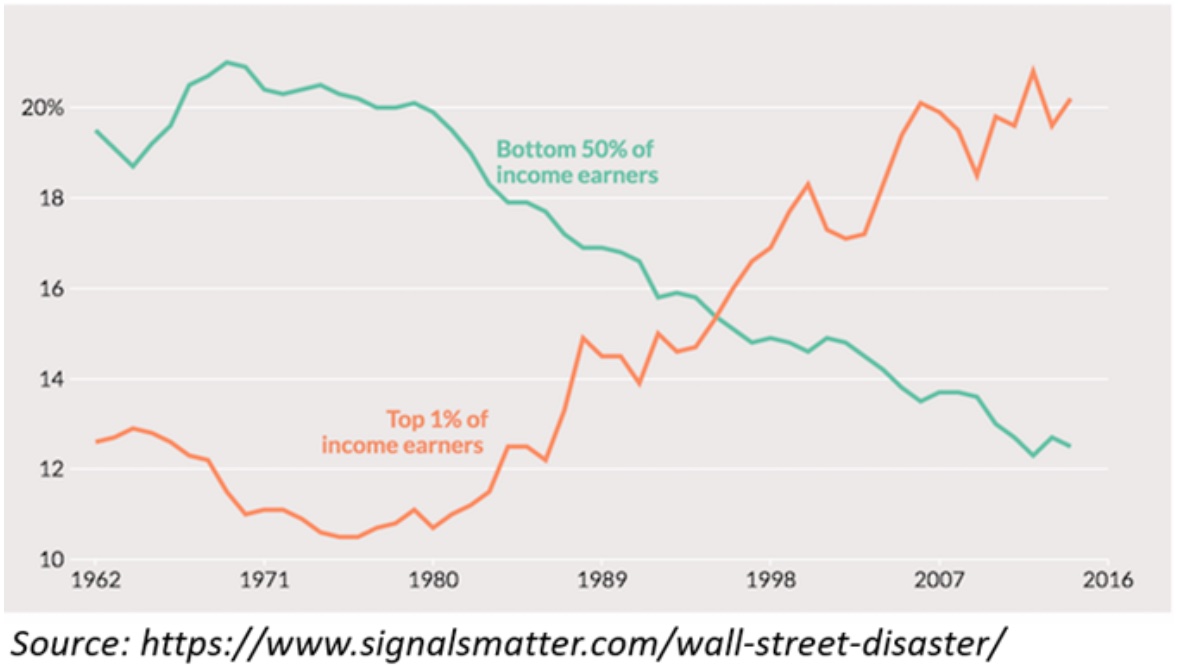 This is due to a fundamental ignorance (or ignoring) of basic economic forces.

That is, for every dollar of printed growth, it takes four dollars of debt. Hardly a good trade.

The U.S. (like the other major economies of the world) are effectively running uphill in roller skates using gobs of debt to essentially churn in place, and then paying for that debt with fiat money.

Does fiat currency creation still seem like a wise, long-term plan to you? 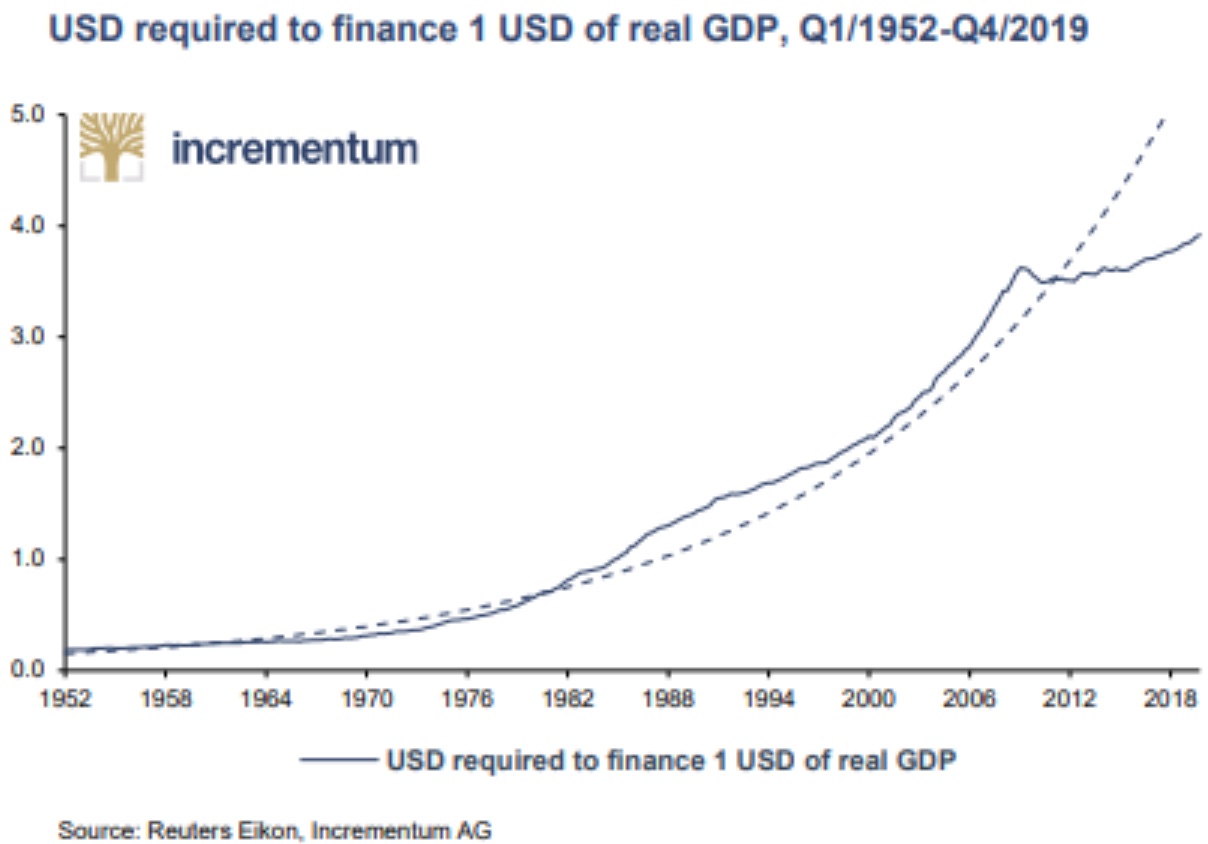 Folks, debt like this can never be repaid. Never.

The Great Paradigm Shift: Inflationism
Now, let’s get back to that elusive inflation question.

Just like families with more debt than income, the best option is to find ways to grow your income.

But as we’ve seen above, that kind of growth just isn’t there for a global economy whose debt to GDP ratio is now well past 3:1.

The kind of economic growth needed to squelch such debt levels requires a near-perfect alignment of debt-free consumer strength, rapid growth in working age populations, massive productivity booms in manufacturing and free trade as well as a central bank providing discipline rather than punch bowls to the markets—none of which is likely or possible today.

The next (and desperate) option, however, is to make one’s currency weaker, inflate the same, and pay yesterday’s debt with tomorrow’s inflated/printed currency, a policy now openly embraced by the Dr. Frankensteins at the Eccles Building in D.C.

Thus, despite years of deflationary headlines and yield-curve controls by experimental central banks, inflationism is slowly (and I mean SLOWLY) becoming the new paradigm right under our noses.

As debt levels soar, fostering massive pricing bubbles in stocks, bonds, commodities and real estate, we are seeing the classic pattern of boom leading toward “uh-oh” and, in turn, a final shift toward rapidly rising inflation and hence rapidly declining currency valuations.

Gold’s Moment of “Ahhhh.”
In the current paradigm shift, gold will rise not because gold only rises in inflationary periods (after all, gold recently hit new highs in an openly deflationary global setting).

Instead, gold will rise simply because currency purchasing power will tank (and is already tanking) as inflationism progresses from a slow trot, to a cantor and then to a full gallop.

That is, gold will rise because currencies (diluted daily via money printing) are falling by the second. This is not an opinion, but a mathematical certainty.

Like Picket’s charge at Gettysburg, currencies are marching straight into a deadly (i.e. inflationary) cannon barrage.

One look at the recent rise in gold prices, for example… 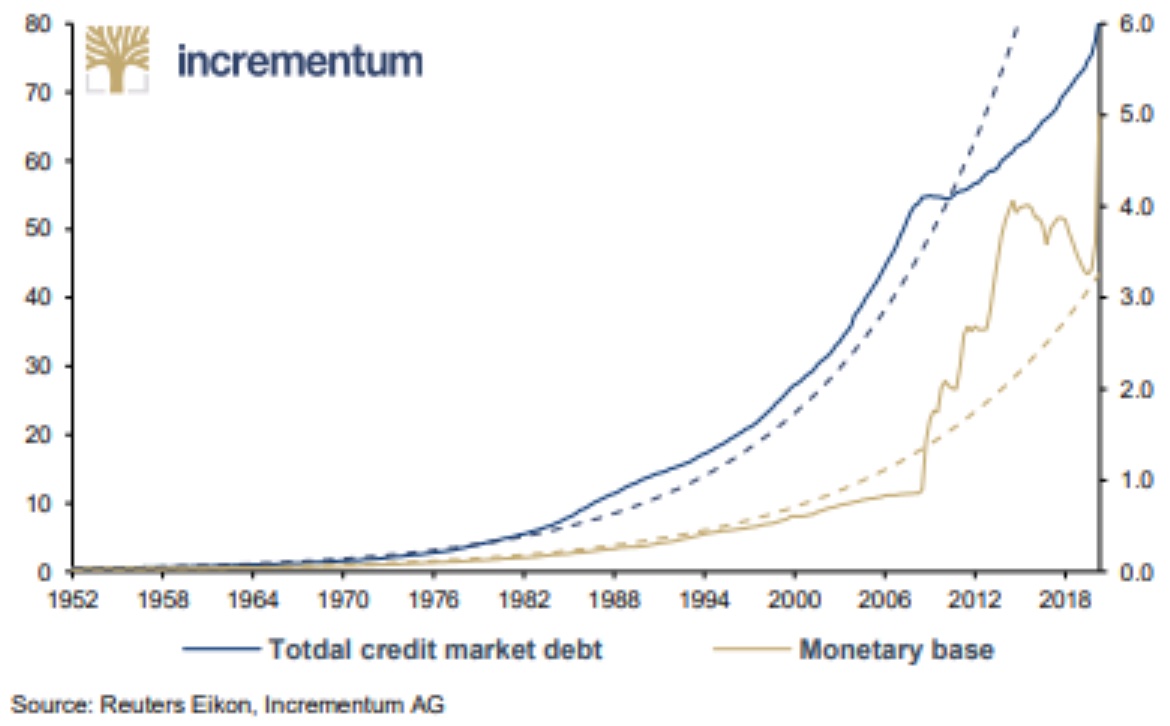 …is literally nothing more than taking a chart of the dollar or euro’s purchasing power and turning it upside down, like this: 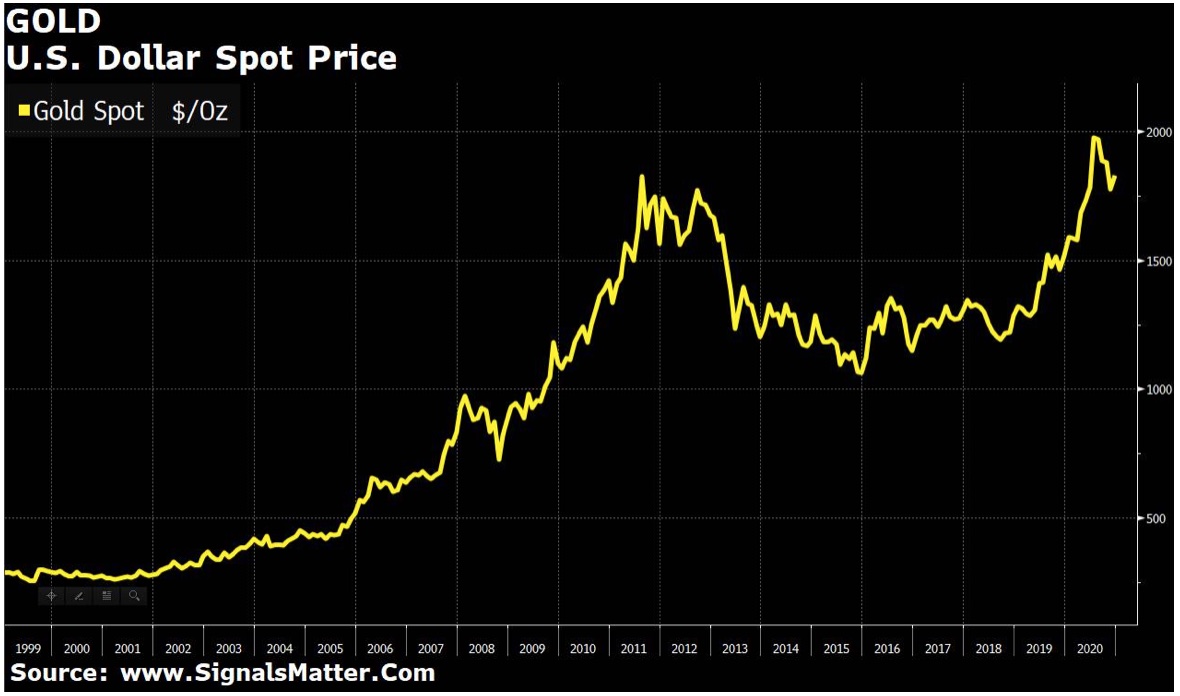 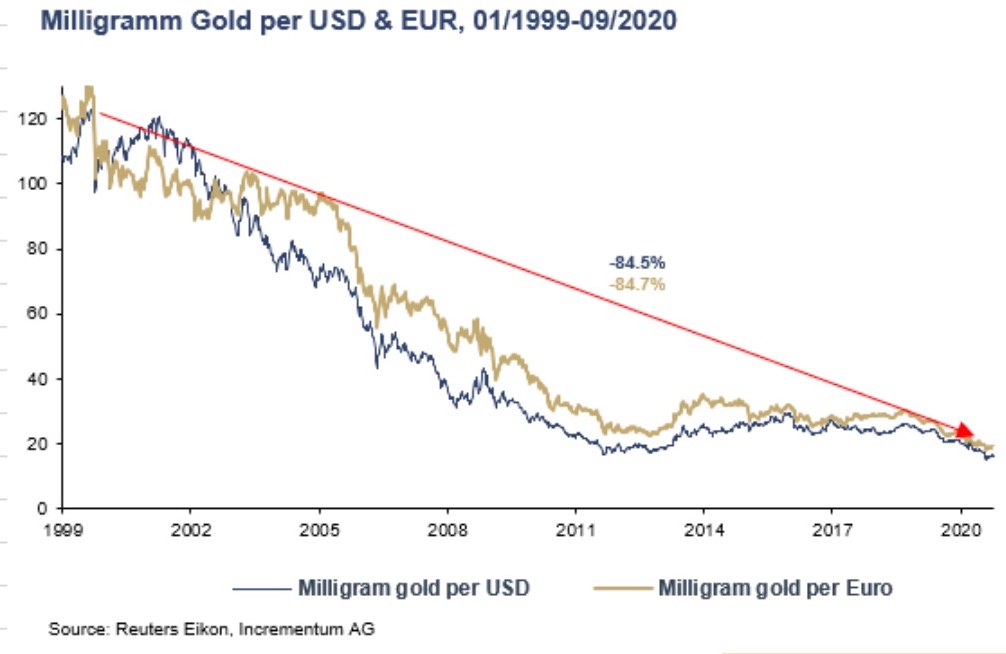 They are not nervously day-trading in and out of gold price fluctuations subject to extreme, near-term volatility and “spoofing” in the paper-gold trade (for which banks like JP Morgan and Scotiabank are paying massive, $100M+ penalties).

Informed investors hold gold because the dollars and euros in their pockets, banks and markets are getting weaker by the second, regardless of the amounts listed on their ledgers, statements and portfolios.

Or stated even more simply, gold is their fire insurance for a currency that is already burning to the ground…For those who would also like to read fantastic articles from Egon von Greyerz CLICK HERE.

Also just released! Multi-Billionaire Hugo Salinas Price Says President Trump May Use US Military To Remain In Power And Declare Himself Winner Of Election CLICK HERE TO READ.