On the heels of gold and silver moving higher along with the dollar and the Dow tumbling, here is a reminder from one of the greats in the business, John Hathaway, that discusses the deepening shortage of physical gold.

King World News note: The information below is part of an extremely powerful piece that John Hathaway released earlier this quarter:

By John Hathaway, Tocqueville Gold Fund
June 10 (King World News) – According to the World Gold Council, the current investment allocation of world institutional portfolios to gold is a miniscule .55 percent. The flows resulting from a return of investment interest in gold for hedging purposes only, and in the best of all possible worlds (robust economic growth, world peace, etc.), would seem to have a potentially powerful impact on gold prices.

There Is a Deepening Shortage of Physical Gold
The outlook for future gold mine production is clouded by the roughly 40 percent decline in gold prices over the past five years. This decline has hobbled the gold mining industry in such a way that we expect the supply of newly mined gold to plateau at current levels in a best-case scenario, or decline by as much as 25 percent by 2020 in the absence of a sustained rise in the gold price of at least 50 percent. The reasons are discussed in detail in our website article “Synthetic Gold: Utopia for Alchemists.”

In addition to the dim prospects for increasing mine supply, the liquid inventories of physical gold vaulted in western financial centers (London, NY, and Switzerland) have been severely depleted by demand from Asian investors. As documented in our website article “Synthetic Gold” (1/7/2016), the “float” of easily accessed allocated physical gold has declined by approximately 67 percent since 2011. Much of the gold that has moved to Asia will not return to circulation in the absence of a sustained move higher. That is because it has been refined into levels of purity and bar shapes favored in Asian markets that are not readily accepted in Western capital markets. The chart below shows the 67% decline in private vault holdings. Central bank gold held at the Band of England is not in play for purposes of this discussion. 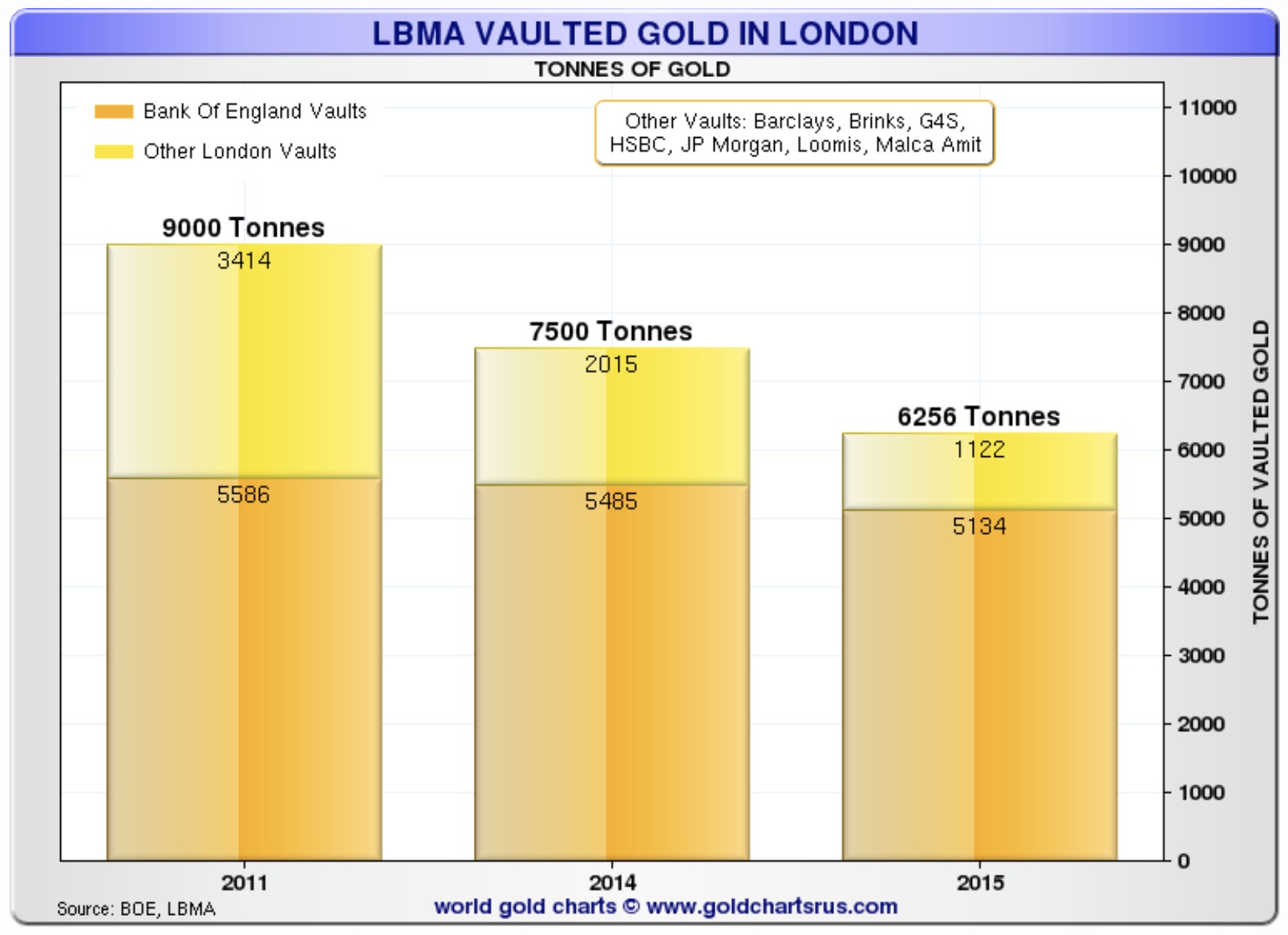 Resurgence in the current negligible investment interest in gold by Western investors will most likely be expressed in the form of capital inflows into gold ETFs such as GLD. In the first quarter, inflows into GLD were 5,687,970 Troy ounces, the highest since 2010, 18 months prior to the run-up of gold prices to all-time highs. GLD and other similar synthetic instruments are required by charter to have 100 percent backing by physical metal.

A continuation of first quarter strong inflows into gold-backed ETFs seems likely to exert a powerful marginal impact on gold prices. We estimate the demand for a 1-percent increase in gold allocations (from .55 to 1.55 percent) would equate to 56,075 tonnes of gold (chart below), much more than exists in the known float. Under this reallocation scenario, the scarcity of physical gold will most likely generate capital flows into synthetic instruments such as derivatives, structured notes, managed futures, and options, all of which entail high levels of fees and introduce heightened and varying levels of counterparty risk. However, investor scrutiny of these arrangements will in our opinion intensify in a rising gold-price environment. Substitutes for allocated physical gold will become decreasingly acceptable, leading to a scramble for the real thing.

Conclusion
We believe that the stage is set for powerful new advance in gold prices…We believe that a decline in financial-market asset values is all that is needed to destroy whatever fragile confidence remains in paper currency and present-day financial conventions. Such a decline could come about for many reasons and at any time due to the buildup of systemic risk.

…We continue to recommend exposure to physical gold and gold mining stocks, which would be the prime beneficiary of a renewed advance in precious-metals prices. Despite their substantial rally in the most recent quarter, we believe that gold mining equities remain severely undervalued long-term options on the potential increase in the gold price that we foresee. ***KWN just released an absolutely jaw-dropping interview discussing the gold and silver markets with the man who advises the most prominent sovereign wealth funds, pension funds, hedge funds, and institutional funds in the world and he discusses the gold and silver markets, coming chaos and much more! To listen CLICK HERE OR ON THE IMAGE BELOW.

Central Banks See Massive $2.2 Billion In Losses On Gold Shorts, But Here Is Why It May Get Much Worse